How to Choose a Livestock Guard Dog - Modern Farmer
Animals

How to Choose a Livestock Guard Dog

Not just any dog has the instincts for the job. Dedicated, wise, and noble, LGDs are less a pet than an independent contractor. 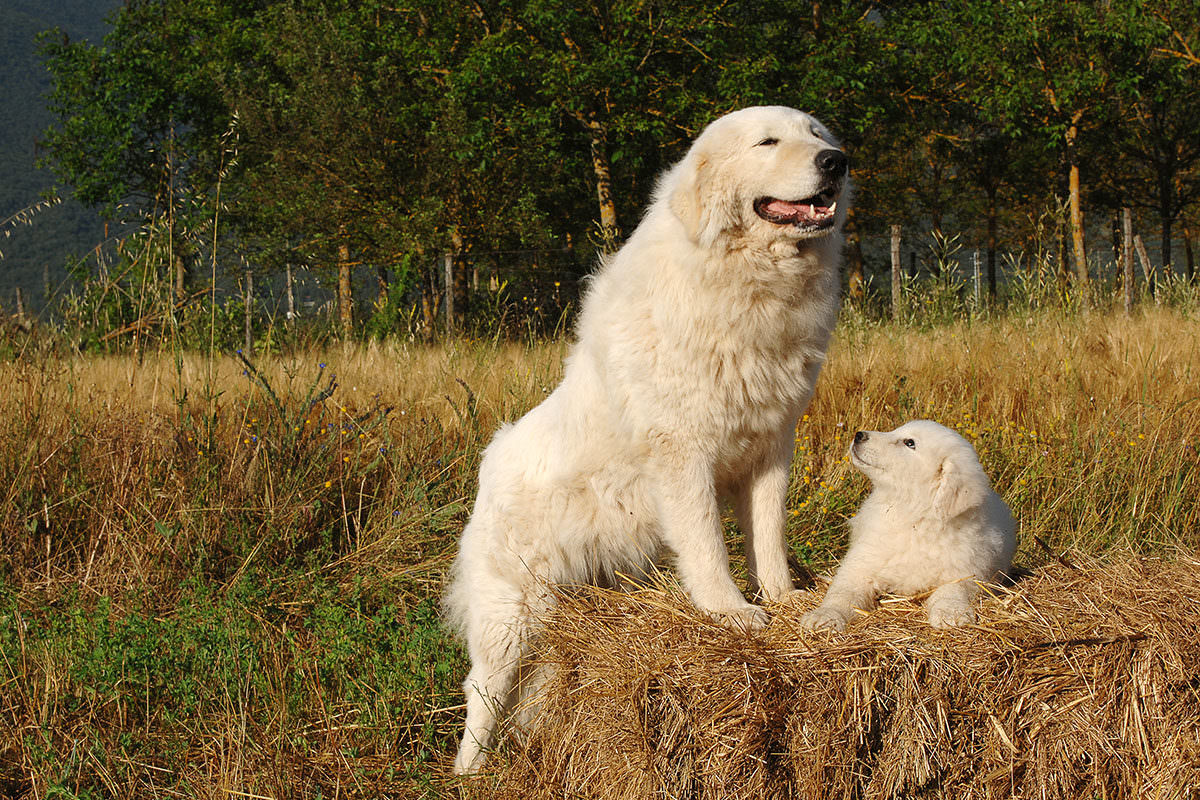 Besides sturdy fencing, guard dogs are the primary tool to prevent such horrors, not just with sheep, but goats, calves, chickens, ducks, and any other livestock small enough for a predator to take down. But it’s more than your four-legged coyotes, foxes, bobcats, wolves, and mountain lions you have to worry about, hawks and other birds of prey can easily nab poultry, even in urban areas, as can raccoons, skunks, and weasels.

Livestock guard dog (LGD) breeds are generally large (over 100 pounds), and while they may be devoted and friendly with their human owners, they are often unfriendly with other dogs. (A good canine guardian will also keep stray dogs – not to mention your neighbor’s mischievous cockadoodle – at bay.) LGDs are true work animals, and they cannot double as a traditional family pets if they’re expected to do their job. They have evolved a specific combination of traits that few other breeds possess: the ability to live outdoors year-round; a willingness to not harass, or kill, livestock, even when hungry; a highly developed sensitivity to livestock behaviors; and a skilled approach to detecting and deterring predators.

Below are the LGD breeds most common in the U.S., though another dozen comparable breeds are available, too. All are suited for guarding virtually any type of livestock. There is no need to look for a purebred – many farmers find that offspring of two LGD breeds combine the best qualities of each. For protecting small livestock, such as poultry or rabbits, in which case the dog is typically kept outside the fence that contains the animals, non-LGD breeds may be suitable as long as they can be trained to live outdoors. 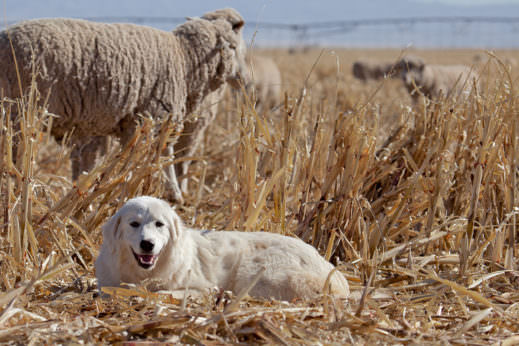 A Great Pyrenees guarding sheep in a field. By Ingrid Curry/Shutterstock.com

Great Pyrenees
These noble, independent, highly intelligent dogs are perhaps the most widely used LGD in America. Originally bred by the Basque in the mountains between Spain and France, they excel in wide open spaces; in small pastures, they may be tempted to dig out of fencing to satisfy their urge to roam. They do not accept vocal commands as readily as other breeds, but they’re considered more friendly with humans. Note: Great Pyrenees’ thick coat makes them a poor choice for hot, humid regions. 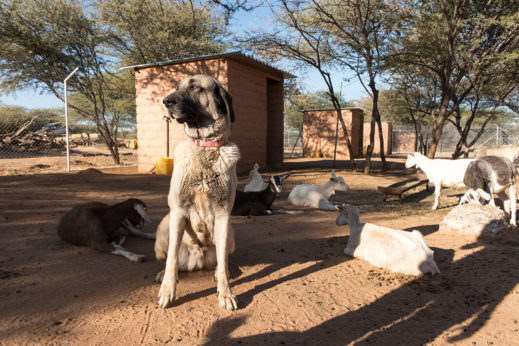 An Anatolian Shephard guarding goats in Namibia. By Bobby Bradley/Shutterstock.com

Anatolian Shepherd
This breed is muscular, imposing, and reserved in temperament. Originally from the mountains of Turkey, these dogs are unmatched in their devotion to the herd, but may not be particularly friendly toward humans. Some individuals may even dislike petting. Historically, Anatolians were often left alone with livestock for extended periods. They are capable of withstanding hot weather. 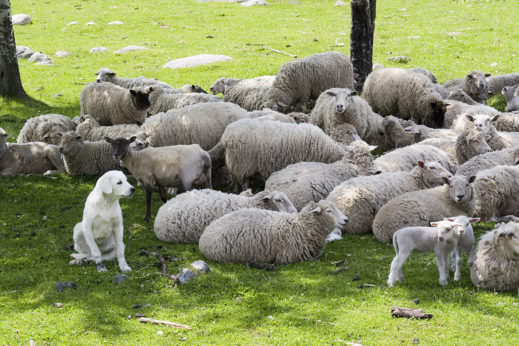 Akbash
Another Turkish breed, Akbash are all white, but vary considerably in hair length (one to eight inches) and build (both slender and stout individuals may be found). They are a bit smaller on average than most other LGDs, however. 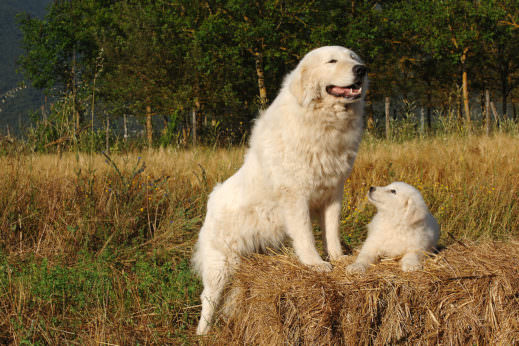 A Maremma sheepdog and puppy. By Ricantimages/Shutterstock.com

Maremma Sheepdog
Also referred to as Marremmano, this breed originated in the hills of central Italy and is quite small for an LGD (typically under 100 pounds). They are fiercely loyal to the herd, but fairly aloof with people.

Finding a good LGD is completely unlike finding a good pet, where it’s easy to find a lovable mutt from the local shelter who will readily befriend you for life. The best places to start are breed associations websites. These typically provide a list of reputable breeders across the country; don’t be shy about asking for references if there’s any doubt about their credibility. Another option is to contact farmers who own LGDs to see if they are selling puppies, or perhaps even a mature, trained animal that you can see in action prior to purchase.

The key is to find breeders that focus specifically on working animals, not show animals or pets – many LGDs are sold for the latter purposes, but you want a dog from a bloodline with proven guardian dog instincts. If possible, purchase a dog that has been raised by a working LGD among livestock, preferably the same species that you intend for it to work with. At the very least, the seller should be able to provide some evidence that the animal is descended from working dogs.

Avoid “bargains,” as there is usually a reason, whether poor health, undesirable temperament, or lack of training. You can expect to pay a minimum of $500 for a puppy and $1000 for an adult, and twice that for some of the less common breeds. One LGD may be all you need”“the livestock serve as their companions – but two or more are necessary for large herds on open ranges. If you have multiple herds kept in different locations, you’ll need at least one dog per herd.

Establishing the Dog with the Herd 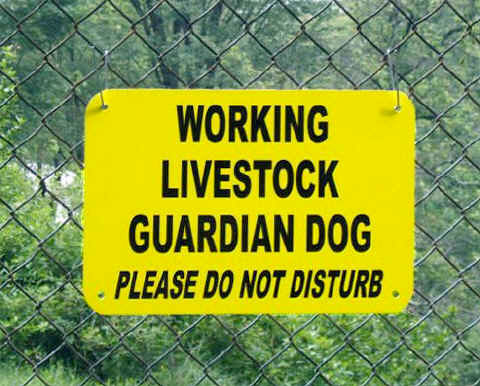 This sign, available from Anatolian Shepherd Dogs International, helps people know that your guard dog is working and not to be bothered.

If you purchase a puppy, wait to bring them home until they are about two months old and then place them immediately with the livestock so they can start the bonding process – they must live with your livestock, not with you, from day one. It’s important to socialize LGDs with humans, as well, but it’s best to keep human contact to a bare minimum for the first couple of months.

The good news is that there is no need to train the dog to guard the herd – either they have the instincts or not. But don’t expect them to do much guarding during puppy-hood (they will want to play with the animals at first). Look for the protective instincts to kick in at around six months of age; they will continue to develop until the dog reaches adulthood at about two years. If a young LGD play-chases their livestock companions too aggressively, use verbal reprimands to discourage the behavior.

They will need a rain-proof dog house with soft bedding, such as cedar shavings. Sturdy fencing is critical on farms where the livestock are not roaming large, open ranges, as most LGDs instinctively want to patrol a large territory. The same fencing that contains your livestock may not do the same for your dog, who can dig and jump (electric fencing is often an effective deterrent for both, however). Post signs that say “Working Livestock Guard Dog – Do Not Disturb” along the fence line to warn passerby not to approach the dogs.

As a final note, expect a lot of nighttime barking – that means your LGDs are doing their job. But think twice before using LGDs where neighbors are in close proximity.

I have to say after over 20 years working with LGD I will disagree on a few points made in the in the comments. Breeds denote dog types that have had reduced genetic diversity. Breeds tend to be bred to a standard and often as pets. I would strongly suggest you chose a dog type that is a landrace and NOT bred to any standard other than its working ability. Mixing “breeds” might be the best way to add genetic diversity to both lines and if the mixes are within the LGD dog type. Done this way you have nothing… Read more »

Never let LGD puppies play with livestock. Never let them chase livestock. Supervise their interactions closely, and separate them from livestock (as in a kennel enclosure in close visual contact with the livestock) when you cannot supervise them. Otherwise, you may find your puppies have been harmed by the livestock, or vice versa. Also, you may end up with huge adult dogs who think it’s OK to romp with the livestock, which may result in injuries to or death of livestock. Finally, it’s a myth that you or members of your family shouldn’t bond with LGDs. LGDs can bond with… Read more »

I find the dogs that are more social than working in their personalities I sell for pets instead of farm dogs. The problem I have is farm working dogs and city folks that think they should be inside during cold ,snowy weather.

Do your homework. We have been using guardians for several years successfully. We have our dogs with goats but they will work with what ever they imprint on as as a pup. We raise and sell purebred maremmas in swan river Manitoba canada. Talk to breeders or producers that have had success. A good breeder should happily answer your questions.

I have a concern about a LGD harming a family pet (I have dachshunds) or the neighbor’s dogs ( who is my sister, and she breeds beagles, she has said that she might need a LGD to keep her beagles safe). We have been having issues with Mountain Lions, coyotes and wolfs ( some of these dogs are hybrids mixed with wild domestic dogs) coons, human trespassers, some prey birds, Living in the southern heat and my familiarity with the Mountain Curs, I’m thinking that they are a great option for a couple of them. I’m just concerned that they… Read more »

Is there any Livestock guard dog that will react to a wireless exterior fence boundary? I have many small fenced areas with chickens, ducks, rabbits and soon goats. I want one dog to patrol the outer perimeter of this – but it is cost prohibitive to securely fence it all in. Just wondering if I have to wait for the secure fencing or if an invisible fence could work for any breed?

I’m curious why The Pyrenean Mastiff was not mentioned??? They are world rated #1 LGDs.

What is the best guard for alpacas? I was also considering a Llama that I’m told are also good protectors. I’m looking to start will only about five but expect the herd to grow. What breed dog do you recommend?

Looking for a LGD in AZ. We are on a ranch that is known to have mountain lions around quite frequently, as well as other predators (bobcats, bears, Fox, etc). Our temps can get up to about 105, where we are and lows around 20. We have sheep, llama and multiple fowl including peacocks. Please let me know if you have any trained adult dogs you’d like to sell, or pups that can handle this environment and workload. Thank you in advance!

Looking at working livestock guard dog’s for sheep and cattle