A Kernel of Truth: Why Biofuels May Not Be Better - Modern Farmer
Lifestyle

A Kernel of Truth: Why Biofuels May Not Be Better 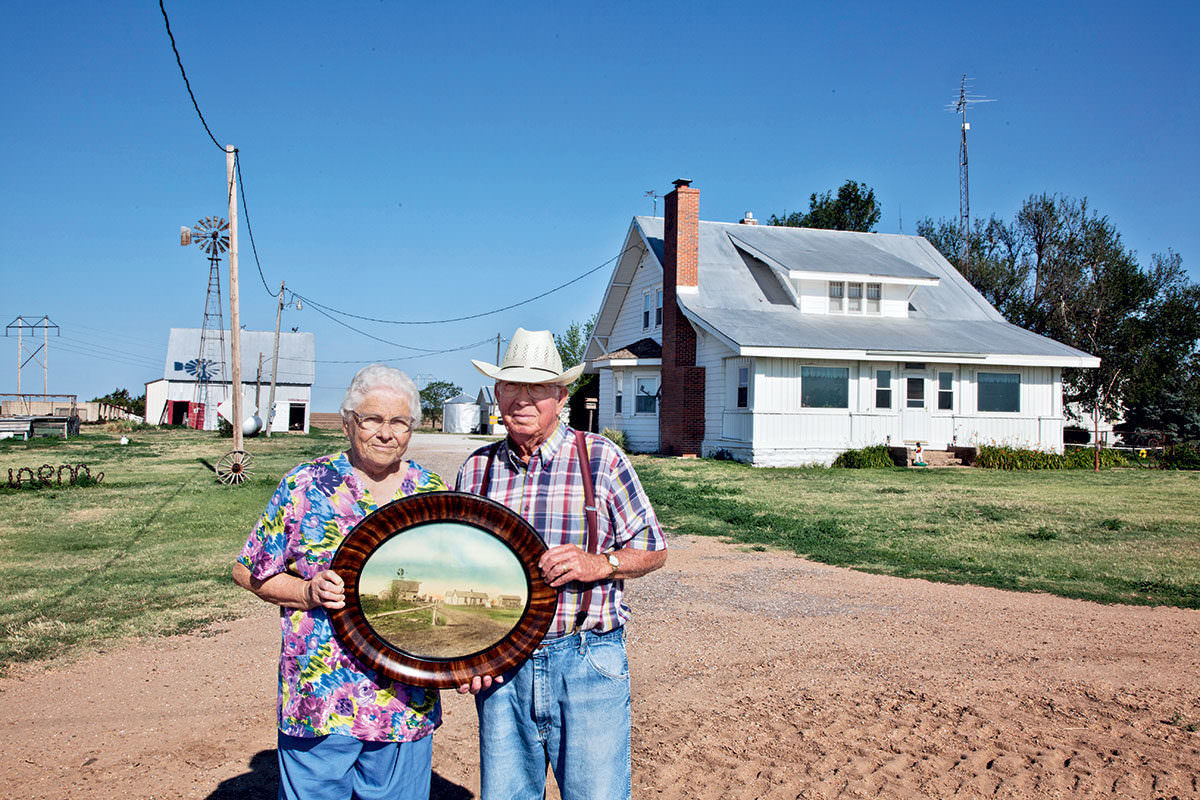 Larry Schwarm shot this photograph of his parents, Pauline and Laurence, six years ago. In it, the couple clutches a framed 1912 image of their homestead. Laurence, who passed away in April, inherited the farm from his father.
Share
Tweet
Pin
Email
387 Shares 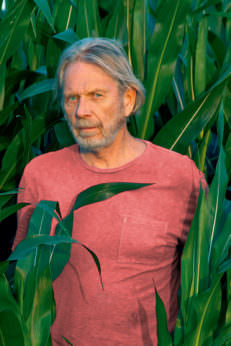 LARRY SCHWARM, 73, grew up on 320 acres in Greensburg, Kansas. Back when he was still a kid, his parents farmed wheat to pay the bills and raised enough produce and livestock to feed their three sons. “We had pigs, cattle, sheep, chickens, geese, ducks, goats, you name it,” remembers Schwarm.

Things are different now. Fifteen years ago, the family began renting their land to a massive corn and grain outfit, a typical response to the Midwest’s increasingly industrialized agricultural economy. Since Schwarm’s 1950s childhood, the number of farms in Kansas has decreased by half, while the average size of each has doubled – a rate of consolidation that comes at the expense of community. “Small towns are dying,” says Schwarm, a photographer who currently lives in Wichita. Yet he keeps coming home to train his lens on the ever-changing landscape of his youth. “Western Kansas,” he reports, “has become a giant deprivation chamber.”

Any loyal reader of this magazine knows that corn is the most widely cultivated crop in the United States, and that very little of it is consumed by us (9 percent if you count beer and sweeteners). You might, however, be surprised to learn that nearly 40 percent of the harvest goes toward ethanol fuel. In 2005, Congress passed the Renewable Fuel Standard, mandating annual increases in gasoline’s biofuel content. At the time, the notion that our country’s thirst for foreign oil could be slaked with low-emission fuel made from homegrown corn and other plants seemed like a win-win for everybody, except, perhaps, the oil and gas industry. American farmers reacted swiftly, devoting an additional 15 million acres to corn in the season following the legislation’s enactment, and within eight years, the price per bushel nearly quadrupled.

Nearly 40 percent of our corn harvest goes toward ethanol fuel.

So just how eco-friendly is biofuel? Industry groups like Get Ethanol say that grain-based ethanol can reduce carbon emissions by at least 43 percent, on a unit-to-unit basis, compared with petroleum gasoline. These advocates downplay the fact that cars get fewer miles per gallon on E10 (the 10 percent ethanol blend widely sold today). Detractors counter that farming corn for fuel actually expands our nation’s carbon footprint, once you add up all the tractor diesel, fertilizer, and electricity required to pump irrigation and power distillation plants. While quantifying those factors isn’t an exact calculus, Jeremy Martin, a senior scientist at the Union of Concerned Scientists’ Clean Vehicles Program, considers a 20 percent reduction to be a reasonably accurate estimate of ethanol’s carbon savings. He also argues that the benefits must be weighed against the environmental assaults compounded by such a needy crop: massive soil erosion, loss of habitat and biodiversity, the ongoing depletion of the Ogallala Aquifer, and the giant “dead zone” in the Gulf of Mexico resulting from fertilizer runoff. “Growing more corn intensifies these problems. There are better options,” says Martin.

The policymakers who drafted the Renewable Fuel Standard understood as much, and hoped that incentivizing the industry with tax credits and subsidies would pave the way for biofuels based on less demanding plants, including algae and native switchgrass. Turning these feedstocks into fuel presumed advancements in “cellulosic” biofuel technology.

The original legislation called for 3 billion gallons of cellulosic biofuels to be produced annually by 2015, a standard that has been continually revised downward. At present, there are only two commercial-scale cellulosic plants in operation, with a combined capacity of about 50 million gallons per year.

It’s tough to point a finger at the farmer. Lon Frahm, a Schwarm family friend, grows corn on nearly 80 percent of his 30,000 acres in Thomas County, Kansas. He wishes that weren’t the case. “I would love nothing more than to be able to rotate crops, but corn is the only way for me to make money here,” says Frahm, who already employs no-till practices. For him, monoculture holds a few obvious advantages: “I don’t have to change planting and harvesting equipment all the time. And I only need 10 employees to run the whole operation.”

Schwarm’s father, Laurence, passed away in April at the age of 93. So the photographer headed to Greensburg to move his 91-year-old mother, Pauline, into a smaller house, and spent a few nights in his childhood bedroom. “I’d wake up at two in the morning, and I could hear engines going. The operation that rents our land buys diesel by the tanker truckload,” Schwarm says. “My dad was born in that house and he died in that house. Farming was all he ever did, but he wouldn’t make it today on only 320 acres.” 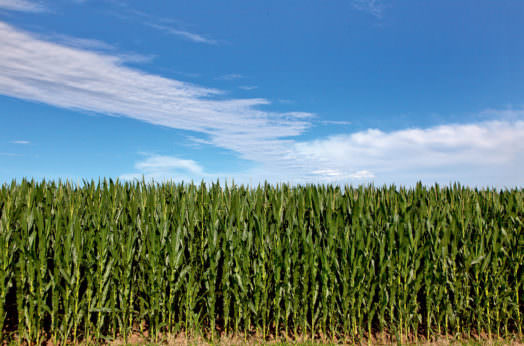 The Schwarm family lease their 320-acre farm in Greensburg, KS, to a massive corn and grain grower that maintains more than 25,000 acres throughout the state. 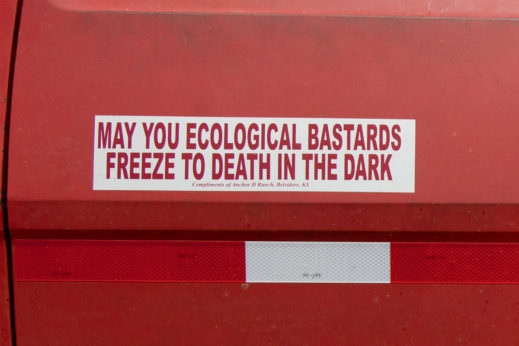 A Kansas rancher’s bumper sticker summarizes his view of environmentalists. 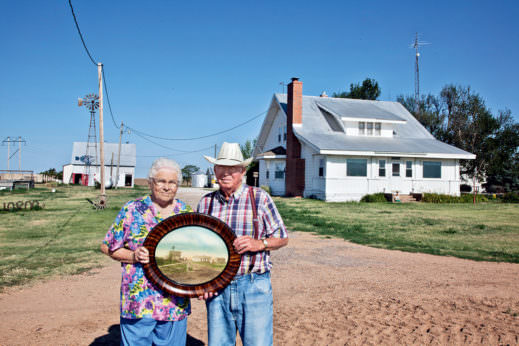 Larry Schwarm shot this photograph of his parents, Pauline and Laurence, six years ago. In it, the couple clutches a framed 1912 image of their homestead. Laurence, who passed away in April, inherited the farm from his father. 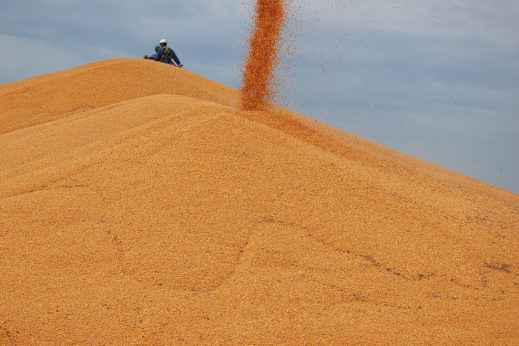 A 30-foot-high mountain of corn piles up at the ADM-Collingwood grain elevator in Cullison, KS. 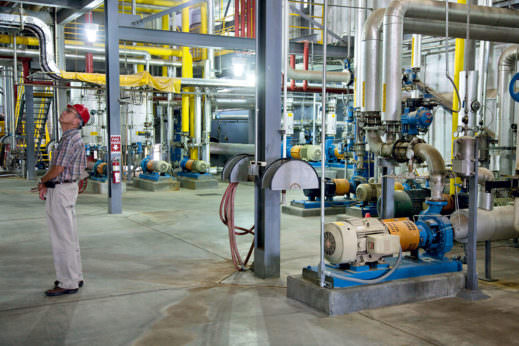 A supervisor examines equipment at the Oakley, KS, plant of Western Plains Energy, which produces 50 million gallons of ethanol annually. 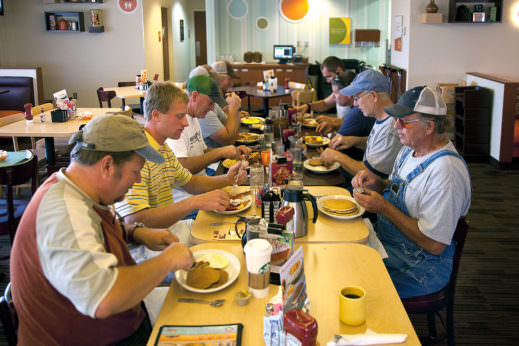 Every morning, Lon Frahm (far left) sits down for breakfast with the team who helps him farm 30,000 acres in and around Colby, KS – 80 percent of them devoted to corn. 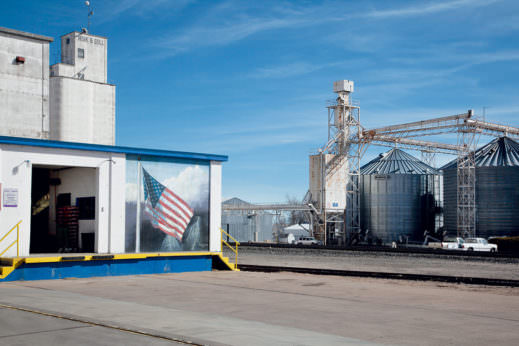 Irsik and Doll’s loading dock – sporting a Stars and Stripes mural – faces of with a Dodge City Co-Op grain elevator in Cimarron, KS. 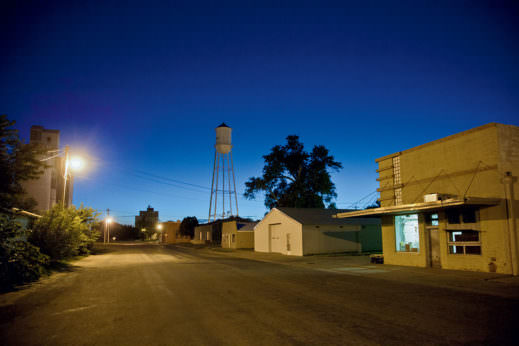 This is what Saturday night looks like in Wilson, KS. The town has lost 25 percent of its population since 1980.