How to Keep Honeybees

These imperiled pollinators perform an estimated 80 percent of all plant pollination. Keep them buzzing by following our simple guide. 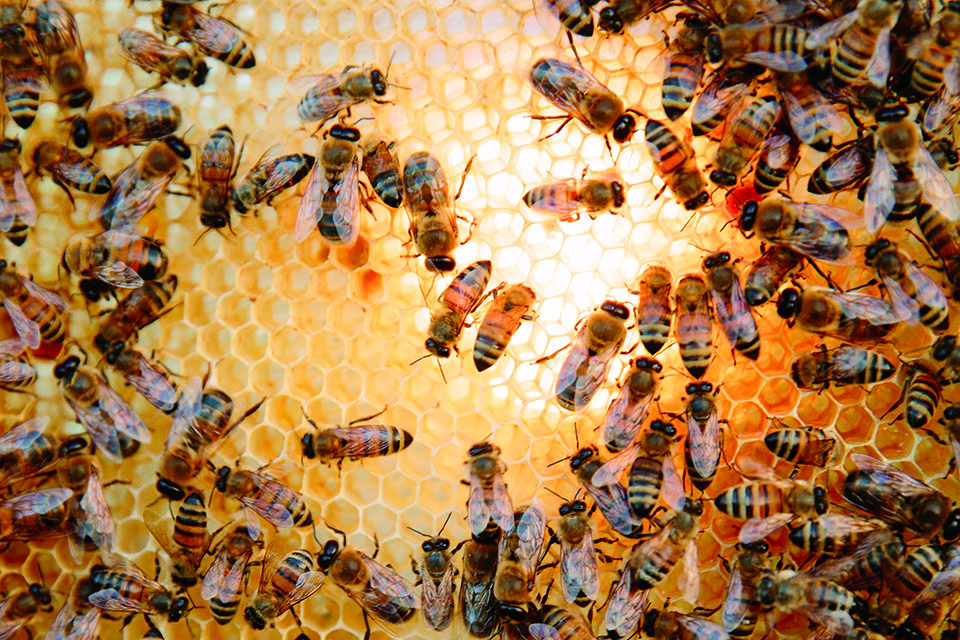 The hive's female worker bees congregate with a few drones on a cross-section of comb that has yet to be filled with honey.
Share
Tweet
Pin
Email
532 Shares

Meanwhile, U.S. citizens have taken up the cause, establishing hives in backyards, atop roofs, at restaurants, even on the White House lawn. It’s no wonder people get hooked – bees are unbelievably interesting creatures. Ready to join the backyard beekeeping revolution and help keep pollinators buzzing? Here’s our guide.

“What bees can do together is mind-blowing,” says Dan Carr. Previously the apiarist at Stone Barns Center for Food and Agriculture in New York’s Westchester County, Carr owns Beavertide Bee Farm in Falls Village, Connecticut, where he manages 38 hives. “A single worker bee produces about a twelfth of a teaspoon of honey in her lifetime,” Carr says. “That’s twelve bees per teaspoon. But a healthy colony might produce up to 200 pounds of honey in a year.”

As the math implies, one colony can contain an astonishingly large population – up to 100,000 bees per hive – comprising what biologists E. O. Wilson and Bert HÁ¶lldobler labeled a “superorganism,” namely a huge group of individuals, each with limited information, that functions collectively as a well-oiled machine. (Thus the phrase “hive mentality.”)

Worker bees account for more than 90 percent of a colony’s population and perform most of its duties. These infertile females feed and clean the queen bee; care for developing larvae; make beeswax; fan their wings to maintain a comfortable temperature inside the hive (at least 90°F year-round); and gather water, pollen, and nectar to create honey, the colony’s sole source of sustenance come winter. 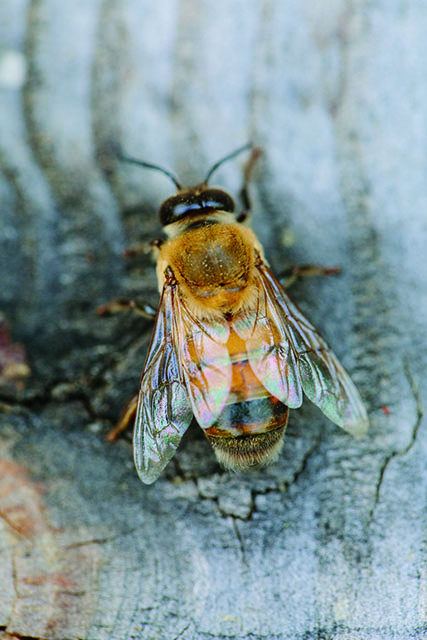 Male bees, called drones, pass on their hive’s DNA when they mate with queens from other colonies.

The lone female with reproductive organs, a queen bee does little but lay eggs, albeit some 1,500 a day. Her stinger-less male offspring, dubbed “drones,” are free to leave the hive and tomcat around, mating with queens from other colonies to spread her majesty’s DNA. Eventually, a dynasty will outgrow its physical space and swarm, as it’s called when the queen leaves in search of a roomy new home, taking many of the adults with her. Before departing, the bees prepare cells filled with larvae fed a special diet of royal jelly to encourage the development of fertile females. The first to emerge typically kills the others and claims the throne.

What Kind of Bees Should You Get?

Given their promiscuous nature, most western honeybees are “mutts.” Though some Internet purveyors sell specific varieties, a colony certainly won’t stay pure-bred for long. “Historically, Italian bees have been the dominant choice in this country,” Carr says of the subspecies Apis mellifera ssp. ligustica. But when an Italian queen mates with drones from other hives, which has been happening here for more than 150 years, a mixed bag results. And that’s a good thing. “Genetic diversity is a huge advantage,” Carr adds, especially if the bees are adapted to your particular climate. “If I buy bees from Georgia, they might not survive my winters as well as bees from Vermont,” explains the pro, who orders stock from New York’s betterbee.com and Connecticut’s bee-commerce.com.

Without bees, Seed Phytonutrients wouldn’t exist – many of the ingredients in their formulas are products of pollination.

Though bee suppliers won’t ship until spring, the time to begin researching sources is now, since the best sources tend to sell out by the end of the year. (If you don’t already know nearby beekeepers, surf the American Beekeeping Federation’s website, abfnet.org, to find organizations in your area.) For roughly $150, you can secure a package that contains about three pounds of bees, including a queen, and a small tin of syrup to sustain the gang during transit. Or get a head start with a nucleus: a queen and small colony pre-packed on five waxed frames, three with bees, two with honey and pollen. The latter option costs an additional $50 or so, but you’re more likely to get honey the fall after a spring delivery, as opposed to the following summer.

Rob Keller, a longtime beekeeper and founder of Napa Valley Bee Company, never spends a red cent on stock, preferring to capture swarms that have split from their colonies. “These bees have proven they thrive in your region,” he explains. The process isn’t as difficult as it seems. One simple method is to bait empty hives, or even cardboard boxes, with a pheromone lure (available at brushymountainbeefarm.com).

Rob McFarland – the author, with his wife, Chelsea, of Save the Bees with Natural Backyard Hives – hits the California-based websites wingsofnaturebees.com and thevalleyhive.com for bees and other supplies to outfit the couple’s five-acre farm outside Spokane. He also underscores the importance of local mentors: “You might have all sorts of knowledge on an intellectual level, but putting that into practice can be a challenge without guidance.” Different municipalities have different regulations regarding specifics like minimum lot size and maximum number of hives. 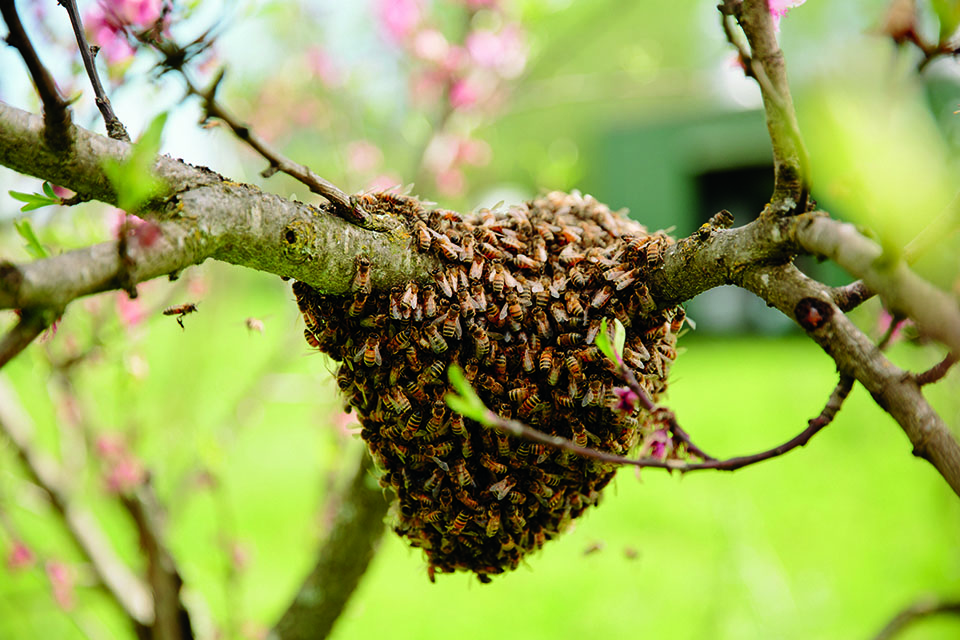 Once a colony has outgrown its hive, the queen will depart with part of her posse to search for a new home. This mass exodus, known as a swarm, can be forestalled by providing plenty of brood space. Keller often catches swarms on the loose and hives them up.

A knowledgeable neighbor can also point you toward the best pollen-providing plants for your zone. To keep the hive humming, bees need access to a mix of trees, shrubs, ground covers, edibles, and flowering perennials and annuals from spring through fall. On the advice of his peers in Washington state, McFarland planted more than three acres of clover, alfalfa, bee balm, coneflower, lemon balm, and mixed wildflowers. (For more details on bee-friendly horticulture, visit thehoneybeeconservancy.org.)

Regardless of where you live, the Langstroth hive, invented by Reverend Lorenzo Lorraine Langstroth in 1852, remains the industry standard. The simple design consists of a series of stacking boxes, or supers, each outfitted with 8 to 10 waxed frames, on which bees build combs. The bottom super functions as a brood chamber that houses the queen, eggs, larvae, pupae, immature bees, and their food. Many beekeepers top this with a flat screen called a queen excluder to prevent her from entering the honey supers above. You can start with one honey super on top of the brood chamber, adding another when the first is 50 percent full, and so on.

Langstroth hives, which also include a protective bottom board and two top covers, cost as little as $100 from suppliers like dadant.com and westernbee.com, though handy types might consider building their own. You’ll want to set the hive on a stand in an easily accessible location with level, firm ground. The site should provide good ventilation, direct sunlight from the east, and a nearby water source (a trickle from your garden’s drip-irrigation hose will do).

Carr suggests beginning with two hives, so you can compare and contrast how the colonies evolve, making adjustments as you learn. “You can also take a frame from the brooding chamber of the stronger hive,” he adds, “and use it to boost the weaker one.”

Just don’t go overboard, warns Keller. “A queen will lay only as many eggs as the environmental conditions support. Often, when a colony doesn’t thrive, it’s because the location is oversaturated with bees. You either have to pull back on the number of hives, or feed the bees sugar water, which I won’t do because it’s outside their normal biological conditions.”

Another primary cause of poor hive health: the invasive varroa mite (For more information, see Why Do Bee Colonies Collapse?) “If you see high varroa loads, the colony is doomed,” says Keller, who adds that close monitoring of the hive is critical for natural beekeepers. If he notices a mite infestation the bees can’t shake, he’ll try replacing the queen, but refuses to use pesticides. “They’re not my bees. They’re not your bees. They’re our bees,” Keller explains. “The queen is mating with drones from other colonies. Use artificial means to support your colonies, and you’re weakening the overall genetic stock.” 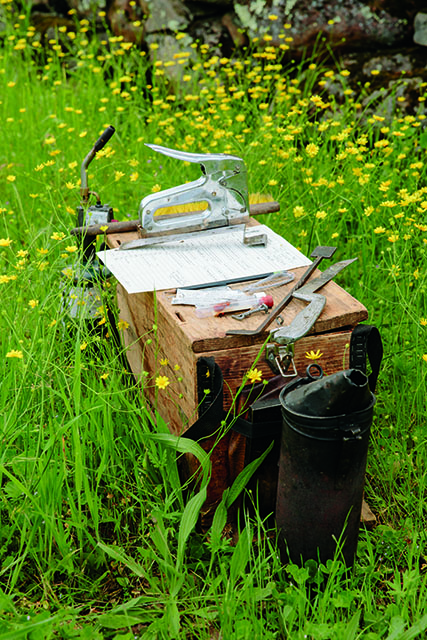 What’s in Keller’s trusty kit? A smoker (fueled by natural materials), a blowtorch for sanitizing tools, and the notebook he uses to keep meticulous records.

How to Collect Honey

Honeybees are territorial insects, therefore, beekeepers should take protective measures before disturbing the hive. “You never want to be nervous,” says Carr, who prescribes a ventilated suit, veil, and gloves. You’ll also need a hive tool, for opening and closing the lid, and a smoker to calm the bees. “Smoke signals that there might be fire nearby,” he explains, “so the bees fill their bellies with nectar, leading to lethargy.” (For more information, see above.)

When it’s finally harvest time, the McFarlands recommend separating the bees from the honey using an escape board ($10 to $15 at the aforementioned suppliers). This tool prevents the insects from getting into the honey supers and makes it easier to remove frames that contain mostly capped cells (a signal the bees have nearly completed their work). 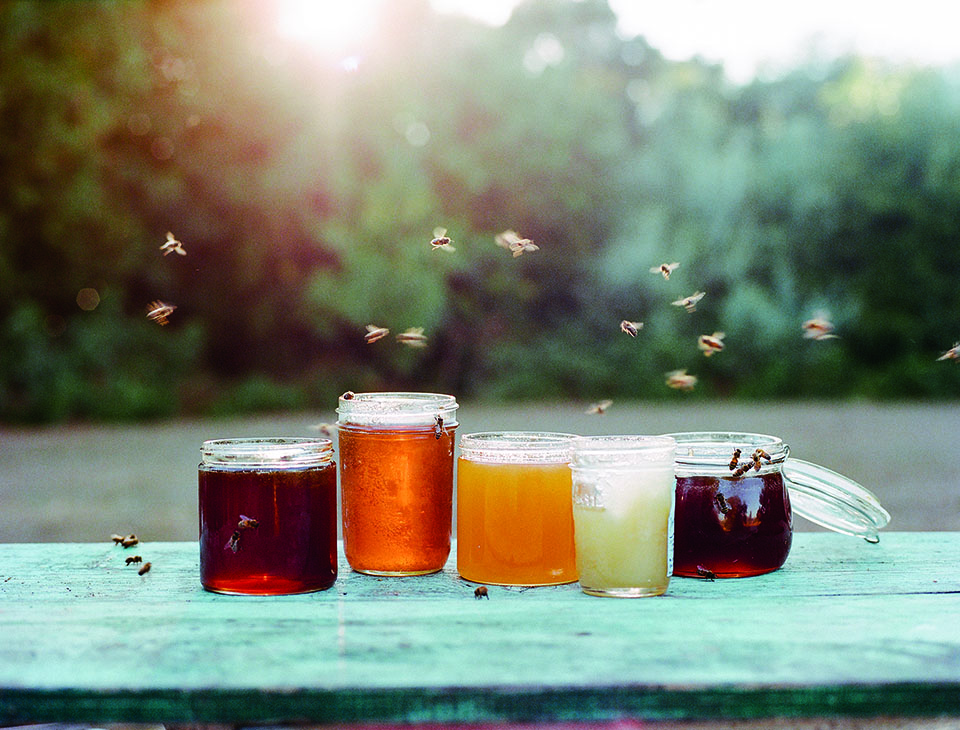 Honey gleans its color from the types of pollen and nectar the workers bring back to the hive from surrounding plants. Fall harvests tend to be darker than early summer ones.

To extract honey, many beekeepers employ the low-tech “crush and strain” method, which involves squashing the combs and pressing the honey out. A more sophisticated centrifuge extractor spins the honey out at high speeds. It will set you back upwards of $200, but you may be able to borrow one from your local bee club. Keller often simply cuts the fresh comb into blocks and vacuum seals them. “I’ve found a lot of people in Napa want something more than honey in a jar,” he explains.

Of course, Keller doesn’t see the harvest as his end goal. “The bees aren’t making honey for us. They’re making it for themselves. I’m not a honeygrubber. I make sure my bees have enough to get through the winter before taking my cut.” Carr seconds that sentiment, emphasizing that sharing the wealth shouldn’t involve major sacrifice. “If all goes well and your hives are thriving, chances are you’ll have more honey than you know what to do with.”