The Kids Are Alright: How Two Artists Built a Goat Farm into a Viable Business - Modern Farmer
How-To, Lifestyle

The Kids Are Alright: How Two Artists Built a Goat Farm into a Viable Business

How a couple of young artists, guided by gut instinct and Google, found an unlikely creative outlet in goat farming - and came out on top with a viable cheese and caramel business in southern Vermont. 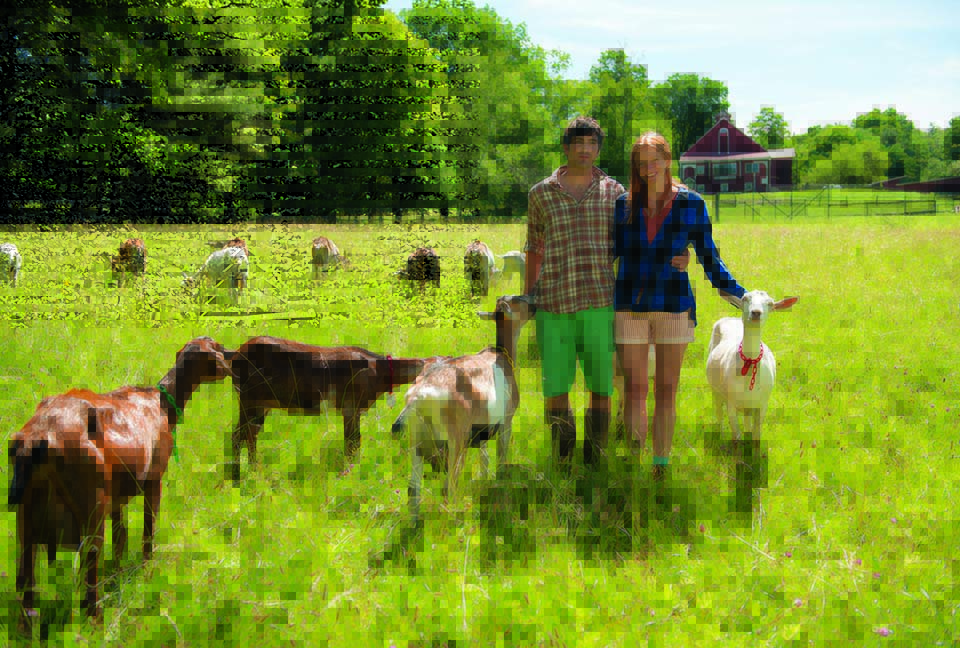 What’s a girl to do with an advanced degree in fine art amidst a major recession? If you’re Louisa Conrad, circa 2008, you sign up for an apprenticeship at a Vermont goat farm and marry a poet. All of which might lead your father to question your financial prospects – quite publicly – in his wedding toast. As Conrad’s husband, Lucas Farrell, recalls: “Louisa’s dad joked that, as artists, we wouldn’t make much money, but as farmers, we’d probably lose a lot more of it.”

“Goats are smarter, closer to dogs. They have individual personalities. They can turn to a human and ask for help.”

Undaunted, the newlyweds followed their initial agricultural apprenticeship with a full-time caretaking gig at a nearby sheep farm and fromagerie. “Coming from academia, where everything was abstract, the rhythm of farming was incredibly appealing,” Farrell says. “We were like, ‘How can we do this every day?’”

The sheep, however, left much to be desired. “Goats are smarter, closer to dogs,” Conrad explains. “They have individual personalities. They can turn to a human and ask for help. They follow us if we clap.” Luckily, the couple’s employers allowed them to acquire a small herd of goats, then offered to sell them the 86-acre property, bit by bit.

“They were looking to retire,” says Conrad, “but willing to wait until we had the money and skills to take over. They were our incubator.” Over the next two years, she and Farrell learned the nuances of shepherding animals and aging cheese. Google helped the pair through their first kidding season (via such queries as “When do you know a goat is going into labor?” and “How do you trim hooves?”).

The hardest part, according to Farrell, involved navigating the “seriously unsexy stuff” of business planning and grant and loan applications. “When you apprentice, you do the physical labor, which you love. You don’t realize how much paperwork is involved until you try to own and run the place. You don’t yet see the full picture.” [continued below the photos] 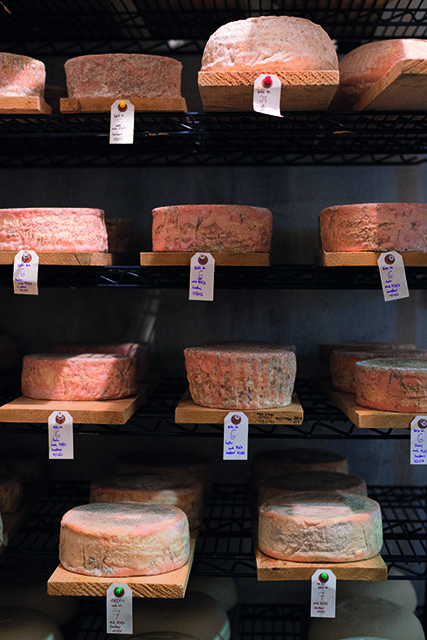 Goat cheeses begin the aging process in one of two caves at Big Picture. 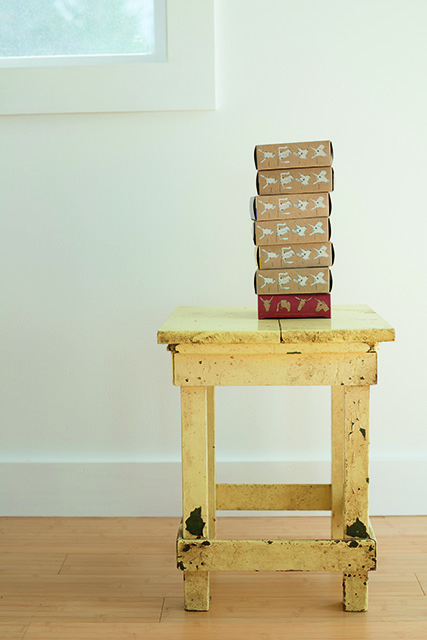 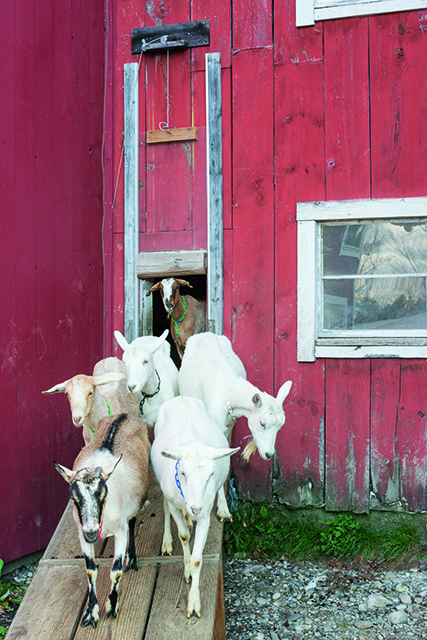 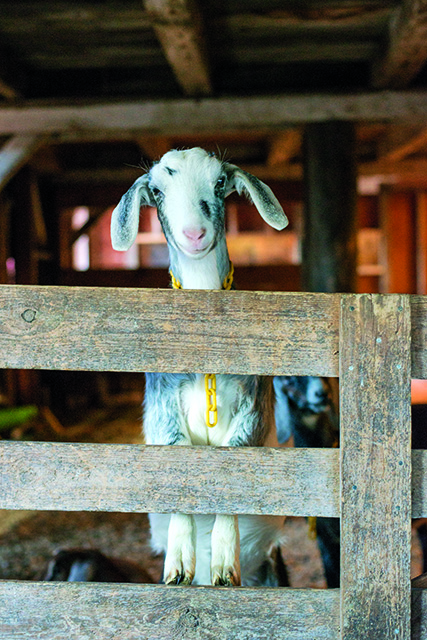 Ghost Trout, a Nubian- Alpine mix, perches in the barn. According to Conrad, Nubians have great personalities, but can be “a pain in the ass to milk. They like to dance on the platform.” 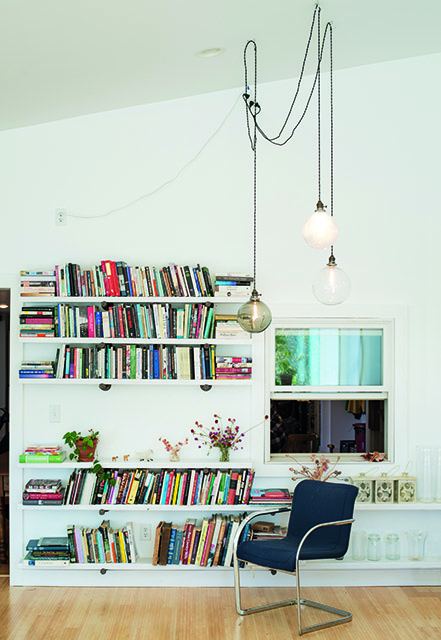 The couple installed bookshelves in the creamery addition, though Conrad jokes that they’ve only had time to read four books in as many years. 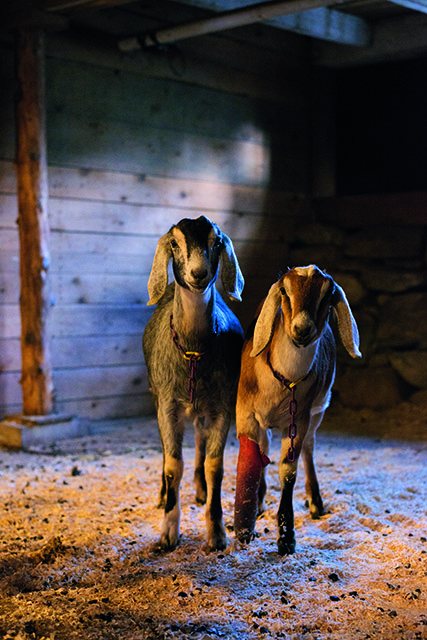 Dumbo (left), a Nubian, sidles up to Mayfly, a Nubian- Alpine mix who, Conrad speculates, broke her leg “climbing atop other goats to get to the best feeding spot.” 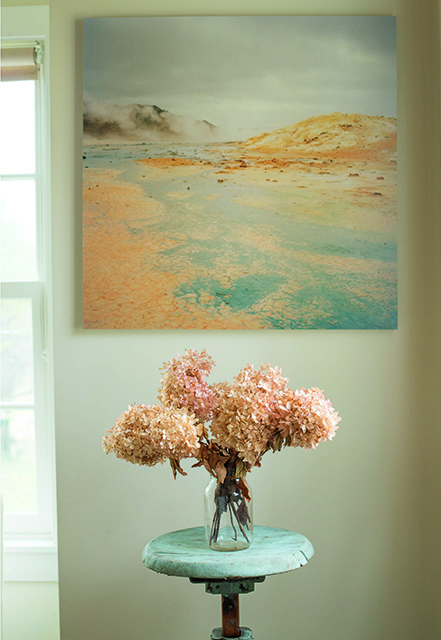 The artist took the photo on the wall in Iceland, where Farrell proposed to her. 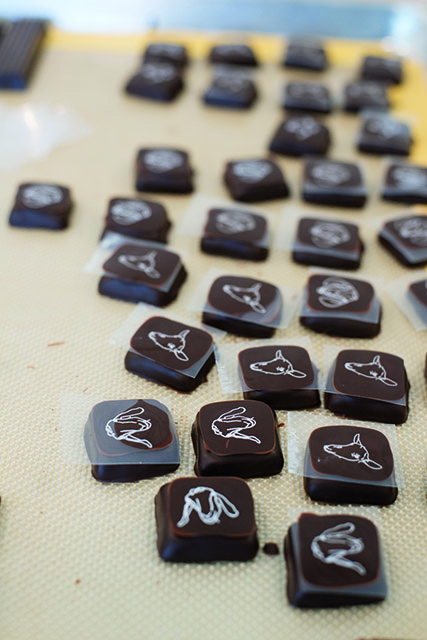 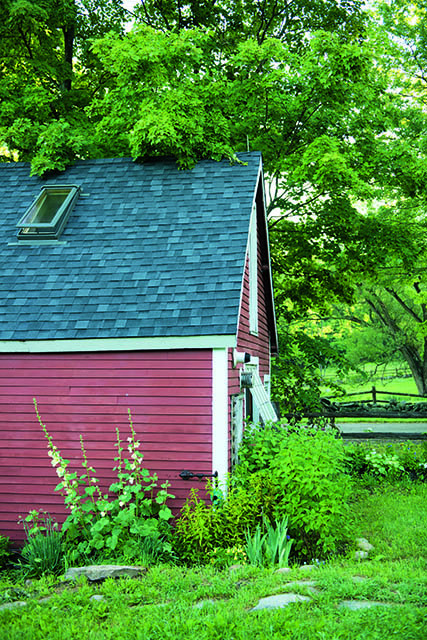 Two apprentices live in the former colt barn during nine-month stints on the farm. 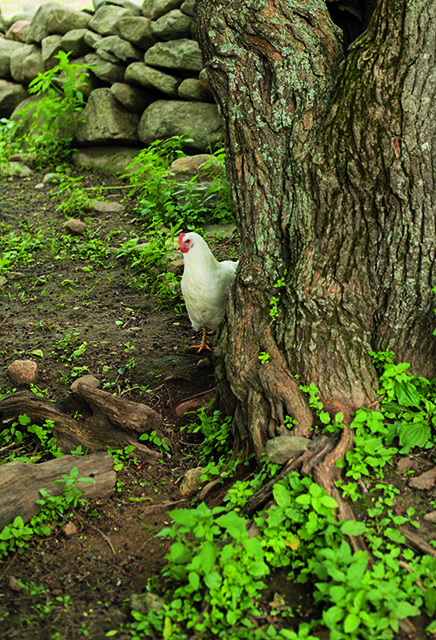 Big Picture is also home to what Conrad calls “a hodgepodge of heritage laying hens,” including this Wyandotte. 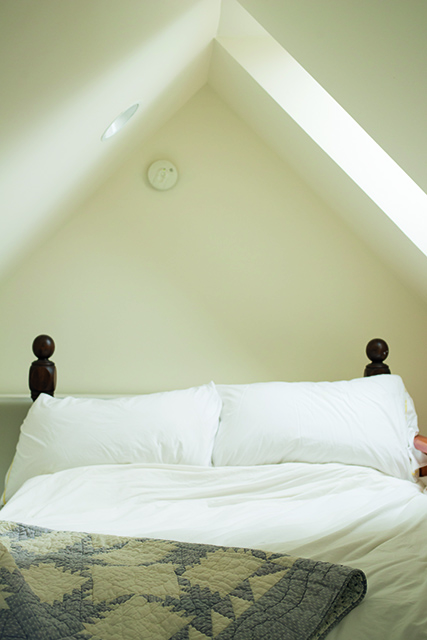 Since Farrell and Conrad rarely leave the farm, they encourage friends to come stay in this cozy creamery loft. 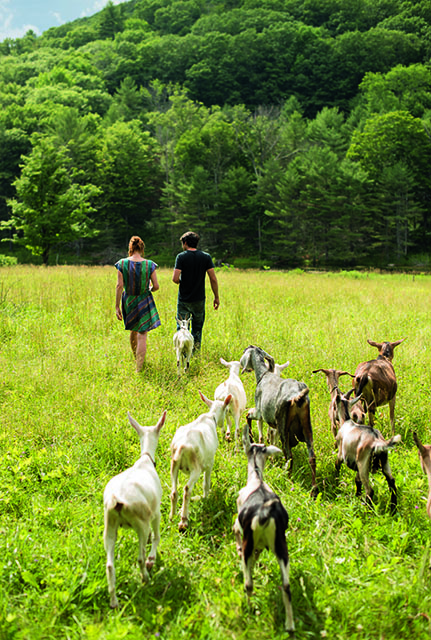 The couple rotate their goats among the property’s fields and forests from spring through fall.

Today, Conrad and Farrell’s Big Picture Farm claims 40 goats – Alpines, Saanens, Nubians, and mixes of those three breeds – as well as seven employees. (The sheep have since moved on to the greener pastures of a Greek-yogurt maker on New York’s Long Island.) Though the brand turns a profit in part from its two cave-aged cheeses, “the Vermont cheese market is pretty saturated,” says Farrell. “We couldn’t fathom making something better than Michael Lee’s Twig Farm Square Cheese, for instance.” 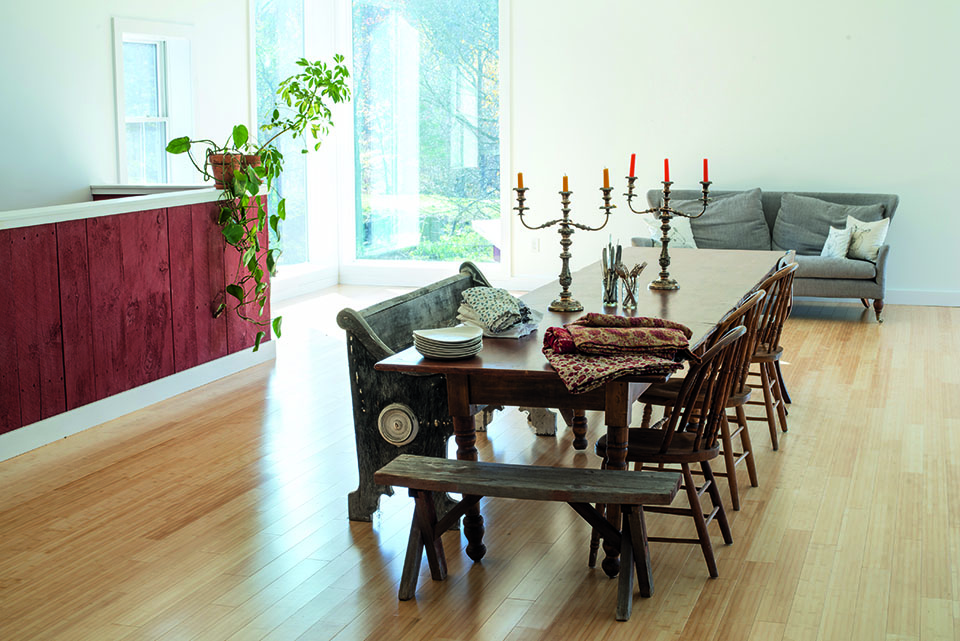 Conrad and Farrell recently expanded the farm’s creamery, creating this space for staff meals. They found the table at an antiques shop; the church pew and bench were inherited from the property’s previous owners.

Instead, the couple shifted their focus to caramel, “an impossible product that changes daily depending on the atmospheric humidity and the fat content of the goats’ milk,” per Farrell. When the duo took a booth at the Summer Fancy Food Show in 2012, their candies garnered interest from Whole Foods and Anthropologie. Remembers Farrell: “As I was taking down purchase orders, I was nodding and saying ‘Of course,’ but thinking, ‘There’s no way we can fill this.’ I wrapped caramels until 2 a.m., then woke Louisa for the graveyard shift.” 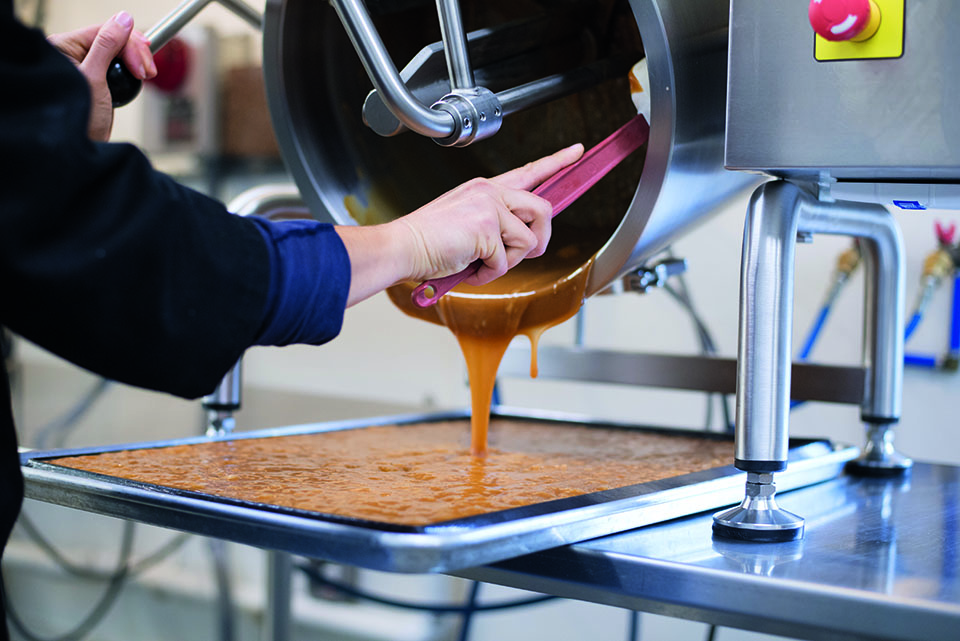 “Coming from academia, where everything was abstract, the rhythm of farming was incredibly appealing.”

“Ten years ago, if someone had told us we’d become goat-farming confectioners, we would have deemed that person certifiably insane, albeit very imaginative,” admits Conrad. “Truth is, we both feel creatively satisfied.” Her husband agrees, citing the transformation the animals have wrought upon the landscape by munching their way through formerly wooded acres: “They’ve sculpted and transformed the hillside. It’s like a long-term, ever-evolving art project.”

Conrad’s delicate line drawings of the goats grace Big Picture’s packaging. Farrell’s tender bios appear on the website. (Eloise is “introspective.” Ginger is “coquettish.”) Of one retired goat, he says wistfully, “Gertrude’s still kicking. She has a hold on my heart. Last year, we hosted a big oyster dinner with friends to celebrate her tenth birthday. 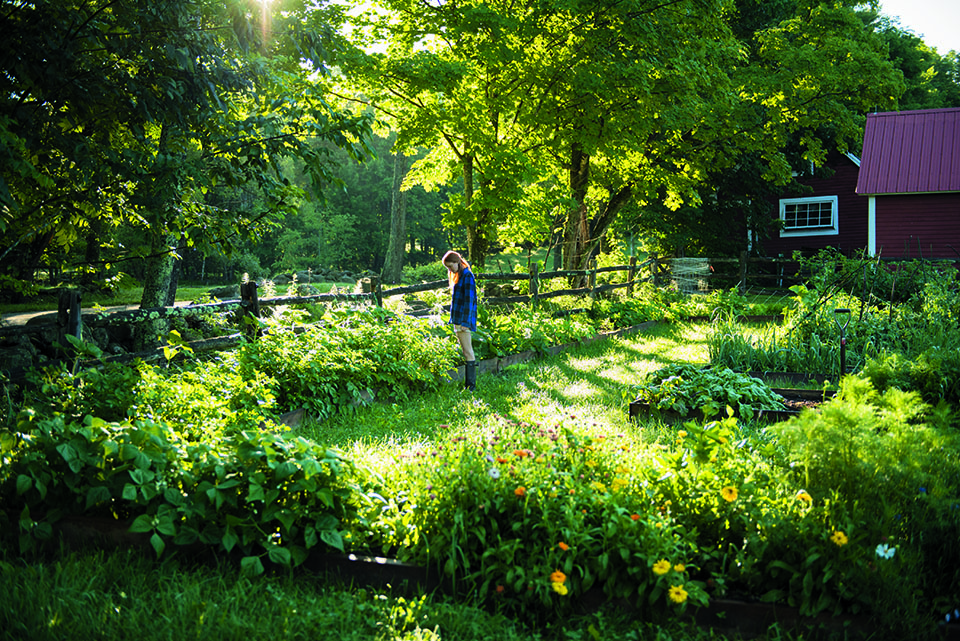 Conrad grows potatoes, green beans, lettuces, and other vegetables to feed her family and staffers.

The couple have expanded their menagerie to include 30 laying chickens and three Tamworth cross pigs, and planted a 5,000-square-foot kitchen garden that produces enough to feed themselves and their employees. The pair also renovated the original creamery, adding office space, a guest room, and an open living-dining area that accommodates staff meals. The décor there, and in the farmhouse, is clean, white, and understated. “The farm is such a messy, chaotic ordeal,” explains Conrad, “that we try to keep our home and office as minimal as possible.”

That may change. Six months ago, the couple welcomed a new element of chaos into their lives when Conrad gave birth to a baby girl. Although bleary-eyed from exhaustion, the new parents count themselves lucky to be able to plop little Maisie down in the garden or barn while they pull weeds or look after the animals. “We used so many lovely, strong female names on our goats,” Conrad muses, “that it was a bit of a struggle to name our daughter.”

This is sweet & uplifting to read. So glad you followed your Zen. I hope you both keep caramelizing & herding on. Your work is amazing. Caramels are a bear to make!

Related
Animals, Dairy, Meat, Opinion
Opinion: Feeding Insects to Cows Could Make Meat and Dairy More SustainableMerritt Drewery
Animals, Health
Rapid Tests Can Help Curb Deadly Infections in Livestock, TooShea Swenson
Plants
How a Desert Town Is Growing Its Way to Better HealthElizabeth Bellizzi
Plants
Why We Need to Adopt More Orphan CropsShea Swenson
wpDiscuz
We use cookies on our website to give you the most relevant experience by remembering your preferences and repeat visits. By clicking “Accept”, you consent to the use of ALL the cookies.
Cookie settings ACCEPT
Privacy & Cookies Policy