Beyond Goat Yoga: 5 Activities That Pair Humans with Goats (Like Goat-Karting!)

No yoga mat required, we promise. 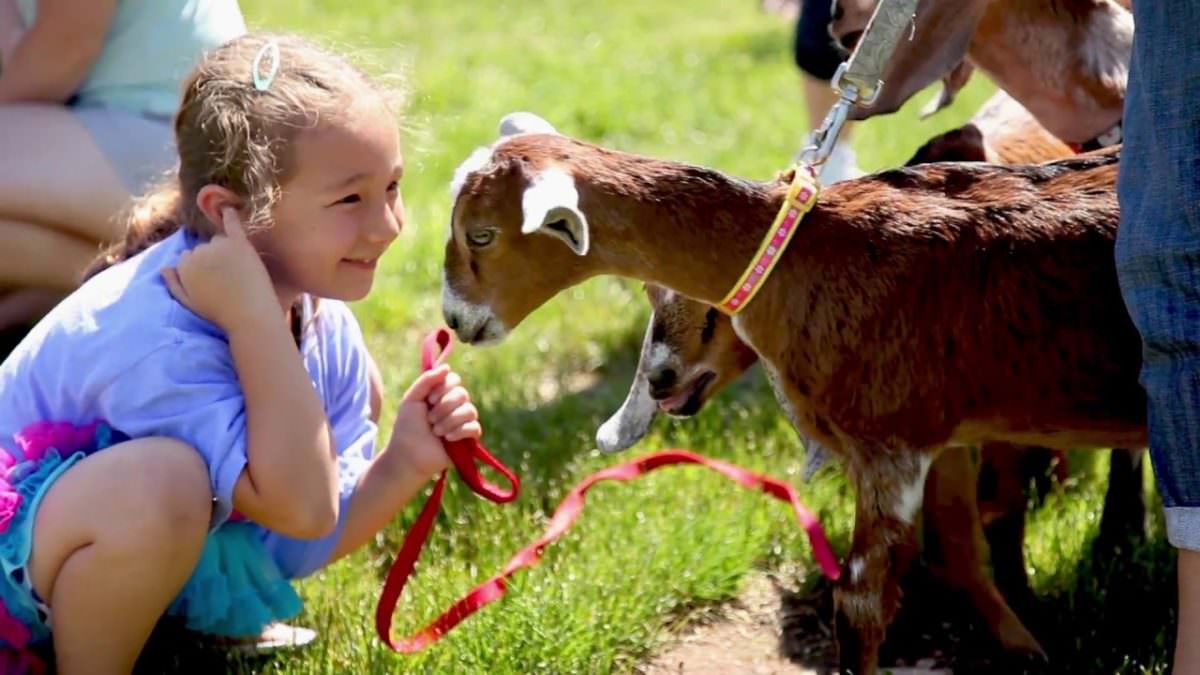 Goat racing is all the rage Down Under.
Photography The Tree of Knowledge Festival
Share
Tweet
Pin
Email
300 Shares

Party Goats Los Angeles bills itself as the City of Angels’ only party goat rental. Basically, you order up some super cute Nigerian dwarf goats by the names of Spanky and Pippin who’ll come hang out at your next shindig. The company also offers goat yoga, of course. Since it’s LA we’re talking about, it only makes sense that Scout Raskin, the woman who launched the service earlier this year, was in cult director John Waters’ classic film Cry-Baby when she was seven years old playing the role of Susie-Q.

Most kids love to dress up in costumes, and the same hold true for some four-legged, hoofed kids, too – or they’re at least patient enough to let their owners to dress them up. This fun trend has been making the rounds at 4-H shows, stock shows, rodeos, and county fairs for awhile now, and it’s just as cute as you’d expect them to be. The Fort Worth Stock Show and Rodeo, held each January, has hosted some specially steller costumes in the past, with goats dressed as characters from Star Wars, Pirates of the Caribbean, and Mario Brothers, among others.

In Barcaldine, Queensland, Australia the Tree of Knowledge festival includes goat cart races – no, not go cart, GOAT cart – that are a pretty big deal. Kids over 10 years old and their goats vie for cash prizes as they rocket down the track on light carts pulled by goats with names like Patches O’Hoolihan and Smokin’ Joe. The local high school even has its own goat racing team. 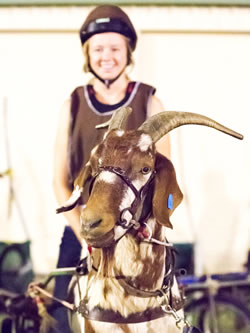 This goat is ready to do some racing. Tree of Knowledge Festival

There are goat parades aplenty from China to Switzerland, but we especially like the annual Roofing of the Goats that takes place every June in Door County, Wisconsin. During this annual festival, goats are marched through town and and then they hop onto the green roof of Al Johnson’s Swedish restaurant and happily munch on the grass growing there. The humans get to eat as well, too – the parade is the kick off for Goat Fest, where there’s a Swedish pancake eating contest, among other things.

At an elementary school in Brighton, England, five pygmy goats – Alan, Ethel, Maya, Bertrand and William – were brought in earlier this year to help with lawn duties but soon became a teaching tool that the staff at the Varndean School says has greatly improved student behavior. The school’s Goat Club now has 100 members who get to hang out with the animals during lunch, spend time outdoors, and learn the skills required to care for the goats. One student told the Telegraph newspaper that his time with the goats has taught him “leadership responsibilities.” The school’s director of finance, Hilary Goldsmith, told ITV news that having the goats are being used “in lots of creative ways to support teaching and learning in several subject areas.” The goats have become quite the media darlings, and they even have their own Twitter account.

And of course every day is #OutdoorClassroomDay in Goat Club. Here’s some of today’s action. Special thanks to those who were on poo duty. pic.twitter.com/gjbGZx7ny0

While the goat yoga fad may pass, you know now there are other ways for you to enjoy the company of these sweet little bearded ruminants that don’t involve doing some impossibly complex stretching.