Say hello to the newest English longhorn bull. His nickname is "Little Roundabout" and he's one of only about 40 of his kind in the U.S. 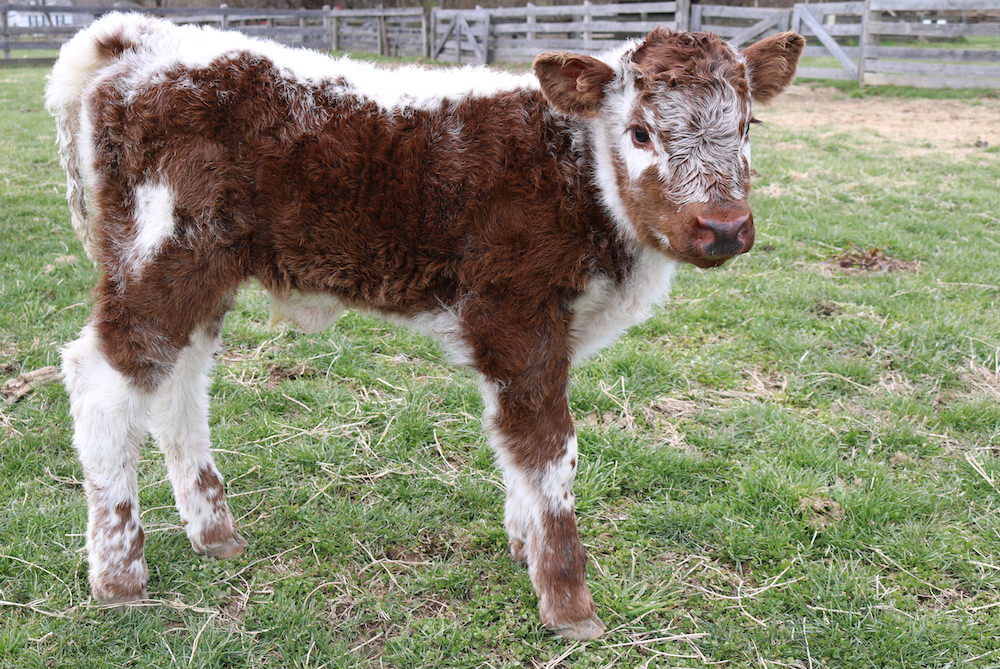 Meet the newest English longhorn bull. His nickname is Little Roundabout and he's one of only about 40 of his kind in the U.S.
Photography Conner Prairie
Share
Tweet
Pin
Email
1K Shares

First, you have to understand that English Longhorns are very rare – there are only 40 in the United States, and the herd at Conner Prairie, an 850-acre park that includes breeding herds of rare livestock, is home the second largest in the nation – it now numbers 11 head, thanks to the newborn bull. (The other herd is at Bayshore Kennel and Farm, in Virginia.)

According to the Conner Prairie’s livestock manager, Kevyn Miller, the story started last year when Blackbrook Longhorns, a breeder in England, bred two different bulls to two different cows and shipped the resulting frozen week-old embryos to Indiana. One of the embryos was implanted into a female shorthorn cow at Conner Prairie that was chosen for her docile nature and mothering abilities.

The biggest cost of the project was getting the embryos to Indiana due to things like inspection fees, duties, tariffs, and shipping costs, says Miller. A donor helped fund the procedure that was all about introducing unrelated genetic material into the breeding line since the pool here is so small.

“Embryo transfer helps with keeping these rarer breeds from getting inbred and keeps the genetics pure,” says Miller in a phone interview with Modern Farmer. “Having a bull calf now means we can breed him to anything on our farm or in the whole country because he’s not related to any of them.”

He says they’re hoping to to repeat the success of this birth with another embryo transfer, which would eventually allow them to further expand the herd’s genetics.

According to Miller, the English longhorn was first brought to America in the 1600s and had its “heyday” between about 1750 and the early 1800s, before more specialized breeds began appearing and overtook the longhorn in popularity. The English longhorn had all but vanished in the U.S. by the Civil War and it wasn’t until the 1990s that it was reintroduced to this country.

The breed, which is known for its intelligence and docile nature, also nearly died out in England. There were only 50 animals left by the end of World War II until the breed was rescued by Rare Breeds Survival Trust. By 1979, thanks to the organization’s efforts, there were nearly 350 breeding females in the country. While still very rare in the U.S., the breed is seeing a small resurgence in the U.K. where the numbers have increased enough in England that some butchers are selling the meat, described as delicious with a velvet texture, according to The Dairy Site.

Here in the U.S., there are still too few of the animals to use them as meat, but they do make excellent oxen. Miller says they are never going to compete with an angus for beef or a holstein for dairy, but they represent a bit of living history that allows him to connect visitors to America’s past and agriculture in general.

“For us to have cows that don’t look like the ones the guests saw before coming to Conner Prairie is kind of neat. It starts conversations about why these cows look different and what our ancestors had to work with.”