Farm workers still don't have adequate labor rights, but thanks to more than a century of organized protest, conditions have improved.

Chavez grew up on California’s migrant farm worker circuit in the 1930s and 1940s, quitting school after the seventh grade to work in the fields full-time. He became politically active in the 1950s and, over the course of his 40-year career, brought worldwide attention to the low wages, horrendous working conditions, and daily abuses of farm workers throughout the Unites States and abroad. Through scores of strikes, protests, and boycotts, Chavez was successful in brokering labor contracts with major agricultural employers, and also in changing state-level labor laws to ensure fair wages and humane working conditions for large numbers of farm workers. He passed away in 1993 at the age of 66.

A tradition of farm labor protests by the hardworking, deeply under-appreciated communities who have fed America stretches back into the 19th century, and Chavez was a devoted student of these demonstrations. The farm labor movement reached its pinnacle under his leadership in the 1960s and 1970s, though it continues to evolve in new forms today.

Here is a brief pictorial history of some of the labor movements that inspired Chavez, along with a few photos from some of the most important moments in his own legacy as a labor leader. 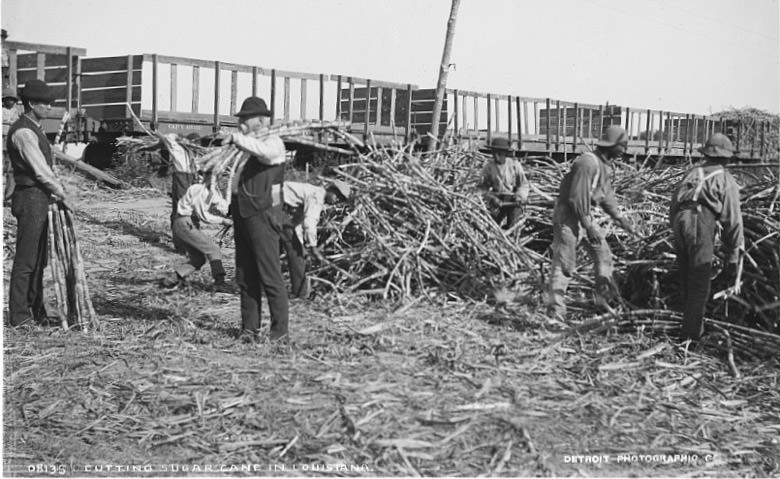 In November 1887, The Knights of Labor, a national labor advocacy group, organized a strike of approximately 10,000 mostly black workers on the sugar cane plantations around Thibodaux, Louisiana, in protest of working conditions that amounted to indentured servitude. White militias brutally attacked the protesters – estimates of the dead range from 30 to 300 – who were unsuccessful in persuading the plantation owners to meet their demands. 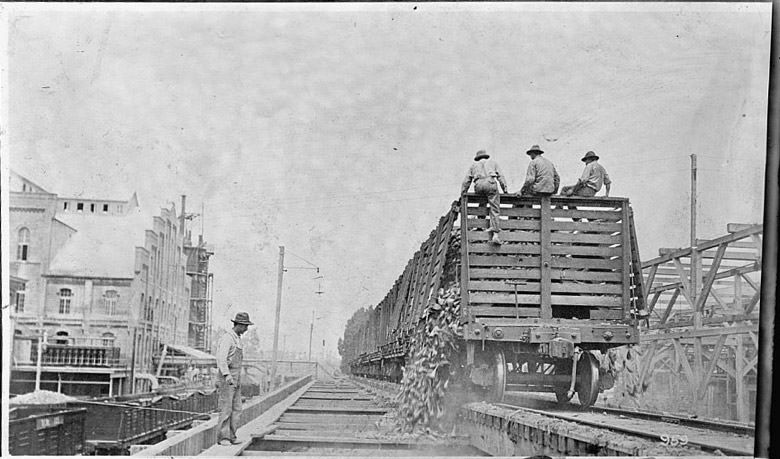 Workers unload beets at the Oxnard sugar beet factory in California. Image courtesy of the Library of Congress

This event marked the first time that Mexican and Japanese farm workers banded together in protest. In March 1903, the 1200 members of the newly formed Japanese Mexican Labor Association walked off the sugar beet fields owned by the Oxnard beet company in southern California. One worker was killed and four wounded in a violent clash, though the company eventually gave in to their demands. 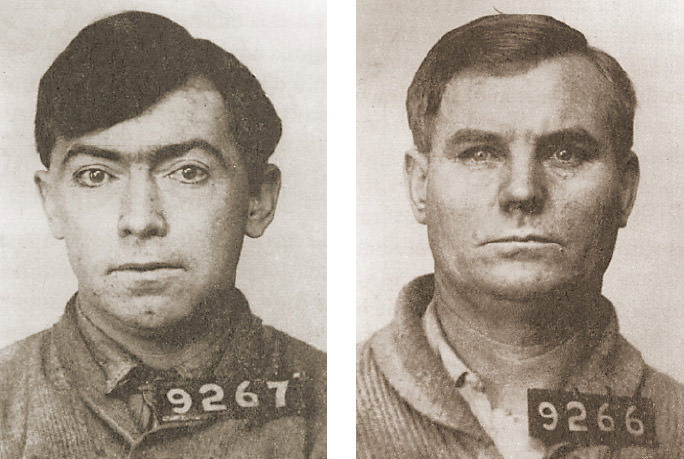 ”Blackie” Ford and Herman Suhr were arrested and jailed based on false accusations of murder during the Wheatland hops riot of 1913. Source: Wikicommons

Approximately 2,000 hops pickers at Durst Ranch in Wheatland, California, the largest agricultural employer in the state at the time, were meeting to discuss plans for a strike when local police attempted to physically disperse the crowd. A brawl ensued, shots were fired, and the National Guard was called in bring order. Several people were killed in the melee, including at least one worker and one police officer. 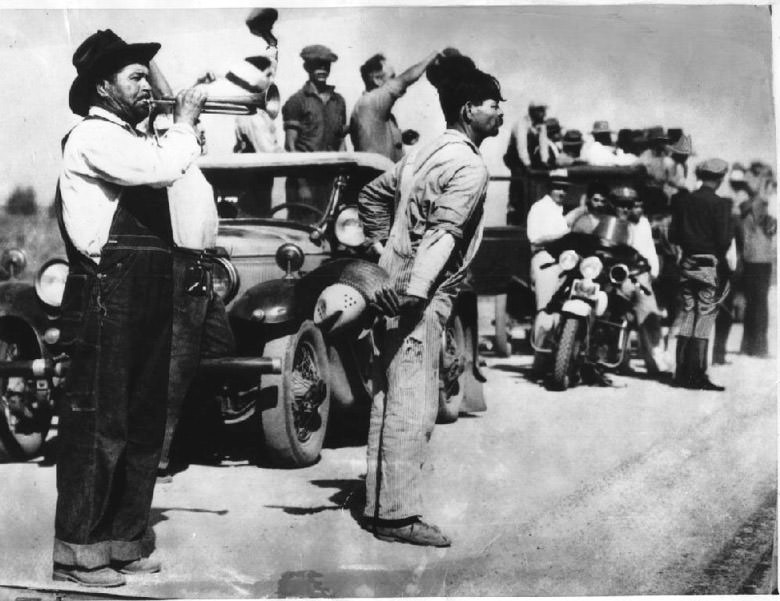 Protesters call for workers in the fields to join their picket line during the 1933 cotton strike. Image courtesy UC Berkeley, Bancroft Library

1933, the height of the Great Depression, brought the most widespread farm labor protests in U.S. history up until that time, which were not matched again until the late sixties. Nearly 50,000 farm workers in California participated in dozens of strikes throughout the year, culminating in the cotton pickers strike that fall in the San Joaquin Valley. While the strikes succeeded in garnering public outrage toward the growers, they were largely unsuccessful in changing working conditions. 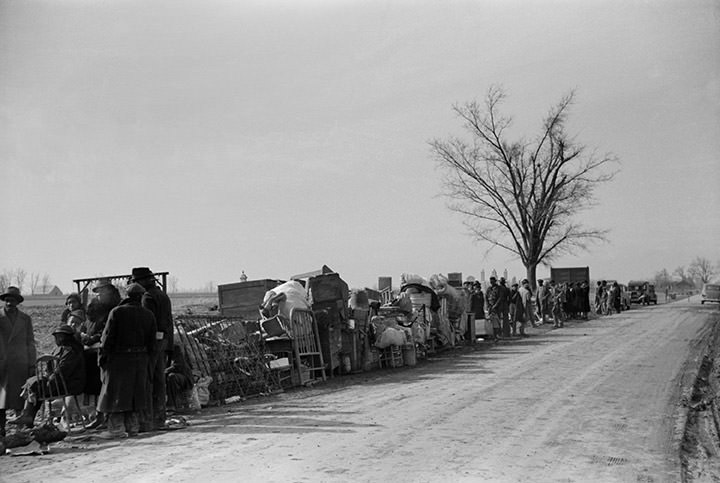 Former sharecroppers, evicted from the land, set up itinerant camps along a Missouri highway to demand access to worker housing. Source: Everett Historical/Shutterstock

In the “sharecropping” system that followed the abolition of slavery in the South, farmworkers were allowed to cultivate the land of wealthy plantation owners in exchange for a sizable portion of the harvest. This system began to crumble in the 1930s as some land owners began to evict sharecroppers in favor of migrant laborers. In the Missouri “Bootheel” region, approximately 1500 displaced sharecroppers, mostly black, but some white, began camping illegally along a rural highway in protest. The move drew sympathy from the White House, and eventually, government-subsidized housing was constructed for the workers. 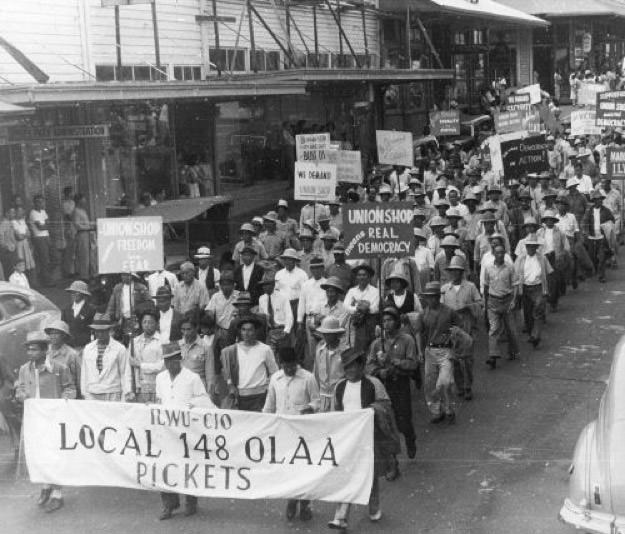 Throughout much of the nineteenth century and the first half of the twentieth, the Hawaiian Islands operated largely as a feudal state run by a few large corporations that ran sugarcane and pineapple plantations. Ethnic divisions among the Japanese, Filipino and other ethnic groups that comprised the labor force had long defused attempts to organize for better conditions, but in 1946 these groups joined forces and 26,000 sugar workers took to the streets. After a 79-day strike, the corporate owners made a number of concessions, effectively ending the feudal system. 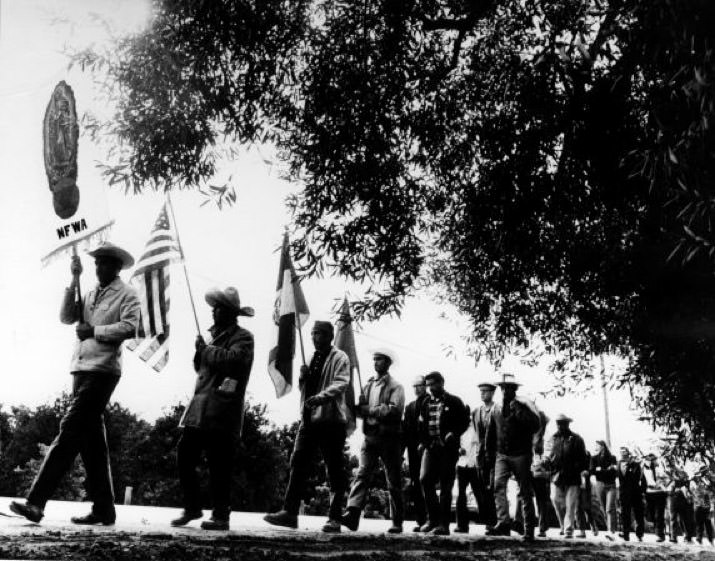 1966: A group of farm workers along the 340-mile march from Delano, California to the state Capitol in Sacramento led by Chavez during the grape boycott of the late 1960s. Source: Wayne University 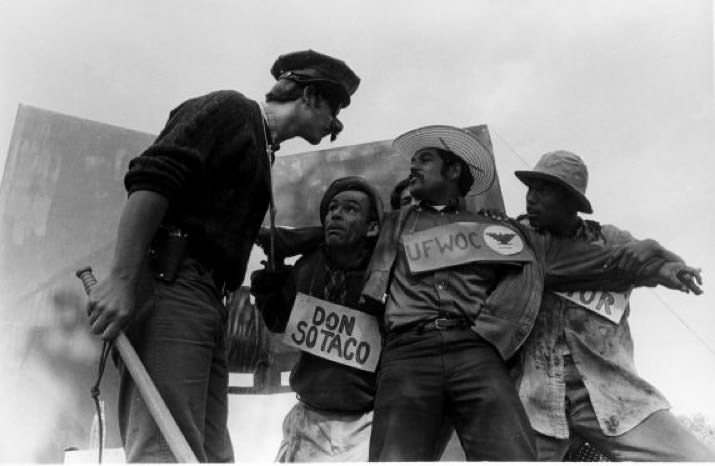 1966: A performance by the activist theatre troupe, Teatro Campesino, during the grape boycott of the late 1960s. Source: Wayne University 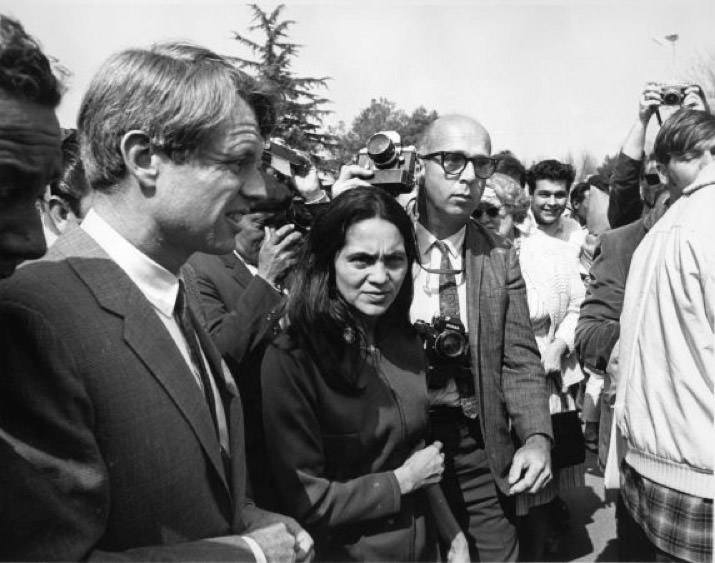 1968: Dolores Huerta, the co-founder with Chavez of the United Farmworkers Union, walks with Senator Robert F. Kennedy on the day that Chavez broke his 25-day fast intended to inspire non-violence in the farm labor movement. Source: Wayne University 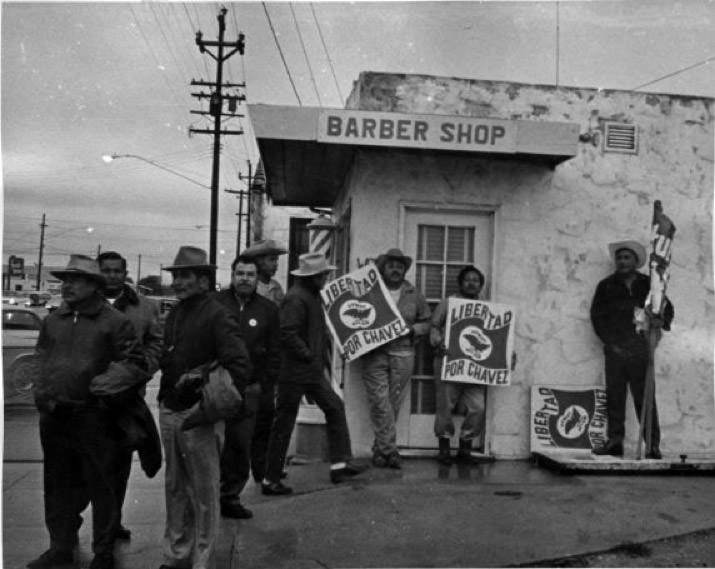 1970: A group of farmworkers gather in protest of Chavez’s imprisonment for refusing to call off a strike of lettuce workers. Source: Wayne University 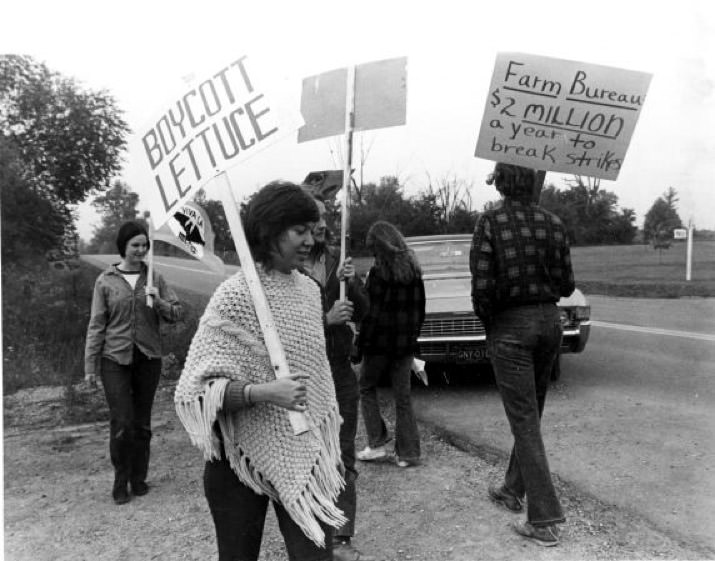 1973: A group pickets in support of the Salad Bowl Strike, a three-year series of protests on behalf of lettuce workers. Source: Wayne University

1973: Chavez walks with a group celebrating the end of the Salad Bowl Strike, one of the largest farm labor protest in history, which paved the way for major reforms California’s labor laws. Source: Wayne University

Popular
The Future of Hay Drying in AmericaLindsay Campbell
How to (Actually) Get Rid of Fruit FliesEmily Baron Cadloff
7 Smokable Plants You Can Grow That Aren’t MarijuanaBrian Barth
How to Get Rid of Spotted LanternfliesShelby Vittek
The Chocolate Companies Working to Uproot Unfair Labor PracticesEmily Baron Cadloff
Explore Modern Farmer
Related
Books, Politics
An FDA Insider’s Eye-Opening Account of the Most Powerful Regulatory AgencyEmily Baron Cadloff
MTMF, Plants
Meet the Modern Farmer Helping Colombian Coffee GrowersLindsay Campbell
Environment, How-To, Plants
How to Get Rid of Spotted LanternfliesShelby Vittek
Plants
There’s a Pumpkin Fungus Among UsLindsay Campbell
wpDiscuz
We use cookies on our website to give you the most relevant experience by remembering your preferences and repeat visits. By clicking “Accept”, you consent to the use of ALL the cookies.
Cookie settings ACCEPT
Privacy & Cookies Policy