Who said the great American burger had to be made with beef? Why not lentils, quinoa, and beet juice? 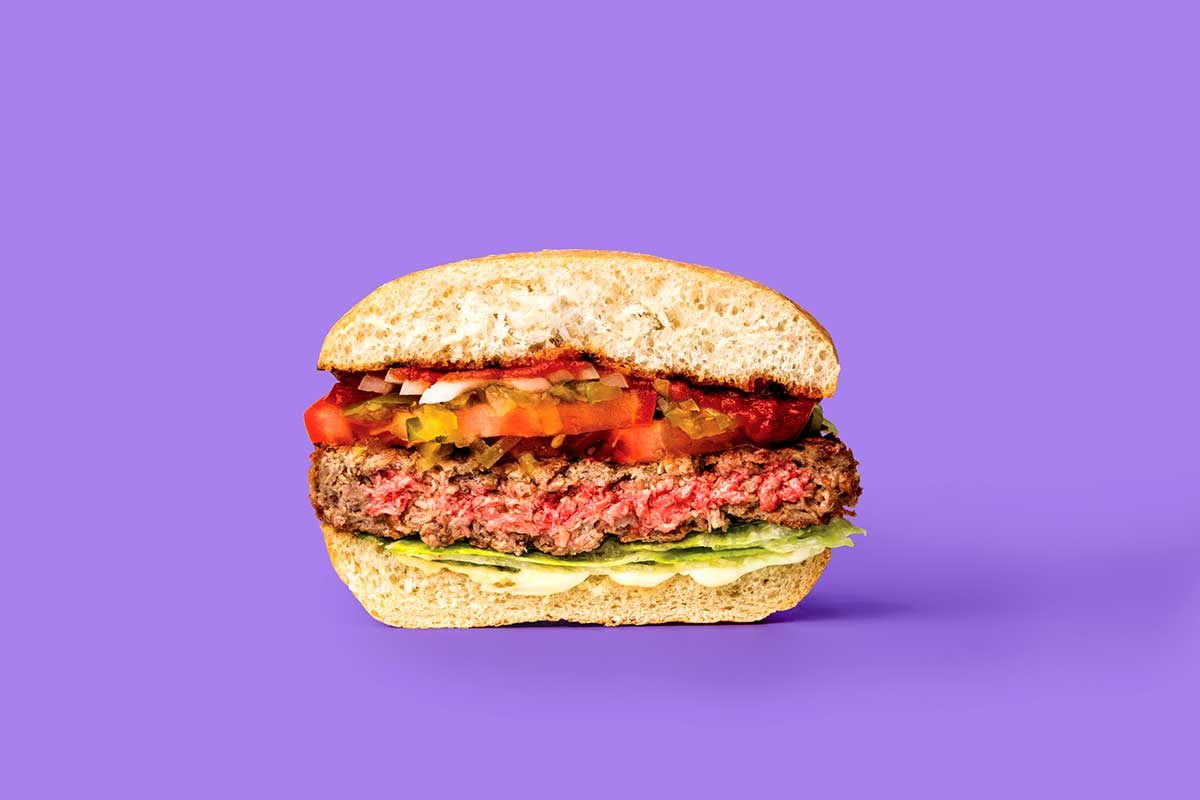 Would you believe this burger is 100 percent vegan? Well, it sure is.
Photography ImpossibleFoods.com
Share
Tweet
Pin
Email
6K Shares

Even Vogue claimed recently that “a new food frontier has arrived and it looks mighty leafy… we’ve arrived in a modern, bountiful, and, dare we say, sexy herbivore era.”

Personally, I can’t stand tofu – gives me awful stomach gurgles – and I’m a die-hard bacon addict, to boot. But I can’t deny that the objective case for veganism is incredibly strong.

Scientists have long asserted that vegans and vegetarians are healthier overall than meat-eaters. Studies show that vegans have less body fat, and considerably lower rates of diabetes, heart disease, cancer, high blood pressure… the list goes on. The bottom line is they live longer: a study of over 70,000 Seventh-day Adventists, who generally avoid animal products for religious reasons, found that, compared to meat-eaters, the vegetarians had a 12 percent lower mortality rate and the vegans, 15 percent lower.

There is even evidence that veg-heads are happier. (Thanks to those bumper stickers, we already knew vegans taste better).

And the best diet for the planet? You guessed it. There is ample evidence, some of which is presented below, showing that plant-based agriculture consumes far fewer resources and causes far less pollution. These facts are widely known, but food choices aren’t necessarily based on logic and reason. They’re rooted deep in culture – and vegan culture has always been on the fringe.

Meat-eating environmentalists like their beef grass-fed and their poultry pastured, which may be “sustainable” compared to industrial animal husbandry, but we’ll need a few more planet Earths full of lush green pastures if all seven billion of us want to eat that way.

On The Fringe No More?

That may be changing, though. In the UK, veganism has exploded by 360 percent over the last decade, and vegan food sales are up 1500 percent in the last year. The trends in the US are a little less clear but seem to be moving in the same direction. A 2011 Harris poll found that 5 percent of Americans were vegetarians (about half of whom identified as vegans), double the number in their 2009 poll, though a 2016 Harris poll says the number has dropped to 3.4 percent. Another poll, however, claims that roughly 9 percent of Americans are vegetarian and about 6 percent are vegan, and that the numbers have steadily risen over the last several years.

Whatever the actual number of committed vegetarians and vegans are in the US, the number of folks warming to the idea seems to be skyrocketing – at least according to the Google gods. This handy Google analytics tool shows that the relative number of searches for the term “vegan” has increased at least fourfold over the last decade – a slow, steady growth curve that turned exponential in the second half of 2016. Some of those searchers were no doubt looking for some of the many new vegetarian food products out there, a category that grew 60 percent between 2011 and 2015; new vegan food launches were up roughly 300 percent during the same period.

On the flip side, meat consumption in the US declined dramatically between 2005 and 2015, though it crept up again last year. Whether the masses fully embrace a meatless lifestyle remains to be seen, but at the very least it’s fair to say that “flexitarianism” – those who consciously choose to minimize meat consumption, but aren’t totally unyielding about it – is on the rise. Last year, the global market research firm Innova heralded flexitarianism as the top trend of 2016, which helped push a 24 percent bump in the sales of meat substitutes between 2011 and 2015. This year, Whole Foods declared flexitarianism a top new food trend as well.

What’s driving the mainstreaming of meatlessness?

Environmentalists are obsessed with cutting back on fossil fuels, yet giving up your car takes but one metric ton of carbon emissions out of the atmosphere each year, versus 1.5 metric tons if you give up meat and dairy. The latter is arguably the more practical option for the average person, but it gets a fraction of the lip service. Meat-eating environmentalists like their beef grass-fed and their poultry pastured, which may be “sustainable” compared to industrial animal husbandry, but we’ll need a few more planet Earths full of lush green pastures if all seven billion of us want to eat that way.

Food production, in all its aspects, is responsible for 25 percent of greenhouse gas emissions on the planet. But the livestock aspect accounts for the biggest chunk, contributing 18 percent of all greenhouse gas emissions, and almost 80 percent of those from the agriculture sector. According to researchers at Oxford University in the UK, if everyone on the planet went vegan, global emissions would fall by 55 percent, putting the planet on track for the 2050 goals set out in the Paris climate agreement. If we all were vegetarians, emissions would fall by 44 percent – not quite enough to meet the 2050 goals, say the Oxford researchers.

It Frees Up Land and Resources to Feed 9 Billion People

The global population is expected to swell to about nine billion by 2050. But we’re already using pretty much all of our arable land for agriculture. In theory, technological advances may enable us to produce more per acre, but at the same time, it’s widely known that the best agricultural soils on the planet have been heavily depleted over the last 50 years, so it’s unclear if technology will be able to offset production losses from erosion while also producing enough to feed billions more humans.

Currently about 40 percent of the earth’s surface is devoted to agriculture. And 75 percent of that land is used for livestock, most of which is actually used to grow grains for livestock, not for animals to graze directly. This means that the soil is tilled, the crops are sprayed, irrigation is applied – all the attendant resource use (and pollution) associated with food production, but for the purposes of feeding livestock. We’ve all heard about the water wars to come as the planet becomes increasingly crowded. Well, meat production accounts for a third of the planet’s freshwater resources.

So you get the picture: wealthy societies can continue to gorge on meat – in the US, the average person eats 270 pounds per year, the second most on the planet – while people in poor countries live on the edge of starvation. Or, we can make like the Indians and Bangladeshis, who consume an average seven and eight pounds of meat per person per year, respectively, and learn to do with less. Admittedly, part of the reason for such low meat consumption in those countries is poverty, but its also part of their culture – Hindus and Buddhists, like Seventh-day Adventists, eat very little meat for spiritual reasons.

But those who can’t live without a little bacon once in a while may actually be doing the planet a favor. One of the latest studies on the environmental impacts of dietary choices claims that a mostly vegan diet with a little meat is actually better for the planet than going 100 percent vegan. This is because there are parts of the planet that aren’t very suitable for agriculture, but are suitable for grazing animals in a sustainable way (think high mountain ranges). Chalk one up for the flexitarians.

A handful of talented chefs are helping hypocritical foodies like me have our environmentalist ideology and eat it, too. Tal Ronnen is the god among them: “I just can’t do the ‘throw some vegetables and a starch on a plate’ thing,” he once told the LA Times. “That’s the problem with most vegan dishes. It’s a portobello mushroom cap, or a pasta primavera, and when you’re finished with dinner you have to hit the drive-through. You have to give people something that will satisfy them. And that’s a protein-based plate.”

Ronnen’s upscale LA restaurant Crossroads Kitchen isn’t just known as the best vegan restaurant in the city, it’s one of the best, period. Supposedly, his vegan cheese rivals a fine Camembert. He is the rare vegan chef that meat-loving chefs respect. Ronnen’s exploits cooking for Oprah and Ellen DeGeneres have wrested vegan food from the grubby hands of hippie-crusader cooks and paved the way for a new generation of highly sophisticated meat-free chefs, such as Philadelphia’s Richard Landau and Daphne Cheng, whose secret (vegan) supper club events in NYC are legendary. If chefs can make veganism cool – and truly tasty – perhaps the masses will follow.

Vegan Chains Are Now a Thing

Fortunately, since most of us can’t afford fine dining – vegan or otherwise – on a regular basis, cheap nuevo vegan fare is proliferating. See Veggie Grill, for example, the ten-year old chain out of California: the company now has 28 locations throughout the US and they just received a $22 million investment to double that number and expand throughout the country. Another 100 percent vegan chain, by Chloe, based in New York, has recently expanded to Boston and Los Angeles, and has also announced plans to begin locating inside Whole Foods stores. When you’re abroad, keep a look out for Loving Hut, an Asian-themed vegan chain with more than 200 locations spread throughout Asia, Australia, Europe, and South America, as well as a few in the US and Canada.

When it comes to plant-based protein, we’ve moved way beyond tofu. Whatever your feelings about Soylent, there’s no denying its mega splash in the food world. Its makers don’t release sales numbers for their notoriously bland “meal replacement” products, but the company was supposedly shipping 30,000 cases in 2014, a year after starting production; and in early 2016, founder Rob Rhinehart said business was up 300 percent over the year before.

There’s a host of other techie meat substitutes in the works these days – from lab-grown beef to vegan cheese made with bioengineered yeast – which promise to make meatlessness part of the bedrock of the New World Order (or so their proponents say). But more meaningful to your average citizen who’d like to eat a little less meat are those that conjure up the happy feelings of biting into an actual burger. So rather than relinquishing food culture to a bunch of mad scientist chefs, check out some of the veggie burgers coming out these days.

In a recent review of veggie burgers available at New York eateries, the Times declared that “after decades as an amateur player eager for a big break, the veggie burger has made its ascent, becoming a destination dish and hashtag darling as never before.”

But the biggest wave in meatlessness may be yet to come. The Impossible Burger, developed by a former Stanford professor with major backing from Silicon Valley venture capitalists – and major props from chefs – is being touted as the first plant-based meat that tastes as good, and maybe even better, than the real thing. Its ingredients (mostly wheat, coconut oil and potato protein) require one-quarter the water and 1/20th the land to produce, compared to a beef burger, and emit 1/8th the greenhouse gases.

If Bill Gates and his fellow Impossible Burger backers are right, this maybe the beginning of the end for defining “meat” solely as something made from flesh. So far, the Impossible Burger is available only in four upscale restaurants – including one of proud carnivore David Chang’s Momofuku outposts – but mass production is set to begin soon.