If Trump Builds the Wall, What Will Happen to our Food System? - Modern Farmer
Food & Drink, Politics

If Trump Builds the Wall, What Will Happen to our Food System?

Let us count the reasons why Trump's attitude on immigration isn't just half-baked, it's an abomination for farmers, consumers, and the broader economy 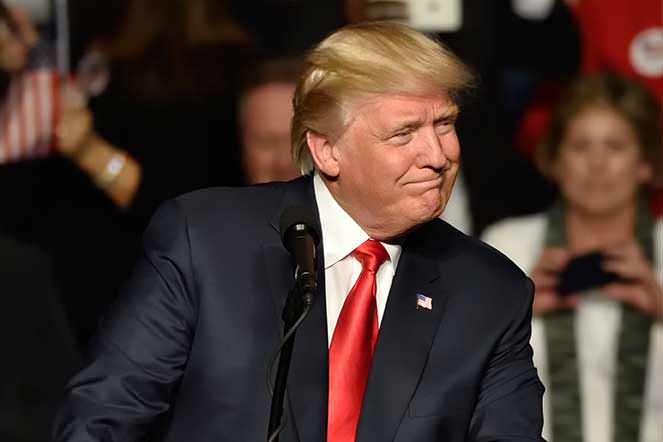 One of the most comprehensive studies on how immigration policy impacts the food system was commissioned by the American Farm Bureau Federation in 2014. Their report examines several policy scenarios, including what the authors refer to as the “enforcement only” option, which they define as “strengthened border security and… more aggressive use of deportation” – essentially Trump’s plan to date. The Farm Bureau strongly condemned this strategy, recommending instead “an adjustment of status for experienced, but unauthorized, agricultural workers” – in other words, making them legal.

The NMPF says to expect a 90 percent increase in retail milk prices if the immigrant labor supply is taken away from American dairy farmers.

Food Prices Would Go Up

The report found that stemming the flow of undocumented immigrants across the southern border – which currently accounts for between 50 and 70 percent of the agricultural workforce – would cause retail food prices to jump an average of five to six percent, and that “the quantity and variety of grocery store produce would diminish.”

Five or six percent may not sound like much, but for folks suffering from food insecurity it could make a huge difference in their diet, in terms of both quality and quantity, as the average SNAP (food stamps) recipient makes do on a food budget of just $4.23 per day.

The price shocks would not be diminished evenly across the supermarket aisles, with foods that are typically imported (like olives) or produced primarily with mechanized means (grains and legumes), staying roughly the same. The biggest price increases would be seen in the produce department – as fruits and vegetables are by far the most labor intensive foods to produce – though the researchers did not provide a specific number.

A study by the National Milk Producers Federation, however, found that the price of dairy products – also a very labor-intensive segment of the food system – would go up dramatically. The NMPF says to expect a 90 percent increase in retail milk prices if the immigrant labor supply is taken away from American dairy farmers.

Also, higher prices for domestically-produced foods would certainly drive up imports, which is bad for the economy – and for those counting their food miles.

Production Would Go Down, Farmers Would Lose Out

According to the Farm Bureau report, “closing the border” (i.e. building a wall) would greatly exacerbate existing farm labor shortages found in many parts of the country, resulting in crops left to rot in the fields and a vast reduction in agricultural productivity – which could put some farmers out of business.

“Many migrants who begin their careers as farm laborers move onto other sectors of the economy [with] less demanding positions after several years,” the authors noted. “This progression leads to farmers often being the first to bare the negative economic impacts of decreased border crossings and migrant labor shortages.”

“Closing the border” would greatly exacerbate existing farm labor shortages found in many parts of the country, resulting in crops left to rot in the fields.

Specifically, the report forecasts up a 27 percent reduction in meat production; up to a 31 percent drop in vegetable production; and as much as a 61 percent drop in fruit production. All told, farmers would see a 30 to 40 percent loss of net farm revenue due to the combination of lower production and higher labor costs precipitated by an enforcement only approach. Total agricultural output would fall by $30 to $60 billion. And according to the NMPF, one in six Americans dairy farms would likely close.

These are more than just what-if scenarios. In 2011, new legislation intended to crack down on illegal immigrant workers in Georgia left farmers in a panic: the state’s Agriculture Department said farmers were short 11,000 workers that summer. According to a survey by the University of Georgia, the new law caused about $75 million in losses among the state’s fruit and vegetable producers.

Similar results have been observed nationally in recent years. A 2015 study found that the ongoing farm labor shortage has caused a 9.5 percent drop per year in fruit and vegetable production nationwide, good for a loss of $3.1 billion annually in farm income.

Unemployed Americans Unlikely to Benefit[/mf_h2]Trump’s hard-line rhetoric on immigration is based on the premise that a porous border results in American workers losing out on job opportunities. While it’s not hard to see how voters could be persuaded with that line of thinking, the reality is not so simple. When it comes to field labor – planting, weeding, and harvesting – immigrants comprise the lion’s share of the workforce because Americans simply aren’t willing to do the same work, even if they’re unemployed.

Numerous studies have underscored this uncomfortable truth. A 2010 survey conducted by the National Council of Agricultural Employers found that 68 percent of the native-born workers referred by state unemployment agencies to agricultural employers did not accept jobs offered to them. Of those that did accept a job, only 5 percent stuck it until the end of their employment contract.

A 14-year study of the agricultural labor market in North Carolina found similar results. In 2010, for example, the state’s unemployment rate rose to 11 percent – equal to more than a half million job seekers – but recruiters were successful in placing only 30 workers in agricultural jobs, and of those, 30 percent quit before the end of the season.

The Economy Would Suffer

Not only would farmers take a hit if the immigrant labor pool dried up, the fallout would make waves in the larger economy. According to the Farm Bureau, in 2012 the farm labor shortage caused $1.3 billion in lost farm productivity, which rippled out into a $3.3 billion hit to the national GDP.

Many illegal immigrants actually pay taxes, though they use fewer government service per capita compared to citizens.

A 2015 study by the American Action Forum, which looked at all illegal immigrants, not just those working on farms, determined that full enforcement of existing immigration laws would cause the national GDP to drop 5.7 percent – $1.6 trillion – over the next 20 years. And a study by the Bell Policy Center in Colorado, which also focused on illegal immigrants as a whole, found that for every job filled by an illegal immigrant in the state, 0.8 additional jobs were created.

The reason that illegal immigrants contribute so much to the economy, besides performing heavy labor at a low cost to employers, is that they spend money in the cities and towns where they live just like anybody else. Plus, many actually pay taxes, despite their illegal status, though they use fewer government service per capita compared to citizens.

It’s been reported that the Social Security Administration receives over $7 billion annually in contributions from undocumented immigrants. And a 2006 report by the Texas state comptroller found that illegal immigrants residing in the Lone Star State contributed $424 million more to state revenue than they consumed in government services (education, healthcare etc), and added $17.7 billion to the gross state product.

And of course, conducting mass deportations and building a wall along the 1,933-mile southern border would come with a massive price tag to taxpayers. The American Action Forum estimated that it would cost $400 to $600 billion over a 20-year period to “enforce current law toward all 11.2 million undocumented immigrants, while keeping any new immigrants from entering unlawfully.”

As for the wall – since the chances of Mexico paying for it are next to zilch, despite what Trump claims – taxpayers would have to foot the bill for that, too. To give you an idea of what it would cost, when the Congressional Research Service looked into building a fence along the a 700-mile portion of the border back in 2007, they recommended against the idea: it would have cost around $50 billion over 25 years for construction and maintenance.

Even though Trump claims it’s all in the name of boosting the economy, a massive wall nearly 2000 miles long along the Mexican border is one of the most backward investments imaginable.

Related
Animals, Food & Drink
These Chicken Nuggets Are Anything But BonelessEmily Baron Cadloff
Animals, Food & Drink
Can Finding New Culinary Markets for Green Crabs Help Curb the Invasive...Tim Briggs
Environment, Fish, Water
The Oyster Farmers Working to Address Aquaculture’s Big Plastics ProblemBridget Shirvell
Environment, Opinion, Politics
Opinion: With Sky-High Fertilizer Prices, There’s an Opportunity to Grow Crops More...Kathleen Merrigan
wpDiscuz
We use cookies on our website to give you the most relevant experience by remembering your preferences and repeat visits. By clicking “Accept”, you consent to the use of ALL the cookies.
Cookie settings ACCEPT
Privacy & Cookies Policy