From a high-jumping llama to the oldest seed ever to sprout, there are some incredible farm-related world records out there.

“There are a lot of people who really get excited about anything agriculturally based and we have a lot of records in that area,” says Hannah Ortman, a Guinness World Record adjudicator (that’s what they call the folks who do the judging) and senior records manager for the U.S. and Canada, tells Modern Farmer in a phone interview.

The ag-related record attempts just keep coming, she says. A recent applicant plans to set the record for most mules plowing at the same time, a record that Ortman says has never been attempted. Meanwhile, here are ten ag-related Guinness World Records that have been set and that you’ll enjoy.

The current record for the highest bar jump cleared by a llama is held by Caspa, who hails from Wales and is owned by Sue Williams. In June 2015, Caspa leapt over a 3-foot, 8.5 inch high bar during Dogfest, an annual dog-related event in Cheshire, England. It’s an impressive feat, although we’re not sure how a camelid got invited to a festival dedicated to canines. 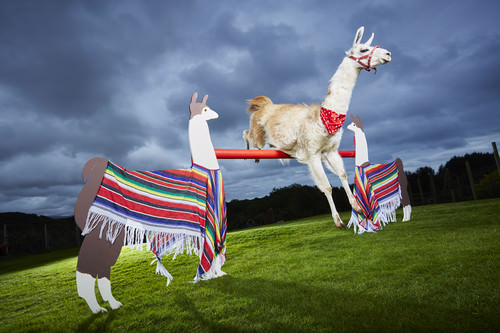 The heaviest potato in the world debuted at the National Gardening Show in Shepton Mallet, Somerset, in September of 2011. Heavy? Yes. Pretty? No. But what this knobby spud grown by Peter Glazebrook lacked in looks it made up for in girth, weighing in at an impressive 10 pounds, 14 ounces.

The record for longest journey by tractor goes to a German man named Hubert Berger who traveled across Europe between May and October of 2016 covering 15,769.38 miles. What makes this feat even more impressive is that Berger did it all on a vintage 1970 Eicher Tiger 2, which has a top speed of less than 2o mph.

Smurf, a Canadian Holstein cow owned by La Ferme Gillette Inc. Dairy Farm in Embrun, Ontario, is the Guinness World Record holder for highest recorded lifetime yield of milk. Born in September 1996, Smurf was 15 (and the oldest cow on the farm) when she was crowned queen of the milkers with 478,163 pounds of milk produced as of February 2012.

A cucumber plant at the Epcot Science project at Walt Disney World Resort in Lake Buena Vista, Florida, holds the record for producing the most cucumbers in one year. From March 24 to July 5, 2006, 2,078 pounds of cucumbers were picked from the plant. That is a lot of cucumber salad, my friend. 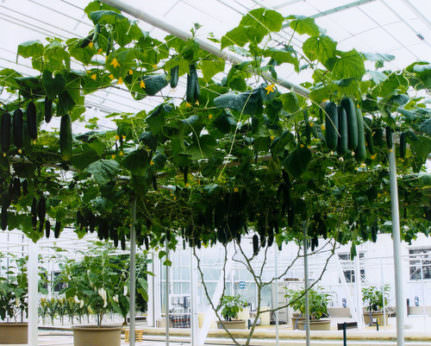 This cucumber plant holds the world record for producing the most cucumbers in one year. Photo courtesy of Guinness World Records.

Threshing Out the Record

The record for most threshing machines operating simultaneously is 139 and was set in July 2016 at the Manitoba Threshermen’s Reunion and Stampede in Austin, Manitoba. The record attempt was organized by the Manitoba Agricultural Museum and Canadian Foodgrains Bank to raise awareness and money to help end world hunger and to preserve Canada’s agricultural heritage.

The record for oldest pig ever goes to a porker named Ernestine who was born July 17, 1991 and was the beloved pet of Jude and Dan King and their daughters, Morgan and Rhiannon, from Calgary, Alberta, Canada. The Vietnamese pot bellied pig was 23 years and 76 days old when she passed away on October 1, 2014.

A Tough Egg to Crack

Some records come and go, while others have staying power. That’s the case with the heaviest chicken egg, a record that hasn’t been broken in more than 60 years. A White Leghorn from Vineland, New Jersey, produced one whopper of an egg back in February 1956. It weighed 16 ounces! Yep, it was a one pounder and contained a double yolk and double shell. You have to feel bad for the poor chicken that laid that monster.

Goat on the Go

Skateboarding isn’t just for kids – goats are also into the sport. Happie, Fort Meyers, Fla., is the current record holder for distance skateboarded by a goat at 118 feet, set in March of 2012.

A 2,000-year-old date palm seed discovered in the early 1960s during an archeological dig at Masada, an ancient fortification in Israel, holds the Guinness World Record as the oldest seed to germinate. The seed was planted by Dr. Sarah Sallon of The Louis Borick Natural Medicine Research Centre in the Hadassah Medical Organization, Jerusalem, and Dr. Elaine Soloway of Kibbutz Ketura, Israel, in 2005. Eight weeks later, it sprouted. The amazing plant, which is from an extinct species famous for medicinal uses, earned the name “Methuselah,” after the Bible’s oldest man. It’s still alive and well. It should be noted that a team of Russian scientists managed to sprout a 32,000 year old seed in 2012, but it hasn’t been verified by Guinness World Records.