Tapping Into A Simpler Way of Life - Modern Farmer
Lifestyle

Tapping Into A Simpler Way of Life

A chef and an artist traded their Brooklyn loft for a remote farm upstate - and built a pretty sweet existence from the ground up. 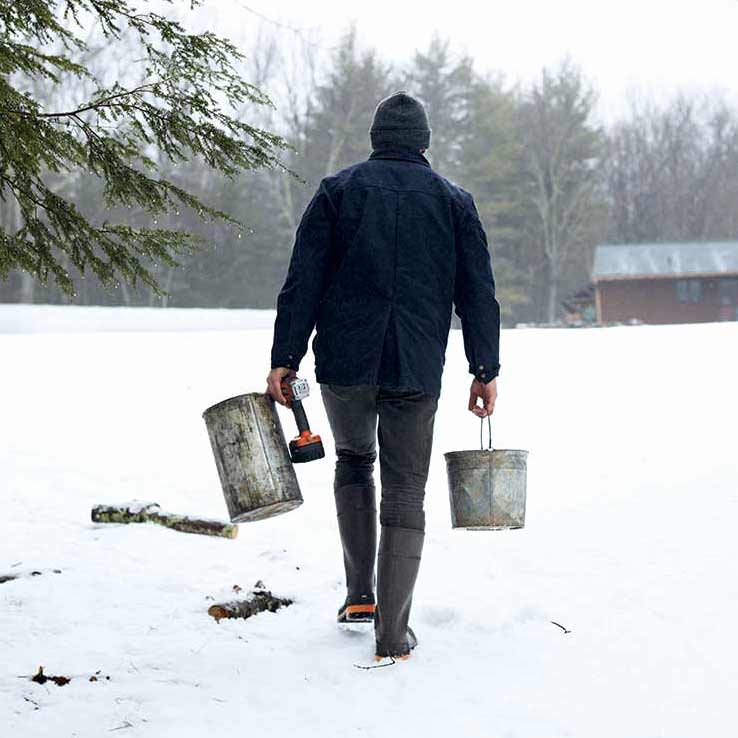 SIX YEARS AGO, as Chris Lanier and Dana McClure prepared to spend the first night in their newly purchased house, situated on a former cow pasture in New York’s Ulster County, the couple freaked out.

“We drove to buy groceries, and it took 15 minutes to get to a main road,” recalls Lanier, a food stylist and chef who has worked in such New York City restaurants as WD-50 and CafeÌ Boulud. “I was in the driver’s seat crying, trying not to let Dana see, and she was in the passenger seat crying, trying not to let me see. We were both thinking, We’ve just made the biggest mistake of our lives.”

Lanier and McClure, who met as two among many roommates in a sprawling industrial loft in Brooklyn’s Williamsburg neighborhood, had spent almost three years searching for a place of their own, preferably with a little dirt to play in. “Chris got tired of outgrowing our rooftop garden,” McClure explains. “We wanted actual land.” The hunt, within their price range, proved discouraging. The pair toured property after property that offered gorgeous tillable acreage – and a flooded basement. Or charming, move-in-ready cottages – surrounded by rocky, subpar soil. Finally, they bit the proverbial bullet and settled on a modular 1970s home with four acres in the Catskill mountains. “We picked it a bit out of frustration,” Lanier admits.

Right off the bat, he built a greenhouse and planted ‘French Breakfast’ and ‘Ping Pong’ radishes, ‘Green Zebra’ and ‘Cherokee Purple’ tomatoes, and other precious edibles he knew would appeal to former colleagues in the restaurant world. Those efforts yielded a plentiful harvest that first summer, in 2011. Lanier proudly delivered the produce to his chef friends in Manhattan, only to find their kitchen staffers so overwhelmed, they’d point to a surface and bark something about sending an invoice. “It was the worst feeling,” the 43-year-old says, “to work so hard nurturing little seedlings and have such a connection with these ingredients, and then to hand them off.” On each trip, he’d invariably get at least one parking ticket. “Sometimes I never even got paid.”

“The best way to earn any kind of living growing food is to add value. You have to make a product, like a pickle or a sauce – or cook it.” – Chris Lanier

Lanier soon realized that “the best way to earn any kind of living growing food is to add value. You have to make a product, like a pickle or a sauce – or cook it.” That epiphany led to an experiment: He and McClure organized a series of farm-to-table dinners, hosting the first few in Brooklyn as under-the-radar, word-of-mouth events. As word spread, the couple was commissioned to re-create the experience for small Brooklyn-based companies and bigger clients, including Nike.

Meanwhile, the duo began renovating their upstate place in earnest, converting a garage into a studio for McClure, 37, a visual artist who’s taught at Parsons School of Design and New York University, and starting the years-long process of restoring a 166-year-old barn near the house. Soon, Lanier and McClure realized they were logging more hours in Ulster County than in New York City – a luxury afforded by their anti-9-to-5 careers. By 2014, when their son, Parker, was born, the family had expanded the farm to include 50 hens and a comically inefficient yet satisfying small-batch maple-syrup operation. Last May, they cut the cord and moved to the Catskills full-time. “We couldn’t really invest in the house, in the barn, and in our new community,” explains McClure, “when we still had a foot in both worlds.” 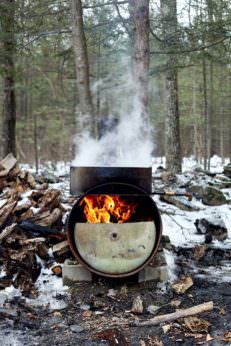 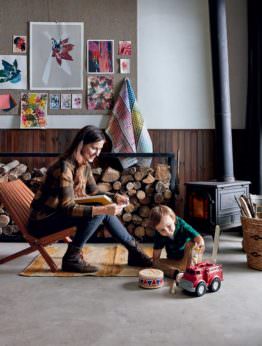 McClure plays with Parker in the property’s garage”“turned-art studio. 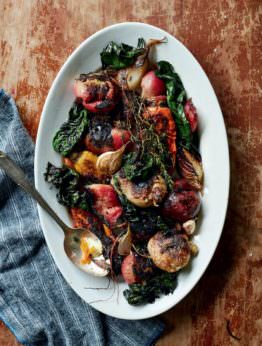 The secret to this seasonal side dish: fried, not roasted, root vegetables. 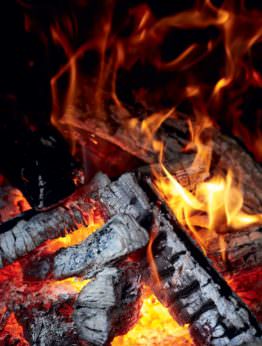 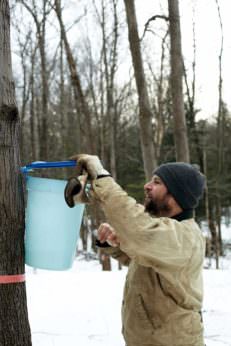 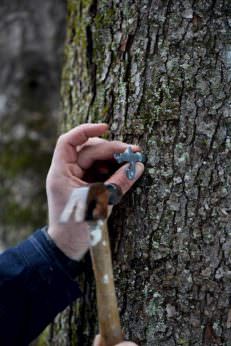 Each spile, as these metal spouts are called, incorporates a hook for holding a bucket. 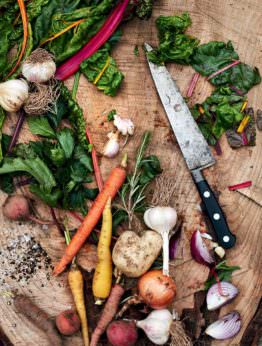 A tree stump serves as a chopping block when Lanier cooks camp fire-style. 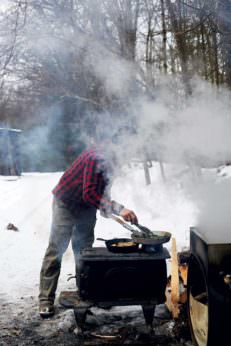 Lanier installed an outdoor woodstove to make the most of time spent “babysitting the sap.” 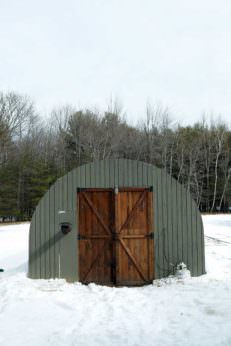 This propane-heated greenhouse gives LAiner a jump-start on the growing season. 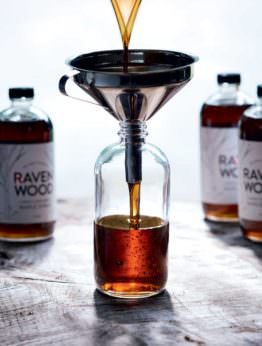 The couple reckons their 150 maple trees yield about 300 bottles of syrup a year. McClure designed the labels, which feature her pen-and-ink tree silhouettes and the farm’s name, Ravenwood. 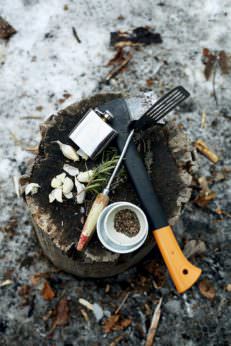 “I was chopping wood, cooking, and drinking when Christopher Testani captured this moment on lm,” admits Lanier. 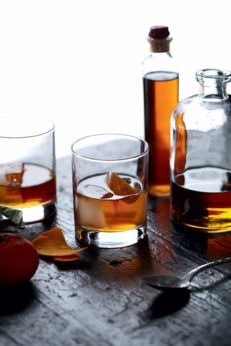 Maple syrup takes the place of sugar in Lanier’s signature take on the Old Fashioned. 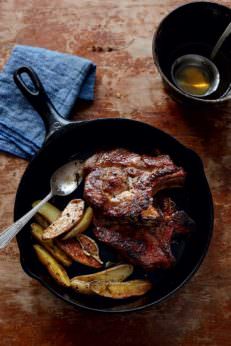 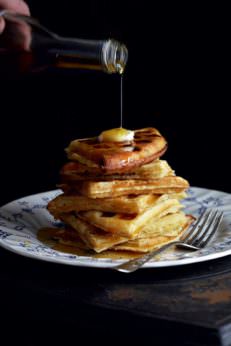 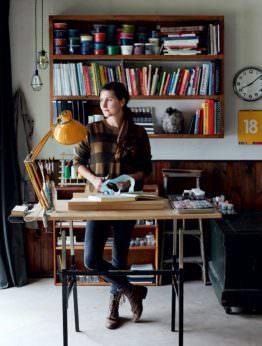 McClure’s art mixes painting and printmaking; her recent clients include Microsoft and the Conrad Hotel in Dubai. 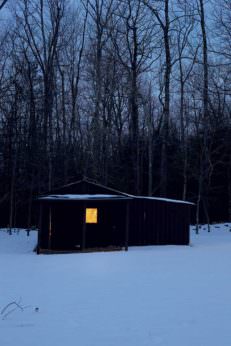 MILD SUMMER MONTHS, plus gorgeous spring and fall weather – and a borderline-shameful Amazon habit (“our dirty little secret,” jokes McClure) – make rural living easy enough. “The holiday season is so special here,” says Lanier, “but after that, winter goes on a bit too long.” He credits the February and March sugaring season as the only sweet spot during the stir-crazy weeks before it’s finally time to start seeds again. Lanier and McClure wait until the days warm up but the night temperatures remain below freezing to tap their 150 maple trees.

“When I first started doing this, I could not believe the insane amount of work that goes into producing syrup,” says Lanier, who collects sap in buckets and carts the haul to an evaporator. (He recently upgraded from his DIY contraption to a professional version, forged by a Pennsylvania metalworker.) Maintaining the liquid at a steady boil without burning it requires hours of attention.

To occupy himself, Lanier built a makeshift kitchen nearby, using stumps as countertops and the snow as a cooler. This campfire-style setup, a drastic departure from “cutting vegetables into perfect little squares
at fancy restaurants,” combines the Texas native’s rough-and-ready BBQ roots with the local bounty. “I love cooking over an open flame because some bites get very charred, others not at all,” he says. “It’s all happy accidents.” Lanier pan-fries root vegetables stored in their cellar and roasts cuts of meat from nearby suppliers, glazing them with his maple syrup, which finds its way into virtually everything the family eats: “Oatmeal, ice cream, cocktails, coffee, you name it,” McClure says. The couple plans to start selling the syrup this spring.

Even when waist-high snowbanks render the property’s gravel road impassable, Lanier and McClure don’t blink an eye. Each morning, McClure accompanies a bundled-up Parker as he collects eggs in the chicken coop.
Then, while Lanier boils sap, McClure paints and makes prints in her studio, heated by a woodstove. Beginning in May, the couple will host a pop-up restaurant of sorts in the 19th-century barn, and McClure is already dreaming of the site’s next iteration. “I’d love to carve out a corner to showcase local artisans making beautiful pieces here, and all over New York State,” she says.

For now, though, it’s largely hibernation time at Ravenwood, punctuated by casual meals and fireside cocktails. “You really can’t fight this weather,” Lanier says. “You can’t Google when will the power come back on? It forces us to slow down. We’ve learned to appreciate that.”