The Other Cannabis - Modern Farmer
Plants

Even in Colorado, breeding hemp means grappling with all sorts of legal red tape. One plant biologist hopes to beat the odds. 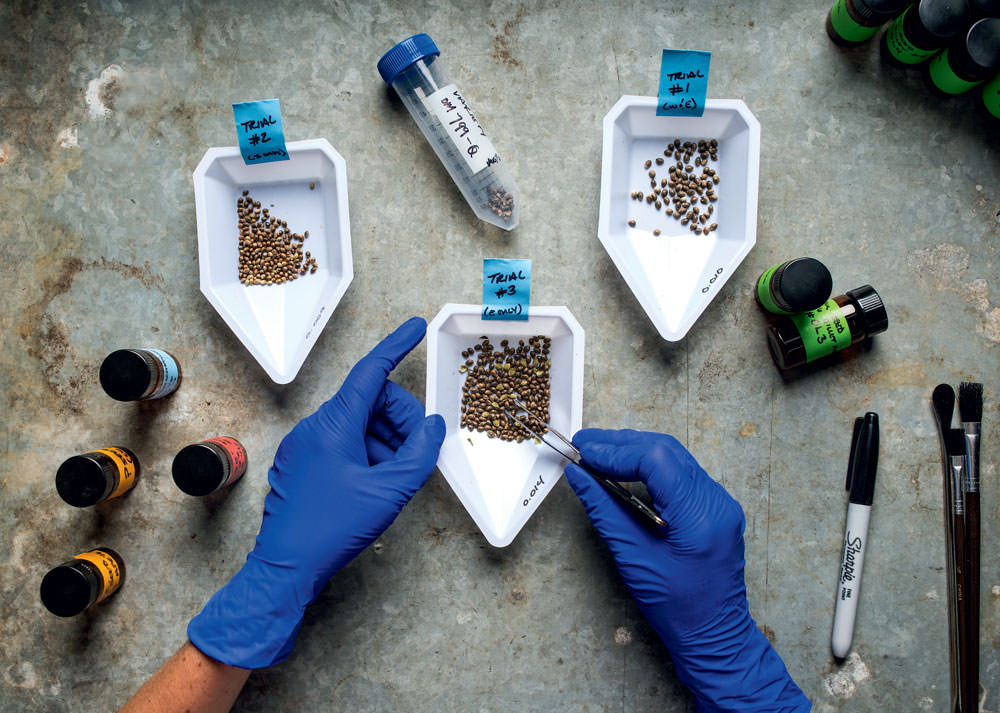 Bear Reel cuts a tiny figure on the vast Colorado plains, but she lives up to her name in ferocity of spirit. She has to. The 34-year-old occupies a decidedly unorthodox niche: a 21st-century scientist breeding new varieties of an ancient plant that’s also a controlled substance.

Reel would love to travel the country, collecting seed from these wild plants, but won’t. “I refuse to flout the law,” she says. “I’d rather change it.”

Reel specializes in Cannabis sativa, commonly known as marijuana – at least when it contains significant amounts of psychoactive tetrahydro-cannabinol (THC). Because her end goal is medicinal hemp, however, she takes great pains to tamp down the plant’s THC levels while boosting the anticonvulsive compound cannabidiol (CBD).

In Colorado, where she works, pot and hemp are permissible by state law. And the U.S. government looks the other way so long as cannabis-friendly states maintain appropriate regulatory oversight. But nationally, the feds draw a line at 0.3 percent THC. Above it, C. sativa becomes marijuana; below it, mere hemp, which can be legally imported from abroad as products or in the form of stems, stalks, and nonviable seeds. Things get iffy, though, the moment hemp is shipped from one state to another, because states regulate it differently.

Further complicating matters for Reel? University labs, fearful of losing federal research dollars, have often refused to test her hemp plants’ THC levels. USDA extension agents can’t provide cannabis-related assistance. While other crops benefit from the research of public plant breeders, typically situated at land-grant universities, Reel has no one. She could request genetic material from national seed banks – if they hadn’t been ordered to destroy their cannabis caches following the passage of the Controlled Substances Act in 1970.

“When I describe my job, I tell people, ‘Imagine it’s 50 years ago,’” she says, lamenting the lack of available tools. “We’re actually designing and building our own agricultural equipment, because nothing exists for processing hemp the way we want to.”

Since 2014, Reel has been employed by CW (short for Charlotte’s Web) Hemp, named for Charlotte Figi, now 10, who once suffered 300 seizures a week as the result of Dravet syndrome, a rare form of epilepsy. Her mother, Paige, contacted the Colorado-based medical marijuana company Stanley Brothers four years ago, after learning that it was growing high-CBD hemp strains. When Paige reported back to the Stanleys that their hemp oil had reduced Charlotte’s seizures to only a few per month, the brothers decided to launch CW Hemp, and brought Reel, a plant molecular biologist, on board. 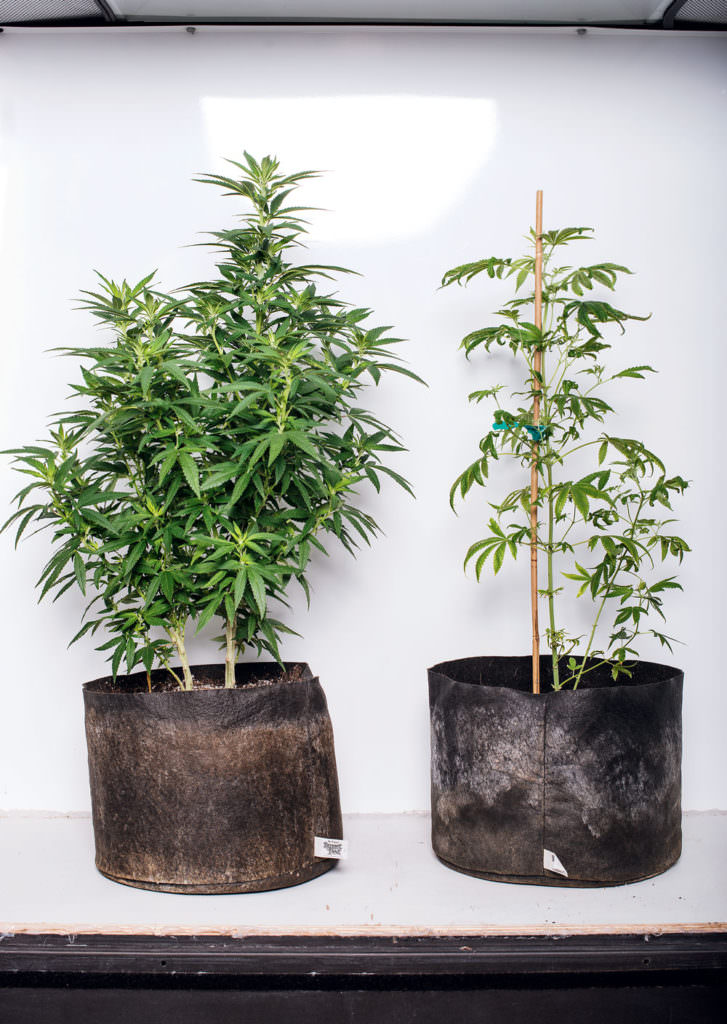 In a plant trial, one of Reel’s breeding lines (left) outperforms a popular variety of medicinal hemp.

Reel has already established one of this country’s most diverse and unique collections of hemp. Some 170 miles east of Denver, in Wray – on a two-acre plot rife with pocket gophers, kangaroo rats, and biting flies – she oversees 15 different populations, or breeding lines, from which she plans to coax five varieties in the near future and, perhaps, a few hybrids down the road. “These are my babies,” the scientist says of the motley population she’s cross-pollinated and diversified to “create a beautiful genetic pool to play with.”

In addition to those breeding grounds, CW Hemp maintains 20-plus acres in agricultural production. Ray Sitorious, director of the company’s farm operations, gestures toward his tidy rows of C. sativa clones and says, “I spent 20 years in Nebraska trying to kill this plant.”

“It’s called ‘weed’ for a reason,” Reel explains. “There’s a lot of cannabis out there, though legally there shouldn’t be.” The plant grows wild throughout the plains states, some of it vestiges of the 1940s Hemp for Victory campaign that encouraged U.S. farmers to supply fiber and cord during World War II. Reel would love to travel the country, collecting seed from these wild plants, but won’t. “I refuse to flout the law,” she says. “I’d rather change it.”

“Bear has her hands full,” admits Duane Sinning, director of the Plant Industries Division at the Colorado Department of Agriculture, which expanded its purview to include commercial cannabis production in 2013. “Farming’s hard enough when you have the usual support. For hemp, it’s taken three years just to get our state universities involved with variety trials.”

Still, the plant’s promise remains undeniable. “In a state with a lot of dry land and shrinking aquifers, farmers are looking for alternate crops. More than 25,000 uses have already been identified for cannabis,” Sinning says, pointing to applications that range from building materials and cosmetics to clothing and medicine.

But because C. sativa remains a federally controlled substance, there’s been little research in the United States regarding hemp’s ability to treat epilepsy, Parkinson’s, and other neurological disorders. (Charlotte’s Web oil must be sold as a supplement and can make no medical claims.)

Inspired by Charlotte and Paige Figi, and others helped by hemp, the Stanley brothers also established a nonprofit affiliate, Realm of Caring, around the same time they launched CW Hemp. The foundation, which exists to educate the public about the possible benefits of high-CBD C. sativa, currently serves 28,000 families interested in the plant’s potential. For Heather Jackson, who runs Realm of Caring, the cause is intensely personal.

Jackson’s 13-year-old son, Zaki, landed in hospice care six years ago, after 17 pharmaceutical drugs failed to ease his seizures. Charlotte’s Web hemp oil greatly reduced the number of seizures Zaki was having within three months. Now Jackson is determined to advocate for patients in similar situations.

The Stanleys’ altruistic aims aside, Reel is on staff at the brothers’ private, for-profit hemp company, which calls for patenting intellectual property – a highly charged directive whenever plants are involved, and especially fraught once cannabis enters the equation. Traditionally, the U.S. Patent and Trademark Office has rejected applications for cannabis strains, citing a 1946 trademark act that prohibits “immoral or scandalous” material. But on August 4, 2015, patent number 9095554 – the first-ever issued for high-THC marijuana – was approved. Now applications for both pot and hemp are streaming into the office.

Reel, who laments the need to keep the details of her research secret, sees hope for more public cannabis breeding, and collaboration, in the future. The 2014 Farm Bill authorized state departments of agriculture and institutions of higher learning to grow industrial hemp as part of pilot research programs, if production is not prevented by state law. Thus far, 24 states have removed barriers to hemp cultivation.

“The social and political climates have become much more open to the crop, and what it can do for
our country,” Reel says. “Hemp can improve the quality of life for so many people. All these little seeds I collect and tend are literally growing history. Sometimes I wonder if they grasp their own importance.”

Who told you about CBD when you were still in college?