Man Paints Murals to Bring Attention to the Plight of Honeybees

Imperiled bees provide the subject matter - and the cause - for a North Carolina painter. 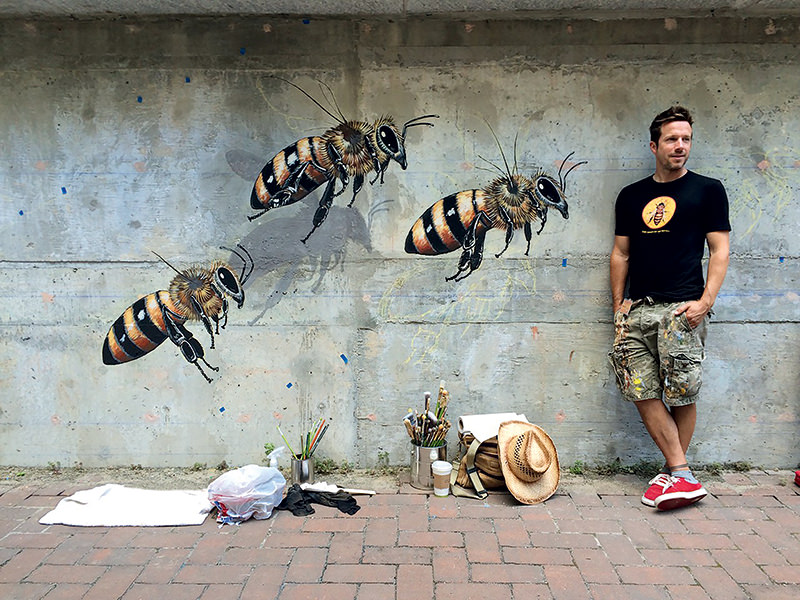 Matthew Willey painted this mural at the North Carolina Museum of Natural Sciences, in Raleigh, as part of his campaign to raise awareness about honeybees.
Photography Courtesy of The Good of the Hive
Share
Tweet
Pin
Email
14K Shares

Since 2015, when the Asheville, North Carolina, artist launched his “The Good of the Hive” campaign, he has completed eight murals containing more than 1,100 bees. But Willey won’t accept commissions from just anyone. Clients must convince him that they’re truly committed to the cause. So far, the select group includes Raleigh’s North Carolina Museum of Natural Sciences; the Durham, North Carolina, headquarters of Burt’s Bees; and the Harold P. Curtis Honey Company, a 62-year-old family business in LaBelle, Florida.

Willey first became interested in the pollinators eight years ago, after watching a bee die slowly in his studio. Sick bees, he learned, instinctively (and altruistically) leave their hives in an effort to ensure the survival of the larger colony. Encouraged by the selfless act, the 47-year-old decided to devote himself full time to The Good of the Hive. In addition to fees paid by clients, the initiative is financed by donations and the online sales of T-shirts, prints, and skateboard decks. “I want to take these small, misunderstood creatures and paint them really big, so people will learn about their startling decline as well as their incredible importance,” explains Willey. “Everyone on the planet should know what’s going on with our bees.” (thegoodofthehive.com)