The West has a little more than altruism on it's mind when it comes to supporting African agriculture, according to a new report. 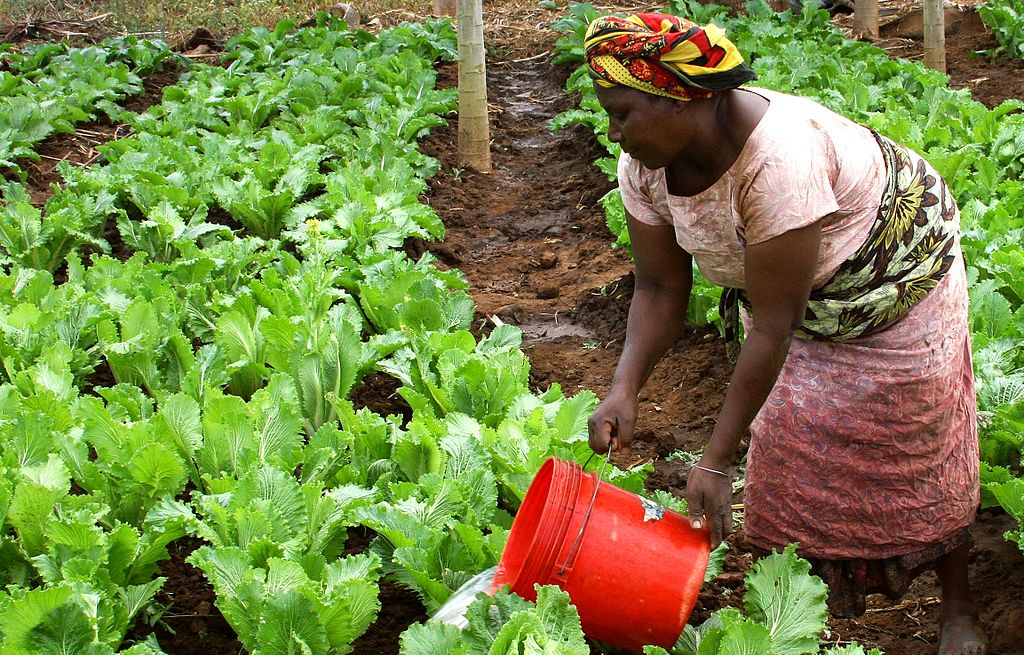 Western donors, including the Bill and Melinda Gates Foundation, are putting their money and power behind promoting a market-based, pro-agribusiness model for developing countries through a World Bank program, Enabling the Business of Agriculture (EBA), according to the report released earlier this year, titled “The Unholy Alliance: Five Western Donors Shape A Pro-Corporate Agenda For African Agriculture” from the Oakland Institute – a progressive California-based policy think tank.

The EBA project was developed in 2013 by the World Bank as a benchmarking tool aimed at fostering “policies that facilitate doing business in agriculture and increase the investment attractiveness and competitiveness of countries.” The project, which is being bankrolled by the governments of the U.S. – through the federal USAID program – U.K., Denmark, the Netherlands, and the Gates Foundation, looks at a variety of areas, including seeds, markets, machinery, transport, and finance, to determine if a developing country’s laws “negatively affect agriculture and agribusiness markets.” The World Bank and its donors say this will help boost agricultural production in an effort to feed a world population that is estimated to be 9.6 billion people by the year 2050.

Unlike in Western industrialized countries, traditional small-scale farming is still a predominant livelihood in most African nations. Such an approach to agriculture may put food on a villager’s table, but it does not engage the macroeconomic levers of trade and high finance that characterize first-world economies. The World Bank and its allies in the halls of government and corporate boardrooms stress that pushing African agriculture in that direction offers the best hope of alleviating rural poverty – improving yields, creating jobs in food processing and agricultural technology, and offering smallholder farmers the opportunity to scale up – in a “rising tide lifts all boats” kind of way.

The Oakland Institute’s policy director Frédéric Mousseau, an economist who is the lead author of the report, sees such an approach as a capitalist delusion about how best to solve the problems of Africa’s rural poor, and one that is shamelessly couched as “foreign aid.”

The report makes the case that in its effort to “enable the business of agriculture,” the EBA is effectively enabling a “race to the bottom” as these countries try to outdo each other in loosening trade restrictions in a bid to attract more investment money from the Western world. Governments in countries such as Kenya, Malawi, and Ghana, are spending hundreds of millions of dollars on fertilizer from Western corporations, says Mousseau, funding that could go to support more sustainable options for Africa’s small farmers, instead of pushing them into the endless cycle of buying patented seeds and chemical inputs.

One of the biggest concerns raised by the report is the phenomenon of “land grabbing” in Africa – where foreign corporations buy up enormous tracts of land to install monoculture plantations, or merely for the sake of real estate speculation. The Oakland Institute has for years worked to expose such schemes, which are typically enabled by corrupt local governments and often result in farmers being evicted from their traditional lands to make way for “more productive” agriculture. The land grab story has been sensationalized in the international media, but as with any situation where outside groups wage campaigns on injustices against marginalized groups in far-off places, it can be hard to parse what’s fact and what’s myth.

An investigation by Foreign Policy, for example, revealed that several widely circulated stories about alleged African land grabs have centered on proposed real estate transactions – the prospective buyers drastically scaled back or abandon their plans entirely once they realized that turning a profit from parched land with little to no transportation access or other infrastructure available would be less feasible than they thought.

But there is ample evidence that such unscrupulous practices do occur, even if it’s not at the scale that is often depicted. It’s all the more worrisome if seemingly well-intended aid organizations are involved. The Oakland Institute’s report may sound like conspiracy theory, but there are some facts worth considering.

The Gates Foundation has long been accused of encouraging unsustainable industrial agriculture practices through its philanthropy, and even of having financial ties with agribusiness giants like Monsanto. The foundation has indeed employed a number of former agribusiness executives, lobbied for the introduction of GMO seed varieties in Africa (most African countries still ban the use of GMOs) and once held Monsanto stock. But they also fund programs that directly benefit small African farmers and the environment, such as an initiative to empower female farmers to have more equitable roles in agriculture and an ecological monitoring program that encourages small farmers – which are often driven by poverty to overgraze the land and engage in slash-and-burn style agriculture – to be better stewards of the environment.

In defense of their support of the EBA program, Brantley Browning, the senior program officer for global policy and advocacy for the Gates Foundation, tells Modern Farmer that the EBA generates “robust evidence about the nature and extent of the laws and regulations” national governments in developing nations need to attract investment for agriculture, from small farmers to medium-sized agribusinesses. “We welcome responsible international investment in agriculture in developing countries where there are demonstrable and sustainable net benefits to smallholder farmers, local agribusinesses and the wider economy,” Browning says in an email. “Alongside our investment in the EBA, we support governments in their efforts to improve R&D, extension and input delivery activities that promote sustainable productivity, income growth and food security for smallholder farmers.” (The EBA did not respond to emails seeking comment for this story.)

However, Bill Gates is an unabashed advocate of using biotechnology to improve yields while reducing the environmental impacts of agriculture, telling the Wall Street Journal earlier this year that he believes GMOs are an essential tool in his foundation’s mission to help end starvation in Africa.

The Gates Foundation is the primary benefactor of the Cornell Alliance for Science, a group founded to “depolarize” the GMO debate in the media and in popular rhetoric. Gates and the Cornell group promote GMOs and other modern agricultural technologies as a boon to social and environmental causes, but their ties to profit-motivated corporations tend to create a different image in the public eye. The Oakland Institute report points to several GMO research projects in Africa that have been undertaken by either non-profit academic insitutions or civil society groups, yet are supported by the Gates Foundation, USAID and Monsanto (among other philanthropic, corporate and governmental entities), as evidence of a conflict of interest.

The Water Efficient Maize for Africa project, for example, aimed at developing genetically engineered corn that is more productive than traditional varieties, yet less dependent on irrigation, has received royalty-free donations of technology from Monsanto, along with $85 million from the Gates Foundation in support of its work. Anti-GMO activists see such “non-profit” GMO projects as Trojan horses for persuading African countries to relax their restrictions on biotechnology.

Sarah Evanega, director of the Cornell Alliance for Science, downplayed the Gates-Monsanto connection in a conversation with Modern Farmer, however. She explained that the Gates Foundation once owned Monsanto stock, but that, technically, it was the foundation’s “asset trust” which held the stock. “It’s a completely separate entity,” says Evanega, “there is a firewall between the two. The foundation itself does not have any financial relationship with Monsanto – that’s an urban legend.” Firewall or not, the association between the two is evidence enough for the anti-GMO camp to lay guilt on the world’s largest philanthropy.

The political climate in Africa has not allowed the use of patented GMO seeds to vast extent that has occurred in North America, which folks like Mousseau think is a good thing. He’d rather see the focus of international aid shift to less expensive and more sustainable approaches than those being promoted by Western interests. There are inexpensive and effective ways to increase yields without relying on expensive chemical fertilizers and pesticides, he says, pointing to the System of Rice Intensification (SRI), an agroecological growing method focused on managing the plant, soil, water, and nutrients, as an example. In Timbuktu, Mali, the SRI method is being used to grow up to nine tons of rice per hectare with very little fertilizer and irrigation.

“You need government policies, mechanisms, and institutions, like we have in Europe and the U.S., that can aid farmers and protect them when they have big problems, and help them sell their crops when they’re doing well. Expecting that by having Monsanto and other corporations come in the solutions are going to follow just isn’t going to work,” says Mousseau. That may be true, but folks like Bill Gates are not afraid, or ashamed, to use the tools of capitalism in pursuit of high-minded goals. Hopefully they can stay high-minded as they befriend such strange bedfellows.

Your progrmme is very interested when i read it. I have form a coommittee to and told them let’s form an association which will deal with food security to alleviating povery and hunger in the whole states of south sudan in the furue.

Your program is very interesting.
Hence,I’m therefore looking forward for partnerships with your Organization to empower poor rural communities, economicaly. The Association aims at improving food production security in the whole State to alleviate poverty, hunger and nuturstion.
Mision:To produce more food so as to eradicate poverty, hunger, nutrition ete, With in the rural poor communities in the state.

Your program is very educative and interesting to me when I read about it.i have form a group that deals in watermelon farming of about 4hecters to improve on household incomes and eradicate food insecurity in my area and I will be happy if I can get a support to engage in large scale farming.am located in kasese district Western Uganda Uganda.

We are farmers and we need a financial support from you so we can develop our agriculture in our rural areas in West Africa Sierra Leone.