The Descendants: Meet the Family Behind Space on Ryder Farm

How a young actress turned her ancestral farm into fertile ground for the arts - and found love along the way. 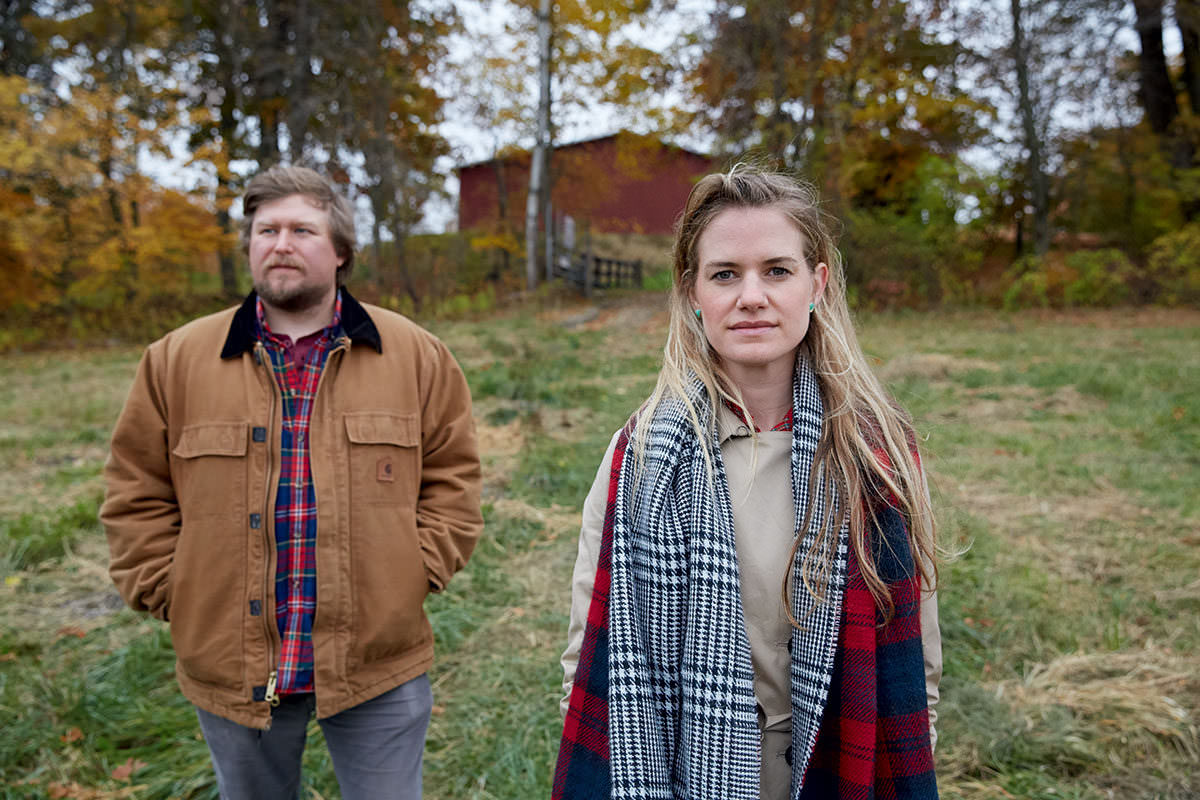 It was a plot twist he didn’t see coming. Three years ago, Michael Chernus innocently agreed to do a reading of a pal’s play on a farm in Brewster, New York – and wound up radically altering the course of his life. Chernus found himself “blown away” by Ryder Farm‘s ag-centric artists’ retreat. “It’s hard to avoid cheesy metaphors, because they’re apt,” says the 39-year-old actor, best known for his role as Cal Chapman on Orange Is the New Black. “You plant seeds here. They grow organically. But this place is also a fertile field for creativity.”

If the above description seems overly sentimental, Chernus has a good excuse. He didn’t just fall hard for the inspirational potential of a few Rhode Island Red chickens or the endless rows of lacinato kale. A young woman, among the seventh generation of Ryders to work the land, stole his heart and refused to give it back. 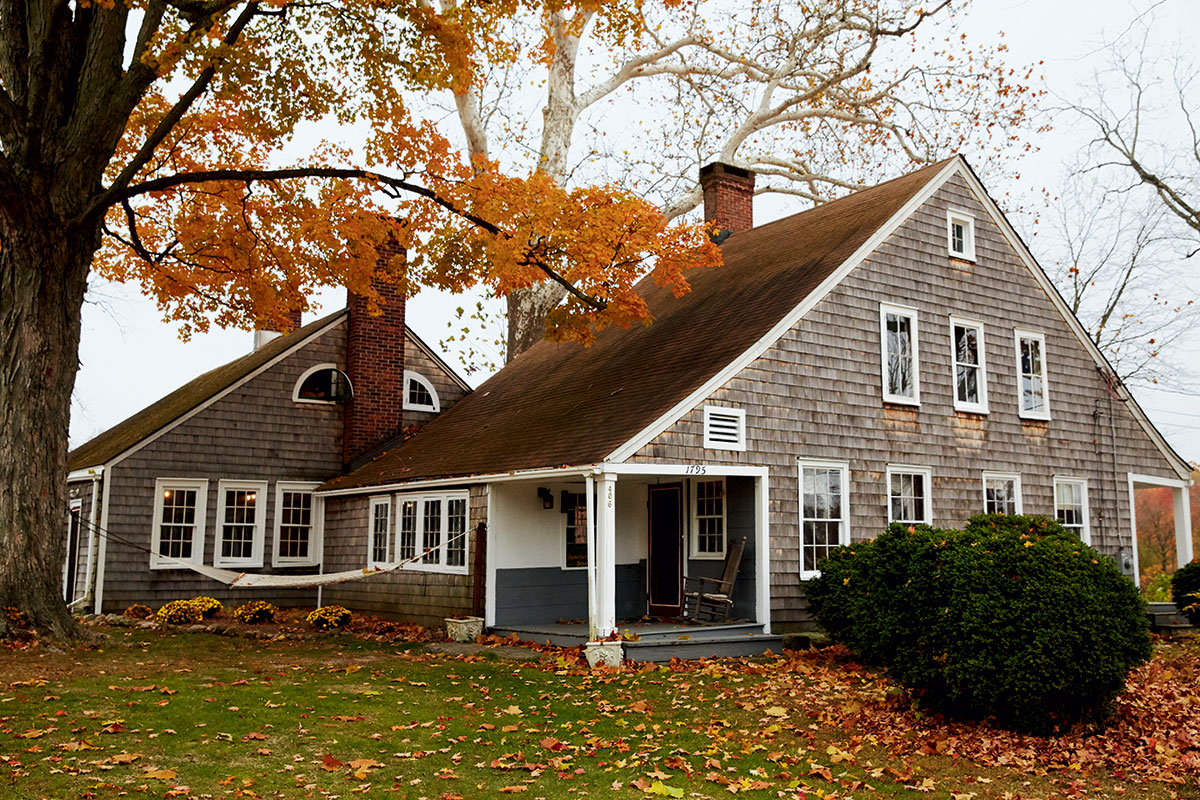 The centuries-old farmhouse was dubbed The Sycamores after two giant trees that once bordered it; only one remains.

Emily Simoness can trace her claim to these 127 acres in New York’s Putnam County to 1795 – the year her great-great-great-great-grandparents, Eleazer and Mary Coe Ryder, purchased the parcel, which predates the county itself. Simoness, however, hadn’t set foot on the property until early 2009. Then sharing a Brooklyn apartment with two roommates and juggling auditions with gigs as a coat-check attendant, nanny, and restaurant hostess, the actress decided to reconnect with her roots, cold-calling a fourth cousin once removed: current farm manager Betsey Ryder.

“Growing up in suburban Minneapolis, Ryder Farm was this folkloric place on the East Coast,” Simoness recalls. “My mom hadn’t even been there. But we received an annual shareholders’ newsletter with a black-and-white image of the main farmhouse. It was really my only touch point.”

And, suddenly, she was able to touch it. As Simoness walked through the farmhouse, called The Sycamores, she came across 19th-century writing desks, a fainting couch, dusty books left behind on window seats. “It felt completely frozen in time,” she remembers, “like I’d been transported to the 1800s.” In one bedroom, a single portrait – of an ancestor who’s a dead ringer for Simoness – hung on the wall. “And that was the next mental cartwheel,” the 32-year-old explains. “Remembering that I was related to all these people.” 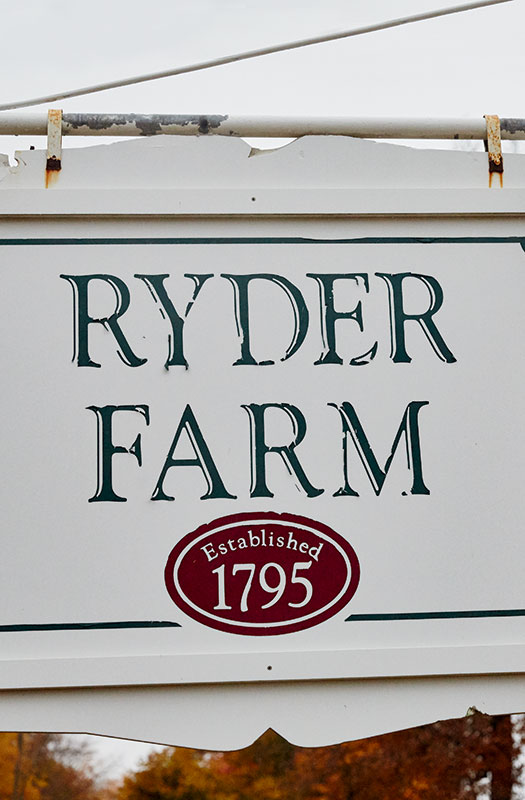 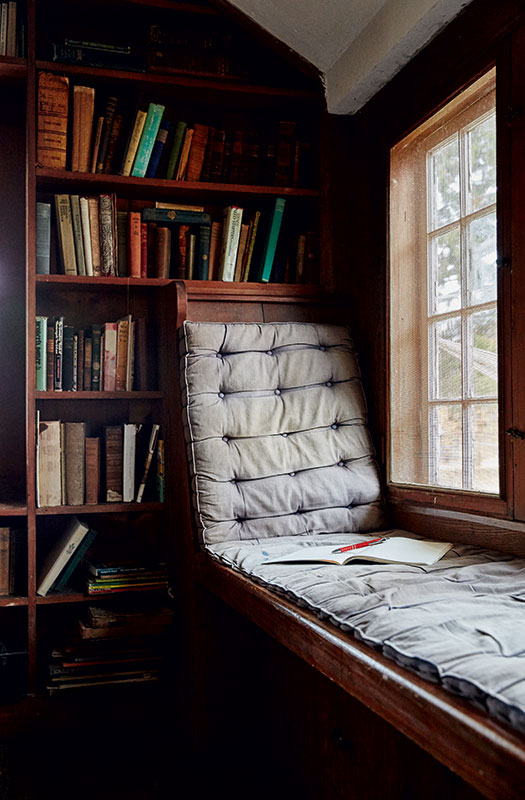 A family member constructed this built-in window seat during the 1920s. 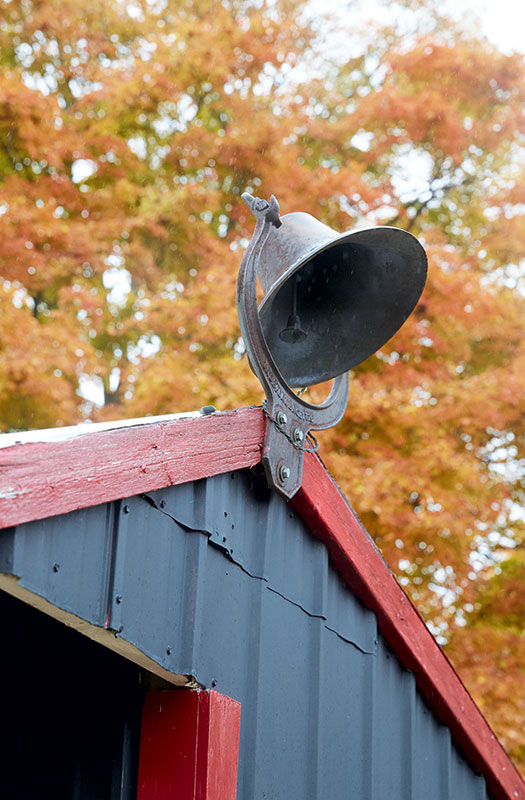 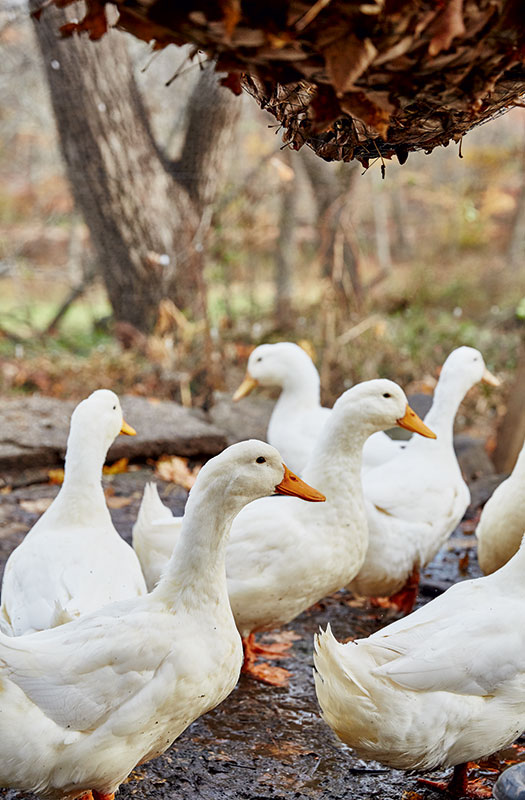 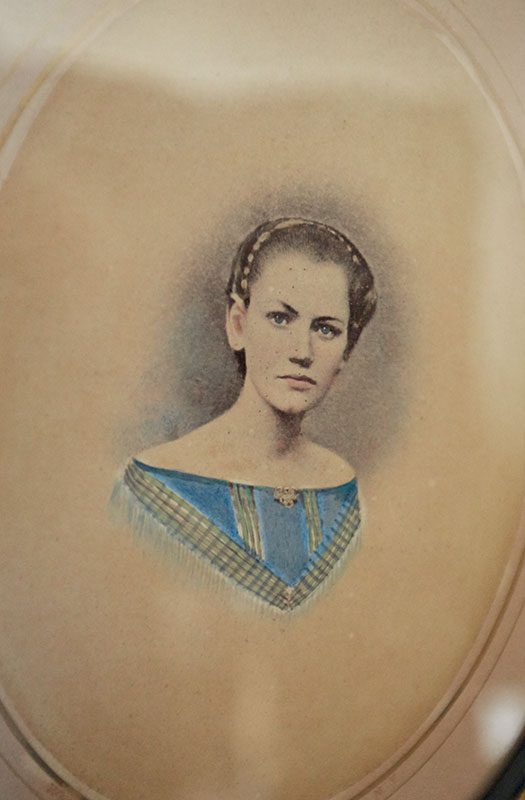 Annette Elizabeth Ryder (b. 1840) bears a striking resemblance to Simoness. 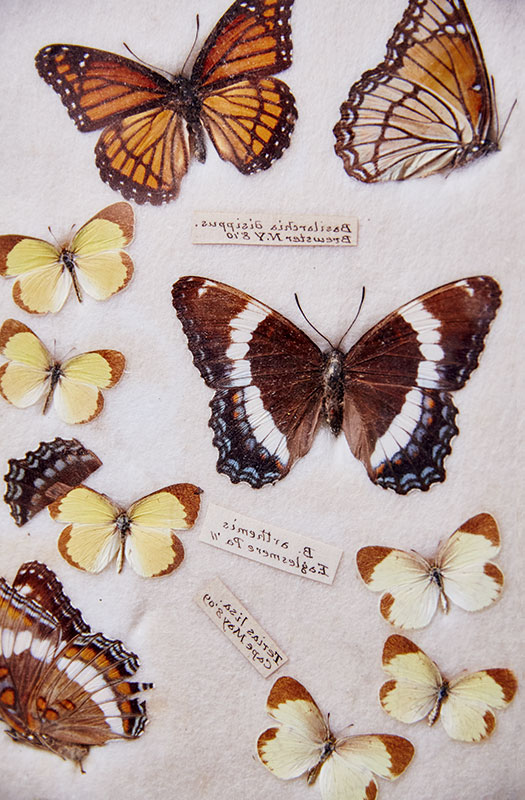 Butterflies under glass are among the heirlooms in the farmhouse. 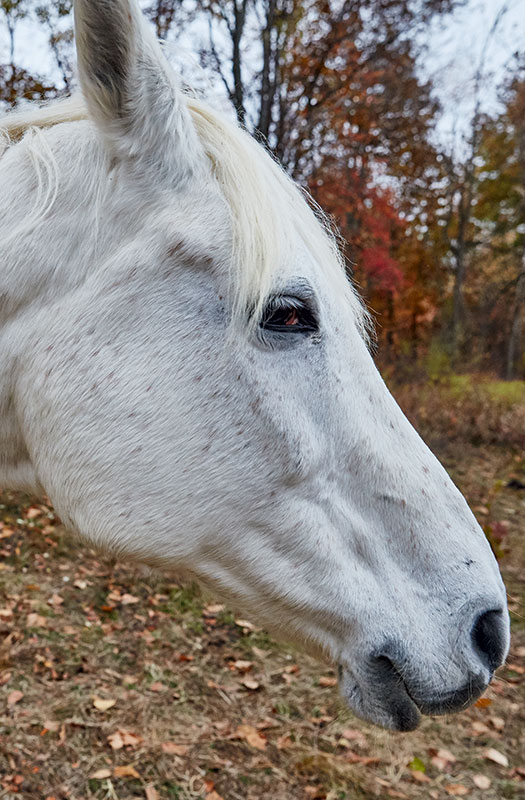 Nike, a retired polo pony, lives a life of leisure on the grounds. 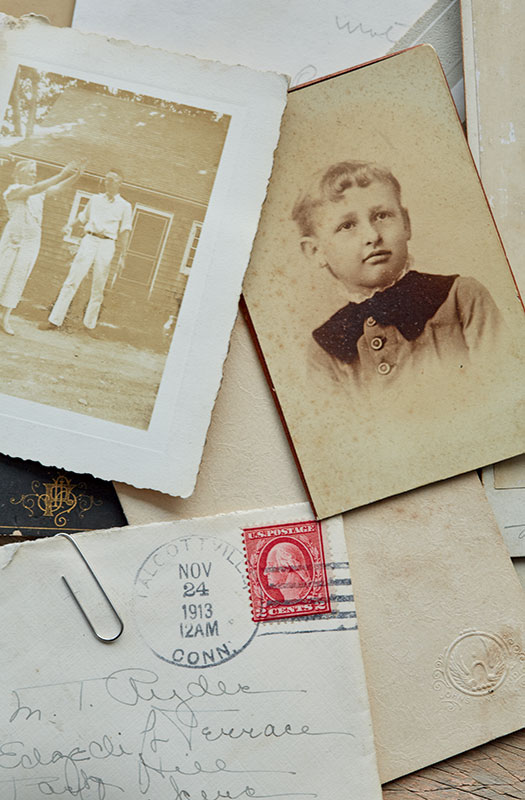 Simoness discovered a cache of photos and letters stashed in the house. 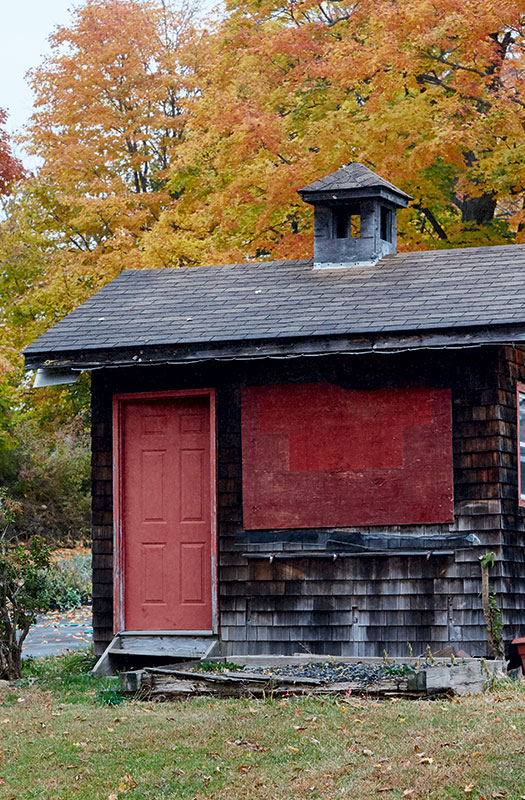 This former farmstand is now used for storage. 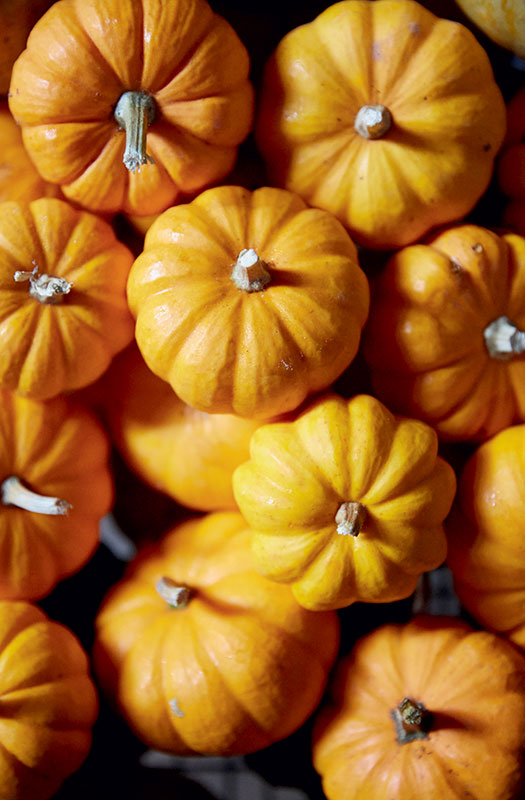 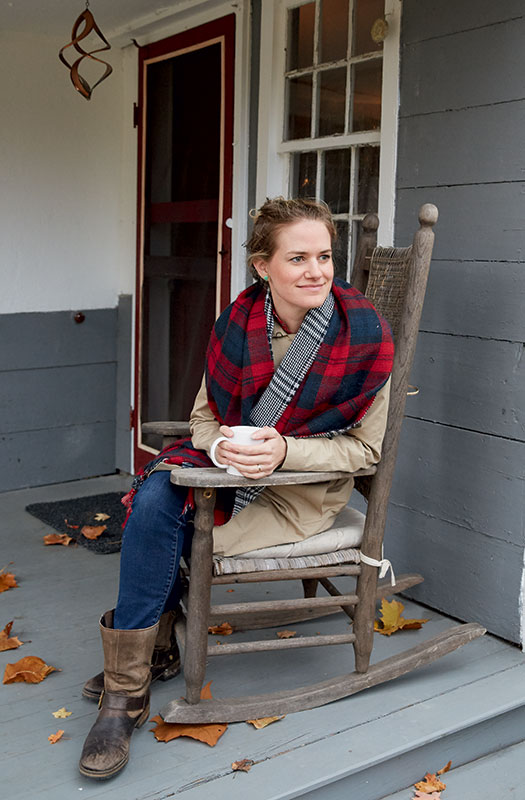 Simoness now lives on the farm six months out of the year.

That summer, Simoness paid her distant cousin another visit, this time at Manhattan’s Union Square Greenmarket, and proposed a trade: She and her twentysomething actor friends would put in the sweat equity necessary to fix the farmhouse’s sagging ceilings and peeling walls in exchange for a wide-open place to experiment with their art. Says the actress of her pitch, “It wasn’t neat and tidy, but Betsey was game.”

It turns out Simoness wasn’t the first prodigal daughter to return home. Back in 1978, a 22-year-old Betsey Ryder was driving from her native Long Island to Boston in search of a nursing job when she decided to stop by the farm where she’d attended family reunions as a girl. “I had a Great Dane puppy in tow and couldn’t find a place to stay,” Ryder remembers. At the time, another cousin, Hall Gibson, had begun growing organic vegetables on the grounds. “He offered me a lease. Fate dropped me here,” says Ryder, who launched her own flower and herb business while working shifts at a nearby emergency room. After Gibson retired 16 years ago, she took over the whole spread. 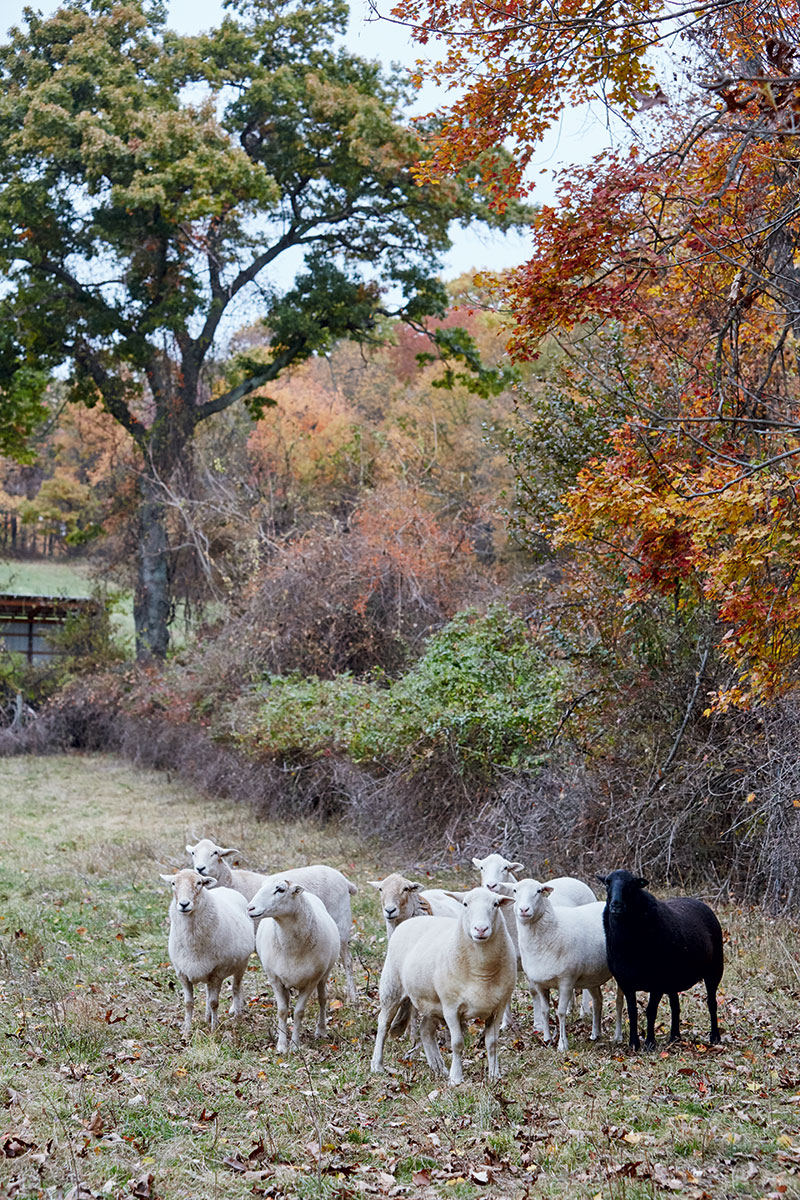 Doc, the black sheep, keeps company on the property with fellow Katahdins. 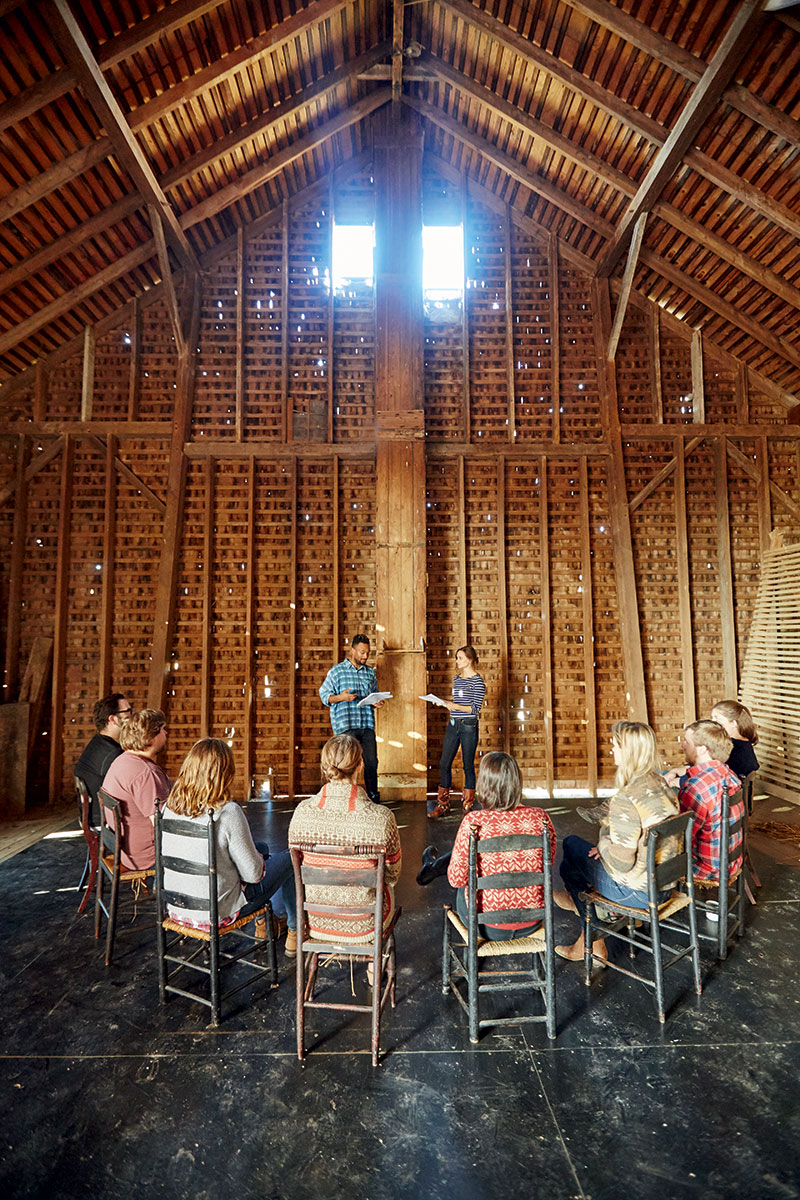 A converted barn serves as a performance stage for SPACE on Ryder Farm, the nonprofit artists’ retreat Simoness founded in 2011.

During the summer of 2010, Simoness and a dozen or so friends headed to Brewster every other weekend. They spent mornings spackling and painting, and afternoons writing plays and staging readings of one another’s work. “We were in our early and mid-20s and professionally trained,” says Simoness, who earned a BFA in acting from the University of North Carolina School of the Arts. “But we’d never had the space, mentally or physically, to investigate what kind of artists we wanted to be. It’s been a problem ever since there were artists and cities.”

A year later, Simoness made the loose arrangement official, founding an artists’ residency program that she named – what else? – SPACE on Ryder Farm. From June to October, the nonprofit hosts around 250 playwrights, actors, dancers, visual artists, musicians, and filmmakers, who live on the farm for one to five weeks and enjoy absolute creative freedom. Los Angeles”“based writer Joe Waechter has completed two plays and a TV pilot at SPACE. “In real life, I’ve got husband, bills to pay, commitments,” Waechter explains. “Here, I can carve out time to day- dream, canoe, chase chickens – or get chased by the rooster. This place lends itself to good, juicy writing by pushing away the self-editing part of your brain.”

The only thing Simoness asks of residents is that they come together for meals, overseen by actress and chef Rebecca Wolf and prepared with ingredients grown on-site. “You get to sit around the dinner table every night and have edifying, fulfilling conversations with such intelligent, thoughtful people,” says Chernus. “It’s interesting, this symbiosis between art and agriculture, how they feed each other.” 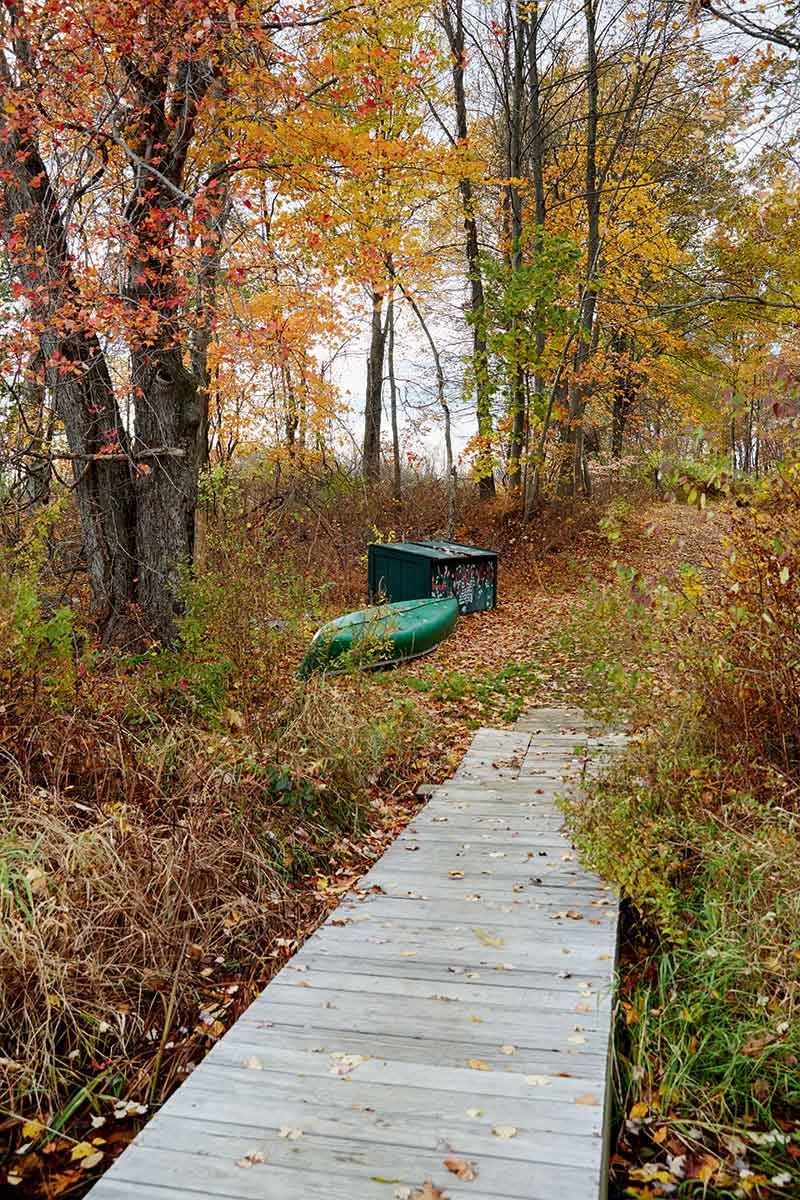 Residents can spend their days virtually anywhere on the farm. Two favorite spots: the dock at Peach Lake, on the 127-acre property’s edge, and (above) a quite nook overlooking the vegetable fields.

Last fall, Chernus and Simoness got married on the farm, where Betsey Ryder wed her husband, John, and Hall Gibson wed his wife, Kay. All three events have been duly recorded in the guestbooks – some dating to 1900 – that grace The Sycamores’ front parlor. Early entries detailing family reunions, birthday parties, and funerals have given way to heartfelt messages from artists expressing gratitude and a deep respect for the property.

“There’s an ebb and a flow, generationally, to any farm, which made Emily’s arrival all the sweeter,” says Ryder. “People always wondered what would happen when my husband and I go. I figured, we found our way to the farm, and somebody else would do the same. I’d always counted on that.” 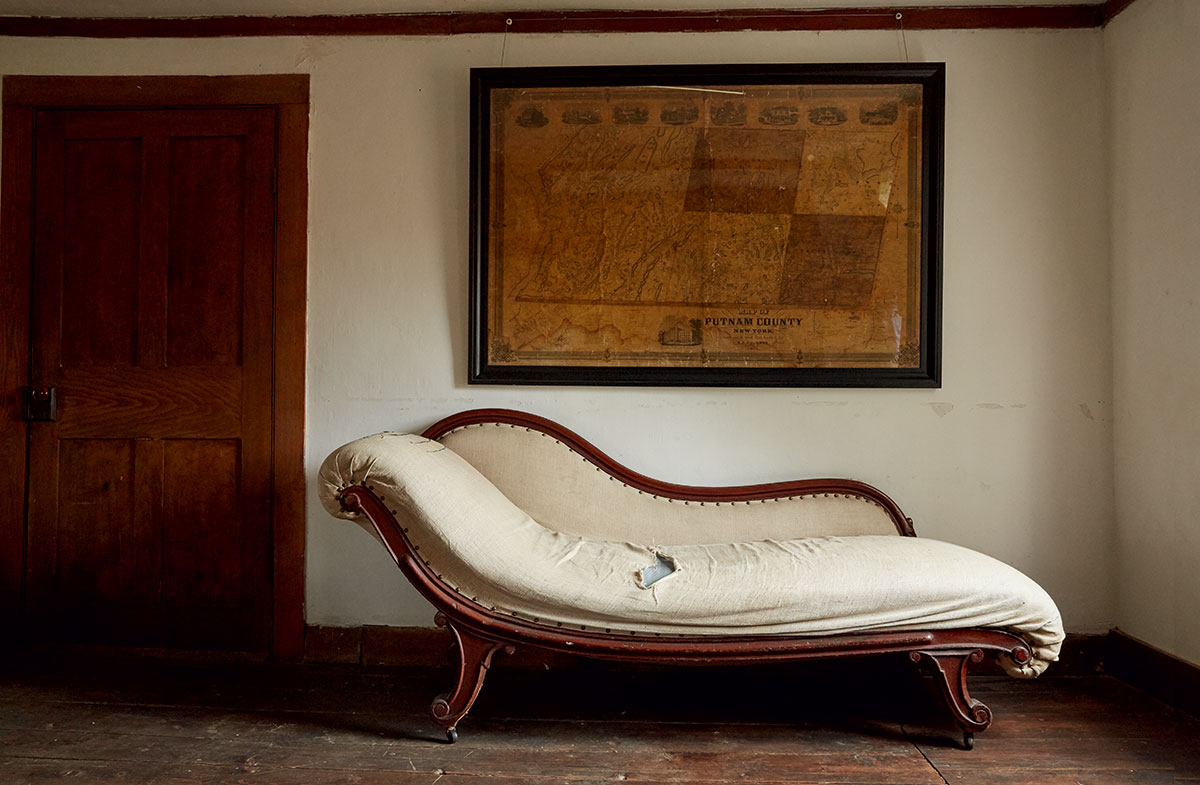 In the farmhouse parlor, a 19th-century fainting couch sits beneath a framed 1854 map of New York’s Putnam County. 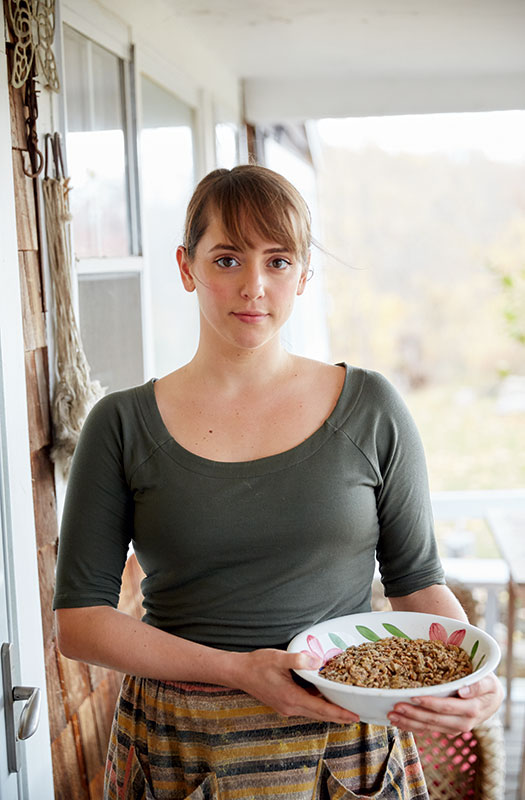 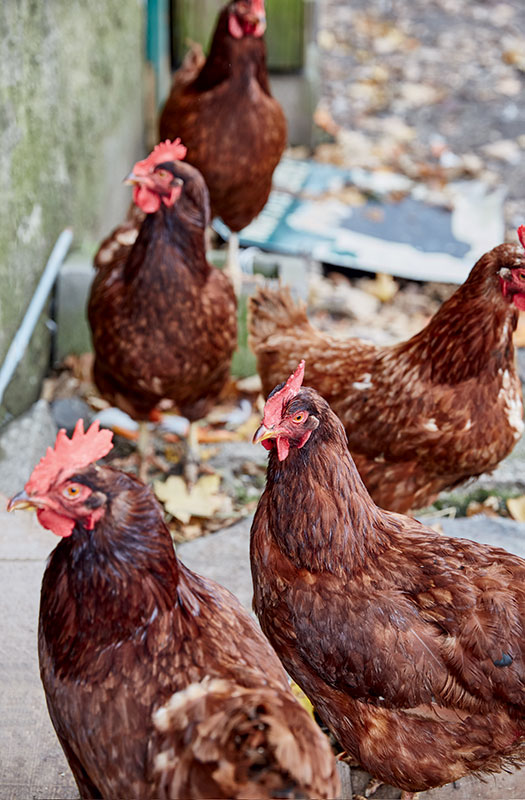 The family raises Rhode Island Reds for their eggs. 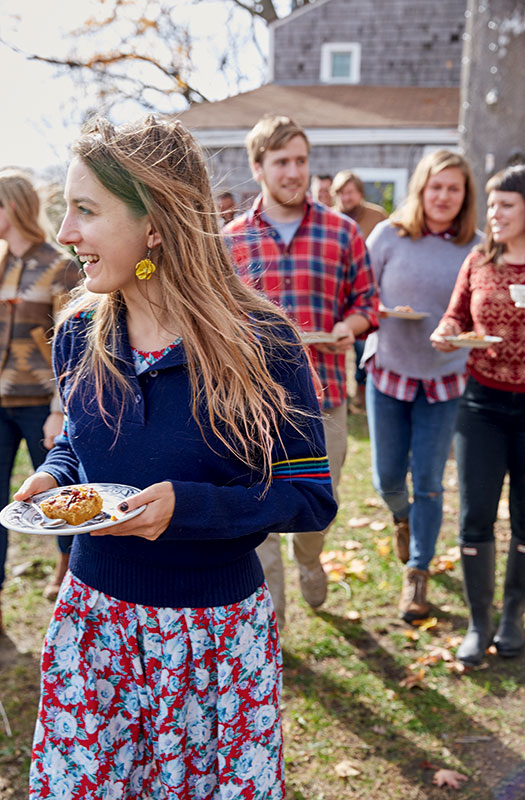 Playwright Clare Barron joins the crew for dessert by the firepit. 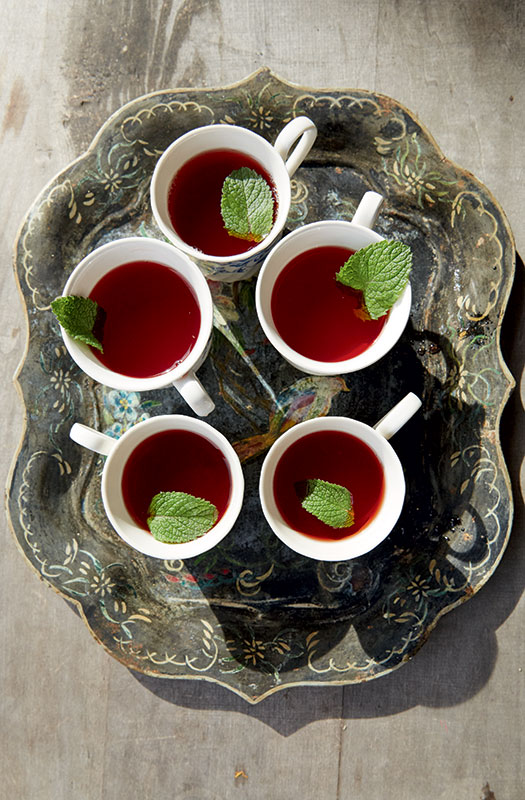 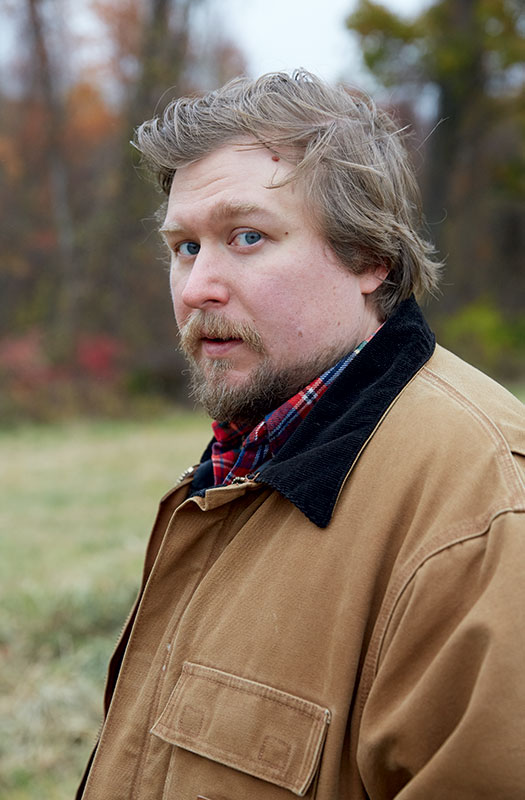 Chernus lives and works on Ryder Farm whenever he’s not shooting his new Amazon series, Patriot. 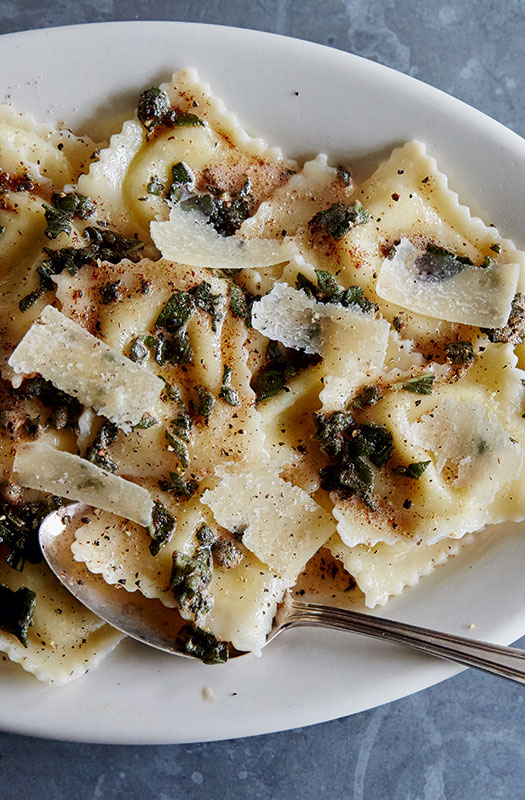 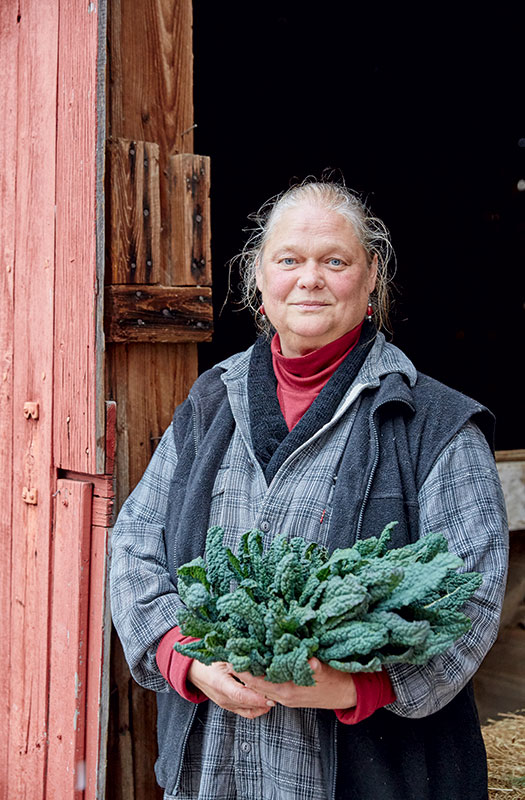 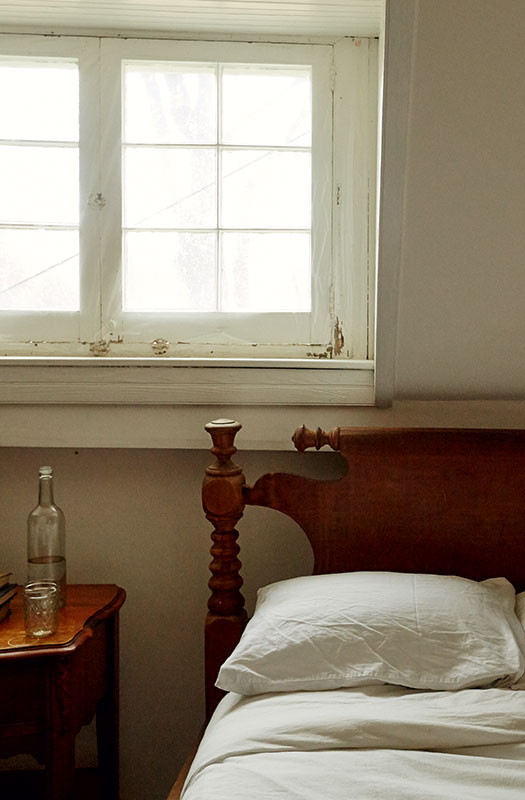 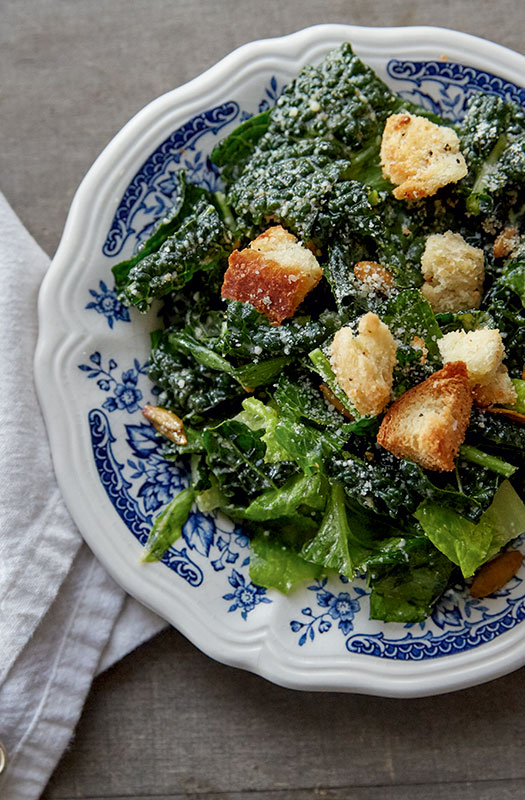 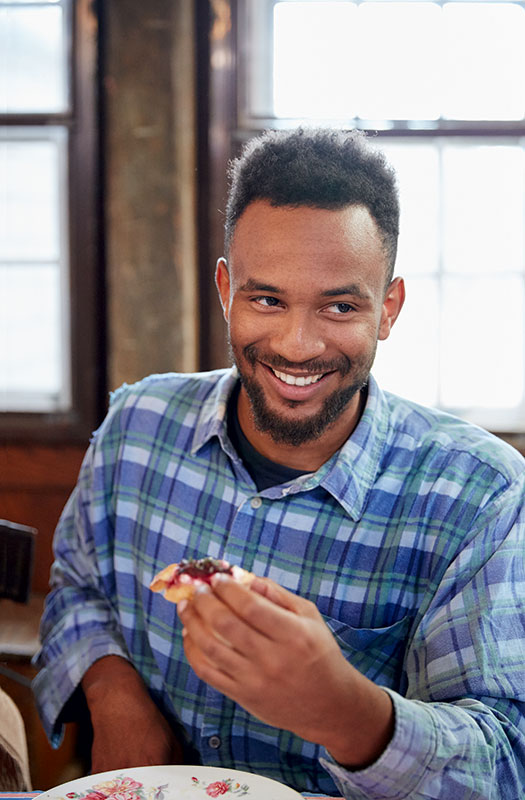 Lorenzo Roberts, who interned at SPACE in 2013, has returned every season since to work. 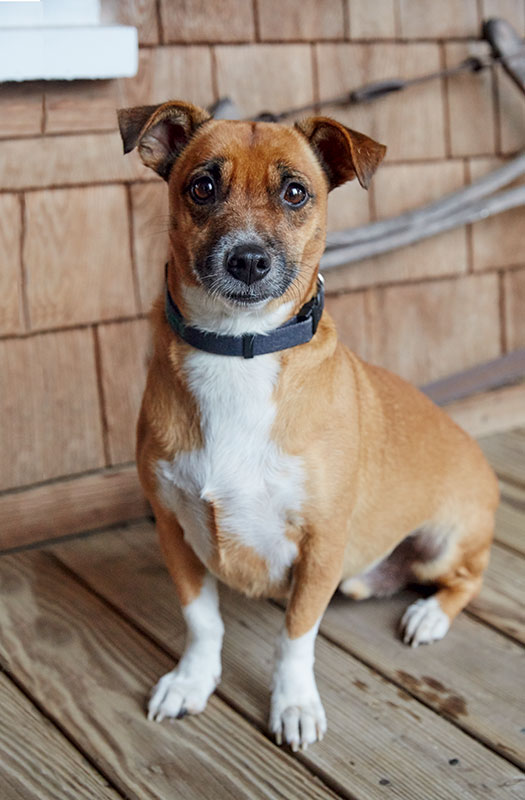