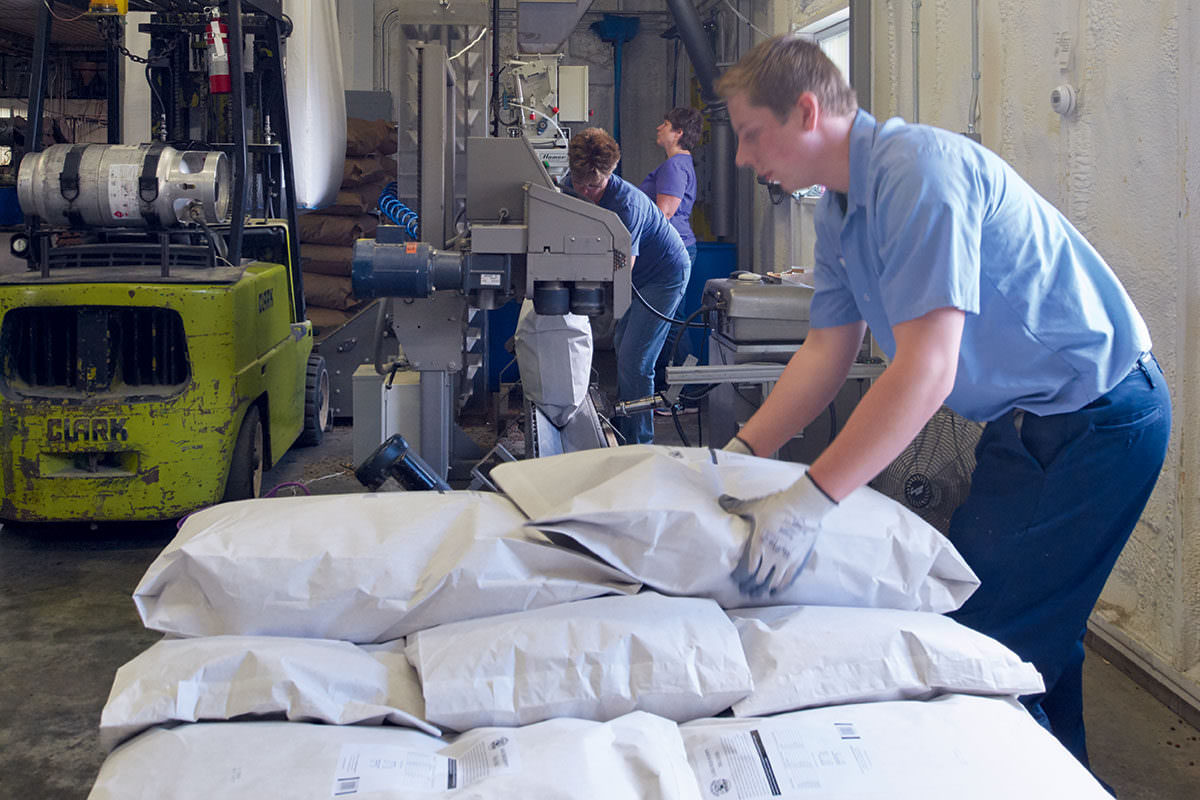 Mariscal and Vogel – then parents to a rescue dog named Tuula and a once-feral cat they called Blue – wholeheartedly believed in their employer’s raw-ingredient nutritional philosophy but took issue with the ingredients themselves. How could expensive, “all natural,” refrigerator-case entrées contain unspecified slaughterhouse by-products (meat meal) and cheap fillers like iceberg lettuce cores? “It was better than most of what’s sold in stores,” Mariscal recalls. “We just felt we could do much better.”

Launched in the kitchen of the couple’s San Francisco apartment, Smallbatch has since grown into a much bigger brand, with annual revenues that exceed $3 million. Gone are the days when Mariscal and Vogel delivered pints of raw dog and cat food via bicycle. More than 400 retailers – in California, Oregon, Washington, Utah, Texas, and Colorado – currently carry the line.

Smallbatch’s success shouldn’t come as a surprise, given that pet food sales in this country nearly doubled over the past 15 years, from $12.2 billion in 2000 to $23 billion in 2015. American households are now more likely to include a dog or cat than a child under the age of 18, and we tend to treat those animals like children – an obvious problem the moment you cast concerns about Mr. Wiggle’s diet against the dire issues of global hunger, overpopulation, and food security.

Anthropomorphizing our pets can also compromise their health, according to Sean Delaney, a veterinary nutritionist in Davis, California, who has worked as a consultant for dozens of pet food companies. The slaughterhouse slurry, or meat meal, that Mariscal and Vogel vehemently oppose? Delaney points out that dogs and cats are evolutionarily hardwired to consume the livestock leave-behinds that gross us out: feet, eyes, brains, etc. “These by-products are actually quite nutritious for an animal that once took down whole prey,” he explains. “The bloodless, deboned meat we get from the butcher shop doesn’t deliver the same vitamins, minerals, and electrolytes.” Not all meat meal, though, is created equal. And therein lies the rub. 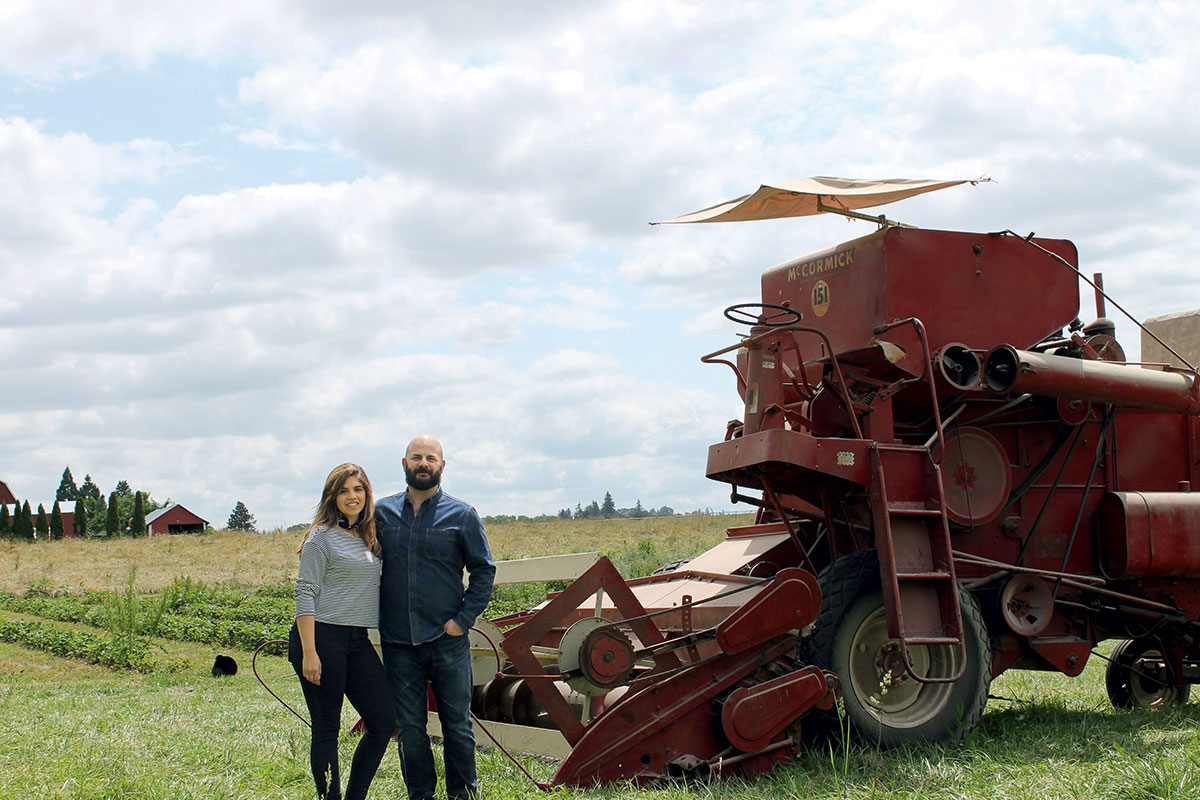 Diana Mariscal and David Vogel, Smallbatch, San Francisco, CA: The couple walked out on their jobs at a pet food company because they took issue with ingredients like meat meal and iceberg lettuce cores. “We felt we could do better,” says Mariscal.

In theory, the Food and Drug Administration regulates pet food. In practice, limited resources and the need to prioritize human safety have led the FDA to effectively cede federal oversight to the Association of American Feed Control Officials. A private organization with no regulatory authority, the AAFCO can’t enforce its voluntary guidelines, which emphasize nutritional requirements over sourcing. So while the association establishes such standards as minimum protein levels, it’s not strict regarding where that protein comes from. The end result: few national safeguards to prevent, or even discourage, the use of questionable meat meal.

And by “questionable,” we mean nightmarish. A YouTube video that’s been circulated over the years shows former AAFCO president Hersh Pendell acknowledging that pet food producers may purchase meat meal from rendering plants known to accept euthanized shelter animals. Other reports have disclosed the inclusion of roadkill, restaurant fryer grease, spoiled supermarket meat, and the remains of diseased zoo animals.

Although Delaney concedes “there are bad players in the industry,” he believes the horror stories have been greatly exaggerated. Nevertheless, it’s tough to be sure you aren’t serving your shelter mutt a less-fortunate shelter mutt. You can decrease the chances by examining listed ingredients. Specificity (“chicken meal” or “lamb meal,” as opposed to generic “meat meal”) suggests the absence of, say, cancerous zebra tissue but doesn’t guarantee it. A 2014 study at Southern California’s Chapman University analyzed 52 different pet foods and revealed that 16 of them contained meat from a species not listed; seven lacked one or more of the meat species listed; and one contained DNA from a species that could not be identified.

Of course, anyone who keeps up with the news knows that there are multiple pet food recalls every year. While the vast majority involve biological agents like salmonella and listeria, the presence of the industrial chemical melamine led to the 2007 recall of more than 5,300 different products – from upscale players like Natural Balance, Science Diet, Iams, Eukanuba, and Blue Buffalo. In that incident, 8,000-plus pet deaths were reported to the FDA.

Last December, Blue Buffalo settled a $32 million class-action lawsuit, following the discovery of chicken by-product meal (an ingredient the brand claims to avoid) in some of its products. Less widely covered: the fact that three multinational corporations own many of these seemingly independent operations. Nestlé, Mars, and J.M. Smucker control 93 percent of America’s mid-priced dog and cat food market.

For consumers skeptical of “Big Pet” and its howling-wolf and leaping-salmon imagery, a truly local start-up might seem the utmost safe haven. Not so fast, says Delaney. “Very, very small pet food companies make me more nervous than large ones, because they don’t have the same technical capabilities and are less likely to comply with basic AAFCO nutritional guidelines.” Plus, the artisanal emphasis on raw meat runs certain risks. “Dogs and cats are fairly resistant to food poisoning, but they can contaminate your environment,” he cautions. 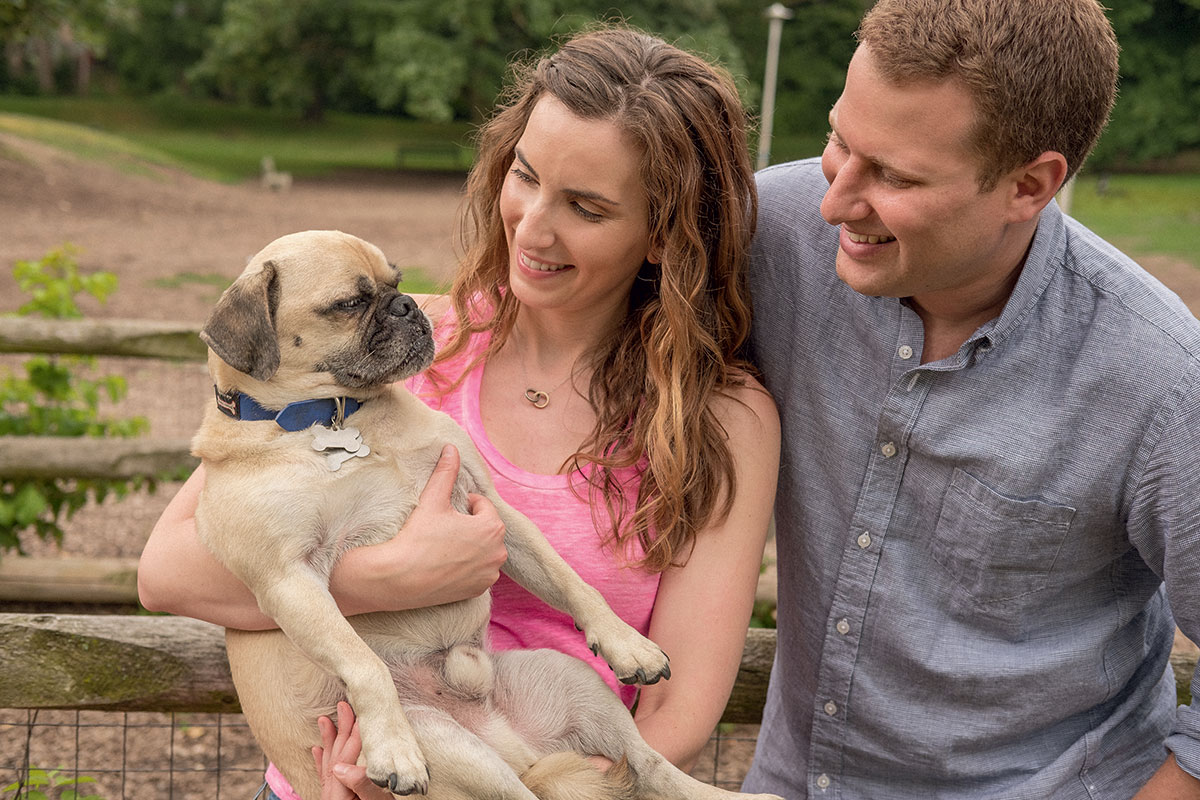 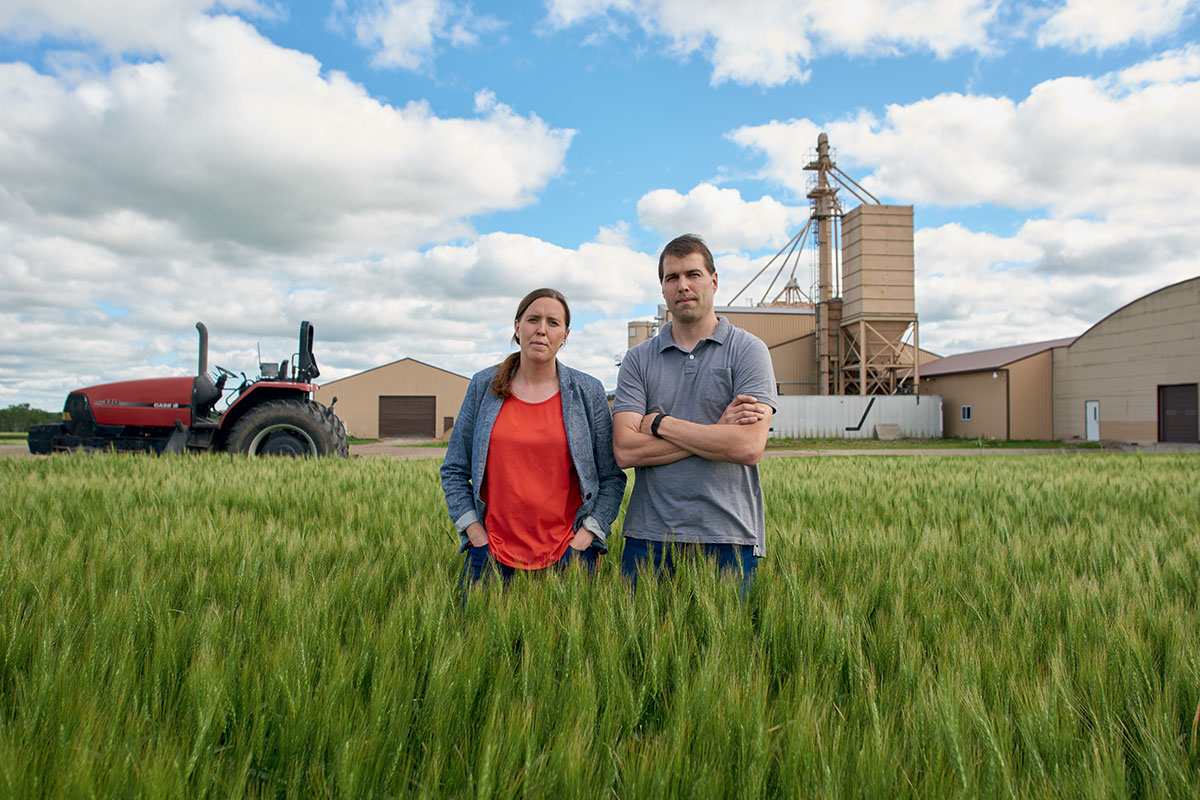 It’s enough to cause conscientious animal lovers, concerned about the health of their pets and the planet, to throw up their hands. Ultimately, the best one can hope for is transparency – a food movement buzzword that a two-year-old brand called Open Farm has staked its business on. The Toronto company’s website grants customers access to detailed descriptions of the ingredients in every bag of its kibble, coded by lot number. All of the meat hails from Certified Humane farms; the seafood adheres to both Ocean Wise and Seafood Watch standards.

Isaac Langleben, who started Open Farm with his wife, Jacqueline Prehogan, and brother-in-law, Derek Beigleman, says the team spent 18 months putting together a supply chain, literally knocking on farmhouse doors in search of willing, high-quality purveyors. The process, adds Beigleman, involved “a lot of long, lonely drives to places no one has ever heard of.” Lacking the funds or the know-how to set up their own factory, the entrepreneurs then had to locate a third-party manufacturer that aligned with their ethics. You can imagine how eager industrial co-packers were to accommodate the fledgling Canadian firm. 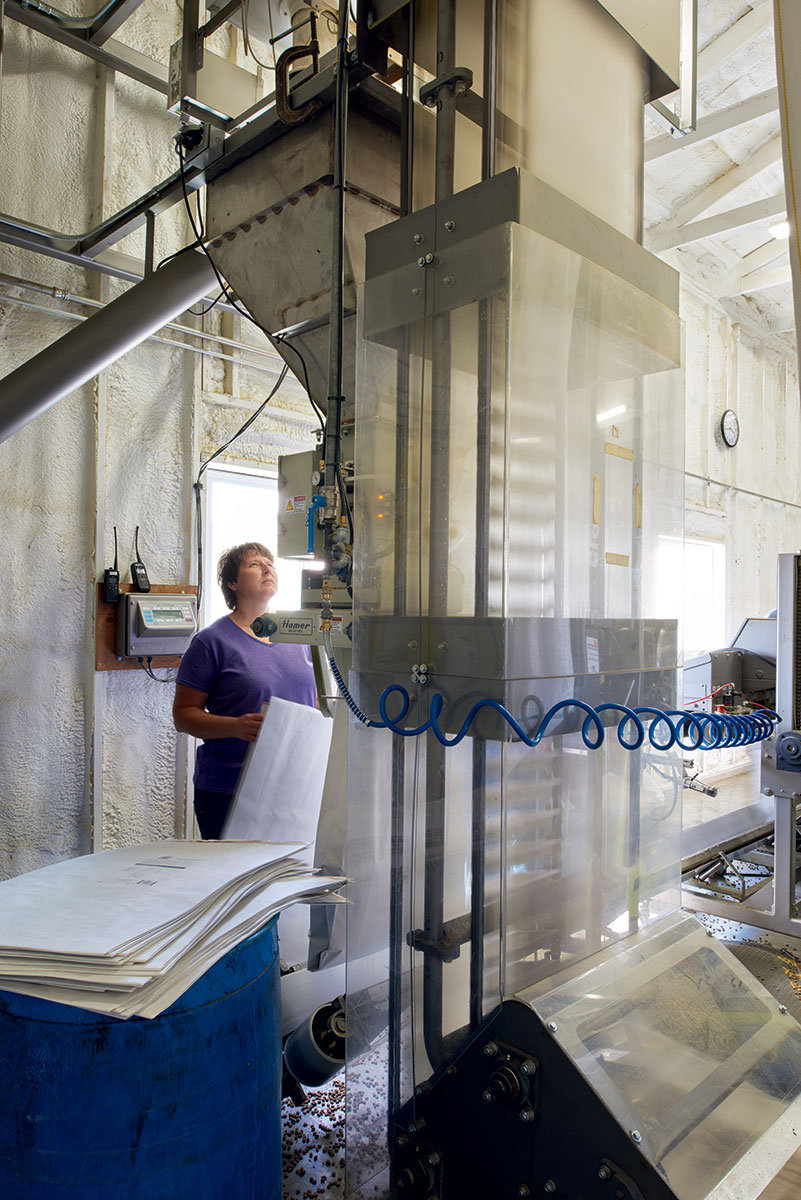 “Open Farm was trying to do a lot of things nobody had done before,” explains Tom Barrett, who runs Barrett Petfood Innovations with his sister, Sarah. The facility, which sits on their family’s 2,000-acre farm in Brainerd, Minnesota, doesn’t just manufacture Open Farm’s dog and cat foods; it also supplies the company with produce grown on-site. When Langleben, Prehogan, and Beigleman came calling, the Barrett siblings (already in the practice of sourcing meat from nearby ranchers) had no qualms about submitting to Certified Humane’s annual audits.

Certified Humane sets high slaughter standards, precludes the use of hormones and steroids, and forbids painful practices like debeaking chickens. The nonprofit does not, however, require access to pasture, except for ruminants, so pigs and poultry may never set foot outdoors.

Though Open Farm sought out the best of the Certified Humane producers, very few could meet the volume needed by the company, which sold a million pounds of dog food in its first year (Open Farm only recently began offering cat food).

That’s the trade-off: An absolute purist will never achieve the scale necessary to initiate widespread change. “We have three rescue dogs among us,” explains Langleben of Open Farm’s founders, “but our main motivation was the huge impact the pet food business has on our food system.”

Smallbatch, too, has long since outpaced the independent family farms that served as its original sources. Most ingredients remain certified organic, and all meat receives third-party verification of humane conditions, but the animals aren’t necessarily raised in picture-perfect pastoral settings.

“To be honest, it’s difficult, logistically,” says Diana Mariscal. “There aren’t enough resources to make the kind of product we really want to make.”

Still, she insists, “We have nothing to hide. If a customer calls and wants to know about our ingredients, we direct them right to the source.” Point being, her sources are farmers she actually knows.

Modern Farmer partnered with Dog Food Advisor to review the offerings of five different brands, representative of distinct market categories – mass market, premium “natural,” certified organic, certified humane, and raw ingredient. Dog Food Advisor provided expertise about nutritional makeup (ideally, high in protein, with meat or fish listed as the first ingredient) and the presence of unspecified slaughterhouse by-products (meat meal). Then we weighed in on agricultural and environmental concerns: sustainable sourcing practices in general, as well as exclusive use of ingredients that are certified organic and certified humane. 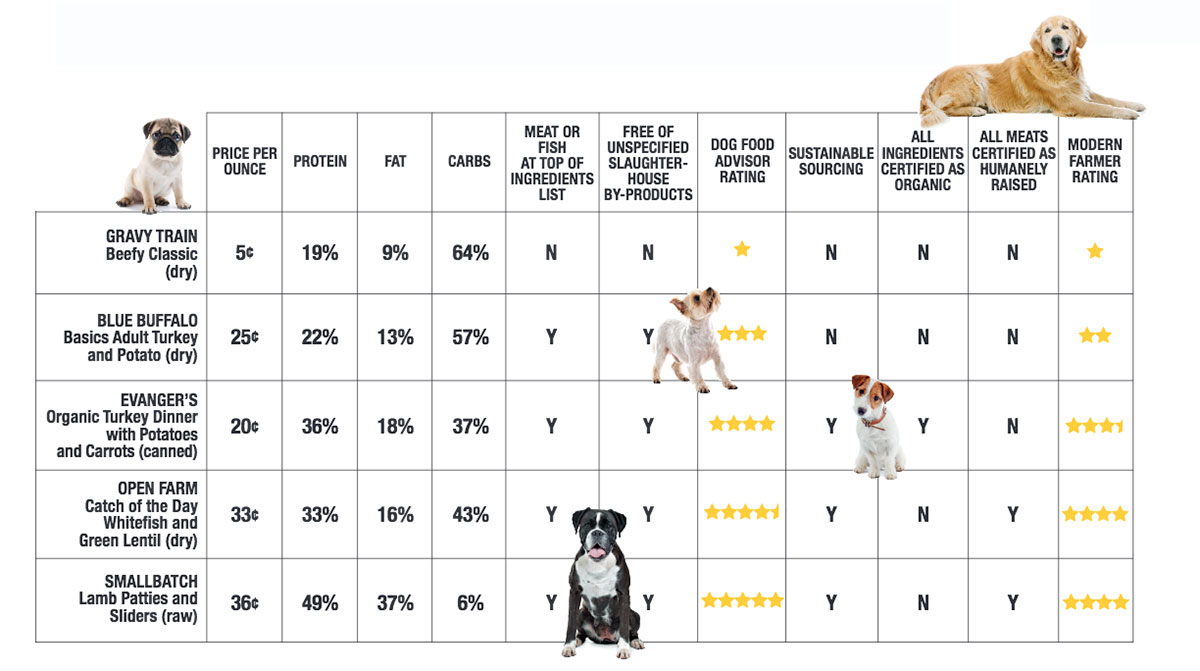 Does anything in your dog food come from China?

We have written Small Batch several times for information regarding analysis results for their food and treats. They have never responded which leads us to believe that they are LYING or Withholding important information about their products. We have also been on countless different sites touting Small Batch as a good product but none of whom did an actual nutritional analysis on ANY of the products that they sell. We were specifically looking for sodium levels for our dog who now has congenital heart failure and must be on a very low sodium diet. Until this company can provide REAL… Read more »

We have known a great deal about this pet food problem, but I will be posting more about it on FB to my fellow friends who love their pets as much as us.

We started making our food for a new puppy a few years ago, but we supplement with Open Farm as well.

Hopefully, just like Upton Sinclair’s book the Jungle, jump started the FDA, there will be better regulations for our furrry babies in the near future.

Where can I purchase this dog food

Hello, did you ever receive a response? I ask because I just started giving my dog this food (2weeks now) and curious as to if you have learned more?
Thank you,
JG

My Vet told me to switch off of Small Batch, because I should only use food that has been approved by a Nutritionist. Anyone have ideas on how to find out if a Nutritionist approves this brand! Thanks1