Why to Skip a #bisonselfie + 9 More Bison Facts

Some people think bison are cute. But they are definitely not cuddly. 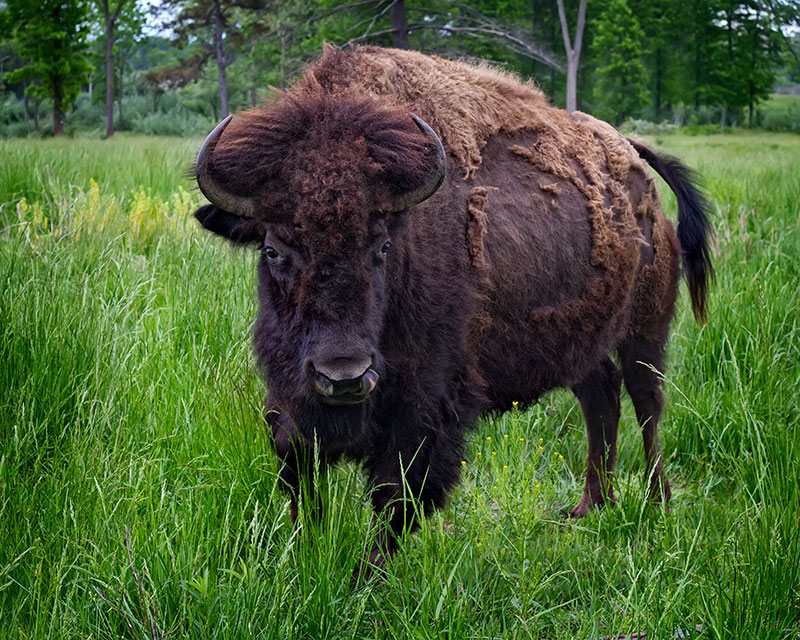 And you’re probably familiar with the fact that they used to roam the heartland in epic numbers – 50 million or so – until they were hunted nearly to extinction. But here’s a few more facts about bison that will blow you away.

1. They’re Not Just Big, but Nimble, Too

They can run up to 40 mph, jump six feet into the air from a standstill, and turn on a dime when threatened from behind, as if they were some sort of elephant-sized feline.

While it’s hard to tame an animal of such size and physical ability, ultimately it’s the bison’s temperament that has prevented farmers from domesticating it. Many have tried, only to resign to the bison’s “wild and ungovernable temper.” There is even a saying about it: “You can herd a buffalo anywhere he wants to go.”

3. But Not As Wild As They Used to Be

Of the 500,000 bison alive in North America today, only about 15,000 are considered truly wild – the rest are in managed herds living within fenced ranges, whether for conservation purposes or meat production. Over time, hybridization with cattle have made bison slightly less bison-like. Only 1.6 percent of the population, about 8,000 animals, is free of cattle genes at this point, over half of which live in Yellowstone National Park.

4. Yet They Are Still Dangerous

Bison have horns up to two feet long, which they will use to throw a person into the air, off a cliff, or gore them to death, as if they were swatting a fly. Death by trampling is another easy option available when a bison feels threatened. Remember: if their tail is sticking straight up in the air, it means they are likely preparing to charge.

5. So, Bison Selfies Are a Bad Idea

Thirty-three people were injured by bison in Yellowstone National Park between 1983 and 1985, which led to new rules regarding the public’s interaction with these unpredictable beasts. Since then, injuries have dropped to an average of less than one per year in the park – until 2015, that is. Last year five people were charged by bison in a three-month period, mostly while having their picture taken just a few feet from the animal. Don’t do this:

Ok I promise, one last selfie. #bisonselfie #wheresthebeef #bc #supernatural

In winter, a bison’s head must function as a snowplow to seek out food – that burly-looking bulge on the back of their neck is composed of enormous muscles to power it.

To survive outdoors in the winter, bison grow a thick coat, especially around their head. Their coat is so thick, in fact, that snow does not melt from their body heat, making them look like stoic ice monsters in the wintertime. Even in summer, males retain a thick mat of fur on their forehead as padding during the annual bouts of headbutting that occur as they vie for a mate. To that end, they also have special “bone struts” in their skull to prevent brain damage.

8. Did We Mention They’re Olympic-Caliber Swimmers?

Bison migrate vast distances as the seasons change, which means crossing big rivers. They are known to swim across rivers up to a mile wide, and navigate strong currents, even rapids, with ease. It helps that they are extremely buoyant, floating effortlessly with their head, hump, and rump above water.

Bison are herbivores and must eat 1.6 percent of their body mass in grass (dry weight) each day. That’s about 32 pounds of vegetation for a one-ton bull. A bison that size will also drink about 30 gallons of water each day.

10. Let’s Not Forget Their Impressive Ancestors

Bison latifrons, also known as the broad-headed paleo-bison, or simply as the giant Ice Age bison, was about 25 to 50 percent larger than the modern bison when it came across the Bering land bridge that connected Asia and what is now Alaska roughly a quarter million years ago – making it possibly the largest ruminant ever walk the earth. With horns measuring nine feet from tip to tip, you’d think twice before taking a selfie with this creature. 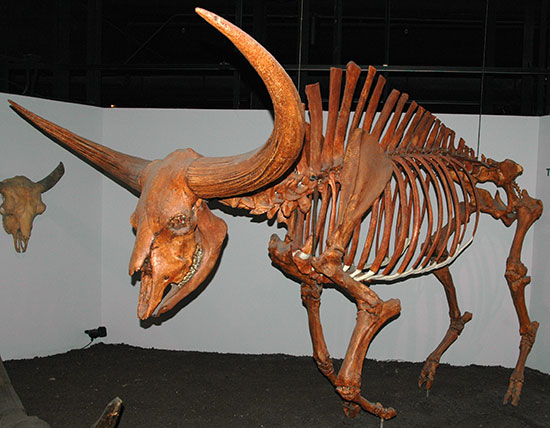