Bison: At Home, On the Range - Modern Farmer
Animals

Bison: At Home, On the Range

Recently declared our national mammal, bison are making a comeback - at grocery stores, restaurants, and, slowly but surely on America's wide-open plains. 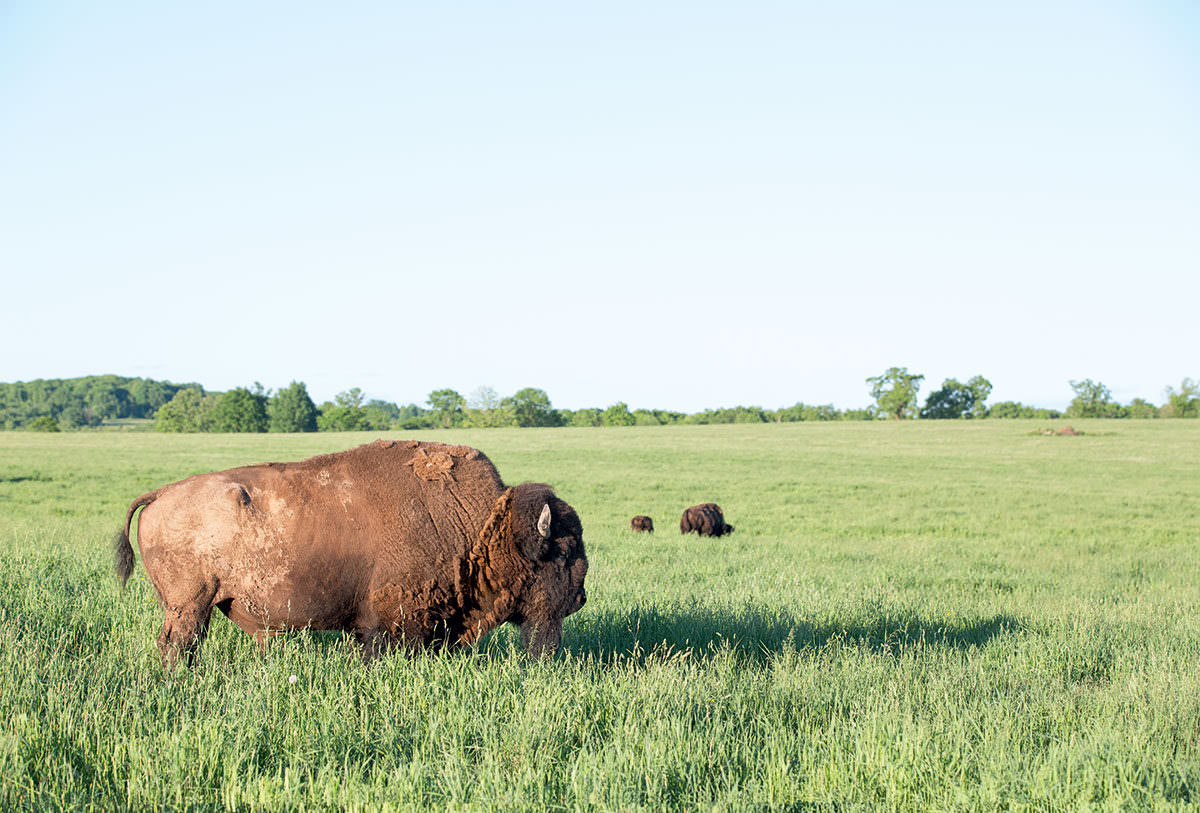 Husker, a member of NorthStar Bison's 700-head herd, grazes at the company's ranch in Rice Lake, WI. In this photograph, taken last spring, the bull has shed most of his winter coat in anticipation of warmer months ahead.
Share
Tweet
Pin
Email
2K Shares

In 1994, when Mary and Lee Graese bought their first two bison, beef was what’s for dinner, as Robert Mitchum’s voice intoned on the omnipresent television ads. We’re talking a few years before those Texas cattle ranchers sued Oprah over her mad cow”“related comments and nearly a decade before Ted Turner launched Ted’s Montana Grill – giving many Americans their first taste of bison, in chili, over nachos, and formed into lean burgers topped with jalapeños or blue cheese.

Yet Lee Graese humbly waves off any notion that he possessed uncannily prescient business savvy. “Initially, this was going to be a hobby,” he says of the dusky brown bull, Billy, and tawny heifer calf, Sarah, that he and his wife purchased from Minnesota’s Blue Mounds State Park as its rangers thinned the herd. “But we realized, after learning a bit more about the meat, that there was potentially a huge market for it.”

Two decades later, the price of bison meat – high in protein, low in fat and cholesterol, and, if grass-fed, rich in omega-3s – has tripled, from $1.50 to more than $4.50 a pound. In the past five years alone, restaurant and super-market sales have increased by $100 million. “We’ve not been able to grow fast enough,” says Lee, CEO of NorthStar Bison. The Graeses’ company currently comprises a 700-head herd, grazing on a dozen properties throughout northwest Wisconsin, including a ranch in Rice Lake, where the family lives, and in east-central Minnesota. The domain totals some 1,800 acres.

Lee and Mary’s daughter Marielle Hewitt and son, Sean Graese, oversee day-to-day ranch and business management, respectively. And the orders keep pouring in for their grass-fed and -finished plains bison (the only breed in America). “In the first few months of 2016,” says Lee, “we had requests for five times the amount of product that we could possibly pull together in an entire year.” 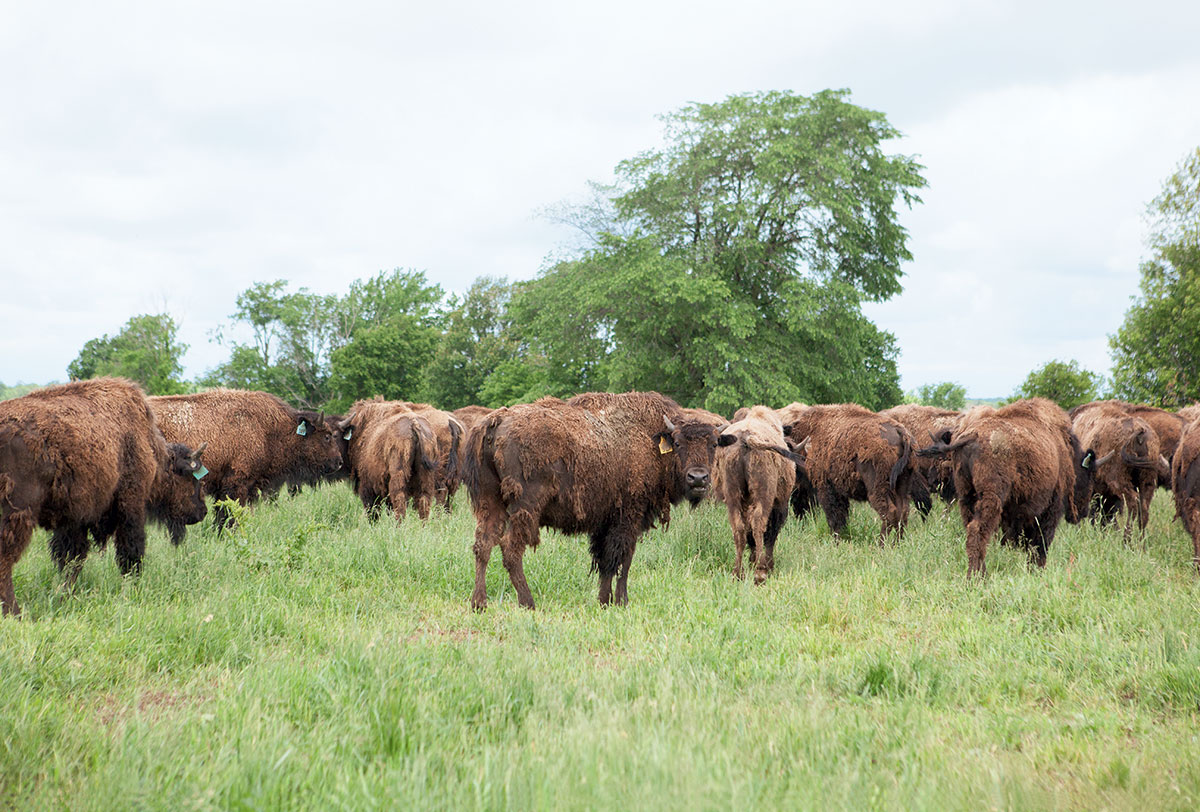 During the 1600s, bison were so prevalent in the territory that became Wisconsin that French explorer Pierre-Esprit Radisson reportedly called the region’s Eastern Dakota tribe “The Nation of Beef.” Historical accounts from the mid-1700s refer to bison crossing the Wisconsin River in such prodigious numbers that settlers had to sit and wait for the animals to clear before canoes could pass safely.

Then, in the 1870s, President Ulysses S. Grant and his advisers decided the best way to force Native Americans to assimilate would be to eliminate their food supply. The federal government paid hunters $80 a day (the equivalent of $1,400 now), and a single outing sometimes yielded 2,000 carcasses. The railroad’s western expansion also took a serious toll. By 1885, the number of bison in this country had shrunk from upwards of 30 million to less than 350. The latest stats put the United States total near 300,000 – much improved, but a far cry from our nation’s once-thriving population. 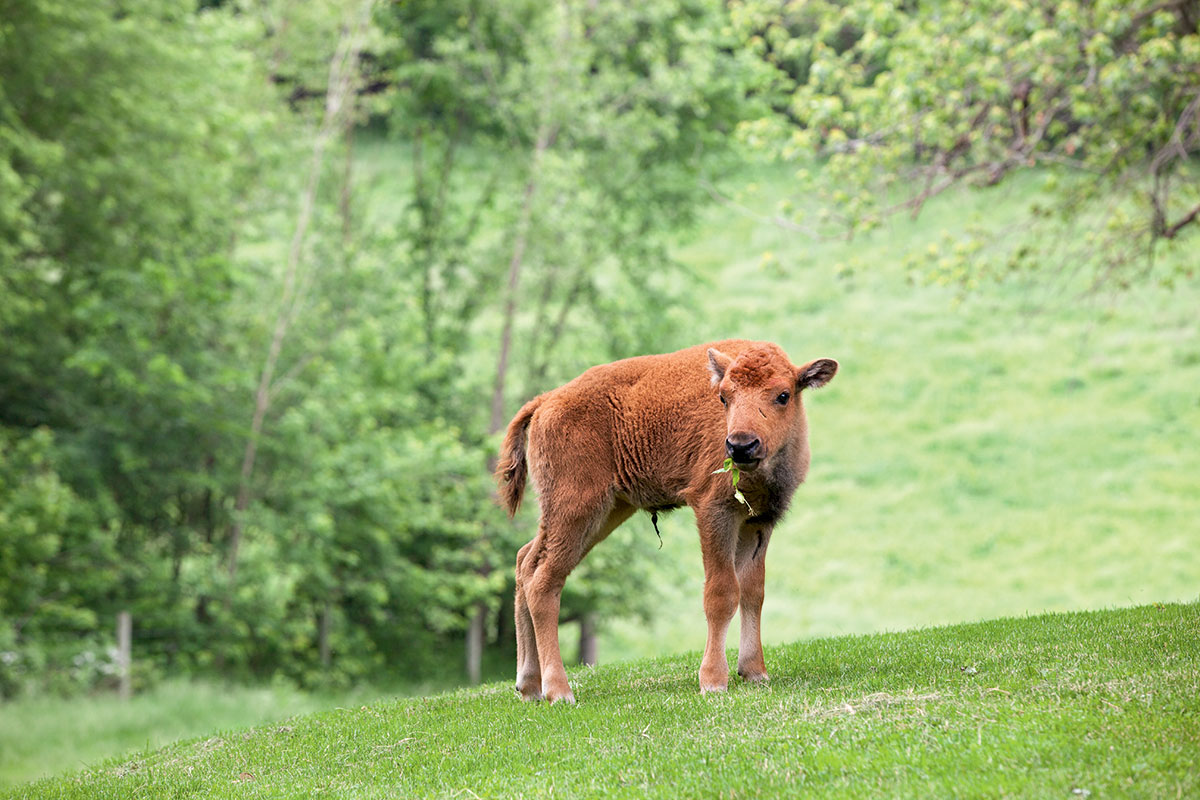 Rejected by her mother, this three-week-old calf, Beauty, had to be bottle-fed.

The Graeses have adopted a measured approach to expanding their herd. Due to the small pool of available bulls, in-breeding remains a long-term concern. Plus, bison don’t take to artificial insemination like cattle. “This is not an animal you can accelerate,” explains Marielle, 26. “And for us, it’s a marathon, not a sprint.”

Though the vast majority of bison farmed in America eat (or are at least finished on) grain, NorthStar’s subsist solely on grass. Such pasture-raised purity means the Graeses’ bison reach market weight 6 to 14 months later than their grain-fed brethren – an investment the company doesn’t recoup at the consumer level (see “Grass- vs. Grain-Fed,” below).

“Our philosophy is to work with nature, not against it,” says Sean, 29. “We let bison be bison.” Marielle reserves two acres of land per head, rotating the herd every few days. Beyond that, the animals require little intervention. Electrified fences discourage straying. There are no barns. NorthStar doesn’t brand, dehorn, inject growth hormones (per federal law), or administer antibiotics (against National Bison Association rules). Explains Marielle, “Bison do a very, very good job of taking care of themselves.”

The ranch also has no need for farm equipment, herbicides, or chemical fertilizers, instead relying on the animals to redistribute seed and fertilize the land. “We look at things from the ground down, not the ground up,” says Marielle. 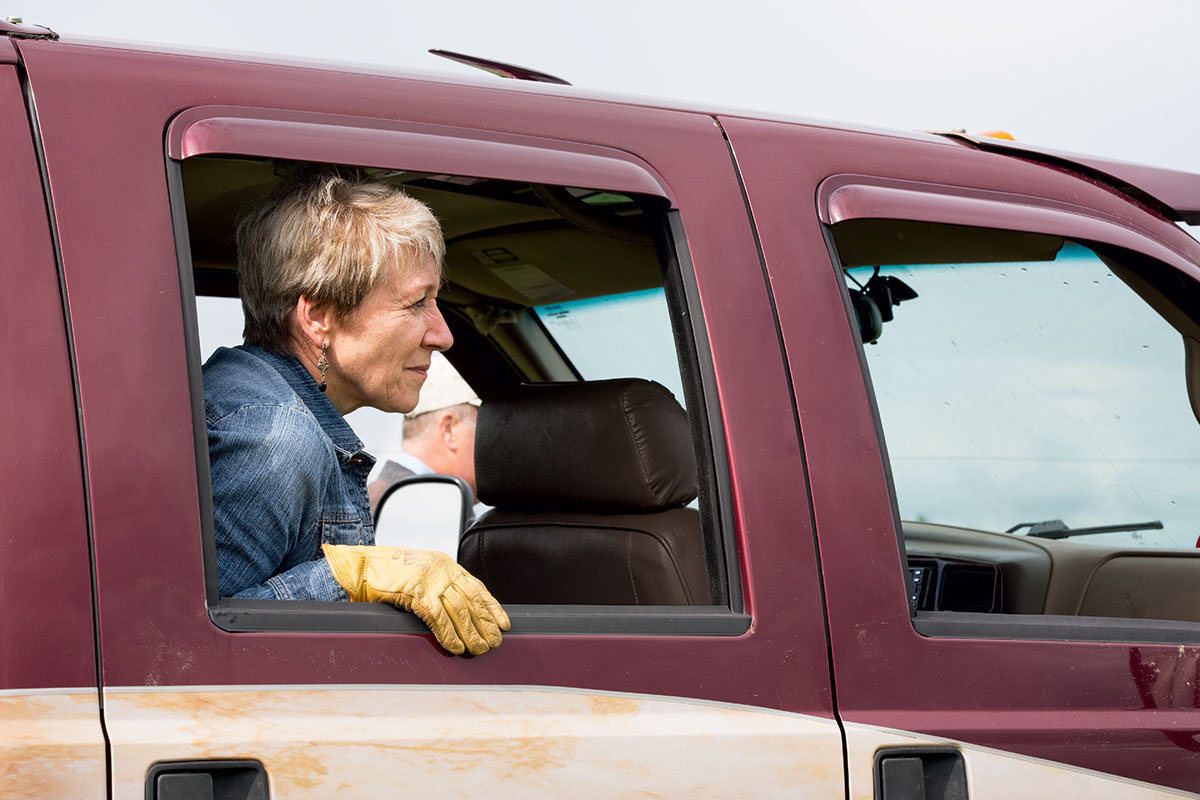 Mary Graese bought the ranch’s first two bison with her husband, Lee, in 1994.

It’s harder to romanticize the end game. But at least the Graeses avoid the typical conclusion, which involves trucking adult bison hundreds of miles to the nearest slaughterhouse, where they’re funneled into squeeze chutes to be killed. The stressful experience toughens the meat, most ranchers agree, because the adrenaline rush releases cortisol.

“Our entire goal for 30 months is to raise these animals humanely to make the best-tasting, most tender meat,” says Sean. “At the last moment, to throw them into a chute would violate everything we’ve done up to that point.” Instead, he and Lee conduct field kills in a paddock near the NorthStar processing plant (see “The Humane Harvest,” below). “I’ve not found many operations raising 100-percent grass-fed bison and doing field kills,” says Sean Lenihan, founder of the Honest Bison, a California retailer that sources meat from NorthStar. “The perception is the opposite. Most people think it’s all like this. You won’t see lots of pictures on the internet of the hundreds of thousands of bison that go through feedlots.” (In addition to wholesale clients like the Honest Bison, NorthStar sells direct to consumers via northstarbison.com.)

Lee happily shares his experience with regional dairymen and corn farmers considering a career switch. “That may not seem wise from a competitive standpoint,” says Sean, who’s poised to take over as CEO when his father retires in a few years. “But we don’t see things that way.” His dad agrees: “These animals cannot reproduce fast enough to keep up with demand. Even five or ten years out, we’re still going to be behind the curve on supply,” Lee explains. “Bison is a small industry. But the limit? The sky’s the limit. Or maybe the moon and the stars.” 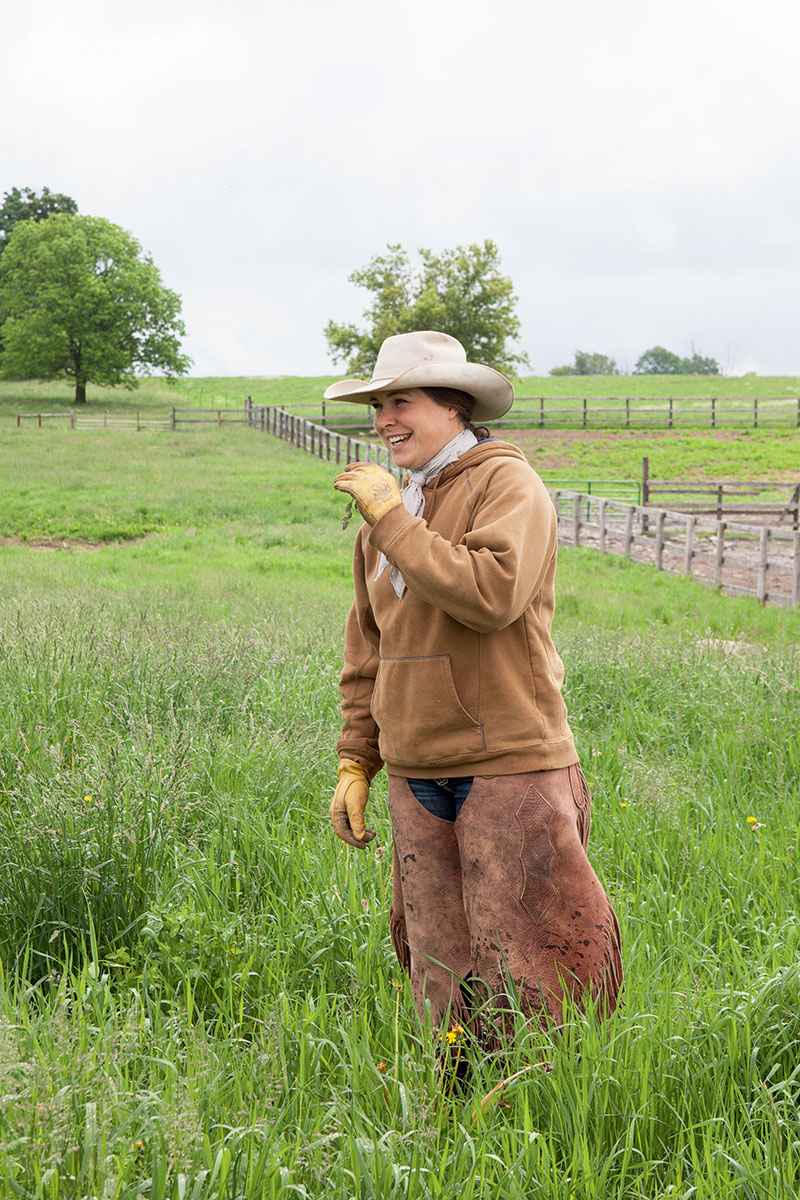 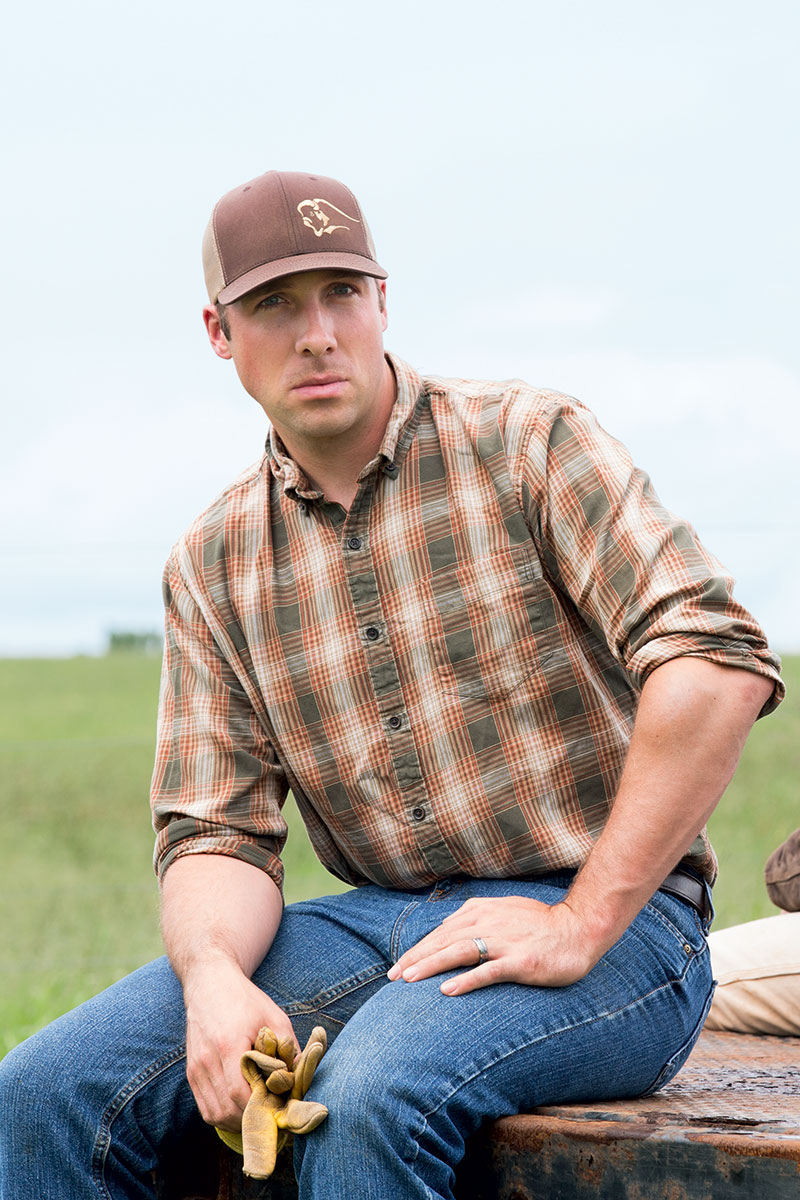 Sean Graese will take over as CEO of NorthStar Bison after his father retires in a few years. 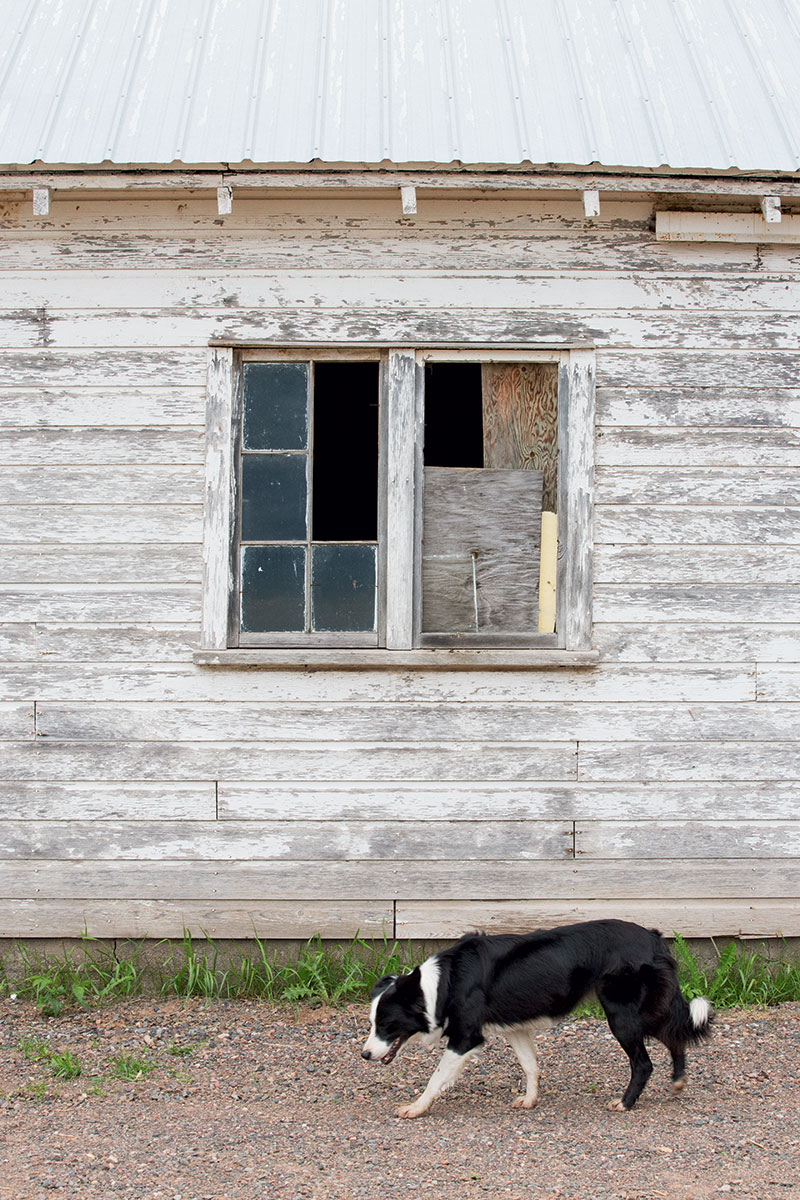 Border collie Stitch accompanies the beasts when it’s time to rotate to a new pasture. 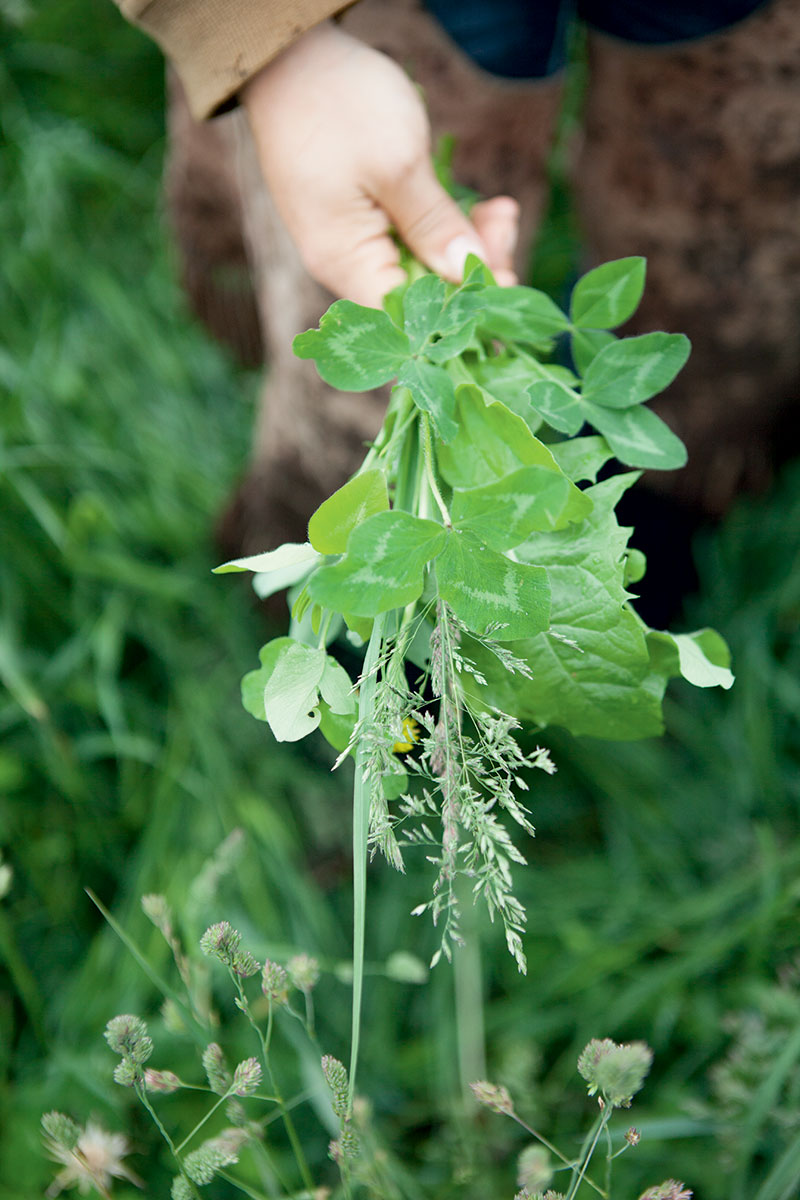 The ranch’s plains bison graze on Kentucky bluegrass, clover, dandelions, and other greens. 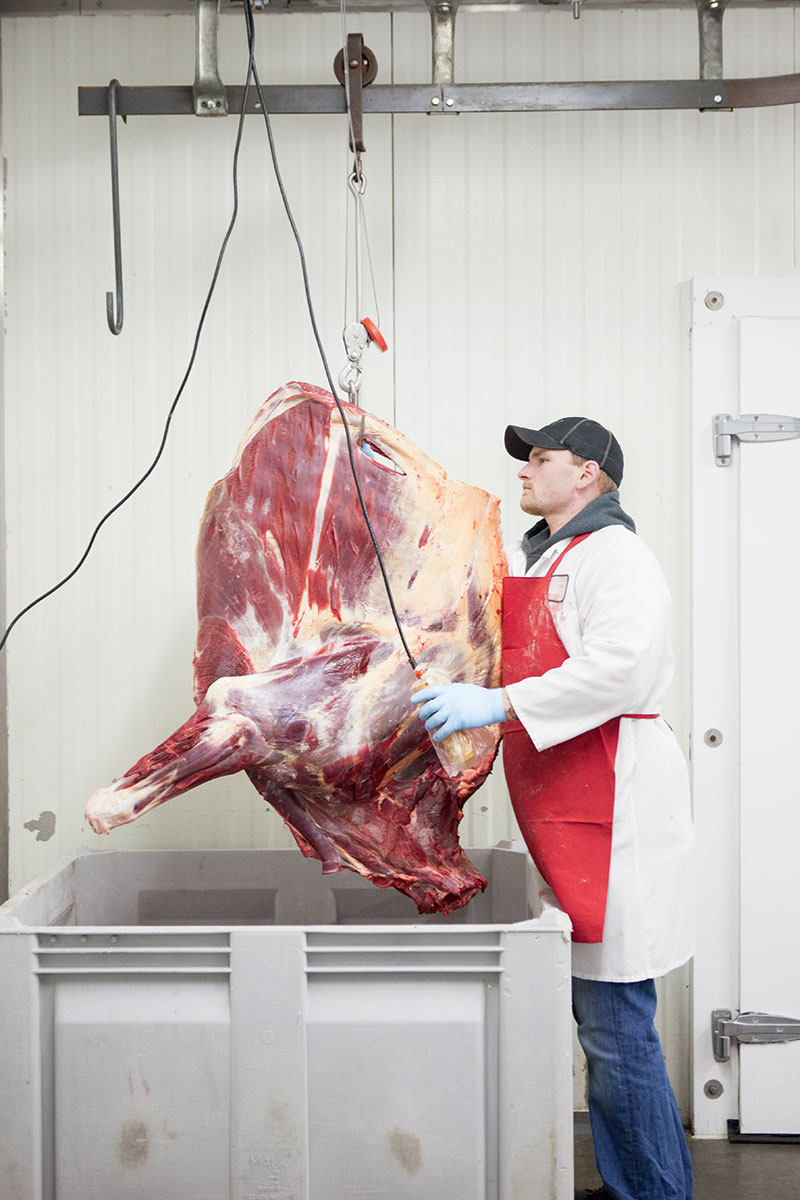 NorthStar operates its own processing plant, located on the Conrath, WI, ranch where the animals spend their final days. 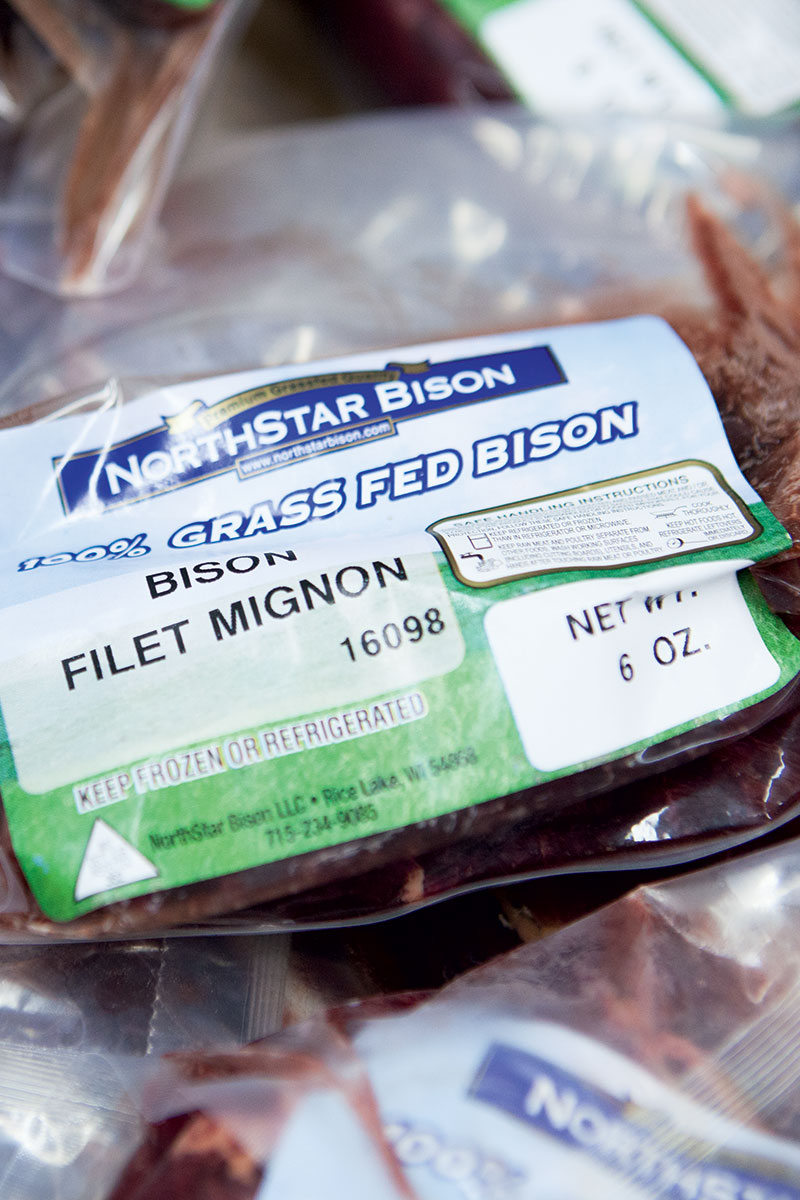 As with beef, bison’s highest-quality cut is filet mignon. This six-ounce portion retails for about $20. 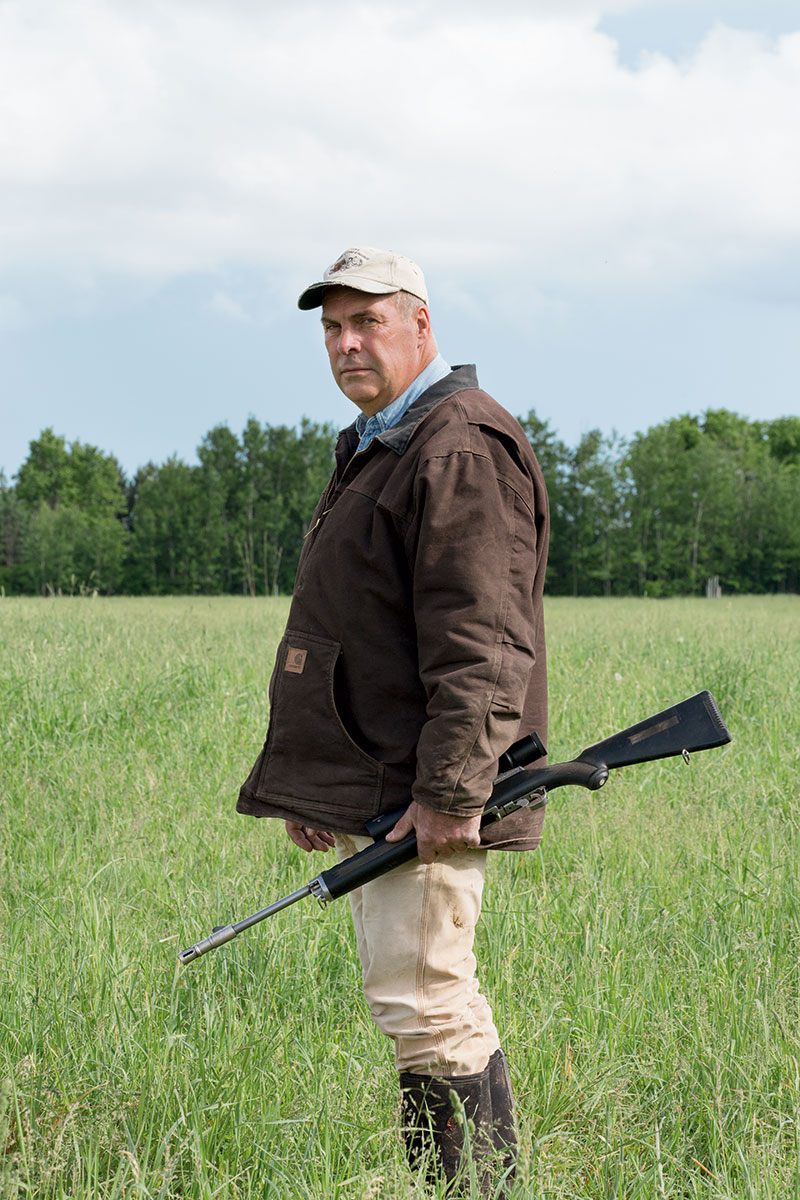 Lee Graese slaughters the bison himself, in the field with a deer rifle, under the watchful eye of a state inspector.

When bison reach market weight, most producers herd their animals into semis and drive long hauls to the nearest slaughterhouse. Lee Graese, however, relies on a deer rifle, shooting his bison right in the field. “What you’re aiming for is the brain stem, which is about the size of your thumb,” he says. “When you hit that, it’s lights out.”

This might sound a little Wild West, but animal behaviorist Temple Grandin praises the method as ideal. “Field kills are the lowest-stress way to do it, if you do it right,” she says. “You have to kill with one shot – otherwise, the bison are in pain – and you have to get the carcass to a plant promptly.”

NorthStar bison are slaughtered on the Wisconsin ranch next to the firm’s processing plant. An inspector with the Wisconsin Bureau of Meat Safety is always present, per state law. “It doesn’t turn into a rodeo or a stampede,” explains Lee. “The other bison just look around a bit and keep grazing.” 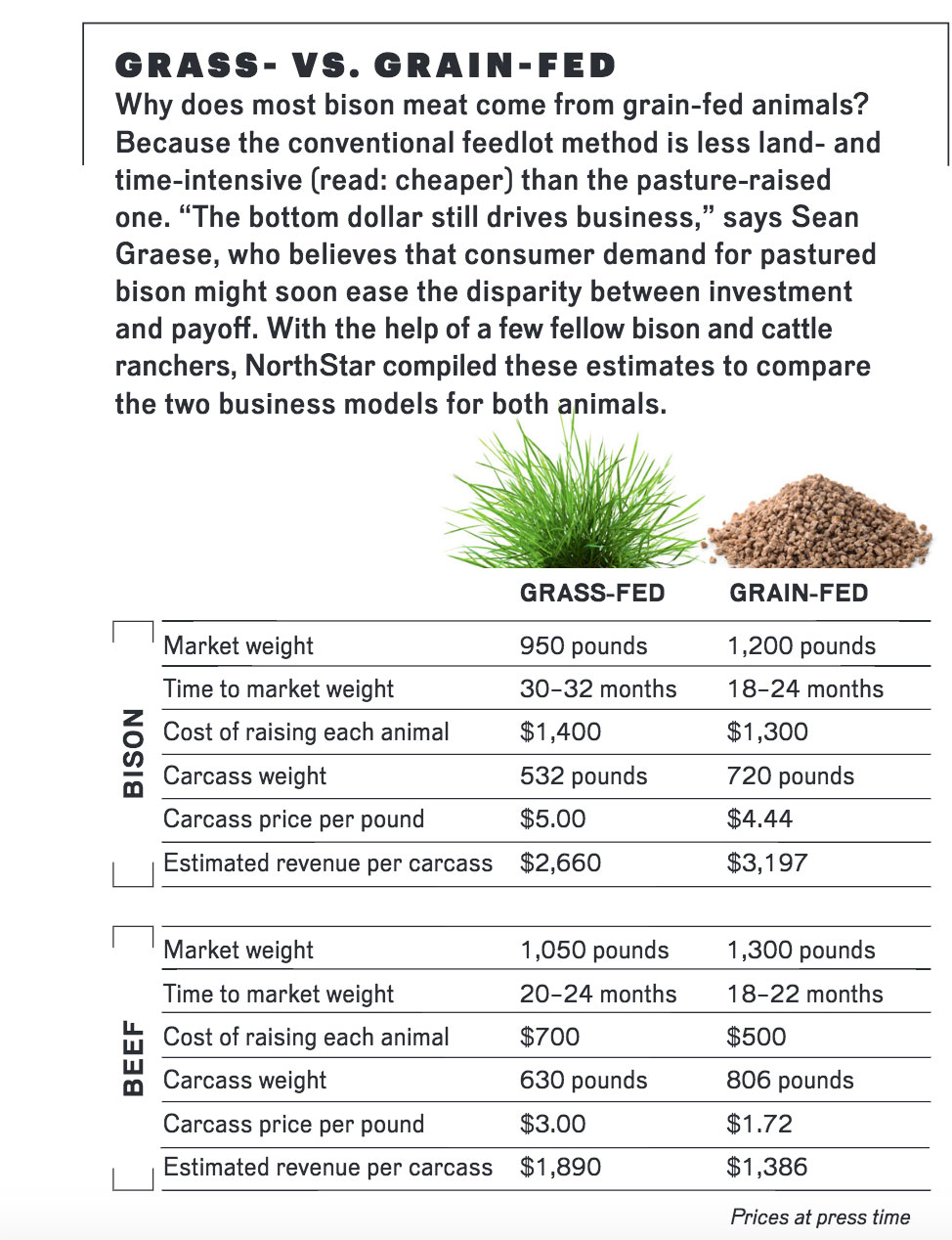