The true story of a man and his ocean-loving goats. 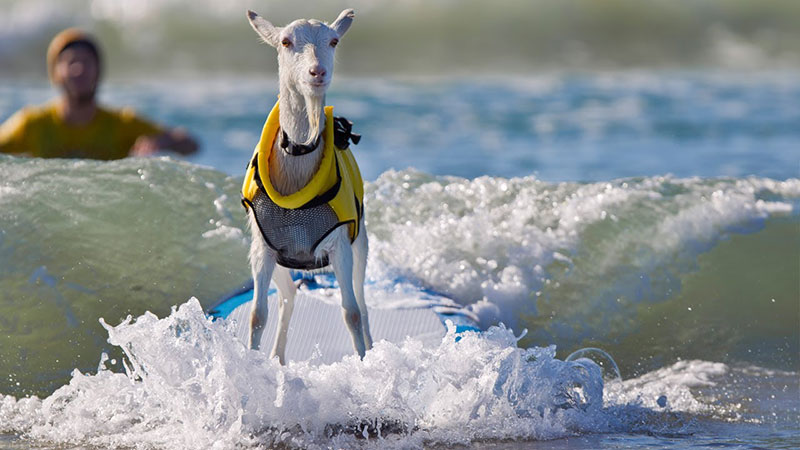 To get a goat to eat poison oak and blackberry brambles all day requires withholding more preferable foods. But like a doting father, McGregor constantly indulged Goatee with apples, carrots, and other treats. “She never did much cleanup,” he says. “And every time I left she would cry for me; I didn’t want to get my neighbors upset so I took her with me everywhere.” On most days, that meant hanging out at the beach.

McGregor and his goats live in the sleepy seaside town of Pismo Beach, California, about three hours north of Los Angeles. It’s a surfer’s paradise. But like many cities it had laws against keeping livestock in residential neighborhoods. Goats at the beach were also a no-no. Goatee, like any animal of her breed, nibbled on vegetation wherever she went, whether in a weedy lot or in city-maintained flowerbeds downtown, and left behind a trail of manure.

After receiving a few hefty fines, McGregor lobbied the Pismo Beach city council in 2014 to loosen up its anti-livestock laws. “I take [the goats] around town and people love seeing them,” he said in his testimony. “It brings them joy and a smile to their face.” The counselors were sympathetic, and thanks to McGregor’s efforts, residents can now apply for a permit to keep up to four goats at their home. And best of all, Goatee and her siblings are now able to play by the water without harassment from the police.

A long-time surfer, McGregor wondered if Goatee might enjoy catching waves as much as he did. But how do you teach a goat to surf, especially since they have a reputation of being afraid of water? (Anyone who’s raised goats know they scurry into the barn at the first sign of rain.) McGregor says they’re actually great swimmers; they paddle like a dog and stay afloat without a problem. And, he points out, they have a special talent that is essential to any surf star: good balance. Descended from animals that dwelled in rocky mountain crags, effortlessly scampering about on narrow ledges hundreds of feet above the ground, domesticated goats are as surefooted as an Olympic gymnast.

“I wouldn’t say they love water, by no means. I would say I got them pretty used to it at an early age,” McGregor says. “It just kind of happened naturally. I thought, oh man, that would be cool to take them out surfing, to share the joy with them of riding the waves. I didn’t give it too much thought, to be honest, I just went for it.”

Goats aren’t good paddlers, though, so McGregor stands on the back of the board and paddles out past the breakers. When a good-looking wave approaches, he paddles to get the board into position, and then he and the goat ride it together.

Goatee was a great surfer; tourists flocked to Pismo Beach to see her catch a wave. Then her son came along, who McGregor named after his hometown. Pismo got started surfing at an even younger age than his mother; McGregor got him used to the water when he was still a tiny nursing kid by occasionally bringing him in to a hot tub to let him swim around. So Pismo would learn to hold his breath underwater – an essential ability for a pro surfer, as you never know when a big wave is going to pin you under – McGregor dunked, him for just a second at first, and then longer and longer.

The training paid off: Pismo recently caught his biggest wave yet – a beautiful 9-foot steamroller – at the area’s local Junior Lifeguard Day, where the goats make an annual appearance to greet their adoring fans. You can check out in the video below, and you’ll notice that rather than ride the wave with McGregor, Pismo had other plans. “He head butted me off the board,” says McGregor. “He was able to stay on and he caught this incredible wave. It was mind blowing.” In honor of this world-record moment in the history of goat surfing, McGregor quips that the day’s been renamed National Goat Surfing Day.

McGregor has turned his surfing goat hobby into something of a career, with a website, viral YouTube channel (his “Goat” Busters and “Goat” Fit spoofs are hilarious), and more recently, a children’s book, The Surfing Goat, Goatee. He runs soccer camps, surfing camps, and outdoor adventure trips – all featuring his surfing goats. “I don’t know if I would call it a ‘career’,” says McGregor. “‘Career’ implies you have to make money at it, right?” A popular local DJ, McGregor DJs about 15 to 20 weddings per year “to survive.” But his surfing goat empire, however small, combines his three true passions.

“I love surfing, I love working with kids, and I fell in love with these goats. Soon I hope to start bringing them all over California to schools to share their story. Kids just come alive when they see them. The goats bring so much joy.”

So true I see these goats on 08/18/2019 and it helped me with my anxiety moment I was have good job in being lenient on the laws and letting this majestic creature be bye the beach.