The Louisiana Floods Have Had a Big Impact on Small Farmers 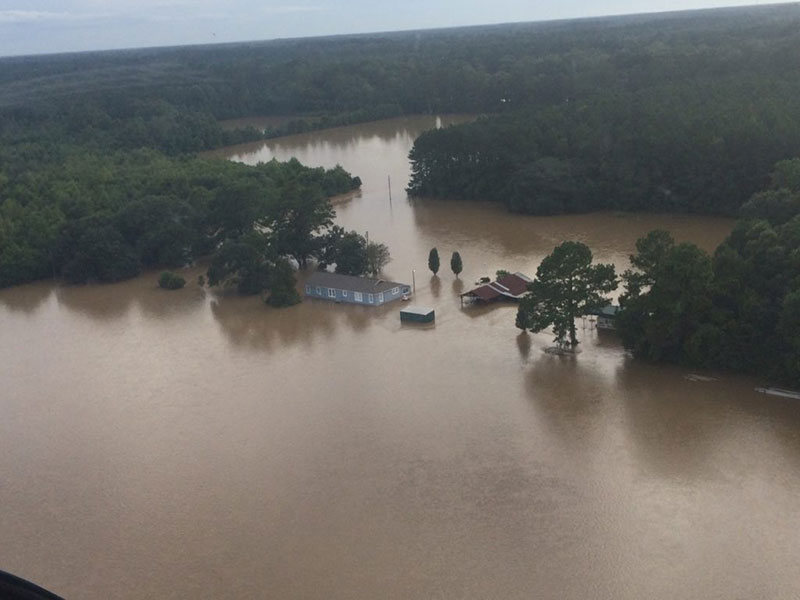 “We lost 99 percent of our crops,” says Brian Gotreaux of Gotreaux Family Farms, who raises fruit, vegetables, tilapia, and a medley of livestock on 30 acres just outside Lafayette. The water was thigh-deep over much of his land for more than 24 hours, long enough to drown any vegetable crop. Where a week before was a lush patchwork of tomatoes, peppers, beans, and zucchini – all the summer crops in the full glory of the harvest season – he now looks out on bare fields.

“It was unbelievable how much water came down out of the sky for hours at a time,” he says. “I thought surely the sky’s got to run out of water soon, but it didn’t, it just kept coming and coming.”

Gotreaux’s sheep, goats, and cows were driven onto the highest pasture, where they remained above the waterline. To protect his pastured poultry, Gotreaux says he and his wife stacked bales of straw under the rain-proof shade shelters that dot the fields where his chickens dwell. “The chickens weren’t going to walk a quarter mile [to dry ground], so we put our rain suits on and just kept piling up more bales the more it rained so the birds could get up on top of the straw above the water. It was like little islands for them in the pasture.”

Now that the waters have subsided, Gotreaux is sowing his fall crops – for the second time this year. He estimates the storm robbed him of two months of income. “Our financial model works on having 52 weeks a year to grow so it’s like there is air in the pipeline,” he says. “It’s kind of strange to be starting from scratch right now.”

According to a preliminary estimate from the LSU AgCenter, agricultural losses from this month’s flooding will total at least $110 million once everything is accounted for. Nearly half of that will be from the 420,000 acres of soybeans that were flooded just before reaching harvest stage. Much of the state’s rice crop had already been harvested, but about 72,000 acres were damaged by the flood, for an expected loss of around $33 million. Corn-producing areas are typically on higher ground in Louisiana, though damages may still reach $10 million. Sugarcane, another of the state’s commodity crops, suffered about $3 million in damages.

The USDA provides a host of disaster-relief services that are available to Louisiana farmers affected by the recent floods, including low interest loans, compensation for crop losses, and temporary access to the Supplemental Nutrition Assistance Program (SNAP), also known as food stamps. But Copper Alvarez, the executive director of BREADA (Big River Economic & Agricultural Development Alliance), a Baton Rouge-based nonprofit that supports local and regional food systems throughout the state, says USDA disaster-relief programs are generally geared for large scale producers, and tend to let small farmers fall through the cracks.

“The federal government is very good at working with the commodity crop farmers who have big one season crops, where if they get wiped out, they’re really wiped out,” says Alvarez. “But it turns out when our small farmers try to access those programs that it’s a very difficult process; there’s a lot of red tape and it takes a long time to actually get back any money. They’ll be out of business before they get assurance that they can get a federal loan.”

After hurricanes Katrina and Rita in 2005, BREADA established the Louisiana Small Farm Survival Fund to help fill the gap. More than $200,000 was raised for area farmers in 2005, and the fund has been a lifeline following flood events since then. Over the next month Alvarez says she hopes to distribute around $100,000 to 25 or 30 of the hardest hit farmers in the BREADA network. About $65,000 has been raised toward that goal so far, which will go toward replanting lost crops, repairing damaged equipment, and replacing supplies like fertilizer and irrigation tubing.

Alvarez says several farmers she’s visited in the last week lost all their topsoil to the torrential rivers running through their fields. “That’s something we’ve not experienced before. So they’ll be working just to rebuild their land.”

Eric Morrow, the owner of Morrow Farm in Ponchatoula, will be one of the recipients of BREADA’s relief fund. Located in Tangipahoa Parish, one of the hardest hit areas of the state, all 35 acres of Morrow Farm’s fruits and vegetables were under 3 feet of water for two days. Two tractors were submerged, along with several commercial-size refrigerated coolers and the farm’s irrigation pumps, all of which must be repaired or replaced. The power went out so all of his refrigerated produce spoiled, including 350 flats of just-picked blueberries.

“We’re going to have to go a couple months without hardly picking anything, and as any small farmer knows, when you stop harvesting, you stop making money,” says Morrow. He’s been in touch with the office of Louisiana’s Commissioner of Agriculture about how to access state and federal relief funds, but says that no firm answers have come through yet. “They said they know we’re out here. I said, ‘I appreciate you know that I’m here. But [the aid] shouldn’t just be for all the big boys growing sugarcane and rice; we’re farmers just the same, he says. Besides receiving government aid, most commodity crop farmers have crop insurance to cover losses in a natural disaster; Morrow Farm, like most small, diversified farms, does not.

“It was unbelievable how much water came down out of the sky for hours at a time. I thought surely the sky’s got to run out of water soon, but it didn’t, it just kept coming and coming.”

This is the second time in less than six months that Morrow has lost his crops to a flood. Flood stage on the nearby Tangipahoa River is considered 15 feet; on August 14, it crested at 27.33 feet, the highest it’s ever been. In March this year, the river reached 25.5 feet, spilling over its levee and washing away Morrow’s strawberry crop, his biggest income source for the year. He says the last time the Tangipahoa flooded was 1983. “This doesn’t really happen to us. It’s been a ride this year, I tell you.”

Climatologists say climate changeis already producing more frequent, and more catastrophic, storms across the planet. Louisianans can certainly attest to the theory: In 2005, Hurricane Katrina was followed by Hurricane Rita just a few weeks later; hurricanes Ike and Gustav hit in quick succession in 2008; then Hurricane Isaac devastated the Louisiana coast in 2012. And besides full-blown hurricanes, there has been a notable uptick in other major storms along the Gulf Coast since the late nineties. From 2000 until 2010 twelve tropical cyclones struck Louisiana, more than any other decade in 160 years of record-keeping history. That record is on track to be broken in this decade.

Brian Gotreaux says this is the sixth time in the last year that his farm has flooded. The only other time there was even a minor flood was 1993, the year he and his wife moved onto their property. “This isn’t a flood area, really,” he says, echoing Eric Morrow’s words. He’s hoping this month’s storm was the grand finale. It’s pushed him over the edge financially: he’s going to have to take advantage of the USDA’s offer of emergency SNAP benefits. “It’s funny that a farmer would have to go on food stamps,” he says, chuckling.

Not that it’s funny. And it’s not just farmers who suffer when their crop is lost. Louisiana grocers can ship in food from out of state, but with every storm, the local food system is weakened – a story not found in the headlines after a natural disaster. Says Alvarez: “One of the things we found with Katrina and Rita is that when the face of the disaster is a family without a home, it is very difficult to tell a story about the importance of keeping our local food system healthy and strong. But at some point we have to look beyond the immediate needs of a community following a disaster, and consider how agriculture is impacted.”