The Story of Brazil Nuts is Kind of Nuts

Brazil nuts, my friend, have quite a tale to tell. 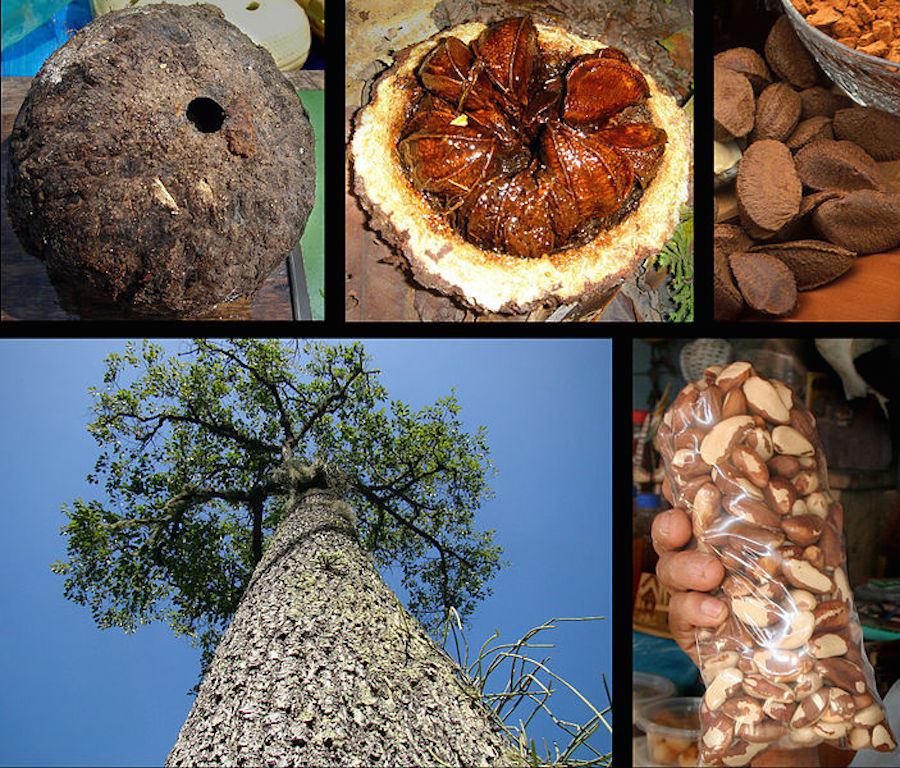 The Brazil nut come from the Bertholletia excelsa tree, which is found throughout the Amazon rain forest – an area covering about 2.7 million-square miles in South America, stretching across northwest Brazil and into Peru, Bolivia, Colombia, Venezuela, and Ecuador. The trees grow in lowland rain forests where flooding isn’t prevalent and can live for 500 years or more.

A nut, by definition, is a hard-shelled fruit with a single seed. But Brazil nuts don’t fit that at all; they’re actually considered seeds since they come in large pods about the size of a baseball in groups of 10 to 24. In fact, they’re more closely related to blueberries and persimmons than they are to walnuts or pecans. The pods are extremely tough – so much so, there are only two animals that can open them: us, though we need the help of an ax or machete; and a small rodent called an agouti, who gnaw the pods with their chisel-like teeth. Check it out:

In Brazil, these seeds are called “castanhas-do-ParÁ¡” or “chestnuts from ParÁ¡,” after a state in Northern Brazil where the trees grow abundantly. While there are some plantations, most of the production comes from harvesting the pods in the wild, which takes place from December to March. It’s a dangerous profession since each pod weigh up to five-and-a-half pounds and drop without warning from trees the height of an 18-story high-rise building. The pods hurtle toward the earth at 50 miles per hour with such force they can drive themselves deep into the ground. (We hope the harvesters wear helmets.)

Even the way in which the trees are pollinated is a bit odd. There’s only one insect for job, the orchid bee, which is big enough, strong enough, and has a long-enough tongue to pry the flower’s hood open and lap up the nectar within.

Brazil nuts have been eaten by the native people of the region at least since the Upper Paleolithic era, some 11,000 years ago. But the first mention of the Brazil nuts from Western sources goes back to 1569 during a time when Spanish and Portuguese explorers were tramping through South America, fighting, killing, and subjugating native peoples. One of these explorers, a Spanish conquistador named Juan Álvarez Maldonado, was introduced to Brazil nuts while exploring the Madre de Dios river region of Peru and promptly ordered that thousands be gathered for his hungry troops. That was pretty much the best thing that happened to Maldonado and his troops on that trip: their boats overturned navigating a swollen river, a bloody battle ensued with rival Spaniards who were also exploring the area, followed by another battle with natives that wiped out most of the rest of the crew. Maldonado barely made it back to civilization alive.

Not surprisingly, Brazil nuts didn’t really take off until the Spanish and Portuguese made better inroads into the jungles. But, strangely, it was Dutch traders who first introduced the food to Europe in the early 1600s, although it would take another hundred years or so before they became popular there. Brazil nuts first arrived in America in the early 1800s, and as in Europe, it took some time before they reached the kind of popularity that would land them in those ubiquitous tins of mixed nuts you find on your grocery store shelf. Today, nearly half the Brazil nuts imported to the United States come from Bolivia.

Can you buy brasil nuts still in the pods?

Cool and very interesting post though. I love those nuts!

Always wondered where brazil nuts originated from and how it grows.

Please, brazilian nuts have been in America for thousands of years not introduced in 1800. Brazil is in America too, and also Peru, and Bolivia, etc… Let’s not fall for America=USA please!