The Latest Crop in the Local Food Movement? Wheat

The concept of "terroir," once exclusive to the elite world of wine, is now crossing over to the humblest of crops: wheat. 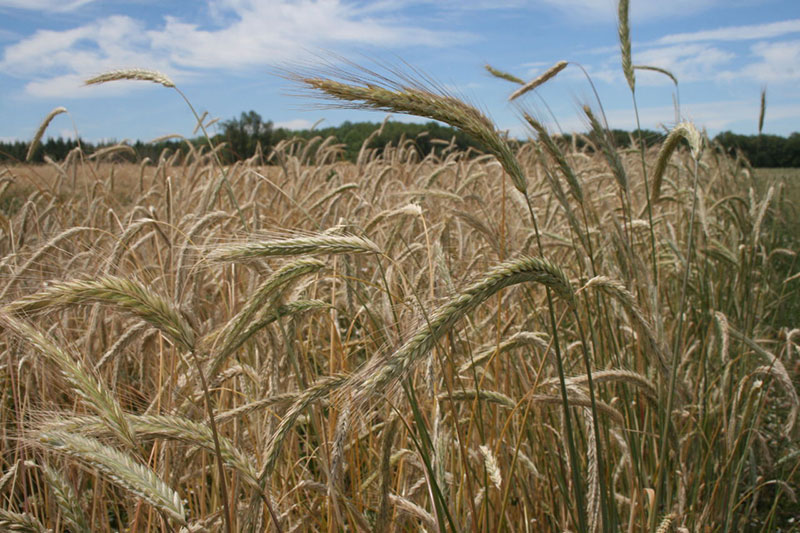 But that’s all about to change. Wheat is experiencing a renaissance as chefs, food writers, and savvy consumers discover that each kernel holds a universe of long-forgotten flavors, a terroir: Wheat from one area tastes different from the wheat in another, and each varietal has a different flavor profile from the one down the road.

And when wheat is no longer treated as a high-volume/low-price commodity, small farmers can start commanding top dollar for unique grain grown in a unique way on their unique land.

Oakland, California-based pasta company Community Grains is now leading the race to bring terroir-labeled wheat products to the general retail market. A few years ago, the company experimented with a new label for a few of its pasta varieties, specifying not only the exact varietal of wheat in its fettuccine or torchiette, but exactly where it was grown – even naming the specific farm – along with the date it was harvested. The experiment got such positive feedback from customers that as of this month Community Grains is now converting its entire product line to the concept – moving forward they won’t sell any products with anonymous wheat.

“The key to good food is to de-commoditize it,” says Community Grains founder Bob Klein. “That’s why we only buy directly from two CSA farms here in California’s Capay Valley, in Yolo County. They were growing small amounts of this wonderful wheat, and people were going crazy for it, so we requested more. Now there’s a symbiotic relationship directly between the farmer and the food producer.”

But is it really possible to tell the difference between heirloom wheat hand-tended in small plots and nameless factory wheat? When you come right down to it, it’s all just … wheat, a flavor that’s always in the background, never the star. In fact, in blind taste tests, even top wine experts can’t tell different wines apart. Aren’t wheat terroirs just as indistinguishable?

No, says Dr. Stephen Jones at the Washington State University Bread Lab. As a leading expert in wheat genetics, he’s proven that different wheat strains and growing conditions do produce unique flavor profiles. “We do taste tests all the time in our lab with bakers, chefs, students, and even random visitors. People notice big differences in wheat flavor based on where it’s grown – especially when it’s fresh-milled 100-percent whole wheat. That’s where the flavors are.”

Although wine connoisseurs have developed an entire vocabulary to describe the subtle aromas hidden in a glass of Zinfandel or Chardonnay, the specialty wheat dialect is still in its infancy. “Sadly, we don’t yet have terms for all the different flavors in wheat,” says Klein. “But we’re working on it.” Taste-testers at the Bread Lab have volunteered such expressions as “nutty,” “earthy,” “bright,” “chewy,” “warm,” and “gratifying.” It’s a start. 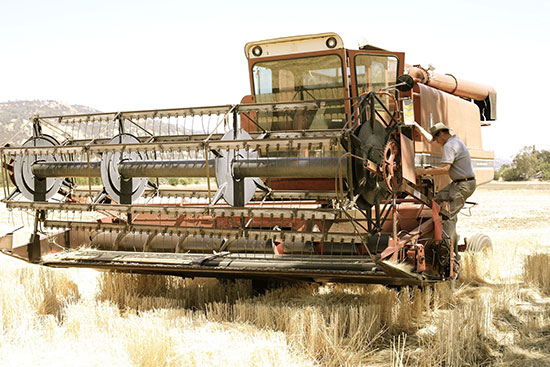 A farmer at Full Belly Farm climbs aboard the combine. Courtesy Paul Muller

Modern American farmers did not invent the notion that specific varietals of wheat from various geographic regions have different flavors; you can trace the concept back to Italy centuries ago, where each Italian region championed the quality, texture, and taste of their own wheat pasta over all others. The recent rise of major nationally distributed pasta brands eroded the regionalism, but now Italian pasta terroir is making a comeback, too. Companies like Rustichella d’Abruzzo have begun to release pastas made exactly as they were in the 19th century, such as their “PrimoGrano” line which exclusively uses hyper-localized ancient wheat strains only discovered in the hills of the Abruzzo region; a handful of acres are harvested and processed using traditional methods to make a single batch of pasta once per year, released to connoisseurs like the rarest of wines.

Just as there is no “best” type of grape, there is no single all-purpose heritage wheat “better” than the others. Small farmers are re-discovering that ancient wheat strains, known as “landraces,” each excel in different culinary contexts: Red Fife, originally from prehistoric Anatolia but perfected in Canada, is unbeatable for bread flour, for example; Sonora Wheat, the first wheat brought to the Americas by Spanish conquistadors, makes the perfect tortilla; Mesopotamian Durum, the grand-daddy of them all, dating back 9,000 years, is the basis for impeccable pasta.

“I’ve grown up around wheat all my life and until recently no one has really talked about flavor. But now food writers and chefs are saying, ‘Hey, we love this wheat.’ People are finally paying attention to it. We as wheat farmers are now growing a food, not a commodity.”

When applied to wheat, the term “landrace” refers to any ancient variety cultivated so far in the past and for so long that it evolved to thrive in a specific ecosystem; nowadays these primitive types are cherished as the source of wheat’s genetic diversity, which is otherwise being lost as modern high-yield strains dominate all others. The very word “landrace” is appropriate here as well, since “land-” in this context means both “regional area” and “the ground” (while in botany “-race” means “distinctive sub-variety”), so “landrace” is the native English word closest in meaning to the French terroir.

For American farmers, the difficult part about marketing these heirloom strains is convincing consumers to give wheat a second look. You can only charge a premium for specialty wheat if customers are willing to pay. Paul Muller, co-owner of Full Belly Farm in Guinda, California – who grows the heirloom Iraqi Durum used by Community Grains to make its fettuccine – is excited about the wheat renaissance.

“I’ve grown up around wheat all my life,” Muller says, “and until recently no one has really talked about flavor. But now food writers and chefs are saying, ‘Hey, we love this wheat.’ People are finally paying attention to it. We as wheat farmers are now growing a food, not a commodity.”

At the retail end, Community Grains’ Klein feels that the word “terroir” is a bit pretentious and strives to avoid it: “Terroir is just a French marketing word that scares off average people. Instead, we use ‘Identity Preserved,’ which is a USDA designation, but we go far beyond what they require.”

Indeed, Community Grains’ “23 Points of Identity” for each box is dizzyingly detailed, documenting for customers not only the wheat’s variety and point of origin but also the alkalinity of the soil, the harvest date, each kernel’s protein content out to two decimal points, and much more, right down to the names of individual farmers working the fields.

Klein is convinced that the flavors of these heirloom and landrace wheat varieties are only as good as the soil in which they’re sown. “Wheat like ours from small farms tastes superior because it’s grown in very good nutrient-rich soil,” he says. “Most generic wheat, conversely, comes from nutrient-depleted soil, because in the United States we usually grow wheat where the land is cheap, which is not great nutrient-wise. The better farmland is normally reserved for more profitable crops. But wheat from good soil gives a more ‘animated’ flavor, especially in fresh-baked bread.”

WSU’s Jones agrees that wheat grown in more desirable areas produces a vastly superior grain: “With grapes, the big flavors come from intentionally stressing the vines, but with wheat we have discovered it’s the opposite – the big flavors do not come from stress but from cool and moist conditions.”

Tom Hunton of Camas Country Mill in central Oregon is spearheading the wheat terroir movement in the Pacific Northwest, not only growing specialty wheats such as Edison Hard White (described as “buttery” and “golden”) but also inviting a growing community of local grain farmers to share his new state-of-the-art stone grist mill; without this access, they’d have to sell their high-end wheat at much lower prices on the commodity market, where its terroir would be lost.

From this small cooperative beginning, Hunton has big dreams: “We desire to bring taste and flavor to as large a population as possible, at an affordable price point,” he says.”We want to move beyond food for the elite and share these phenomenal flavorful varietals with a broader audience.”