Photo Essay: Salt of the Earth

High in Peru's Andes Mountains, members of a 600-year-old co-op harness gravity and sunlight to harvest the world's most elemental seasoning. 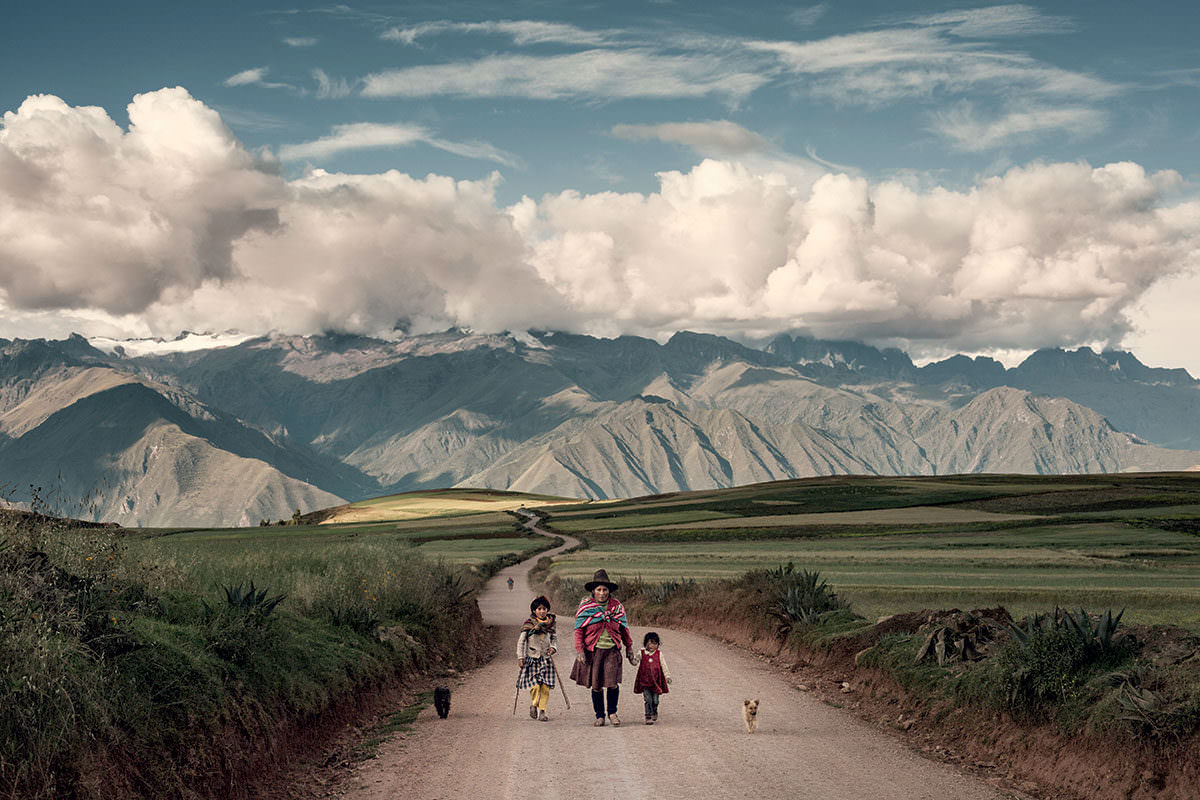 The Sacred Valley of the Incas, a mountainous region that was considered the heart of their sprawling empire, creates a dazzling backdrop for a family walking home from the Sunday market in Maras at the end of the day.
Share
Tweet
Pin
Email
1K Shares

“Every time I come here, I’m surprised,” says one of Peru’s best-known chefs, Virgilio Martinez, about the village of Maras. “There’s a huge mountain of shining white pools that produce this very beautiful and very pure pink salt.” Martinez makes a pilgrimage to the Andean town, roughly 11,000 feet above sea level, a few times a year to source the seasoning for his Central restaurant in Lima. The chef organizes his 17-course tasting menu by altitude and serves Maras salt coarse – “we like to really feel it.” Martinez has nabbed a Michelin star, but his real coup? Earning the respect of the locals who take him foraging.

A mineral as well as a metaphor, the crystalline substance signifies both authenticity (“salt of the earth”) and capability (“worth his salt”). In ancient Rome, legionnaires were sometimes paid with the stuff (hence the word salary). Despite meriting more than four pages in the Oxford English Dictionary, the world’s top flavor agent – and how it ends up on our plates – often escapes our notice.

The world’s top flavor agent – and how it ends up on our plates – often escapes our notice.

Most salt production involves mining, but that’s not the case in Maras, where the Incas engineered an ingenious system for harvesting sodium chloride six centuries ago: The tiny Qoripujio spring unearths halite (the mineral name for salt) as it trickles through a labyrinth of man-made channels that feed some 3,000 shallow pools, terraced down a mountainside.

Today, men in dusty trousers and women in full skirts, all members of the town’s salt co-op, wait for the pools’ thin layers of water to evaporate. They rake the deposits into baskets and take them to the co-op’s warehouse to be bagged and sold. This slow dance continues throughout the dry season, roughly May to November. Family members have long passed pools down to their offspring, setting up the next generation.

In addition to attracting rock-star chefs and tourists, this marvel of ancient engineering drew photographer Juan Manuel Castro Prieto, who captured these images. “The people of Maras have preserved traditions that have been lost elsewhere,” Prieto says. “I’m always looking to reflect everyday life. Nothing extraordinary happens in my pictures.” Here, however, the ordinary is nothing short of astounding. 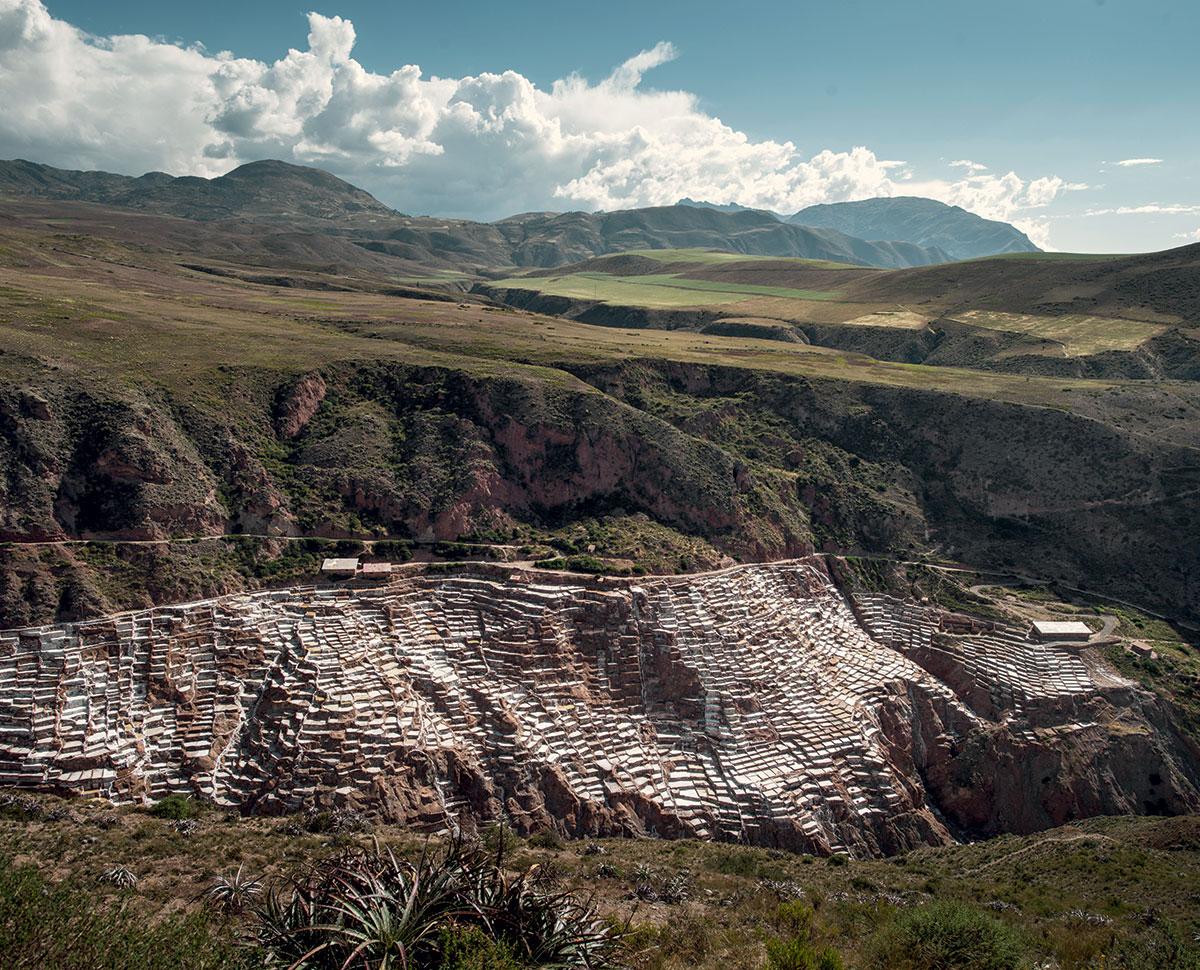 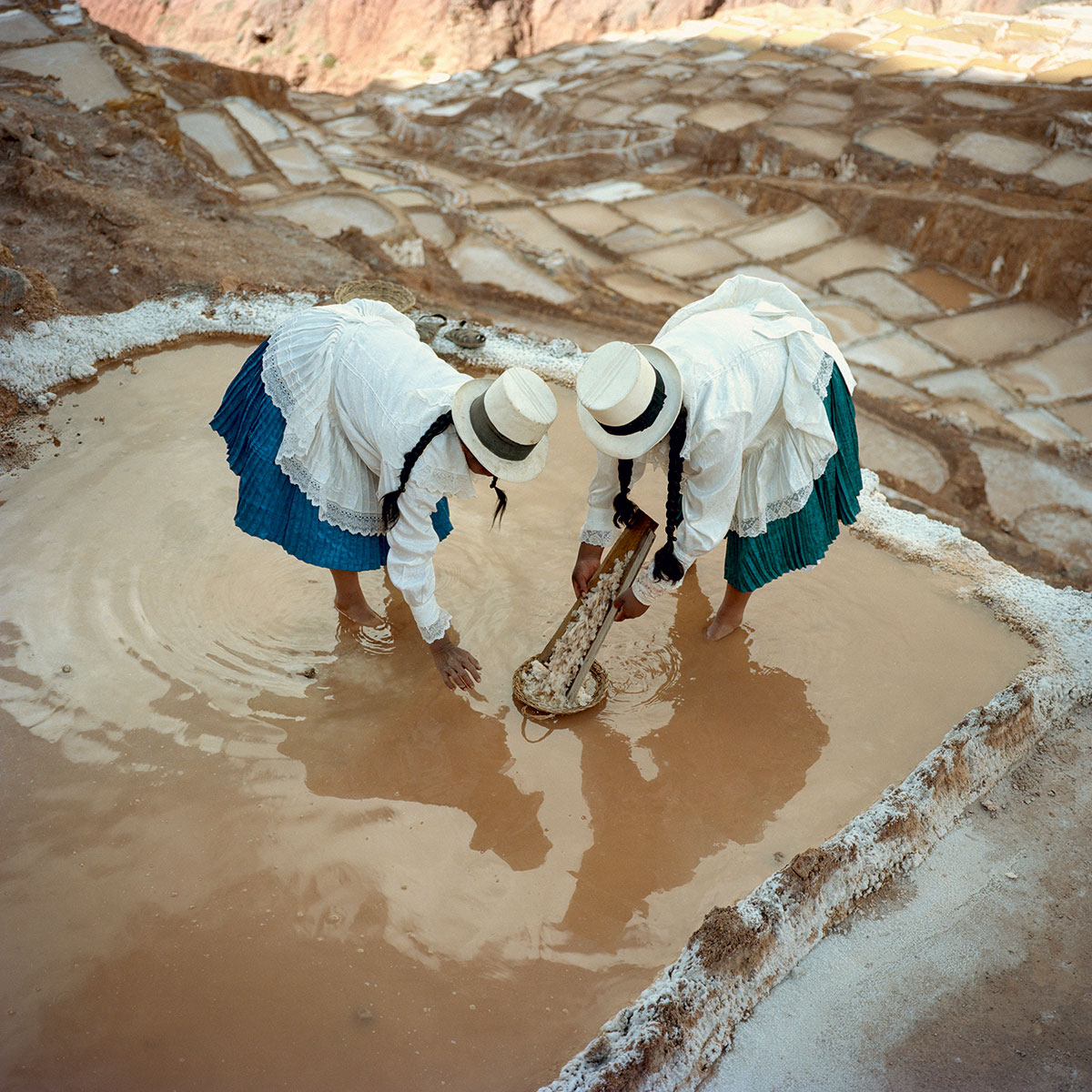 Members of the town’s co-op harvest a small batch of early salt crystals; they’ll return when the water evaporates and leaves behind a much larger haul. Their high hats identify the pair as mestizas, women of mixed native and foreign heritage. 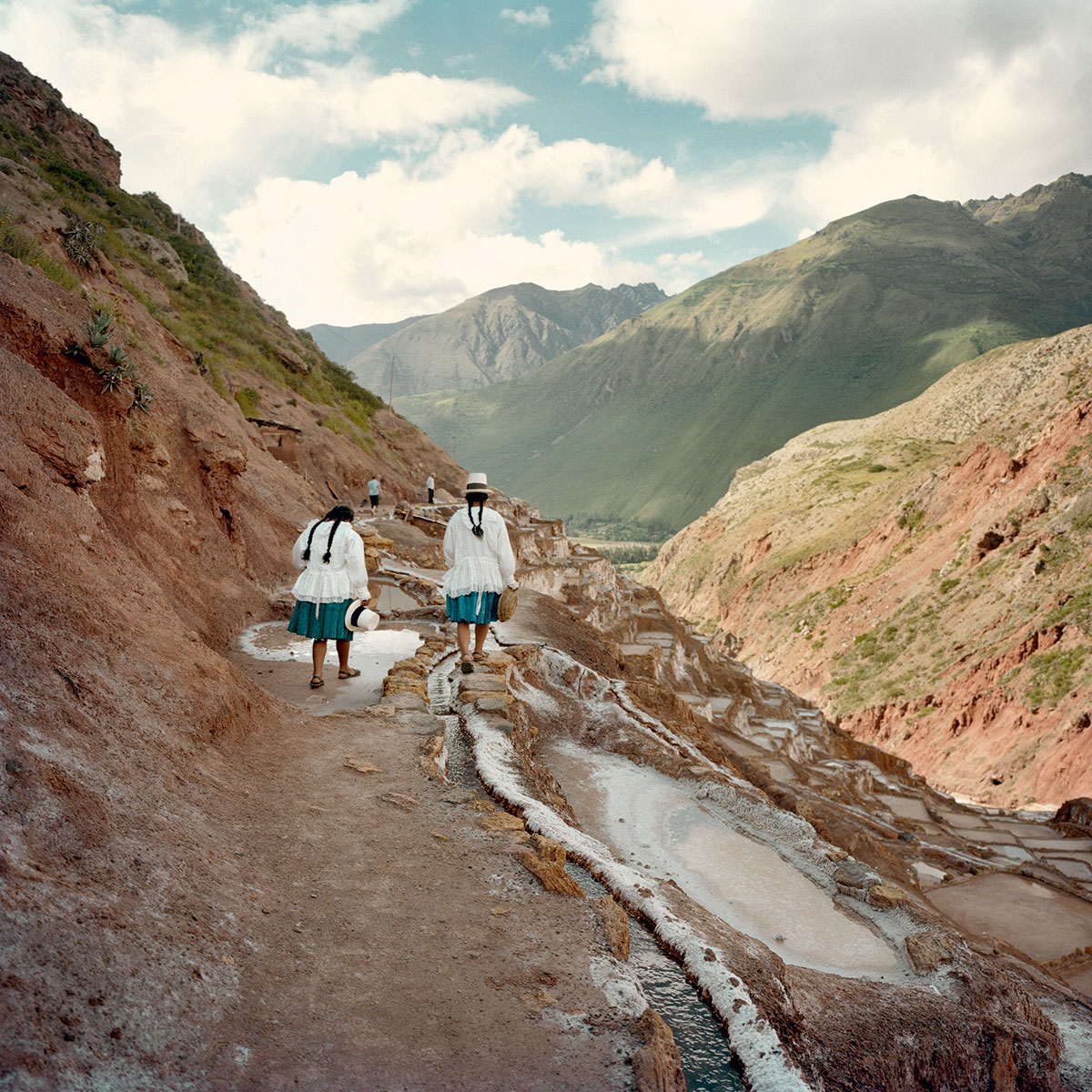 Once the water begins to evaporate, workers come out to harvest the salt left behind. 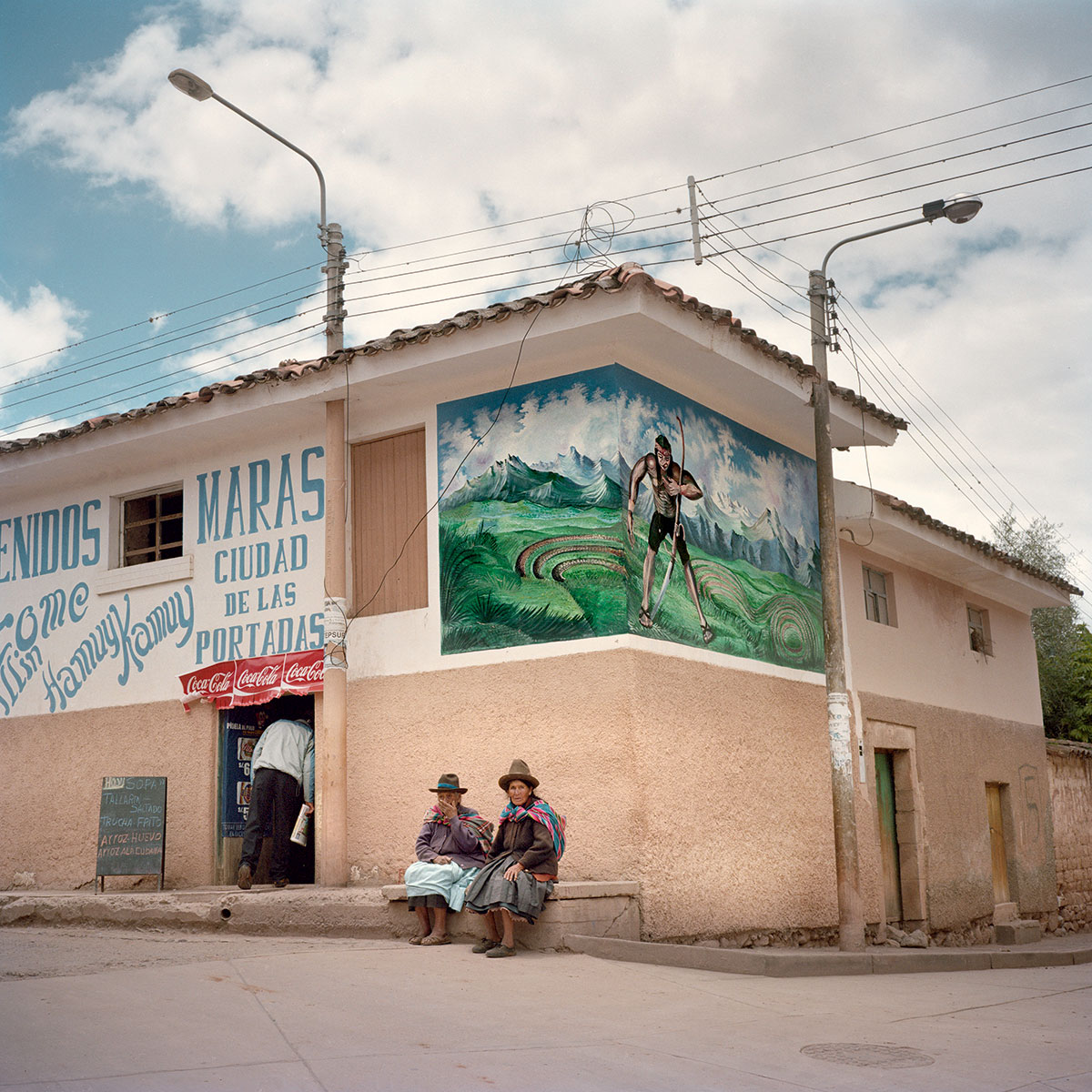 This street in Maras speaks to two local points of pride: The mural depicts the terraces of Moray, the site where the Incas are believed to have conducted crop experiments; and the slogan – Ciudad de las Portadas – refers to the town’s Colonial-era doorways, decorated with Spanish coats of arms. 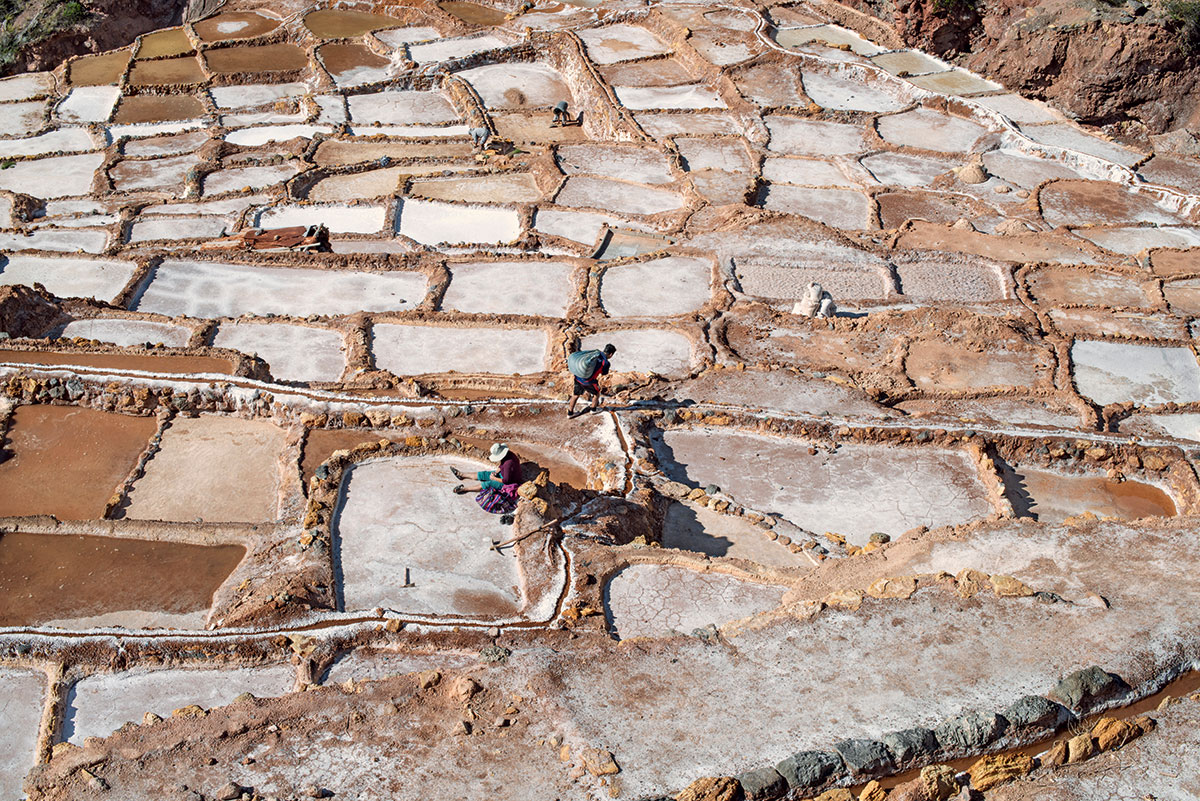 Anyone can join the co-op, but initiates start at the bottom, literally. Longtime members work the choicest pools up top, which tend to yield purer crystals, with less sediment. 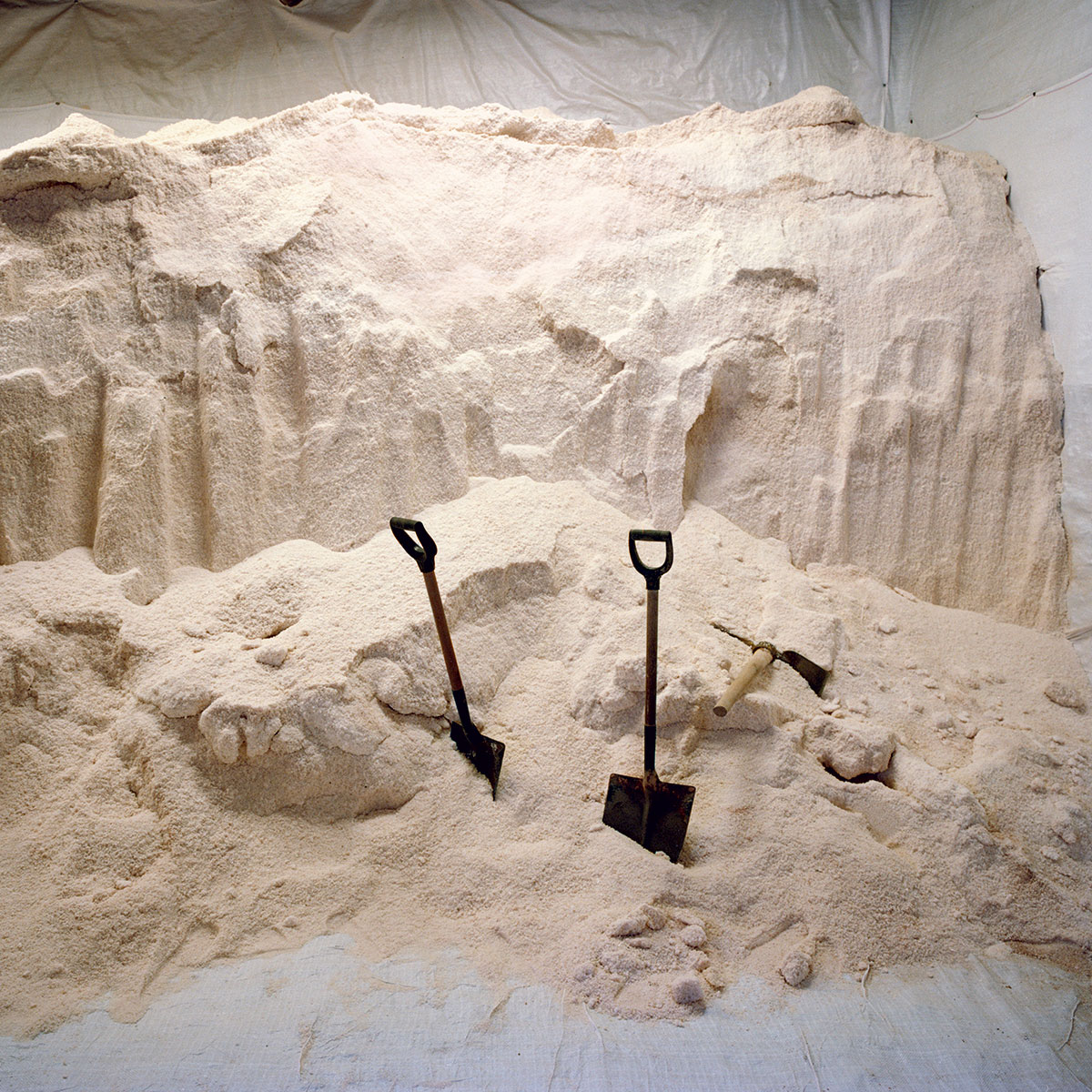 The salt harvested on Qaqawiñay mountain, piled high in the co-op’s warehouse, is generally a pale pink color due to trace elements like magnesium and iron. 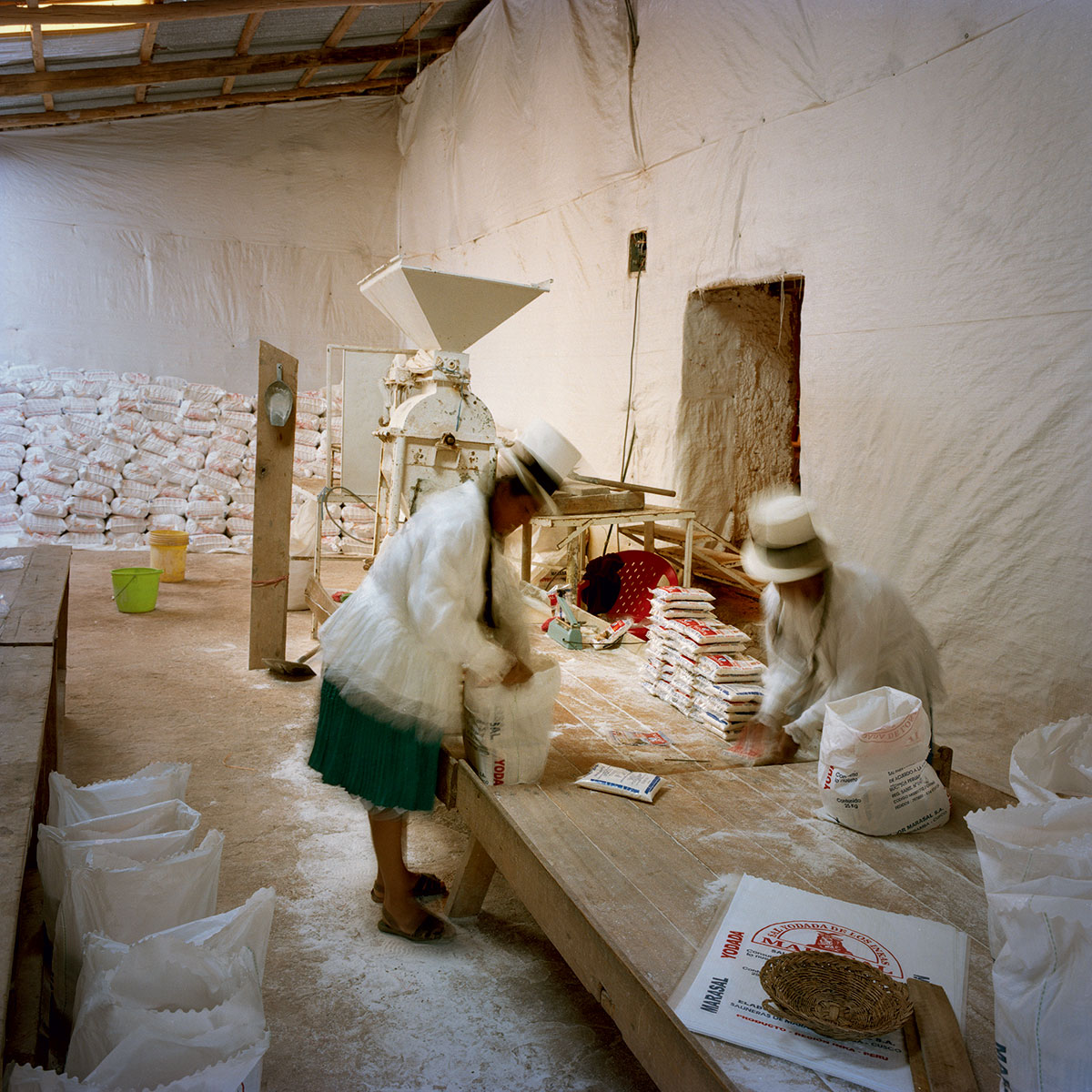 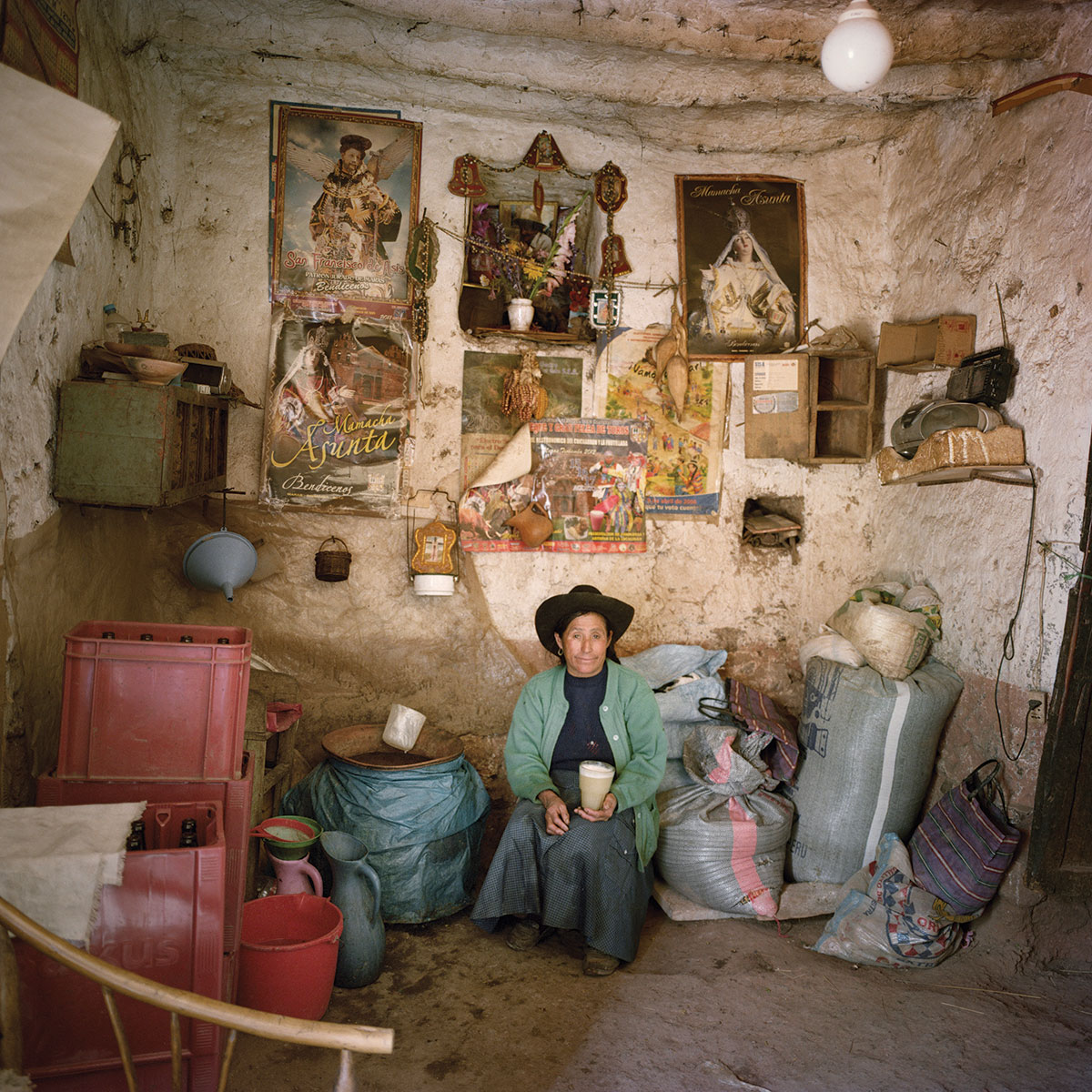 In addition to harvesting salt, Señora Olayunca runs a chicheria (a small bar that serves beer made from corn) out of her home. 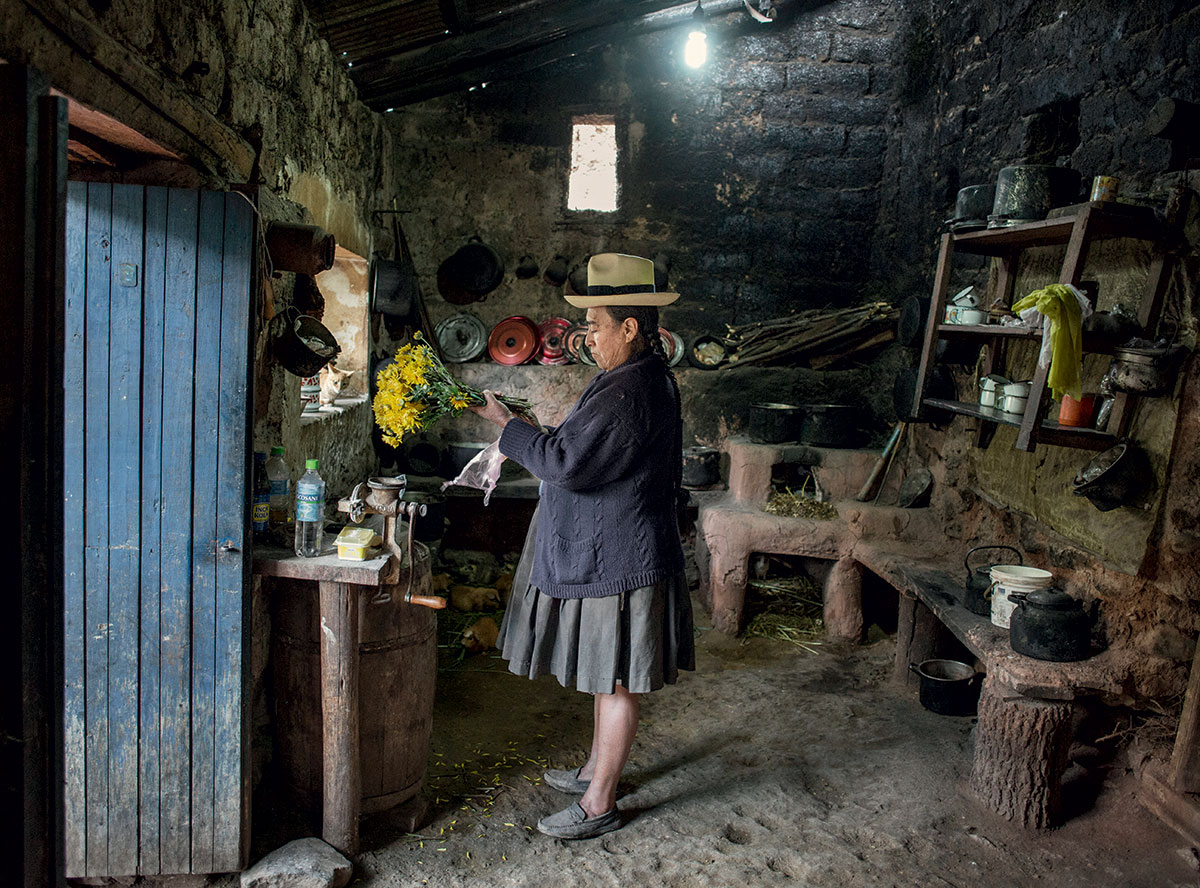 During the rainy season, Señora Loayza, photographed at home in the nearby town of Pichingoto, also farms corn and potatoes and operates a chicheria. She has harvested salt since age 17. 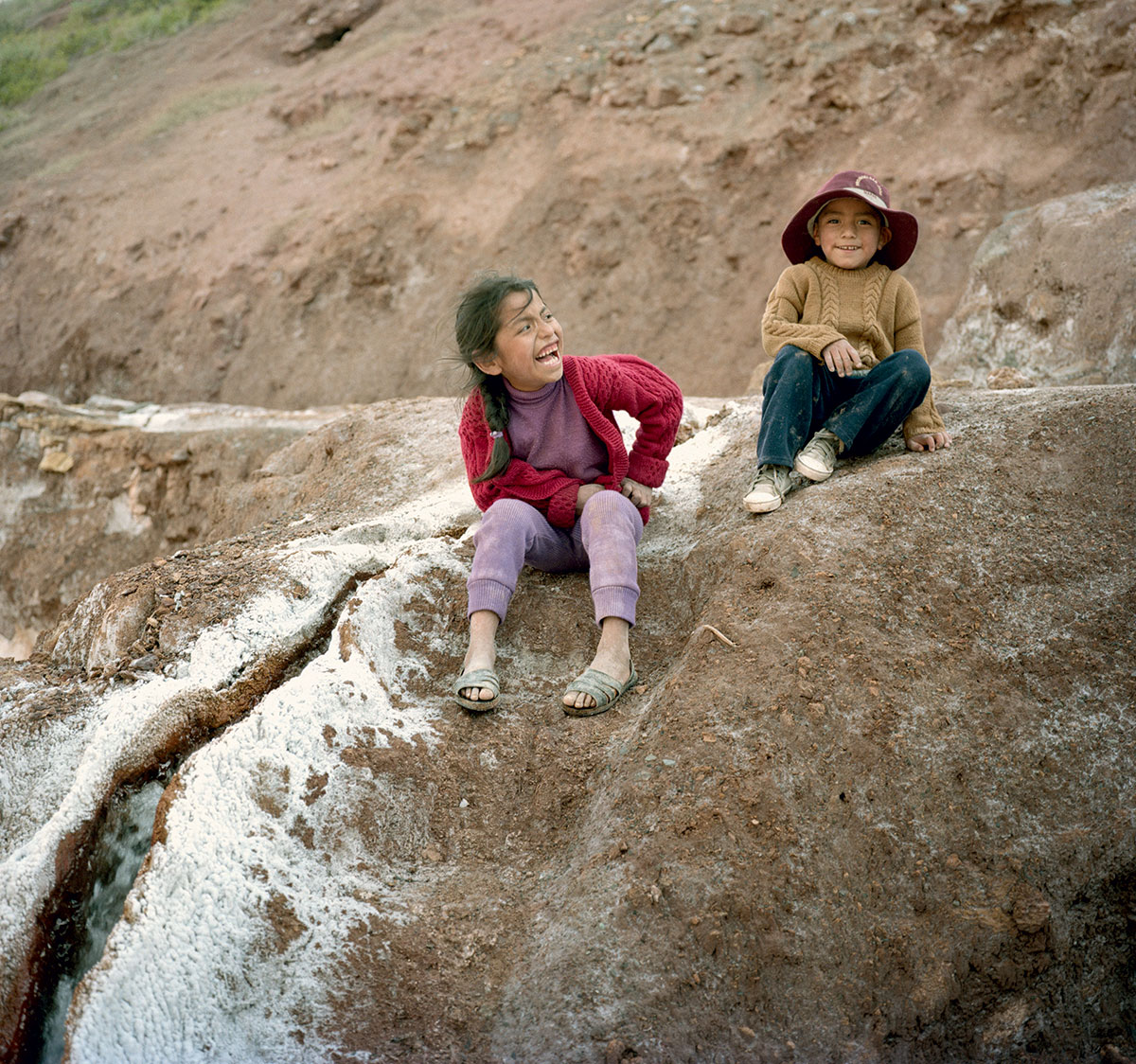 These children – next to one of the narrow but mighty channels that deliver water to the pools – will eventually inherit their elders’ pools.

Popular
Is Agroforestry the Key to Hardier Row Crops?Shea Swenson
7 Smokable Plants You Can Grow That Aren’t MarijuanaBrian Barth
Why Don’t We Eat Turkey Eggs?Dan Nosowitz
Where Has All the Mustard Gone?Chloe Faure
6 Differences Between Llamas and AlpacasAndrew Amelinckx
Explore Modern Farmer
Related
Environment, Food & Drink
Where Has All the Mustard Gone?Chloe Faure
Animals, Environment, Health
To Stop New Viruses Infecting Humans, We Must Protect Bat HabitatAlison Peel, Peggy Eby, Raina Plowright
Animals, Food & Drink, Lifestyle
The Great (Sticker Shock) ThanksgivingLindsay Campbell
Environment, Food & Drink, Water
Egg Whites Could be the Key to Cleaning Our OceansShea Swenson
wpDiscuz
We use cookies on our website to give you the most relevant experience by remembering your preferences and repeat visits. By clicking “Accept”, you consent to the use of ALL the cookies.
Cookie settings ACCEPT
Privacy & Cookies Policy