The two were harboring their own corporate-escape fantasies when they met in the mid-1990s while working at a software company. 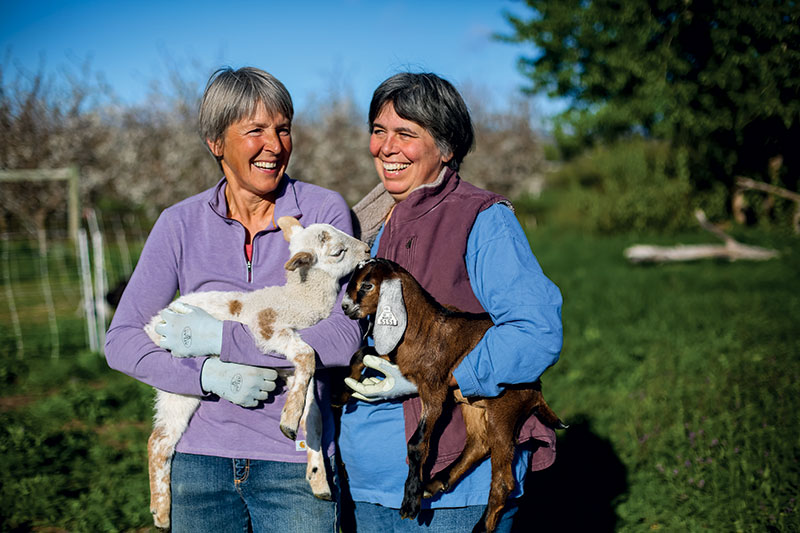 “You’re living my dream.” It’s a line Ruth (left) and Lori Babcock hear every week at the Seattle-area farmers market where they hawk their goat- and sheep-milk cheeses. “I just laugh,” says Lori. “People have this idea that cheese making is glamorous, but it’s actually pretty grueling.” Still, she and Ruth understand the sentiment. The two were harboring their own corporate-escape fantasies when they met in the mid-1990s while working at a software company. “After we started living together,” says Ruth, “we discovered that my passion for gardening matched Lori’s for cooking. The idea of farming grew from there.”

Now the couple tends some 30 Nubian goats and 20 Katahdin and East Friesian sheep, along with chickens for eggs, and cows and pigs for meat. Lori, who studied cheese making in France, crafts up to 10 types of cheeses a year. Ruth manages the herd, taking a rotational approach to grazing.

In early summer, as the grass grows furiously and the animals produce milk like mad, the women, both 57, rarely get more than a few hours’ sleep a night. They don’t mind. “Before bed, I think about what I have to do the next morning – trim these goats, move those fences,” says Ruth. “And I look forward to it in a way I never did with my old job.”

Popular
Is Agroforestry the Key to Hardier Row Crops?Shea Swenson
7 Smokable Plants You Can Grow That Aren’t MarijuanaBrian Barth
Why Don’t We Eat Turkey Eggs?Dan Nosowitz
Goat Sex: Everything You Wanted to Know But Were Afraid to AskAndrew Amelinckx
Where Has All the Mustard Gone?Chloe Faure
Explore Modern Farmer
Related
Environment, Food Waste, Labor, Meat
Is There Such Thing as Good Meat?Emily Baron Cadloff
Environment, Food & Drink
Where Has All the Mustard Gone?Chloe Faure
Animals, MTMF
Meet the Maine Teenager-Turned-Landscaper Thanks to Grazing GoatsBridget Shirvell
Animals, Environment, Health
To Stop New Viruses Infecting Humans, We Must Protect Bat HabitatAlison Peel, Peggy Eby, Raina Plowright
wpDiscuz
We use cookies on our website to give you the most relevant experience by remembering your preferences and repeat visits. By clicking “Accept”, you consent to the use of ALL the cookies.
Cookie settings ACCEPT
Privacy & Cookies Policy