Why Do Some Chickens Have Beards?

Scientists have unlocked the genetic mystery behind their facial feathers. 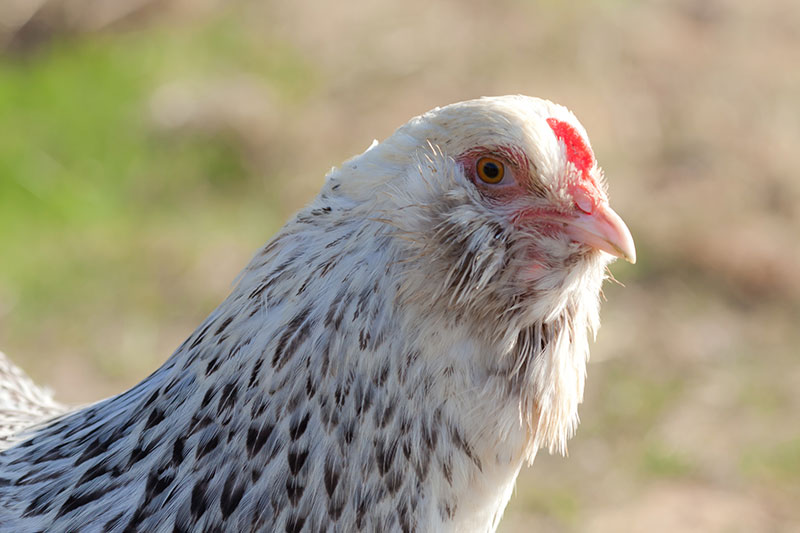 Scientists have long been stumped as to why some breeds develop these distinct patterns of feather growth. But researchers in China believe they may have spotted the genetic mutation behind the flashy looks.

The fluffy, elongated feathers that appear below the beak of some birds are known as a “beard,” and the fringe that forms on a bird’s cheeks is referred to as a “muff.” These two features don’t always go hand-in-hand, but they are both the result of the same genetic mutation. In a new study, published in PLOS Genetics, researchers have mapped the chromosome sequences of chickens with and without the distinctive pattern of feather growth, and they’ve identified the gene.

Chickens are an ideal animal to study genetics, according to the researchers. They’ve been both naturally and selectively bred for thousands of years, resulting in remarkable genetic diversity – it doesn’t take a geneticist to appreciate how amazing it is that all of these birds are part of the same species. And muffs and beards are just one phenotype – a distinct, observable trait produced by the interaction between chicken genetics and the environment. Scientists can look at these phenotypes and work backwards to try to figure out what genetic structure produces them.

The scientists examined the DNA of birds with the beard and muff phenotype, and compared it with DNA of birds without. They found that it all comes down to a specific gene, the ominously named HOXB8. “HOXB8 is an important gene, which plays roles in hair development,” says Dr. Ying Guo, researcher at China Agricultural University and the lead author of the study. The Hox group of genes help to control hair or feather growth patterns in other species, too, including humans and mice. But Guo and the team found that in chickens with muffs and beards, a genetic mutation resulted in HOXB8 being present at high levels in the facial skin. The more expressions of HOXB8, the more feather growth, and voila – the more beards.

This science isn’t just for the birds, of course. Gene mapping in domestic animals could help us learn more about the relationship between mutations in genes and phenotypes in individuals of a species, says Guo, and increase our understanding of how genes are inherited – and how they vary – through the evolution of a species. Studying the fancy feathers of backyard birds is a step toward stronger genetic science. So even if your hipster hens won’t stop clucking about their craft brews or typewriter troubles, remember that these little trendsetters might hold clues to better understanding life on Earth.