Watch Out East Coast: The Cicadas Are Coming!

Unlike swarming locusts, periodical cicadas descend upon deciduous trees in the eastern United States for a period of about four or six weeks, on specific years. 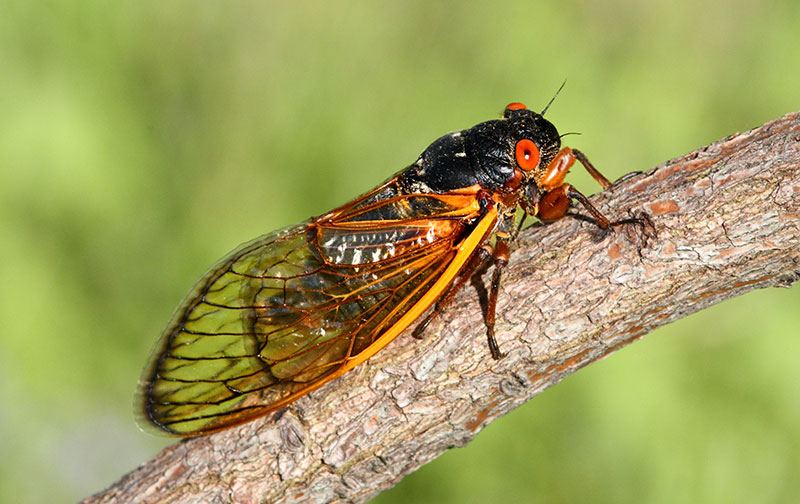 Periodical cicadas (Magicicada spp.) are among those insects that arrive in plagues.

Related to smaller bugs like leafhoppers, they are often mistakenly called locusts. But the similarities between cicadas and Biblically-significant pests are limited to their tendency to congregate en masse. Unlike swarming locusts – which eat everything green in times of drought – periodical cicadas descend upon deciduous trees (their preferred food source) in the eastern United States for a period of about four or six weeks, on specific years.

Divided into regionally-distinct and synchronous “broods,” different species of Magicicada emerge on either 13- or 17-year cycles; the vast majority of their lives are spent in a larval stage under the soil, sucking nutrients from tree roots.

For orchardists and timber growers living within plague distance, this year (and last year, for that matter) wasn’t the best time to plant new trees. At a potential density of 1.5 million insects per acre, Magicicadas can wreak havoc on a new saplings. (Though they’re unlikely to cause damage to mature trees.) Periodical cicadas emerge as nymphs and molt into imagoes (adults) only to have what is presumably the time of their lives gorging on new tree growth and reproducing as much as possible, before kicking the bucket. (What a way to go, though.)

Though the date in spring in which they emerge is dependent on soil temperature (64 degrees Fahrenheit, eight inches below the soil), the year is a constant. You could make a crude calendar based on the life cycle of the cicada if, for some reason, you wanted to divide time in multiples of 13 or 17.

Armchair scientists can report sightings to Magicicada.org, which helps map the emergence and subsequent partying of the insects, in order to get a better understanding of the range of the different broods. Here’s the most-recent map:

For tree growers in periodical cicada hot spots, there are a few things to plan around. The year before the nymphs emerge, trees will often exhibit reduced growth, as the juveniles below the soil ramp up their caloric intake from tree roots in preparation for their upcoming frenzy.

There are also some odd considerations to take into account: Growers with mole problems can expect to deal with more moles the year before an emergence and fewer the year after. This is because these insectivores feed on the larvae and thus find themselves without a food source once the nymphs have started the cycle again.

Birds like wild turkeys gorge themselves on the emerging adults: The entire survival strategy of Magicicadas is called “predator satiation,” meaning that there are so many of them that all their predators combined can’t manage to consume them all, so the survivors are able to continue the species.

As such, the insects can make an excellent and prodigiously abundant food source for domestic fowl as well. Chickens can get vital amino acids like methionine in their diets from consuming an all-natural high-protein cicada feast.

Adventurous human eaters may find some solace in consuming the pests of their tree crops: These meaty insects are also eaten by people in China, and back in 2011, a place called Sparky’s Homemade Ice Cream in Missouri tried to market a single batch of cicada-flavored ice cream.

Next year, “Brood VI” will emerge in the Carolinas and Georgia, and readers along the eastern US can arm themselves with the charts at cicadamania.com in order to find out – and prepare for – when the next local plague is expected to descend. Whether that is by releasing the chickens or firing up the barbecue, though, is a matter of taste.