How to Capture a Bee Swarm - Modern Farmer
Animals, How-To

How to Capture a Bee Swarm

Don't freak out if a swarm of bees shows up in your yard - but call a beekeeper ASAP. 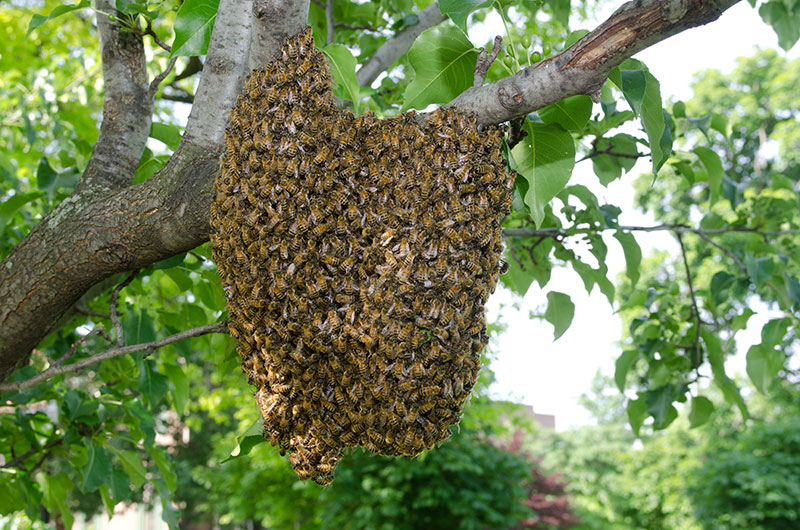 If you’ve ever come across a bee swarm – where thousands of bees cluster together in a buzzing, pulsing mass – you have an idea of what the latter is all about. Bee society normally takes place in the dark confines of the nest, but when they suddenly have the urge to find a new home, the true meaning of hive-mind is on full display.

Bees typically swarm in spring or early summer as the population of the nest – or in the case of domesticated honeybees, the hive – begins to swell. The queen bee, who until this time has never left the nest, seeks a new home with a horde of worker bees in tow. She usually lands within 100 feet or so of the old hive, while a few scout bees go out to look for a suitable new home. The rest of the bees pile on top of her to keep her warm and safe until a scout sends out a special pheromone to call the swarm to the hollow tree, chimney, or wherever they’ve discovered to build their civilization anew. Half of the bees typically stay put in the original nest, where they wait for a new queen to be born from eggs that were already laid.

Naturally, discovering a swarm of bees in the yard is frightening for the uninitiated. But it will make a beekeeper’s day. Beekeepers are always on the lookout for a swarm so they can add another hive to their collection for free. These fugitives may have escaped from a nearby beekeeper’s hive, or they may be feral honeybees living au naturel, which are especially desirable for a new hive because they tend to be genetically robust and disease-free compared to those reared by the million in apiaries and shipped in the mail.

Since a swarm of bees is on a mission and have no babies to protect, the bees are relatively docile and aren’t likely to sting you. Still, don’t go meddling with them. Contact your local beekeepers’ association; they can likely put you in touch with someone to come capture the swarm. But you have to act fast – the bees typically migrate to their new home within days, if not hours. And if someone doesn’t come along to coerce them into a proper hive, they may make that new home somewhere you don’t want it.

Capturing a swarm is a surprisingly simple, though fascinating, process. Whether you’re new to beekeeping and seeking to add a hive, or just a homeowner wondering what to expect when the beekeeper you’ve contacted comes to the rescue, here’s how it works.

How to Capture a Bee Swarm

Swarms often land on a tree or shrub about head high, where they are relatively easy to catch. Sometimes they land high in a tree or along the eaves of your house, which requires a ladder to catch them. We don’t recommend this unless you are extremely confident both with climbing ladders and bee-handling. Bees can swarm onto pretty much any object, weather a fence, mailbox, or your car. As long as the beekeeper can safely access them, the process of collecting them is essentially the same.

1. Find a suitable container. You can use an empty beehive, or a cardboard box or plastic tote of similar dimensions. The key is that it has a lid and ventilation. If you have to improvise on short notice, cut holes in the container and staple screen material over the top to keep the bees inside during transport.

2. Suit up and get ready. You definitely need to wear a bee suit in case the bees get agitated. You’ll also need a bee brush to sweep them into the box, though a soft-bristle whisk broom works in a pinch. If feasible, most beekeepers like to spread an old bed sheet on the ground directly under the swarm to catch the bees that don’t initially make it into the box. Use rocks or some other weight to hold down the edges of the sheet so it doesn’t blow around in the wind.

3. Dislodge the bees. Hold the box directly under the swarm and give a strong shake to the object on which the bees are congregated. This should dislodge the majority of the bees into the box; then quickly sweep the remaining bees into the box before setting the box on the sheet directly below the location of the swarm. Shaking works well for branches, but for fixed objects like a wall or telephone pole, sweeping is the only option to dislodge the bees.

4. Stand back and observe. You won’t get all the bees into the box with the initial shaking and sweeping, but as long as the queen ended up in the box the remaining bees will soon follow. If the queen is not in the box, you’ll see the bees climb out and return to her – should that happen, give them some time to settle back into a single mass and then repeat the process.

5. Wait for the stragglers. If you have the time, leave the box until dusk so that the scout bees will join the group as they return throughout the day. To encourage the bees to stay put, it’s best to put the lid on the box while you wait, leaving it open just a tad to admit the stragglers. But if you’re in a hurry, go ahead and brush any bees from the sheet into the box and head home with your bounty.

6. Set up the new hive. Close the box, leaving the ventilation holes open, and transfer the bees into their new hive within 24 hours.

I have a hive that has swarmed into an empty outdoor electrical of my neighbors house and seems to be inside the wall. Is there any way to entice the bees out, since we obviously can’t get in to sweep them and don’t want to tear into the interior wall! Please help.