Is marketing wheatgrass as a health-food product a cynical ploy to move more wheat seed? Or is the leaf, and not the kernel of wheat, the part of the plant we should all be consuming for a long happy life? 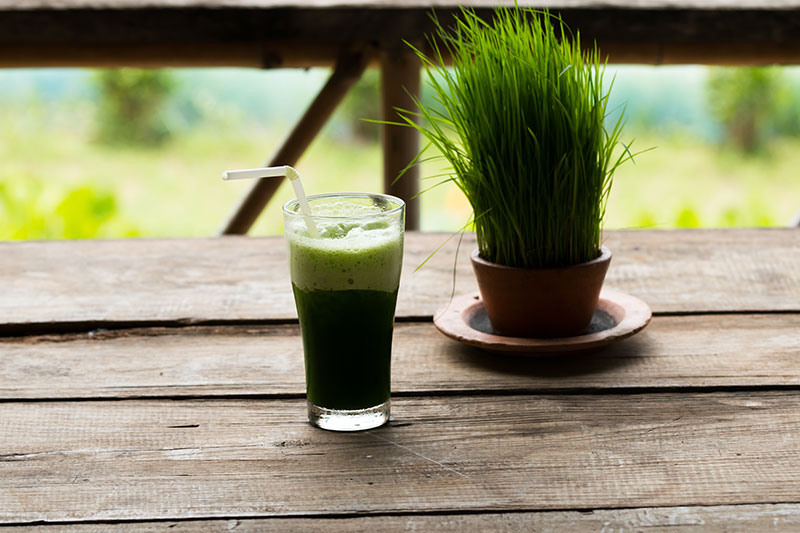 My hometown of Sherwood Park, Canada, is the birthplace of Booster Juice: Canada’s largest smoothie bar chain. I remember approaching the counter one day after soccer practice, and seeing a curious little flat of grassy sprouts, the contents of which were being freshly juiced into 30 milliliter shots. Feeling adventurous, I sprung for a dash of this mysterious grassy green elixir in my Mango Tango smoothie, but was disappointed to find that I paid extra to make my tropical fruit blend taste like a freshly-mowed lawn.This was my first encounter with wheatgrass.

A couple of years passed before I figured out what, exactly, wheatgrass is. The answer somewhat banal: It’s wheat, or more specifically, the monocotydedon (or embryonic leaf) of Triticum aestivum, the common wheat plant.

The consumption of immature wheat shoots – whether in a smoothie, in powderized and pill form, or in topical applications like lotions, sprays, and massage creams – is a surprisingly polarizing subject in the nutrition world. There are fervent believers in its healing and nutritional powers, especially among raw food and alternative medicine enthusiasts.

There is, however, little scientific evidence to back up some of the more outlandish claims by devotees: According to Natural News, a “science-based natural health advocacy organization,” for example, wheatgrass is nothing short of a cure for cancer. According to the outlet, Danny McDonald, a 74-year-old from Ireland diagnosed with stomach cancer, “…cured his cancer and is now a living testament to the life regenerating power of wheatgrass.”

None of these cancer-killing properties have been demonstrated in any peer-reviewed scientific paper on oncology.

More modest endorsements – from firms like Booster Juice that sell it – hail wheatgrass as a great source of chlorophyll, enzymes, and amino acids, as well as dietary minerals and vitamins like iron, magnesium, calcium, vitamin A, vitamin C, vitamin E, and vitamin B12.

Suffice it to say, the reviews are mixed.

So, is marketing wheatgrass as a health-food product a cynical ploy to move more wheat seed? Or is the leaf, and not the kernel of wheat, the part of the plant we should all be consuming for a long happy life?

Belief in this grass being an invigorating tonic can be traced back to ancient Mesopotamian and Egyptian civilizations. In more recent history, wheatgrass was the research darling of Charles Schnabel (1895-1974), an American agricultural chemist who would come to be known as “Mr. Wheatgrass.”

Schnabel’s early research revealed that adding a small amount of dehydrated cereal grass to the feed of livestock like poultry, cattle, and swine increased their general health and productivity.

His early research revealed that adding a small amount of dehydrated cereal grass to the feed of livestock like poultry, cattle, and swine increased their general health and productivity. Schnabel theorized humans could similarly benefit, and started Cerophyl Laboratories in 1933, marketing dry powdered wheat shoots – which were harvested before the grass started “jointing” in preparation for seed production – as “the world’s first multivitamin.”

Taken orally, or as an enema (fun!), she theorized that the chlorophyll-heavy brew could “detoxify” the body, curing all sorts of ailments, from stomach cancer to insanity. Many of her suppositions were based on the fact that wheatgrass juice has roughly the same pH as human blood: an alkaline 7.4. Wigmore published her definitive volume on the matter, The Wheatgrass Book, in 1985.

In 1998, William Jarvis, Ph.D, a retired professor of public health and preventive medicine at Loma Linda University, and an advisor to the American Council on Science and Health, wrote about Wigmore’s claims for the National Council Against Health Fraud (NCAHF), which is a “private nonprofit, voluntary health agency that focused upon health misinformation, fraud, and quackery as public health problems.” He also founded the NCAHF in 1977.

Taken orally, or as an enema (fun!), Wigmore theorized that the chlorophyll-heavy brew could “detoxify” the body, curing all sorts of ailments, from stomach cancer to insanity.

He doesn’t mince words: “The fact that grass-eating animals are not spared from cancer, despite their large intake of fresh chlorophyll, seems to have been lost on Wigmore.”

Jed W. Fahey, Sc.D., a nutritional biochemist who runs the phytochemistry laboratories of the Cullman Chemoprotection Center (part of the Johns Hopkins University School of Medicine) is similarly skeptical of the health claims surrounding the young shoots of the common wheat plant.

Fahey’s research specifically deals with nutritional strategies for the prevention of chronic disease in humans, and includes studies on disease-preventing phytochemicals in cruciferous vegetables like broccoli. Basically, he would be the expert you’d want to ask about which plants to have around to help stave off illness and death.

In an email to Modern Farmer, Fahey writes: “I am unaware of any credible scientific evidence that consuming wheatgrass or wheatgrass juice is any better or worse for one than consuming similar amounts of other green leafy vegetables. My personal opinion is that broccoli is probably much more nutritious, but I am biased.”

He adds, “Certainly there is not a body of robust evidence either in human beings, in animals, or in petri dishes, that wheatgrass is a superfood, from a nutritional or a medicinal perspective. Many of the claims ascribed to wheatgrass point to its chlorophyll content or its detoxification ability, but it has no superpowers in these departments either.”

Most importantly, perhaps, Fahey assures: “There is no credible evidence wheatgrass cures cancer.”