In the future, automated robots will be dispatched to water, fertilize, and weed fields. 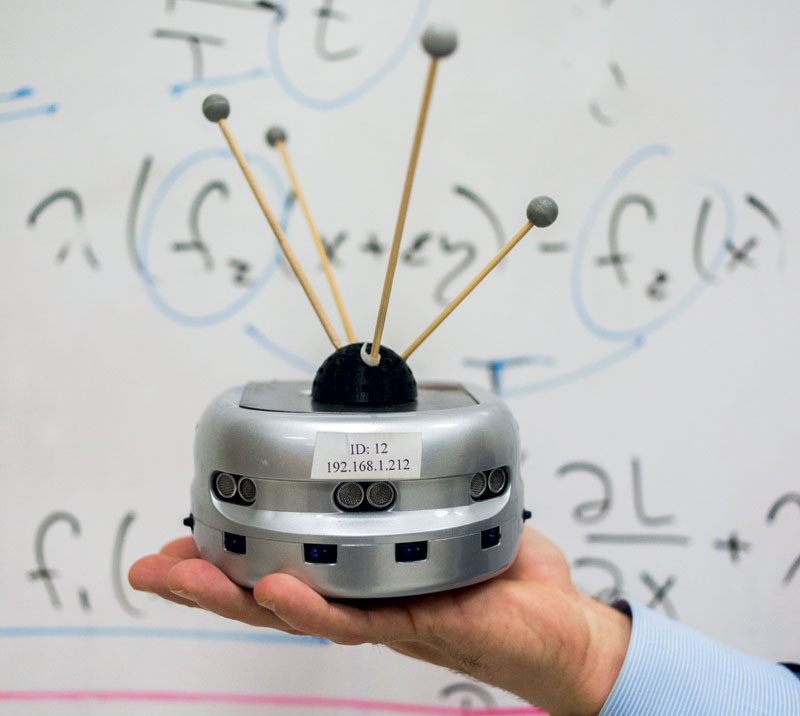 In the future, automated robots much like this prototype will be dispatched to water, fertilize, and weed fields.
Photography André Gallant
Share
Tweet
Pin
Email
465 Shares

But it’s a mob of autonomous, palm-size machines, which roboticists call “the swarm,” that promises to truly revolutionize food production.

Small and nimble, these solar-powered robots (above) will eventually be able to tend individual plants without wasting resources or leaving large environmental footprints, says Magnus Egerstedt, a roboticist at the Georgia Institute of Technology, who is currently researching mechanisms for controlling and directing the swarms. “By being more targeted, by only applying fertilizer where needed, you’re going to get better crops and save money,” notes Egerstedt, who believes the swarms of the future will one day work as constant gardeners, caring for crops daily over their life cycle. They’ll likely be equipped with sensors to diagnose illness in individual plants, suited with small tanks of water and fertilizer or seeds for planting, even given mechanical arms for weeding and culling.

While experts are still a few years away from figuring out how farmers will interface with the compact machines – and, say, direct them to one side of a field with a single swipe on a tablet – much of the robotic technology is ready, according to Egerstedt. Private manufacturers of farm equipment, the National Science Foundation, and the U.S. Navy, all funders of his research on swarm technology, eagerly await the finished product.

The idea of an army of farming robots may challenge certain bucolic notions, but Egerstedt insists the intention is not to replace farmers, but to reduce their workloads: “This technology is meant to free them so they can focus instead on the business and science of farming.”

Popular
7 Smokable Plants You Can Grow That Aren’t MarijuanaBrian Barth
New Solar Panels Allow Farmers to See the LightNaoki Nitta
6 Differences Between Llamas and AlpacasAndrew Amelinckx
The Cold Swim HomeMarcie Callewaert
This Modern Farmer Wants You to Grow a New Potato StrainBevin Cohen
Explore Modern Farmer
Related
Environment, Labor, Water
California Farms and Farmworkers Attempt to Recover From Record FloodsNaoki Nitta
Aquaculture, Technology
Can Interactive Mapping Tools Guide Shellfish Restoration?Bridget Shirvell
Food Waste, Opinion, Politics, Technology
How Solar-Powered Refrigerators Could Cool Down Climate ChangeAbay Yimere
Food Security, Labor, news
A New Egg Co-operative Has Hatched in the Western U.S.Lindsay Campbell
wpDiscuz
We use cookies on our website to give you the most relevant experience by remembering your preferences and repeat visits. By clicking “Accept”, you consent to the use of ALL the cookies.
Cookie settings ACCEPT
Privacy & Cookies Policy