From N16 to SW9: How London's Urban Farmers are Cultivating the City - Modern Farmer
Lifestyle

From N16 to SW9: How London’s Urban Farmers are Cultivating the City

From the UK's first acquaponic vertical farm to a bee apiary that spans the city's gardens and rooftops, a new generation of farmers are transforming London into an urban acreage. 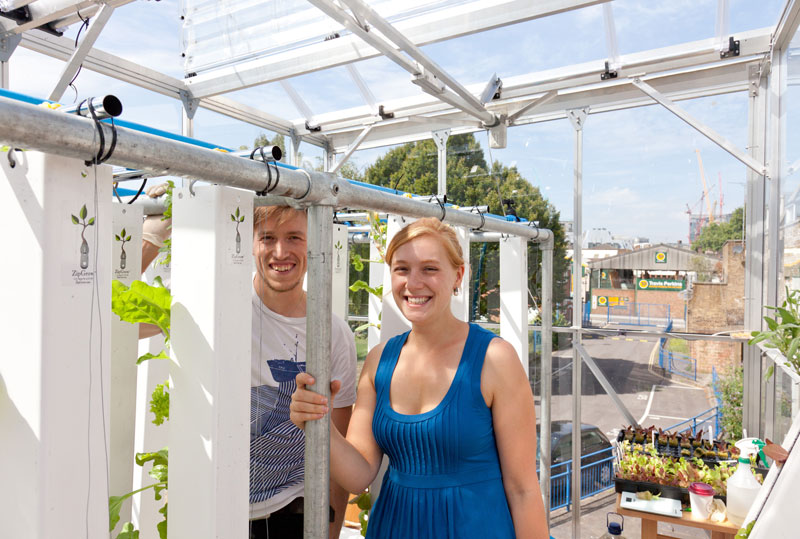 Cultivating derelict and under-utilized spaces, urban beekeepers, growers, and brewers are leading a green revolution in one of Europe’s most densely populated cities. Although in its infancy, young entrepreneurs with a commitment to sustainable growing and food production are finding opportunities to grow food commercially. From the UK’s first acquaponic vertical farm to a bee apiary that spans the city’s gardens and rooftops, we look at three businesses who are leading the way.

Former management consultant and a graduate of Climate-KIC, Kate Hofman believes to produce food in our cities we simply need to find the right products to grow in the right places. “This is why we think acquaponics and vertical farming is the right combination,” she says. “You are making the most effective use of space, while looking at food production holistically.”

Now Hofman is CEO of GrowUp Urban Farms, a sustainable farming business she and her business partner Tom Webster co-founded in 2013. Using aquaculture (fish farming) and hydroponics (cultivating without soil), they grow herbs, salads, and fish. In this agrisystem, the water is cycled through fish tanks to the plants and back again. The fish provide fertilizer for the plants that in turn filter the water for the fish. 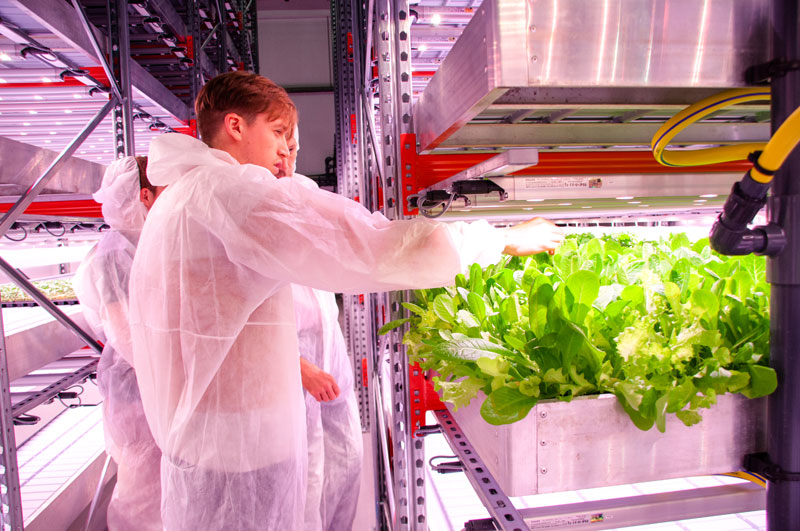 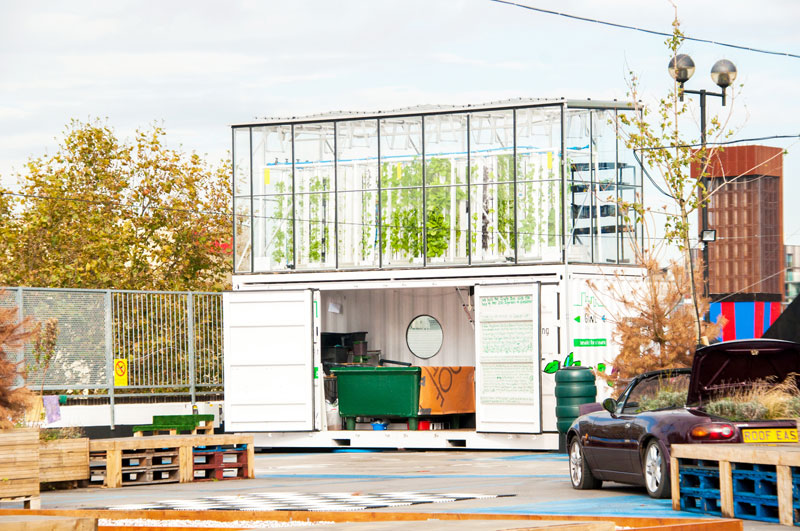 An industrial estate in east London would seem an unlikely site for such an enterprise; yet, it is this innovative approach that defines their business. “It is really important to reconnect people who live in cities with how their food is produced and that means growing food close to where people live. This is why growing in warehouses and city centers is such a viable option,” says Hofman.

Launched with a crowd-funding campaign on Kickstarter, the UK‘s first commercial aquaponic vertical farm started as The GrowUP Box – a converted shipping container. However, their vision for the business was always more ambitious than this prototype, with the duo raising £1.2 million ($1.7 million USD) last year to build Unit 84. Currently at 40 percent capacity, this 6,000-square-foot warehouse will be fully operational by April 2016, when they will reach their target of growing 20,000 kilograms of herbs and salads, and 4,000 kilograms of fish a year.

With the desire to have a social and environmental impact, Hofman describes their business as one “committed to feeding people in cities in a way that is positive for communities and the environment, today and in the future.” They will do this by creating local jobs, selling 25 percent of GrowUP produce locally, and working with customers to plan supply. An onsite education center will also be added, so “we can educate people about how food is produced, what it takes to produce it, and what it means to farm sustainably.”

Urban beekeepers and farmers, Chris Barnes and Paul Webb have some of the best views of London, whether they’re looking across the River Thames or the rooftops of Shoreditch. Whereas most Londoners would think real estate, Barnes & Webb think of something altogether different. “When we‘re on a rooftop looking around we often see places that would be great for another hive,” Webb says. “As the city gets more densely populated, rooftops are massively under-utilized. We need to cultivate more unused space in London for growing.” 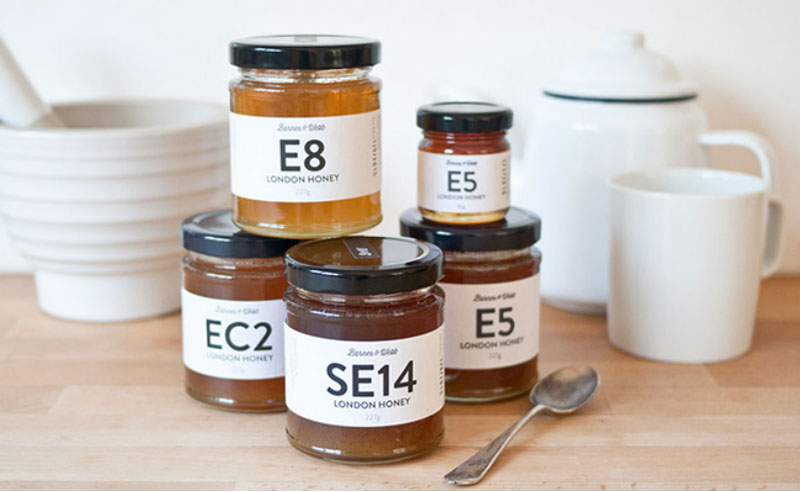 Since 2013, the duo have been installing and renting beehives across London rooftops and gardens, maintaining 40 hives throughout the season, and sharing between 20 and 50 percent of the honey collected depending on the rental fee.

With only 15 percent of all honey consumed in the UK being produced locally, Barnes & Webb offer an alternative. Their postcode honey is named after the area of London from which it is collected, with each batch reflecting the diversity and complexity of the local nectar. As Webb explains: “Our N16 honey last year was very light and very floral. You could almost taste the flowers in that one. We have had other honeys like the one in Putney, which was very dark, richer and toffee-flavored in its first year.”

Barnes & Webb sees their role as urban beekeepers as an important environmental and social one. All their honey is filtered by hand and sold in shops as close to the hives as possible, sometimes within walking distance. In 2016, they will sponsor their first community hives in underprivileged areas of London. They are keen to engage locals in caring for the bees as well as encourage the planting of pollinator gardens. The benefits according to Webb are: “We are giving people an active connection to a place, supporting local businesses and providing a much more personal relationship with food.”

“We reckoned that every great neighborhood deserves a great brewery, and we wanted to bring one to ours,” says Jez Galaun of Brixton Brewery, the microbrewery he founded in 2012 with Mike Ross.

Today from two converted railway arches near the center of town, Brixton Brewery produces a range of beers from pale ales to robust stouts. Everything is brewed on site with the team delivering to local restaurants and bars using a porter‘s trolley. Even its beers are named after local landmarks. “It was very conscious to be this local,” says Galaun. “From the beginning, it was something that we really built into our ethos as a business: to be local, to support local causes, and supply local businesses.” 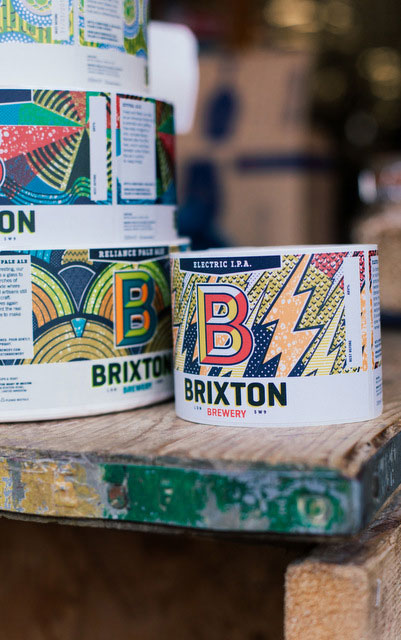 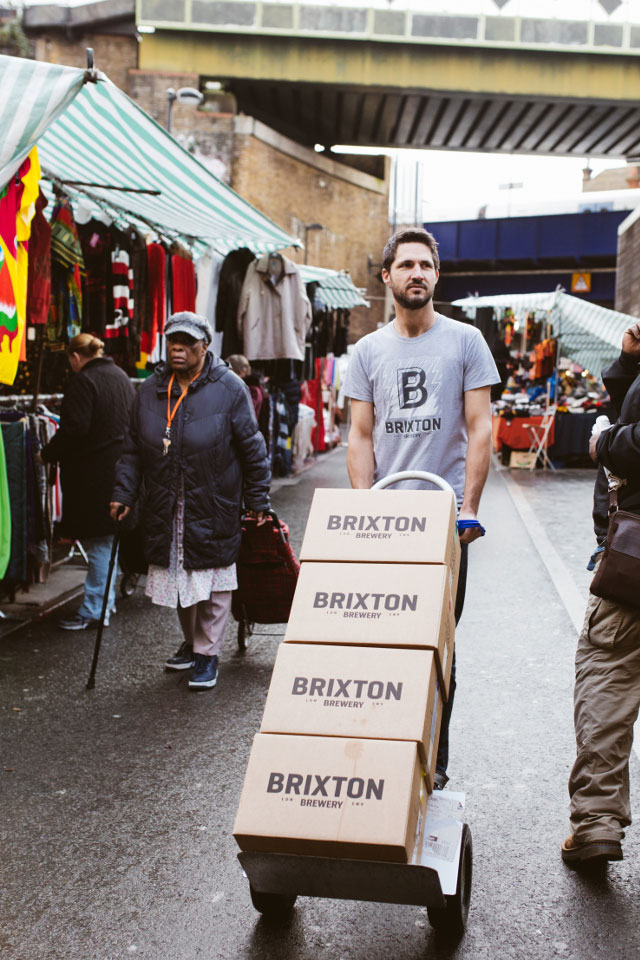 One such cause is the Brixton Beer Company. This initiative of City Farmers encourages people to grow hops in community gardens and backyards. Brixton Brewery creates a limited version of its Effra Ale using its share of the harvest. In September, hops arrive fresh at the brewery where they are picked by hand, including the ones that Galaun brings from his own garden. More than 1,000 litrers are produced with the hops giving the ale “a fresh, verdant, grassy type of flavor”.

Despite its commercial success, Brixton Brewery remain staunchly local, loyal to the community that has supported it. “We are in a growing market but we want to expand in the right way and stick to our principles and values,” Galaun says. “It would be wrong of us to spread ourselves too thinly and not to be able to supply the people who have supported us from the beginning.”

Popular
7 Smokable Plants You Can Grow That Aren’t MarijuanaBrian Barth
Hell in High Water: The Story of Devils Lake, North DakotaSharlene Breakey
Record-Breaking Egg Profits Prompt Accusation of Price GougingClaire Carlson, The Daily Yonder
6 Differences Between Llamas and AlpacasAndrew Amelinckx
New Solar Panels Allow Farmers to See the LightNaoki Nitta
Explore Modern Farmer
Related
Environment, Labor, Water
California Farms and Farmworkers Attempt to Recover From Record FloodsNaoki Nitta
Books, How-To, Lifestyle
How to Turn Your Garden Into a Business, No Matter the SizeEmily Baron Cadloff
Food Security, Labor, news
A New Egg Co-operative Has Hatched in the Western U.S.Lindsay Campbell
Food Waste, Plants, Technology
New Solar Panels Allow Farmers to See the LightNaoki Nitta
wpDiscuz
We use cookies on our website to give you the most relevant experience by remembering your preferences and repeat visits. By clicking “Accept”, you consent to the use of ALL the cookies.
Cookie settings ACCEPT
Privacy & Cookies Policy