The link between transportation and food access is broken in many inner city neighborhoods - transforming transit hubs into food hubs is one way to mend it. 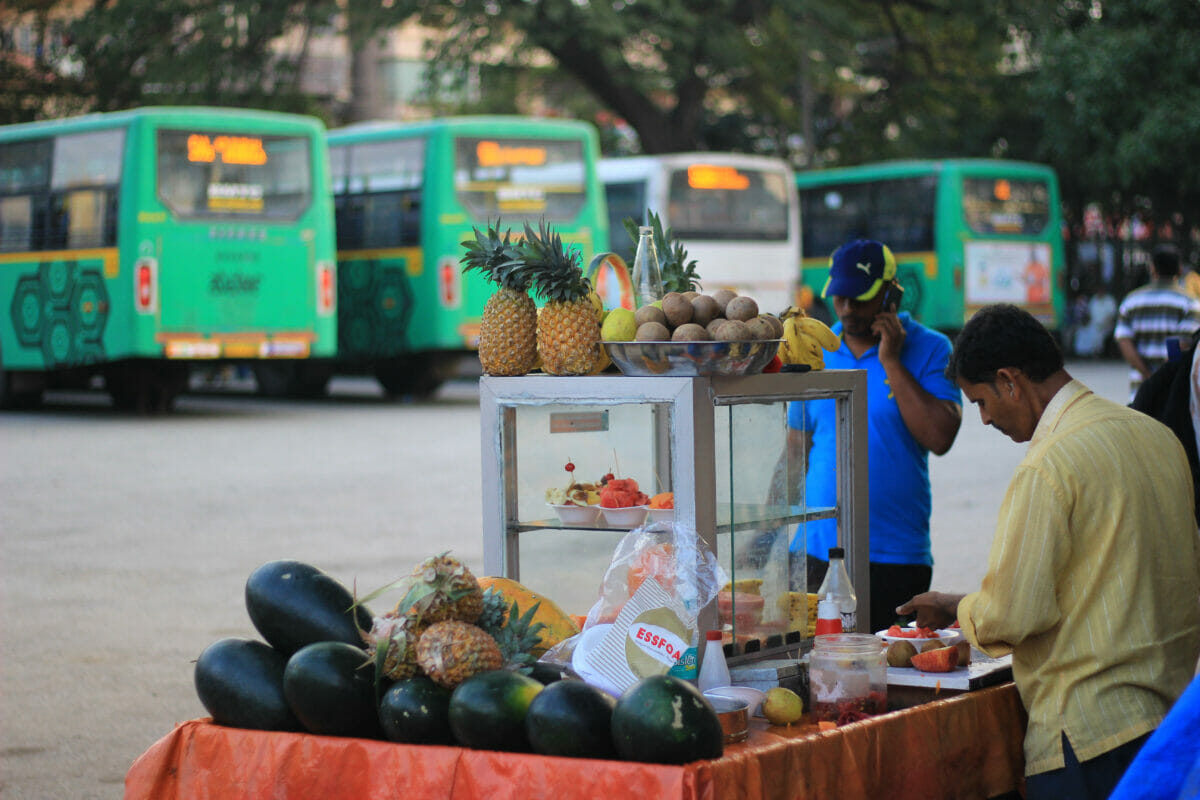 “Food deserts” – low-income neighborhoods with plenty of quickie marts and liquor stores, but lacking full service grocery stores that sell fresh fruits and vegetables – are an epidemic in American cities, affecting 23.5 million people. The USDA has several ways of defining food deserts, but the common denominator is that most residents in these neighborhoods lack a car to go buy food in other neighborhoods that have legitimate grocery stores. In other words, food desert residents are reliant on public transportation, which is difficult to navigate with a family’s worth of grocery bags in hand, so they make do with what’s available at the corner store.

Following in the footsteps of food trucks, mobile farm stands – on decommissioned city buses, converted delivery vehicles, end even pedal-powered models – have proliferated over the last five years as a way to make farm fresh goods available, typically at discounted prices, in low-income neighborhoods. And in the past eight months, several cities around the US have piggybacked on that idea by establishing tiny, pop-up style farmers markets at bus stops and transit stations, so folks can grab the makings of a wholesome dinner as they make their way home from work each day.

Much of downtown Dayton, a small city halfway between Columbus and Cincinnati, qualifies as a food desert, but the dearth of fresh food is a little less extreme since a farm stand opened up last September at Wright Stop Plaza, the city’s main transit center. Known simply as The Market, it’s a joint partnership between the county government and Homefull, a local homeless services organization. Homeless folks staff the market, gaining job skills and food for the day in the process, while transit riders can dash in for a basket of produce before they walk home or as they transfer buses. The Market is open four days a week, and there is an extra perk to encourage those that qualify for SNAP benefits to become regular patrons: For every dollar spent, they get a voucher for a free purchase next time in the same amount (up to $10).

Open one day per month from February through April, this pilot project is modeled after the one in Dayton, but in this case it was Tampa’s transit authority, HART, that initiated the project together with the local non-profit Keep Tampa Bay Beautiful. The produce is provided by Florida Urban Organics, a bio-organic operation in nearby Riverview, Florida. The USDA chipped in $98,000 to make the farmers market happen, as well as to provide educational materials on how to cook the produce that its patrons bring home and how to grow some of their own in their backyard. EBT payments (formerly known as food stamps) are accepted. If the pilot program is deemed a success, HART intends to make it a permanent feature.

Last July, Atlanta debuted its own version of the bus station farmers market, except this one is at a subway stop in Atlanta’s West End neighborhood, where almost 50 percent of residents live below the poverty line. A collaboration between MARTA (Atlanta’s transit authority) and the Atlanta Community Food Bank, the Fresh MARTA Market will be open one day a week again this year from spring through fall. In addition to fresh produce and two-for-one SNAP purchases, cooking demos, a weekly bike tour of nearby urban farms, and free consultation about food assistance programs (like SNAP) will be available. If all goes well, the plan is to eventually open a farmers market at each of MARTA’s 37 stations.

From Food Desert to Food Hub: The West Louisville FoodPort

On the site of a boarded up tobacco factory in one of Louisville, Kentucky’s most forlorn neighborhoods, where one in four residents is unemployed and the median family income is just above $20,000, the largest “food hub” in the nation is set to break ground this year. The 24-acre, $50 million West Louisville FoodPort will not only provide access to fresh food for nearby residents, it’s expected to generate more than 300 jobs and provide workforce training in an effort to build up the local food economy.

FarmedHere, the largest indoor “vertical” farm in the country will serve as the anchor tenant with a new 60,000-square-foot facility, alongside many smaller businesses and non-profits, including food processors, distribution companies, retailers, restaurants, and educational organizations. With a two-acre demonstration farm and park-like space for hosting farmers markets, the site – which was designed by Dutch starchitect Rem Koolhaus’ firm, OMA – has been touted by Louisville’s municipal leaders as a catalyst for urban renewal< in this long-neglected neighborhood. Hopefully, it will serve the local citizens for a long time to come and not spawn the sort of gentrification that pushes the housing market out of reach for low-income families, which so often accompanies such trendy food-oriented developments.

[…] In the last few years, numerous projects to bring fresh food into food deserts have been created. Some of the more exciting ones include New York City’s Green Carts, local food coops, and grassroots food delivery and education projects. Now, bus stop farmers markets are emerging as a way to conveniently get fresh food to those living in food deserts. As Modern Farmer recently reported, […]