Infinite Harvest, an indoor vertical farm in Lakewood, Colorado, provides a glimpse into the future of global large-scale food production. 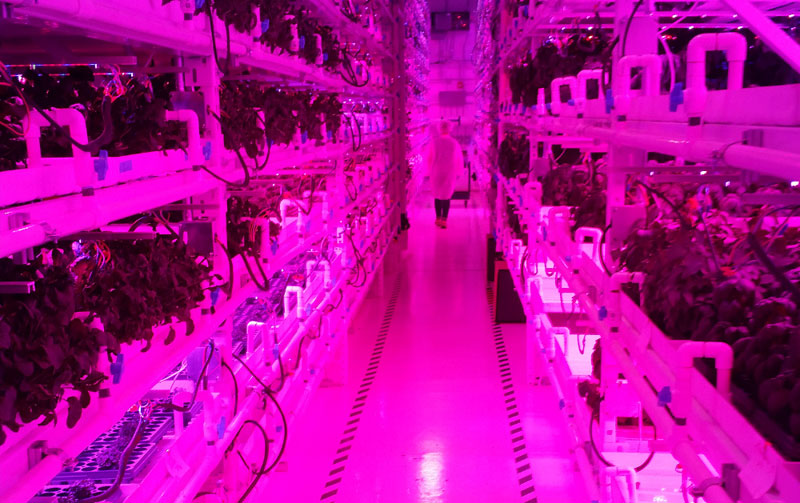 So, what do astronauts and arugula have in common? They both need the same things to live.

“Just like humans, plants need nutrients, vitamins, water at the right temperature, and sunlight,” Romano says. “I use my knowledge of controlled environments to maintain the optimum conditions for the plants at all times within the growing environment. We make sure all those parameters are in the right range so the plants can grow.”

Romano’s operation, Infinite Harvest uses similar technology and philosophies to those used on the space station – only on terra firma.

Unlike other vertical farms that use market-ready technology, Romano developed Infinite Harvest’s proprietary building management system from the ground up, using his knowledge of space habitat design. It controls all aspects of the air, water, and lighting systems. “Much like the International Space Station, we use and reuse as many things as possible to minimize waste and increase energy and water efficiencies. Recycling and regenerative systems are highly integrated into our design,” he says. “For example, the heat exhaust waste from one component in the system may be used to heat something else in the facility, rather than using a boiler to specifically create heat. This drives down the energy required and waste produced by the system.”

Just as every aspect of space-station operations are monitored closely by automated systems, so are Infinite Harvest’s leafy greens. “In space, if something starts to fail, or an emergency arises, the computer system will either alert the crew, take some autonomous corrective or safe-ing action, or both,” Romano explains. “Our building management system does the same thing, ensuring continuous operations so that the plants never stop growing.”

Just as every aspect of space-station operations are monitored closely by automated systems, so are Infinite Harvest’s leafy greens.

By now, you’ve probably heard about vertical farms and the many advantages this way of growing has over open farming. Vertical farming can be done all year long in urban environments with no lulls in food production. Floods, droughts, hail, and pests aren’t issues because everything about the plants’ environment – temperature, light, food, humidity, water – is meticulously controlled. Since there are no pests, there’s no need for pesticides and herbicides, and no harmful runoff. Perhaps most importantly, vertical farming requires a fraction of the arable land and water used in traditional farming – a key factor in Colorado, whose population continues to grow rapidly even as the West continues to experience mega-droughts”‹.

Not everyone is a fan of vertical farming, though. For thousands of years, farming meant getting down and dirty – literally. Some critics say vertical farming just isn’t the “real” thing.

“Many question the nutritional value of hydroponically-grown vegetables because there’s no dirt to provide the required nutrients or micro-organisms,” Romano says. “But just think how the soil nutrient content can vary from one corner of farmland to the other, or from day to day due to rain or water run-off. A controlled system is just that – a system that controls the amount of minerals and nutrients at the right time and amounts throughout the grow cycle of the crop. This gives hydroponic-based systems the potential to grow crops that have more nutrients than soil-based crops.” 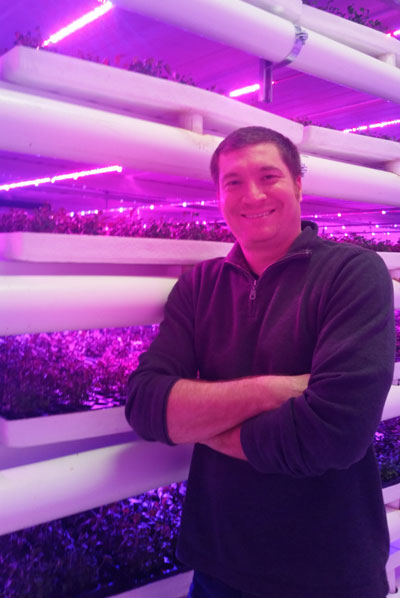 At Infinite Harvest’s 5,400 square-foot grow facility in Lakewood, Colorado, Romano oversees a team of ten greenhouse technicians who manage planting, harvesting, packing, and delivery. Baby kale, arugula, microgreens, and two varieties of basil (Thai and Genovese) grow in neatly-stacked trays that tower to the warehouse ceiling. A neon, pinkish-purple hue – LED lights designed by Romano – bathes the lush vegetation in other-wordly light. Roughly 160,000 plants, in various stages of development, are growing at any given time. Here in this completely man-made environment, plants may never see natural sunlight until they’re loaded onto a truck on delivery day.

So, where does all this food go? Romano’s clients include celebrity chefs, upscale eateries, and prominent restaurant groups. Infinite Harvest sells exclusively to mid and high-level restaurants in the Denver metro area, including Rioja (the flagship restaurant of James Beard award winner Jennifer Jasinski) and Beast + Bottle, owned by renowned chef Paul C. Reilly. Not only does indoor farming provide a steady supply of sustainable food for the Mile High City’s epicureans, it allows Romano to customize flavor profiles according to a chef’s specific request.

For example, young arugula is sweeter. But if you grow it longer and change certain growing conditions, such as light exposure and nutrient levels, it tastes more peppery. Restaurants want this variety according to which dish the produce will be used in, or simply due to the taste preference of the chef.

“I have to admit that at first I was a bit skeptical about vertical farming,” says Tim Kuklinski, Rioja’s chef de cuisine. “However, after tasting the products from Infinite Harvest, my skepticism washed away. I’m excited to get consistent and delicious greens year round while also supporting a Colorado business.”

Here in this completely man-made environment, plants may never see natural sunlight until they’re loaded onto a truck on delivery day.

Infinite Harvest has a 50-mile limit for delivery, but Romano says all his current clients are within half that distance. Rarely does his delivery team venture outside downtown Denver, and harvest-to-table time is measured in hours, not days or weeks.

Despite his set-up’s advantages, Romano admits it’s not without its share of difficulties. One: logistics, he says. Two: Market demand. Because Colorado has a short outdoor growing season, chefs have clamored for the opportunity to purchase Infinite Harvest’s produce since they began limited operations in March 2015.

“The response from the local market for our product was extremely high,” Romano says. That left some frustrated chefs waiting up to six months to receive their first orders. Romano secured a second round of funding from investors quickly after the company’s first harvest last March, which he used to complete construction a full year ahead of schedule.

Although Romano’s aerospace engineering background allows him to look at food production through a scientific lens, he is, first and foremost, a realist.

“Yes, vertical farming is different than the way the world has been growing crops for centuries,” Romano says. But as he points out, “people also said that Thomas Edison’s light bulb was not a true light source because it didn’t burn a wick and make smoke. The demand for sustainable local food is rising with the world’s population growth and shifting climates, and we need a more efficient and healthy way to grow our food. Vertical farming is one of the ways leading the food production revolution. That’s evolution.”

Looking forward, Romano plans to grow into an even larger facility in the Denver market. “Currently the industry is focused on green leafy crops because they are the easiest and fastest to grow,” he says. “Fruiting crops like tomatoes and strawberries present challenges, but they are not insurmountable in the vertical farm process. Going further, we believe that staple crops are also possible. We’ve successfully grown a test crop of sweet corn already, and there are others that are working on growing rice.”

Being in Colorado, Romano says he is often questioned about other, shall we say, herbal options when people see his setup – but he clarifies that there is one crop you won’t be seeing in Infinite Harvest’s rotation. “Marijuana is not our market,” he says. “Our business model is based on a broader base, because everybody needs food.”