Labor Gains: Tracing the History of the Fair-Food Movement

For decades, farmworkers in this country have been fighting for better pay and working conditions. A Florida organization is finally achieving both. 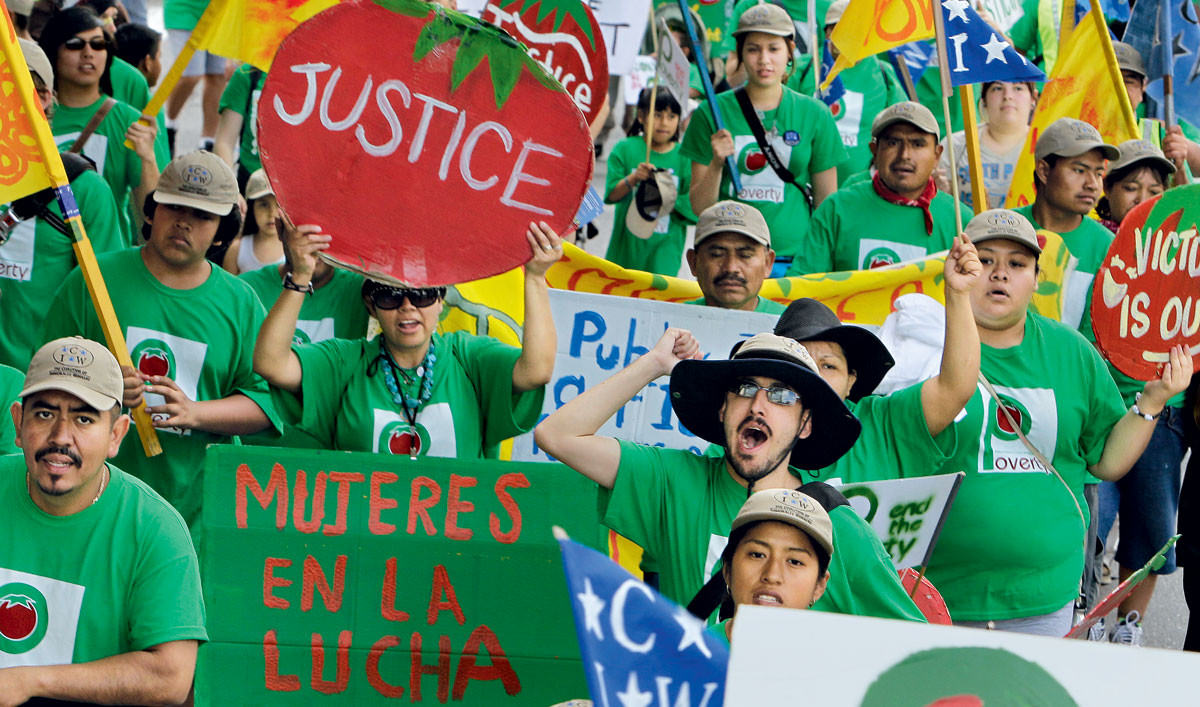 Long known for its harsh working conditions, Immokalee featured prominently in Edward R. Murrow’s iconic 1960 exposé, Harvest of Shame. Even in the 1980s, says Janice Fine, an associate professor of labor relations at Rutgers University, “it was the closest thing possible to hell on earth.” No one would have expected Immokalee to offer an answer to the age-old agricultural conundrum of how to balance the demand for cheap food with the need to treat farmworkers humanely. But that’s exactly the problem the town’s tomato pickers have solved.

The Immokalee that greeted de la Cruz was, she says, “kind of a wild place.” In the early 2000s, federal officials prosecuted 12 cases of modern slavery – defined by the U.S. State Department as forced or trafficked labor – in southwestern Florida’s fields. Workers who weren’t enslaved still faced extreme conditions. A lack of bathrooms forced pickers to relieve themselves in the fields. Women complained of sexual harassment by supervisors; everyone complained about the lack of shade structures in the 95° heat. The most consistent problem, though, was illegally low pay.

For every 32-pound bucket that de la Cruz filled, she earned 40 cents, the same rate workers earned in 1980. Most mornings she had to board a bus at six o’clock; her co-workers with children rose at four to drop their kids with sitters by five. Laborers often spent unpaid hours waiting for dew to dry before picking could begin, and occasionally didn’t return home until after dark. Some weeks de la Cruz was paid fairly, some weeks she wasn’t – a lack of formal records meant that it was her word against that of her crew leader.

Fairness in the Fields

Growers who sign on to the Coalition of Immokalee Workers' Fair Food Program agree to a Code of Conduct that ensures:

Workers will be paid while undergoing “Know Your Rights” training, which includes video tutorials and take-home booklets.

Workers can report potential violations of the code via a 24/7 complaint line answered by investigators at the Fair Food Standards Council (FFSC), which investigates within 48 hours.

FFSC may conduct audits, including interviews with workers and reviews of payroll records and timekeeping systems.

Immokalee’s tomato laborers began mobilizing in earnest during the mid-1990s, when a group calling itself the Coalition of Immokalee Workers (CIW) started staging marches and strikes. Sometimes the pickers would show up at a supervisor’s house and demand payment, says Lucas Benitez, one of the CIW’s founding members. But the industry didn’t change. The growers – the companies that owned the produce fields – said their hands were tied, because the grocery stores and restaurants they supplied would never pay higher prices.

Then, in 2001, some CIW members learned that Taco Bell had signed a big contract with a local tomato grower. The proverbial light bulb went off: It was the buyers, rather than the growers, who held the real power. What if, the group wondered, they could convince Taco Bell to insist on better working conditions for pickers?

CIW organizers banded together with a group of University of Florida students who’d helped with earlier initiatives. College campuses are a prime market for Taco Bell, and the franchise on the university’s grounds was particularly popular. Executives might not listen to the concerns of farmworkers, but they’d probably pay attention once a swath of prized customers complained. The group’s plan, called the Campaign for Fair Food, relied on a simple formula that made perfect sense to kids buying tacos: a penny per pound. If corporate buyers
agreed to pay that tiny premium, and the premium went toward wages, workers would, in effect, receive a nearly 80 percent raise. (See “The Power of a Penny,” below.)

The CIW began to identify possible corporate partners one by one, targeting a chosen company, mobilizing supporters, and slowly winning over the company in question. The first campaign, against Taco Bell, inspired students at more than 300 college campuses and 50 high schools – along with the National Council of Churches, which represented 50 million Christians – to urge customers to “Boot the Bell” until the chain responded to the CIW’s demands for better wages and working conditions. In 2005, Taco Bell and its parent company, Yum! Brands, agreed to pay the extra penny per pound. Two years later, McDonald’s did the same. Burger King, Subway, and Whole Foods Market followed suit in 2008. But it wasn’t until 2010, when the accumulated pressure persuaded Florida’s tomato growers to sign on to what the CIW named the Fair Food Program (FFP), that implementation of the bonus-pay scheme went into effect. Even more important than the money, says labor expert Fine, are the improvements in conditions on farms, abetted by the CIW’s unique Code of Conduct and regulatory body, the Fair Food Standards Council (FFSC). 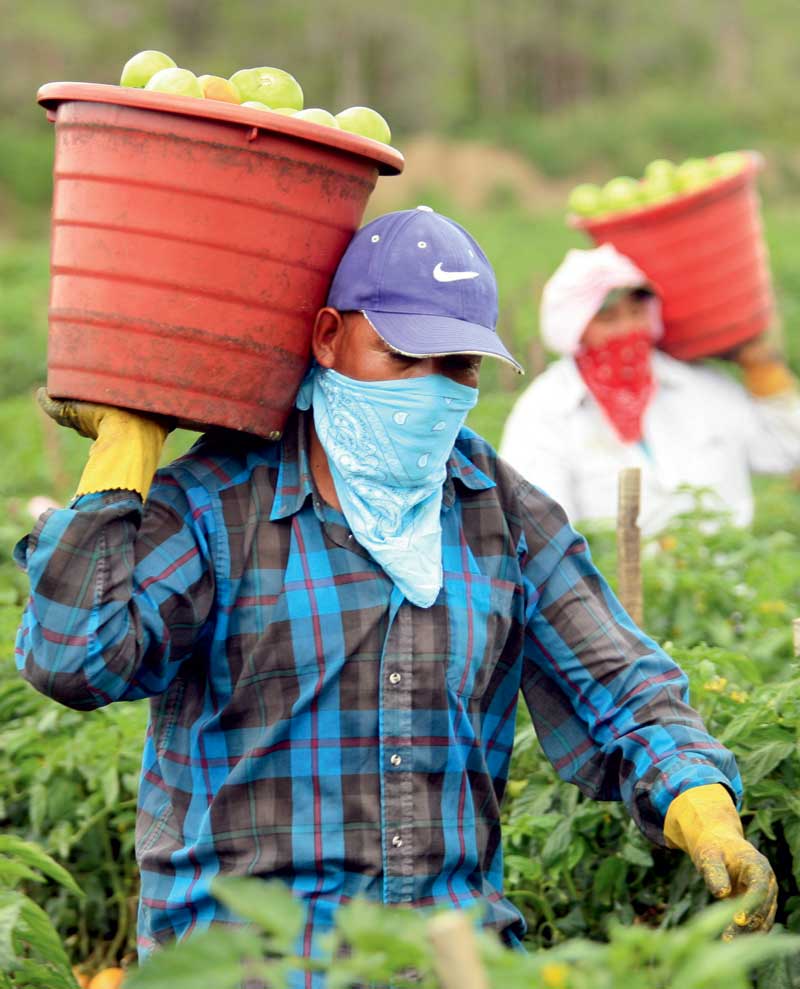 Tomato pickers labor in the fields of Taylor & Fulton Packing, which recently signed on to the Fair Food Program founded by the Coalition of Immokalee Workers. Lisa M. Alvarez / Associated Press

Operating somewhat like a DIY department of labor, health, and safety rolled into one, the FFSC educates workers on their rights in Fair Food fields – rights that are more far-reaching than those guaranteed by law. Workers must be hired directly instead of through contractors; they can’t be fired for complaining about conditions; and if a supervisor verbally or sexually harasses them, he or she can be fired. Growers are expected to comply with surprise inspections and implement electronic record keeping. They must pay tomato pickers for time spent waiting for work to begin, and provide clean drinking water and shaded areas. The FFSC also coordinates annual audits of participating growers; those who fail to correct identified problems are banned from selling to the FFP’s corporate partners.

“The logic of the program is really smart,” says Fine, because “it creates an incentive to do [the right thing], and a consequence if you don’t.” Signing on to the FFP has given grower Jon Esformes, co-CEO of Sunripe Certified Brands, a renewed confidence in his company’s ability to be a good employer. Just as Esformes follows food-safety regulations despite their cost, he says, he follows the FFP requirements, too. “When you’re talking about people’s safety, dignity, and basic human rights, that’s really non-negotiable.”

The companies that growers like Esformes sell to appreciate the CIW’s depth of expertise. Says Matt Rogers, a buyer for Whole Foods: “A third-party transparency standard is incredibly helpful for our purchasing because it ensures responsible sourcing. And the cost can be nominal.”

The CIW marked its biggest successes when two of the world’s largest supermarkets, Walmart and Ahold, joined the program in 2014 and 2015, guaranteeing higher wages for the 30,000 workers in their combined supply chains. (The CIW recently broadened its work to tomato pickers in six additional states.) To date, nearly $20 million has been collected in premium payments and passed on to field-workers throughout the United States. Campaigns aimed at the supermarket Publix and fast-food chain Wendy’s are ongoing.

The FFP continues to expand. Last year a Fair Food label was introduced, which lets shoppers know at the time of purchase whether their tomatoes have been picked under fair conditions. The CIW expects to add bell peppers to its certification scheme this season. In the meantime, the organization is helping workers in Vermont build an initiative similar to the FFP for dairies, and sharing the CIW model for “worker-driven social responsibility” with farmers and farmworkers abroad. The Immokalee group has strategized with activists from Ghana, Brazil, and India; discussed campaigns with Moroccan and Chilean growers; and consulted with Mexican farm laborers in Baja California.

“It really is a massive advancement for thousands of workers,” says early organizer Benitez. “This has huge implications.” De la Cruz, for her part, is grateful for the smaller gains. The increase in wages is great, she says, but so are the ways her work life and that of her co-workers has become less stressful. “My friends with kids can walk them to school and then go to work,” she says. “It’s an incredibly beautiful thing.”

The Power of a Penny 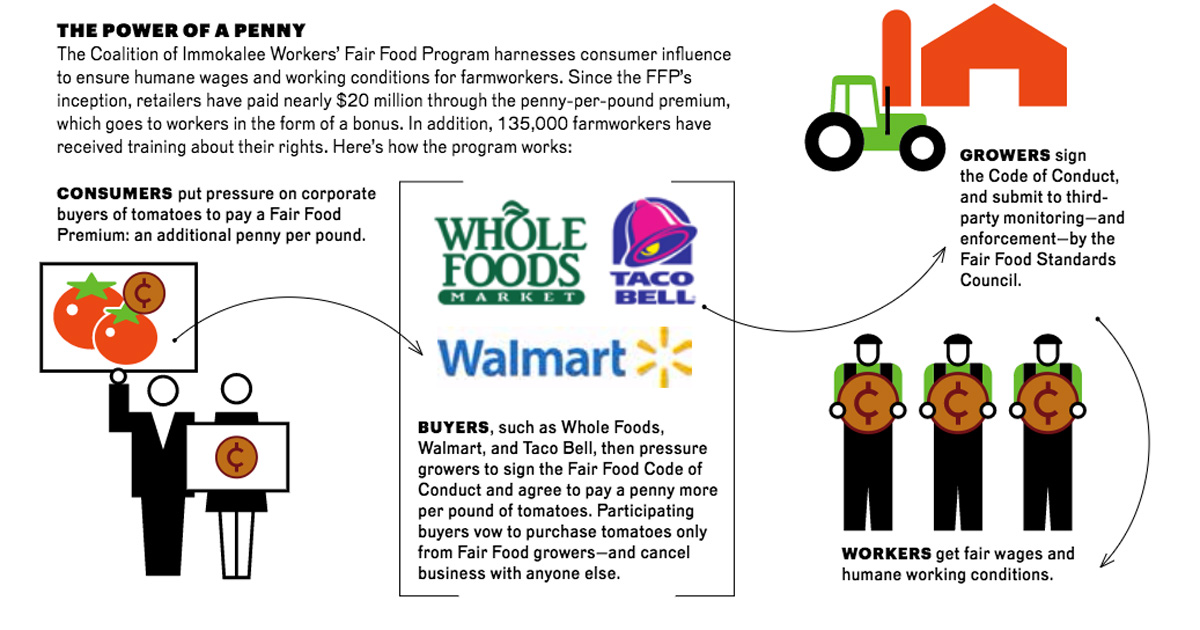 Tracie McMillan is the Brooklyn-based author of The American Way of Eating (Scribner).