As the old tradition of Irish moss gathering wanes, a new farm-based market for seaweed may revive it. 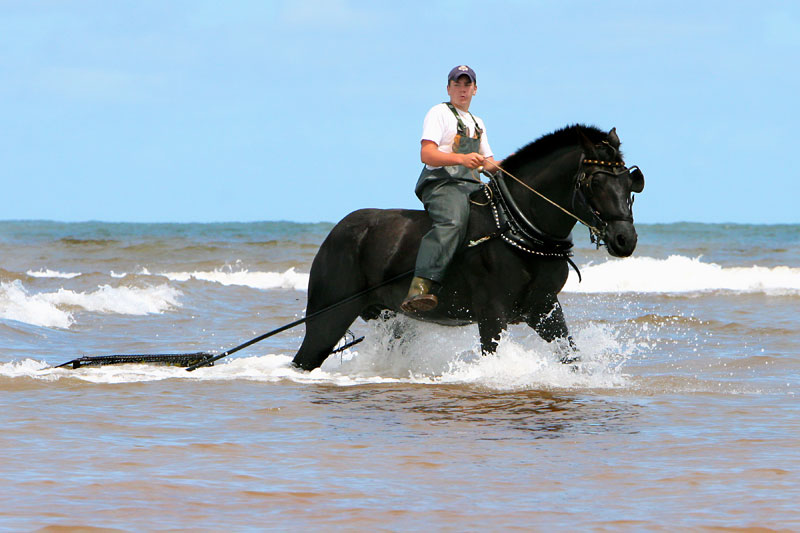 My family liked to go to out-of-the-way places each year for summer vacation, and in the summer of 1990, we chose Prince Edward Island (PEI), a small Canadian province in the North Atlantic. Our plan was to camp on the beach at the remote western end of the island near an old fishing village called Tignish. We got in at dusk after a long day of driving in the rain, and the next morning as I opened the flap of my tent and rubbed the sleep from my eyes, I took in a strange sight: The biggest horses I’d ever seen were prancing around in the surf.

After talking with some locals at the campground, we learned that this was a completely ordinary event in this part of PEI. The horses were pulling giant rakes to harvest seaweed, a cash crop that supplements the fishermen’s income each summer between the spring and fall lobstering seasons. Dulse, kombu, wakame, and other seaweeds sold as health snacks are harvested throughout the North Atlantic, but PEI fishermen have traditionally harvested Irish moss, a short red seaweed that is not typically consumed on its own, but used to make the industrial food additive, carrageenan. Summer storms wash the Irish moss ashore where it is scooped up by the ton from the intertidal zone and then sold to processors who extract a gel-like substance from it, which is used in products ranging from pudding and soy milk to beer and toothpaste.

Or at least Irish moss was harvested for that purpose back when I was 12 years old. The practice began in the 1930s and at the peak of production in the 1970s, the annual Irish moss harvest pumped nearly $6 million into the local economy of this sparsely populated area – but this summer the industry was declared all but dead, thanks to an invasive seaweed that’s taken over the Irish moss beds.

However, at least one PEI seaweed company is looking to reverse the decline by shifting the focus from supplying carrageenan processors to supplying farmers with nutrients for their fields and livestock. Joe Dorgan, who grew up harvesting Irish moss by horse on the beaches around Tignish, says Irish moss has very specific traits that make it suitable for carrageenan production, but when it comes to agricultural applications, all seaweeds are more or less equal. His company, North Atlantic Organics, now in its tenth year, harvests about 1 million pounds of seaweed (four different types, including Irish moss) annually from PEI beaches, which is dried and ground into certified organic seaweed meal.

“All my life I’ve been at the Irish moss,” says Dorgan, 60, in the salty Irish dialect that is still occasionally heard in parts of Atlantic Canada. “We all grew up right here on the beach. Back then, there used to be a lot of real good Irish moss, but over the years the Irish moss got overtaken by the other weeds in the ocean and there is really no Irish moss left. It’s not feasible to be at the Irish moss anymore.”

Unlike the fishermen moss gatherers of his community, Dorgan says he comes from a family of farmers who have long known of the benefits of seaweed to both soil and animal health. “When we were kids anything that didn’t make good for Irish moss, our dad had us hauling it off of the beach to grow his potatoes. It’s good fertilizer, it’s good animal feed, it’s good for people, it’s good for everything.” 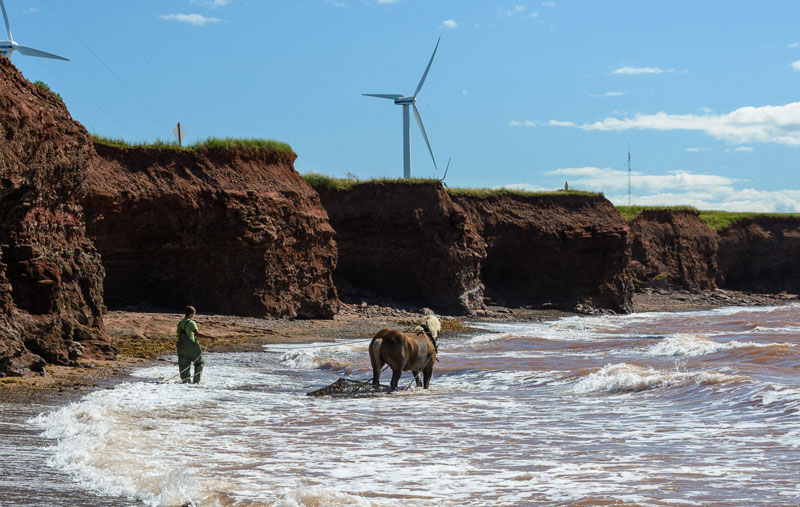 I asked Dorgan what I thought was an obvious question: Why horses? When the tradition started on PEI in the 1930s, draft horses were still commonly used in agriculture, so it makes sense that their strength would be harnessed to pull heavy clumps of seaweed ashore. But surely a more efficient mechanized approach would have been devised by the time the industry hit its peak in the ’70ss. Dorgan’s answer wasn’t particularly scientific: “The horses don’t mind the water, and they’re good workers, and that’s just been the way it was,” he says. “Our ancestors done it that way and it’s still done that way today.”

I suspect that the problems associated with using motorized machinery in saltwater, like accelerated rust and corrosion, may have been a practical obstacle. But perhaps the industry was never big enough to warrant R&D investment anyways – a $6 million industry can hardly be called an industry.

I pried Dorgan with another quandary. Coastal communities around the world have harvested Irish moss (and other seaweed species from which carrageenan can be made) for centuries, none of which use draft horses for the work. Its harvest is especially prevalent in Irish culture – the Irish delicacy blancmange is made from seaweed blended with milk and sugar into a pudding, and the word carrageenan is old Irish for “moss of the rocks” – but Dorgan says even his Irish ancestors didn’t use horses to harvest it. His reply is that in other places Irish moss is harvested straight from the rocks where it grows – only on PEI is it scooped up en masse after storms dislodge it from the rocks. “Storm-tossed moss” he calls it. Seems like other harvesters of sea moss would want to harvest it “storm-tossed” as well, but I let it go.

It’s clear, however, that “harvest by horse” has a certain marketing charm. A recent video of one of Dorgan’s relatives riding a horse up to its neck in crashing surf went semi-viral on social media. North Atlantic Organics product labels feature an image of a horse in the water, a nice branding touch that surely appeals to a target audience of organic farmers. (Dorgan says Amish farmers in the US comprise a large portion of his client base.) As the many draft-powered organic farms found throughout North America indicate, there is a niche market for those who employ animal power, rather than diesel-slurping, smog-belching machinery. 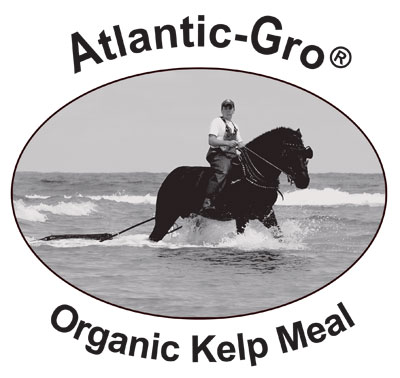 The low-tech, all-natural appeal of draft horses is more than just a marketing ploy for Dorgan. He is a farmer who knows the pains of industrial agriculture firsthand. “I was a dairy farmer and a potato farmer, but it was all big business,” he says. “I got tired of working for machinery dealers and banks. So I turned my dairy into an organic dairy farm. I needed a source of fertilizer and a source of vitamins and minerals for my cattle, so I went to seaweed because I knew it was good, it’s natural and it’s right here.”

Demand for carrageenan by the burgeoning industrial food industry of the 1930s may be what sparked PEI fishermen to lay down their nets and saddle up to collect seaweed, but consumer hunger for food products with a smaller carbon footprint (and a clean, wholesome image) may be what preserves the tradition. If so, it will certainly be an economic boon for this tiny little tip of a tiny island province.

Dorgan just built a new million-dollar facility and is scaling up his operation. He says he already supports more than 100 harvesters and would like to see the seaweed industry on PEI return to its former glory. “It provided for an awful lot of people,” he says. “We’re in an area where there is not a lot of things going on. There’s not a lot of farming goes on here anymore. There is only a bit of lobster fishing and what we’re doing. There’s a lot of very poor people, so we’re trying to do our part.”

Where can we go to see the horses harvesting seaweed on the shores of PEI?