The Price of Climate Change-Related Disasters on Agriculture Is Astronomical

A new UN study finds the cost of climate-change related disasters have cost the world $1.5 trillion, with agriculture bearing the brunt. 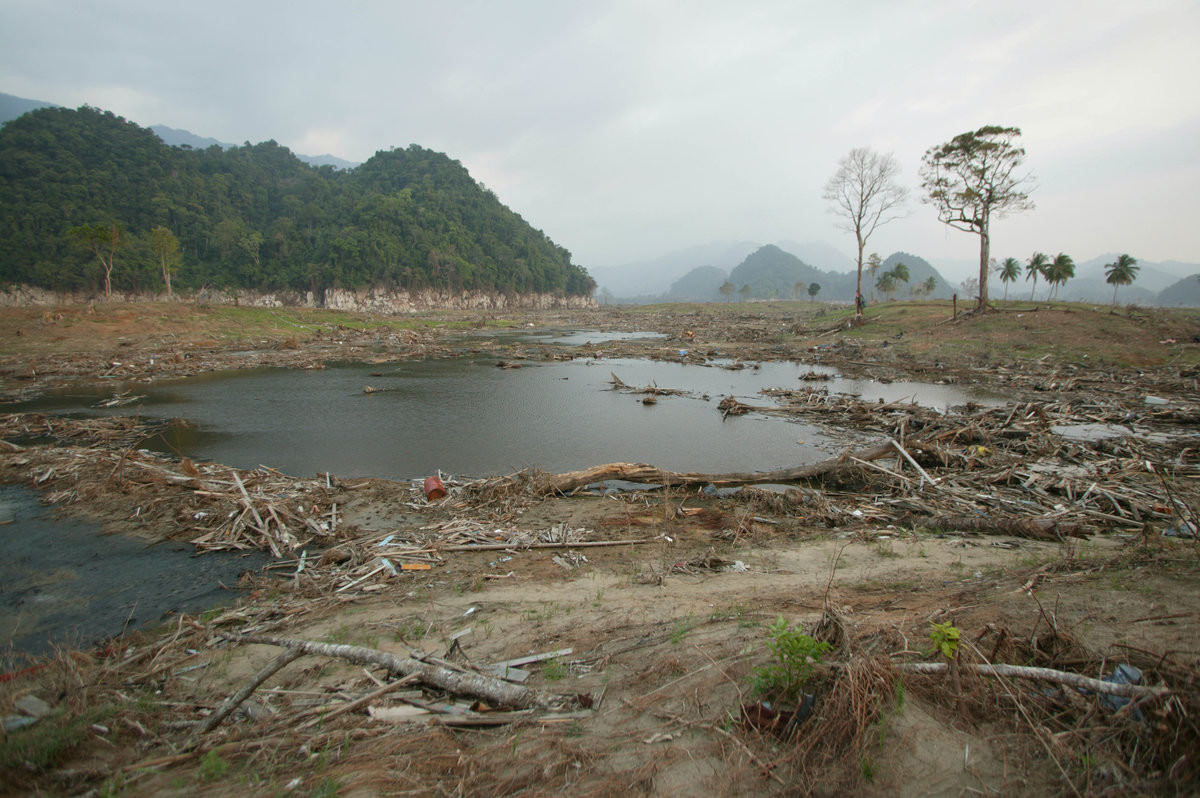 A view of mass destruction caused by a tsunami. The destruction includes homes and agricultural land along the road heading south on the west coast of Aceh near Leupung, Indonesia on Feb. 16, 2005.
Photography Photographer: ©FAO/Jim Holmes
Share
Tweet
Pin
Email
159 Shares

The 53-page report, titled “The impact of disasters on agriculture and food security,” focuses on climate-related disasters in developing countries and finds that the agriculture sector – and thus food security – suffers the most. In general, crop, livestock, fisheries, and forestry bear 25 percent of the negative impacts from such disasters as droughts, floods, and tropical storms. In the case of droughts, more than 80 percent of damage and losses are borne by crop and livestock producers.

According to Stephan Baas, the FAO’s natural resources officer, it’s likely the global figures are higher than what was presented in this study since it solely focused on medium to large-scale disasters in Africa, Asia, the Pacific, Central America, and the Caribbean.

“The overall impacts are likely to be much higher, especially when including impacts of small-scale events as well,” Baas tells Modern Farmer in an email.

The FAO report is based on a review of 78 post-disaster needs-assessments conducted in developing countries as well as a statistical analysis of production losses, changes in trade flow, and agricultural sector growth connected with 140 medium- to large-scale disasters (those affecting at least 250,000 people). Among those included are the Indonesian Tsunami of 2004, which caused $860 million in agricultural losses; a series of droughts in Kenya from 2008 to 2011, with a loss of $10.5 billion; and flooding in Pakistan in 2010, with associated losses of $5.3 billion. 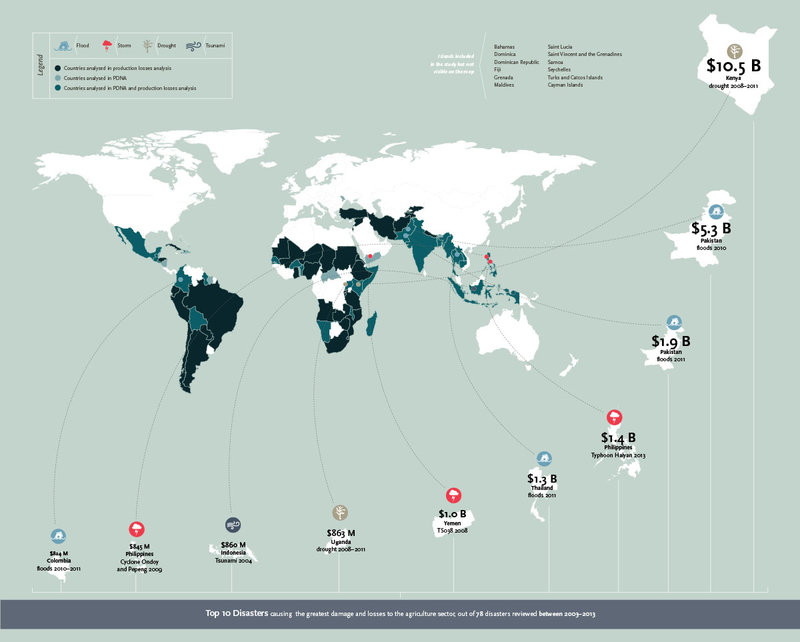 The top 10 disasters that caused the greatest damage and losses to the agriculture sectors out of 78 disasters that took place between 2003 and 2013 that were reviewed for the study. ©FAO

Baas says the report finds that the economic damage from climate-related disasters goes beyond losses of crops and farming equipment; it also includes the loss of facilities used for storage and processing, transportation, and even the government agencies that oversee agriculture. He cites the 2010 floods in Pakistan, which caused about $5 billion in damage, as an example. In that case, besides the 2.4 million hectares of unharvested crops (mostly cotton, rice, sugarcane, and vegetables) that were lost due to flooding, there were also negative impacts on cotton ginning, rice processing, and flour and sugar milling, among others.

“The floods caused a decline in both agriculture growth and overall Gross Domestic Product (GDP) growth. Livelihoods, food security, and nutrition were also strongly impacted: More than two-third of Pakistani farmers lost 50 percent of their expected income, and almost one-third of the population had poor consumption intake,” says Baas.

The data indicates a correlation between climate change and the increase in climate-related disasters such as floods, droughts, and storms.

A link is very likely between these disasters and climate change, according to Baas. The data indicates a correlation between climate change and the increase in climate-related disasters such as floods, droughts, and storms. But, at this point, the researchers still can’t say that climate is the only driver of enhanced risk; nor what additional percentage of an impact climate change plays in the severity and frequency of natural hazards. The Intergovernmental Panel on Climate Change, an international body for the assessment of climate change formed by the UN in 1988, is still working on that answer.

What we do know for certain is that these disasters have a direct impact on agricultural livelihoods, food security, and nutrition. Disasters can cause either unemployment or a decline in wages and income for farm laborers and lower the availability of food in local markets leading to inflation of food prices.

“Such pressures reduce the purchasing capacity of households, restrict access to food, deplete savings, force the sale of vital productive assets, increase indebtedness, and erode livelihoods,” Baas says. “Such negative cascading effects often lead to an increase in food insecurity and malnutrition, particularly among the most vulnerable households.”

There are also negative cascading effects along the value chain that can lead to additional costs for governments, including increased imports of food and agricultural commodities; reduced exports and revenues; and a reduction in manufacturing and industrial output in sectors that depend on agriculture and raw materials, such as food processing and textile industries. 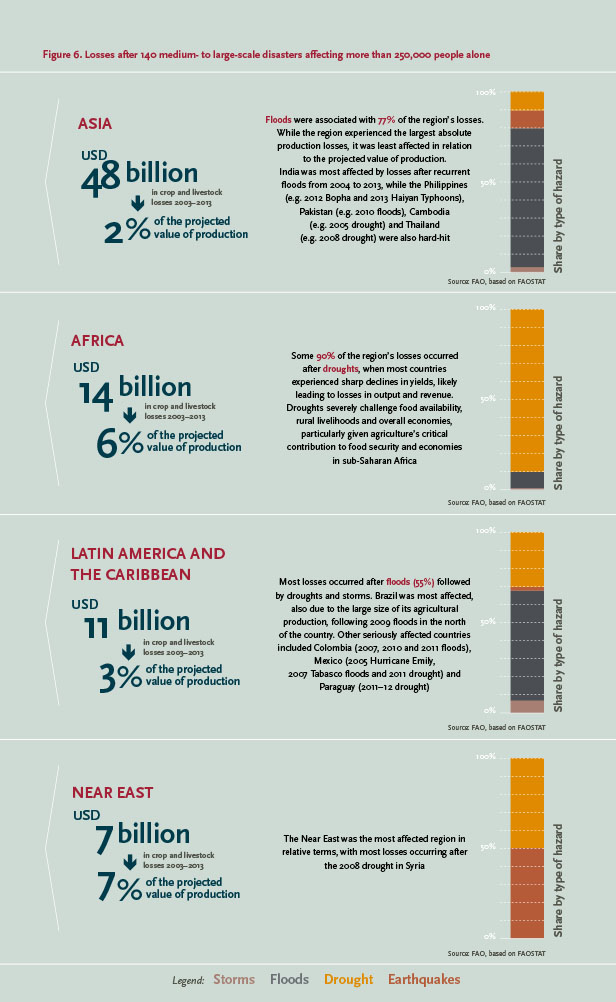 This study assesses the impact of medium to large scale natural hazards and disasters on the agriculture sector and sub-sectors. ©FAO

The report was strategically released to coincide with the climate-change conference in Paris, which runs until December 11. The FAO believes that agriculture, food security, and nutrition are still not yet prominent enough in the climate-change talks, according to Baas.

Worldwide, the agriculture sector, while being hit the hardest by natural disasters, receives only a small portion of the total post-disaster humanitarian aid that finds its way to developing countries. Between 2003 and 2013, about $121 billion was spent on humanitarian assistance for all types of disasters and crises, with just 3.4 percent going to the agriculture sector, averaging about $374 million annually. Additionally, in certain parts of the world, notably Africa, governments aren’t investing enough in agriculture in general, according to the report.

“The main intention of the study was exactly to raise awareness is of what is at stake if we do not proactively put approaches and mechanisms in place to mitigate the impact of disasters on agriculture.”

“The situation simply reflects the priority setting in funding over the past two decades during which funding to agriculture went down significantly. This has to be reversed,” Baas says. “Currently 2.5 billion people worldwide depend on agriculture as the main source of their livelihoods. The main intention of the study was exactly to raise awareness is of what is at stake if we do not proactively put approaches and mechanisms in place to mitigate the impact of disasters on agriculture.”

While the FAO report gives us a good look at the issue of climate-related natural disasters 0n agriculture, there still needs to be more reporting in order to fully understand the problem. One big issue: There’s currently no standardized international system in place to monitor and report on how farming is affected by natural disasters, making it harder to assess associated needs.

“Systematic reporting is crucial to support the monitoring of progress towards the achievement of global and national goals and targets on disaster risk reduction and resilience,” Baas says. “In order to meet these challenges and as part of the Organization’s commitment to resilience, FAO is ready to support efforts to further improve monitoring and reporting of disaster impact on the agriculture sector.”

Here’s Dominique Burgeon, director of FAO’s Emergency and Rehabilitation Division, giving some of the report’s highlights: