Meet Stan Herd, the Man Who Turns Agriculture into Amazing Works of Art

Growing up in the rural town of Protection, Kansas, Stan Herd dreamed of leaving his family’s farm that was homesteaded by his grandfather to lead the life of an artist. But his agrarian roots ended up emerging in his art in the most spectacular of ways. 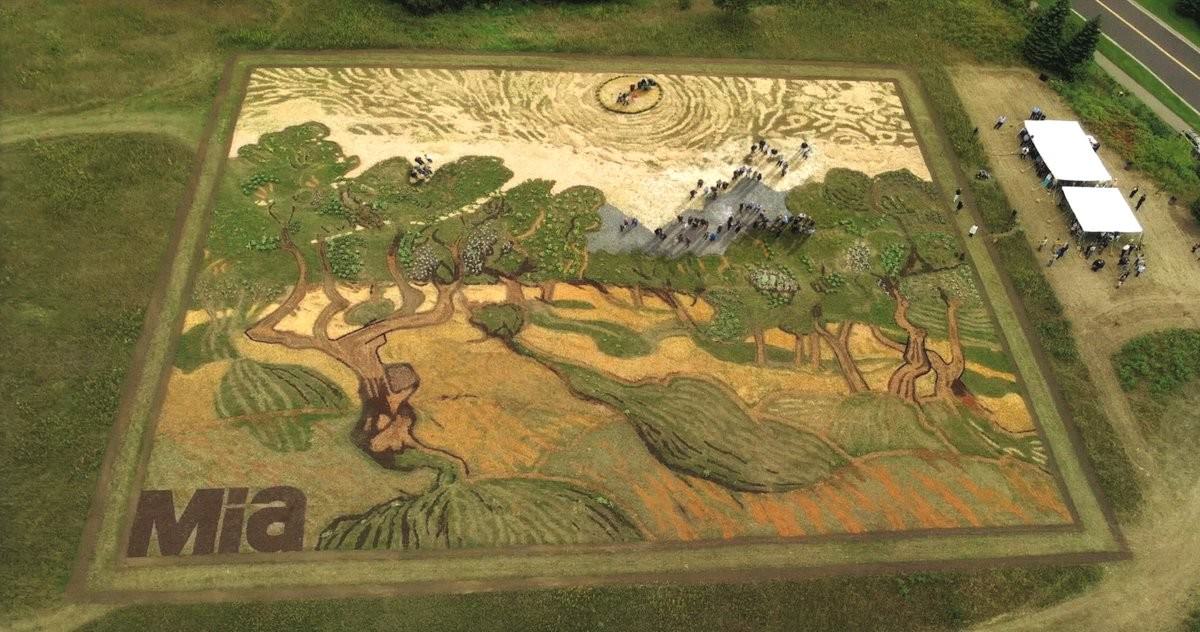 Over the course of more than 30 years, Herd has created about three dozen monumental earthworks, beginning with a 160-acre portrait of Kiowa Indian Chief Satanta in 1981, to his latest, a massive reproduction of Vincent Van Gogh’s “Olive Trees,” which the famed Dutch artist painted in 1889. Herd’s version – commissioned by the Minneapolis Institute of Art and officially revealed in September – was made from native plants, gourds, oats, and other various natural materials in a 1.2-acre field in Eagan, Minnesota.

Herd is indebted to his childhood spent on the farm, not just for his “strong values” and “Democratic ideals,” but for the way in which his art manifested. He says his parents were supportive of his art from the beginning and he feels “they were part of my art” since he “ended up creating works on the land that paid homage to people” who made their living from the earth.

“I have gravitated to the idea that the earthworks need to be more than just something to look at…that the background story of mankind’s relationship to the earth, in agriculture, and in stewardship of pristine nature, is what the act of creating the work is about.”

“I think mainly it was a result of spending my early life on a tractor and on heavy equipment and my interest in Christo‘s massive works,” Herd says of how he started making his monumental art pieces. Each project begins life on paper before the land is surveyed, gridded out with flags, and measured. From there, Herd begins removing grass, plants, and earth with various equipment before he decides what crops to plant. Flights over the land give him an idea of his progress and inform his next decisions. Some works are created in a week, some take a year, and most disappear seasonally or after the farmer returns it to production, says Herd, but there are a few that are permanent.

Over the years Herd’s been able to push the boundaries of his work, he says, becoming more experimental in his choices of what to plant and the work to create. The deeper idea behind what he does has developed over time, too.

“I have gravitated to the idea that the earthworks need to be more than just something to look at…that the background story of mankind’s relationship to the earth, in agriculture, and in stewardship of pristine nature, is what the act of creating the work is about,” he says. The works also “evolve with community and a larger group of people who all take something away from the time spent together.”

The logistical problems he faces hark back to his farm days as well. Weather is always a big issue, as is whether the crops he chooses to use will produce satisfactorily. Then there’s the problems of money and time – issues any farmer can relate to.

“At 65 I only have a limited amount of time to create these massive works. I am reminded that I need to choose my work carefully,” says Herd. The artist is trying to get funding for his next project, “Young Woman of Brazil,” a permanent earthwork/garden in São Paulo, Brazil, on which he’s spent the last three years working. 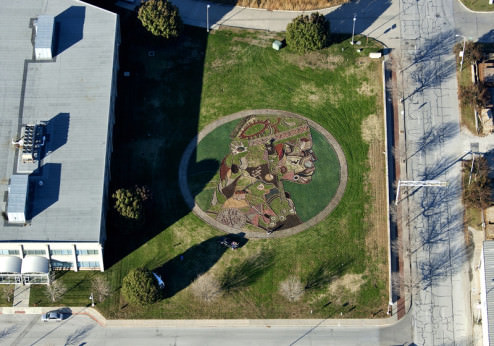 “I want to see if an image of this sort can add something to the community for the long run,” he says. “All art doesn’t have to have a utilitarian purpose, but at their best, I believe my earthworks do.”

Take a look at the video below, which profiles Herd’s fascinating process to create the Van Gogh piece.

Stan Herd, Of Us and Art: The 100 Videos Project, Episode 30 from Minneapolis Institute of Art on Vimeo.