What Is Black Rice, and Where Did It Come From? - Modern Farmer
Food & Drink

What Is Black Rice, and Where Did It Come From?

A new study examines the genome to try to track this sinister-sounding rice back to its source. 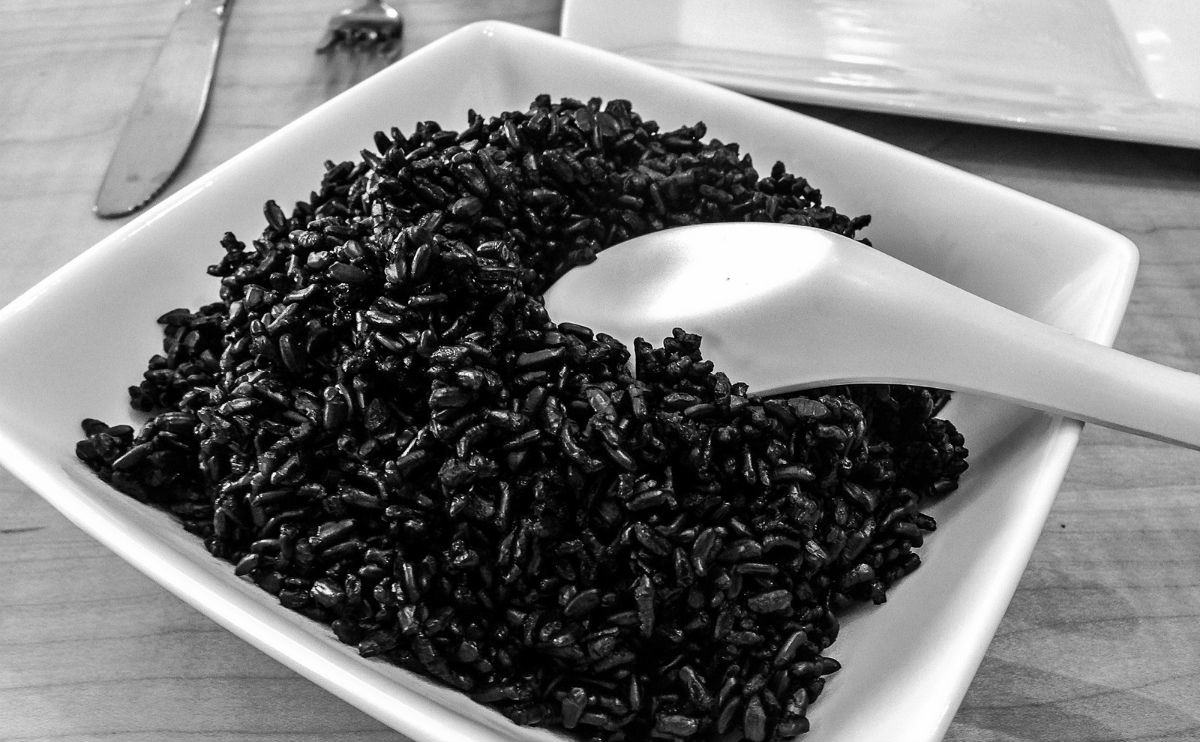 So! Cultivated rice (as opposed to wild rice), all originates, according to genetic research, from a single crop in China somewhere around 10,000 years ago. From that one batch, the two species of rice (one generally referred to as Asian rice, the other as African rice) spun out into hundreds of different cultivars. These differ in plenty of ways; some are long grain, some short; some have high levels of amylopectin, which makes them very sticky when cooked (these types are called glutinous rice); some are pink or red or brown or, yes, black. (The difference between brown and white rice is due to processing, not to varietal.)

Black rice is a particularly odd duck; its deep, dark color, which is something like a purplish black, is a rarity in the food world. Black rice comes in a few different forms; often it’s a glutinous variety, but there are black jasmine rice varieties as well. That dark color is due to an excess of anthocyanin, a powerful antioxidant that’s the culprit for most darkly colored plants. Dark purple eggplant? Anthocyanin. Same with blueberries, aÁ§aÁ­ berries, and concord grapes, along with the colored versions of normally paler plants like purple cauliflower, purple corn, and blood oranges.

Black rice has a spectacularly high level of anthocyanin, which might be why it’s revered in, for example, China as an extremely healthy food. It also is fairly tricky to grow, at least in terms of yield, which is often as low as 10 percent of other rice varieties. It’s occasionally called “emperor’s rice” or “forbidden rice” for that very reason: Oral history suggests that only the richest of the rich were able to afford the delicacy.

A new study, led by Japanese researchers, analyzed the genome of 21 black rice varieties (as well as some similar white and red rice types, for comparison) to try to find out more about how some rice ended up black, and why. They found that black rice all originates from Japanese rice, and found the specific gene that has gone haywire in black rice, triggering the plant to produce large amounts of anthocyanin. The theory is now that black rice is naturally occurring, but only as a mutation, and that it was kept and made into a reliable source by humans crossbreeding black rice mutants to produce more.

Black rice can be found in most larger gourmet supermarkets these days: Whole Foods and Trader Joe’s are pretty likely to stock it. And it’s delicious; it has a sort of earthy, nutty flavor like a more intense brown rice, but the texture is closer to white, especially in the glutinous varieties. It’ll also turn the water you cook it in a deep, lovely purple, which is fun. Go try it!

Good article but why do you say, “sinister-sounding”? Is it sinister b/c it’s black?
Quite the contrary it sounds healthy, rich, nutrient dense, powerful. ETC.

Black rice is known as chak-hao in Manipur.
In India, it is mainly grown and consumed in Manipur.

You’re an inspiration to us foodies. Love your website!

I am interested to receive black rice seeds and China sticky rice seeds . How can i get
those in Bangladesh from China .
I great full to you if give advice .

Thanks for the info on black rice! It was very helpful ??

Very useful article. Thanks a lot.