The War on School Lunch 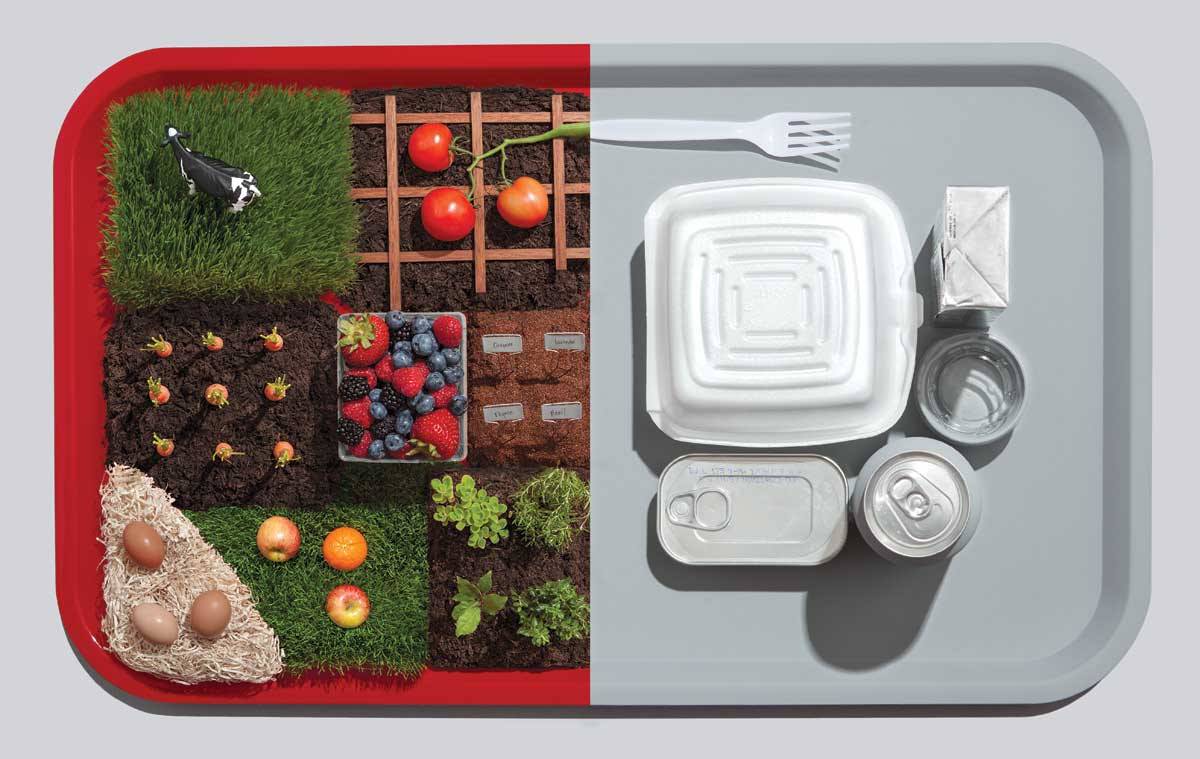 Five days a week, weather permitting, the students at Reed Elementary, in Tiburon, California, sit down to lunch at picnic tables in a courtyard abutting the public school’s athletic fields. On the menu: roast chicken with organic potatoes and local zucchini, gluten-free pasta with fresh pesto sauce, and pesticide-free peaches, apples, and nectarines – all served on compostable dishware.

Would that all our kids had it so good. Unlike at Reed, however, where the parents kick in $6 a day for meals, most American public schools rely on the National School Lunch Program. In 2014, it provided five billion lunches to 30 million children. The federal government shelled out $11.6 billion to make that happen. Feeding our children, in other words, is big business. And while food crusaders like First Lady Michelle Obama and the Edible Schoolyard’s Alice Waters may have one agenda, the major corporations vying to get their products onto cafeteria trays have altogether different interests. Factor in the political sway of the multibillion-dollar food industry (and of the dairy, corn, poultry, and other lobbies with which it works), and you begin to understand just how complicated the simple act of nourishing students has become.

Roughly 15 percent of districts in the National School Lunch Program outsource their operations to for-profit vendors. But the multinationals that dominate the field (and also serve hospitals and prisons) tend to be better known for legal troubles than lasagnas. Two such companies were sued for mismanaging funds: Sodexo was ordered to pay the New York City school system $20 million in 2010; Chartwells, a subsidiary of the Compass Group, wrote a $19.4 million check to the Washington, D.C., system earlier this year.

Oakland-based Revolution Foods, founded by Kristin Groos Richmond and Kirsten Saenz Tobey, offers a more benevolent model. Its school lunches, prepared daily at a network of culinary centers, are free of hormones, high-fructose corn syrup, and artificial flavorings. By partnering with suppliers that offer discounts on raw ingredients, the nine-year-old company is able to keep meal costs just pennies above the $2.93 per tray paid by the government. Clearly Richmond and Tobey are doing something right: Today Revolution Foods is an $80 million company, delivering more than one million meals a week to 200,000 students across the country…and not a lawsuit in sight.

The U.S. government began subsidizing school lunch programs in the 1930s, as a way to help struggling Depression-era farmers unload excess crops, while also feeding kids at a time when malnutrition was a national health crisis. These excess crops (“commodity foods”) were given to schools, where they were cooked by cafeteria workers on-site. In 1946, the National School Lunch Act mandated that the meals also meet specific nutritional requirements. And, for several decades, schools across the country churned out freshly prepared lunches based on recipes distributed by the United States Department of Agriculture (USDA). (In some cases, home-economics teachers or staff cooks developed the dishes.)

Then the 1980s ushered in an era of cost cutting and efficiency, and public schools began phasing out their kitchens in favor of units designed to heat premade meals unpacked from boxes. Though the USDA still spends some $1 billion a year on such commodities as apples, cheese, potatoes, and chicken, most schools now pay outside processors like Tyson Foods to transform those raw ingredients into chicken nuggets, french fries, and fruit pastries. Nearly a fifth of public schools go one step further – outsourcing their food services entirely to conglomerates such as Sodexo and the Compass Group. (See “Milking the System,” right.)

At the same time, the prevailing health issue in this country has shifted from hunger to obesity. Since the 2010 reauthorization of the Child Nutrition Act, known as the Healthy, Hunger-Free Kids Act (HHFKA), lunches, breakfasts, and snacks sold on school grounds have fewer calories; contain less salt, sugar, fat, and white flour; and include more fruits and vegetables. The HHFKA, which draws on recommendations from the nonprofit Institute of Medicine, will become even more ambitious over the next seven years.

Though the HHFKA passed with bipartisan support, its reauthorization, set for this September, is turning out to be a far more contentious affair. In the run-up to the 2016 presidential election, for instance, Republican politicians have begun laying into the signature Obama achievement. During Congressional hearings in June, John Kline, a Republican from Minnesota, took issue with the HHFKA’s calorie caps. (Agriculture Secretary Tom Vilsack, defending the reforms, pointed out that school lunches had only 25 fewer calories than they’d had before the regulations, adding drily, “This is not an all-you-can-eat at Applebee’s.”)

The School Nutrition Association (SNA), whose 56,000 members work in the kitchen or behind the cash register, has been particularly outspoken in its dissent. The so-called lunch ladies hope to use reauthorization to roll back many of the HHFKA’s 2010 reforms. In the name of “flexibility” – no one openly demands more junk food – the SNA is asking Congress to relax limits on sodium and white flour. The group wants more latitude regarding snacks, which earn big revenues for schools, and it hopes to drop the rule requiring that students take a fruit or vegetable, arguing that this generates waste. (See below.) 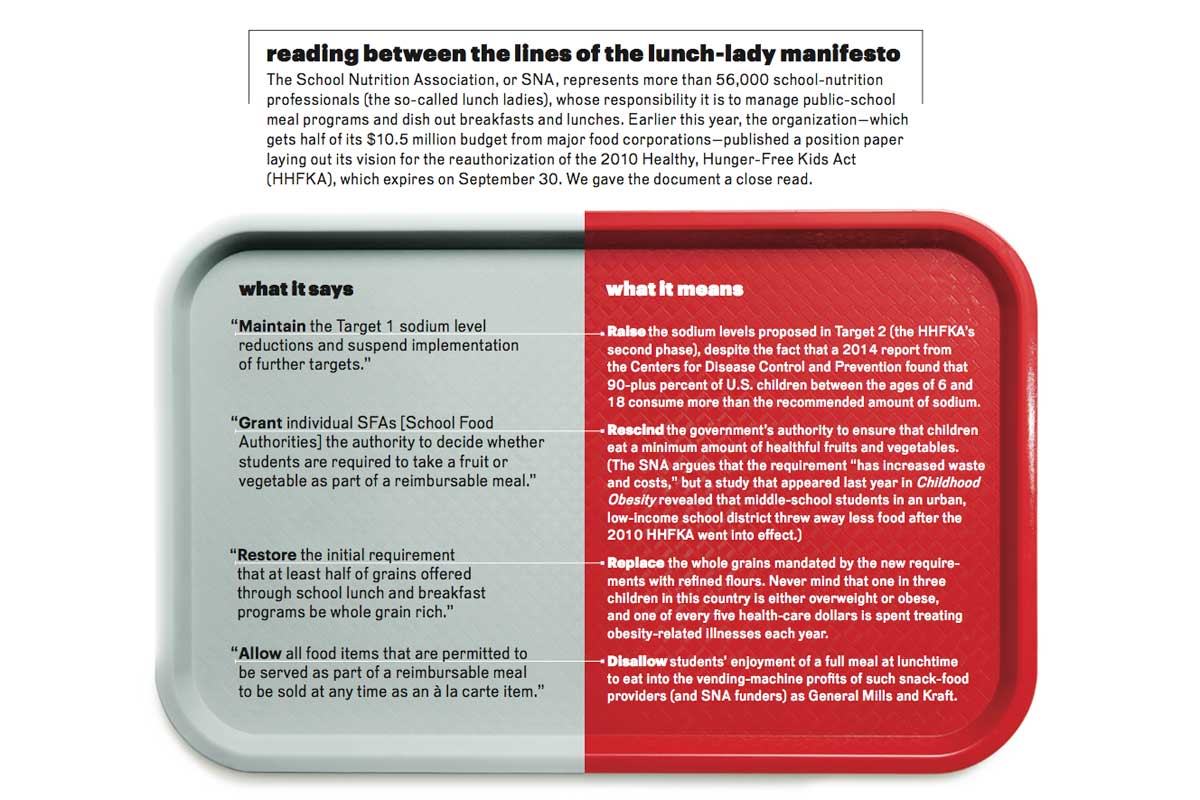 “I am deeply unsympathetic to their argument,” says Marion Nestle, a professor of nutrition, public health, and food studies at New York University. The SNA’s requests for more salt and less whole wheat, she argues, open the door to better-tasting processed foods, which translates into bigger revenues for the supporters of the SNA. Fully half of the organization’s $10.5 million budget comes from Big Food, including such companies as General Mills, Domino’s, and Tyson. (General Mills has also donated $80,000 to Congressman Kline’s war chest since his first run for the House in 2003.) Overall, agribusiness gave more than $48 million to Republicans and more than $16 million to Democrats in the last election cycle. Sodexo alone spent more than $1.1 million lobbying Congress in 2010, much of it related to the HHFKA.

Bringing the Farm to School

In addition to new dietary standards, the 2010 act introduced the $5 million Farm to School program, which came with three mandates: to make grants that support farm-to-school programs (thereby enabling districts to swap out those boxes of processed goods in favor of local fruits, vegetables, and meats); to encourage school gardens; and to support nutrition education.

Donna S. Martin, a school-nutrition director in rural Georgia, oversees one of the 221 school systems that have received grants. (To date, more than 1,000 have applied.) These days, Martin regularly incorporates local collard greens, grits, peaches, and whole-wheat biscuits into her menus. She doesn’t agree with the SNA’s position that kids won’t eat fresh food: “They eat twice the amount. When they see that watermelon out there, and those blueberries, and the cantaloupe and the honeydew and the strawberries, they go crazy.”

“It’s almost not about the regulations, and all about changing the culture around food. The regulations are the foundation, but kids aren’t going to eat leafy greens because the USDA told them they have to take two one-cup servings.”

Still, the transition hasn’t always been smooth. For starters, Martin has had to teach farmers how to sell to schools. She can only take washed collards, for example, and needs peaches to arrive at a particular stage of ripeness. But local farmers are so excited about selling to schools that they often approach her directly. Last year, as part of her outreach for the program, Martin held a two-hour seminar on how to supply the district. “If you can grow it,” she told the packed audience, “then we will find a way to use it.” And she kept her word. When one farmer approached her with masses of low-cost mustard greens, she immediately put them on the menu. After another mistakenly told her to keep her sweet potatoes in a refrigerator, he refunded the school district’s cash. When Martin first used the grant money to buy more local and fresh goods, she operated the program at a loss. In the upcoming year, she’ll go back to breaking even, she says, largely because she’s done a better job of negotiating with her suppliers. “It’s a lot to learn,” she says. “It’s time-consuming. But is it the right thing to do? Yes.”

NYU’s Nestle talks about visiting a Farm to School grantee in East Harlem, where the mostly male elementary-school kids have planted a vegetable garden. The boys were sent out to collect salad ingredients, she recalled. “They brought it back, washed it, dried it, and produced this really quite beautiful salad. They made the dressing, and everybody sat down to eat it.” Only two boys out of 20 didn’t touch what was in front of them, said Nestle, adding that they were all very quiet about it. (The program requires that nobody make disparaging remarks about what others are eating.) Within a few minutes, a couple of kids went over and asked, “Are you going to eat that salad? Can I have it?”

“These were 10-, 11-, 12-year-old boys eating salad,” said Nestle. “And there was no fuss about it. This was completely normal behavior. To have that experience – it’s thrilling to watch seeds turn into plants. For kids, it’s transformative: This is what lettuce tastes like, this is what peppers look like. They have never had food like this, and whether or not they will be able to carry it out into their lives, you don’t know, but it certainly creates an attitude about food that is completely different.” 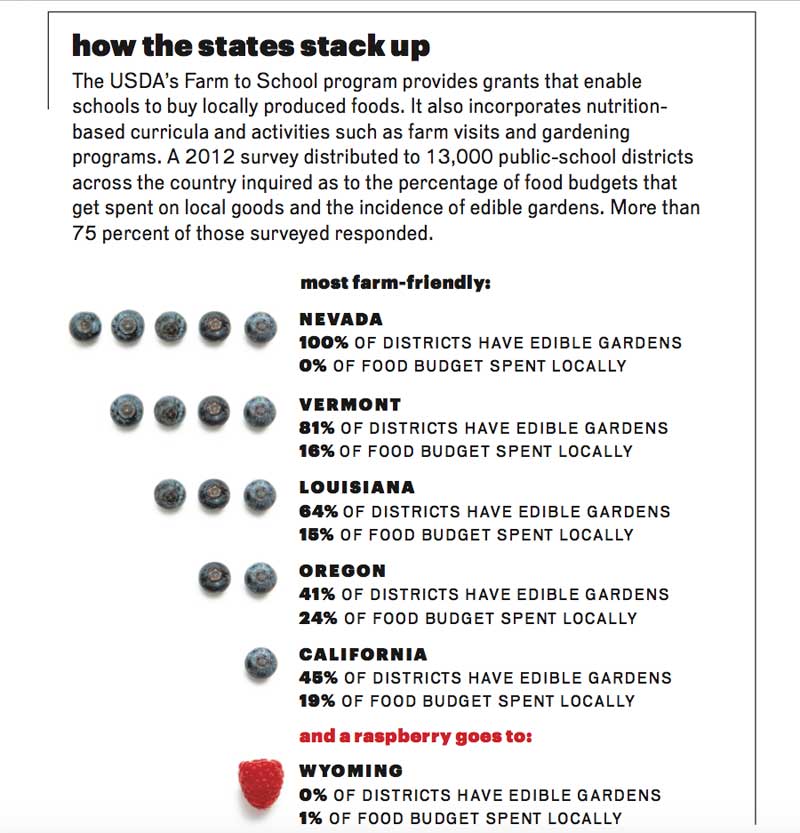 In the end, it may be that sort of attitude adjustment that matters most. “It’s almost not about the regulations,” says Deborah Kane, who directs the USDA’s Farm to School program, “and all about changing the culture around food. The regulations are the foundation, but kids aren’t going to eat leafy greens because the USDA told them they have to take two one-cup servings.”

In fact, it’s perfectly possible to meet the HHFKA’s standards with processed foods – from industrial-size cans of pears to microwave-ready Old El Paso Gorditas. General Mills, maker of the gordita, was ready with a Cocoa Puffs 25% Less Sugar Bowlpak when the first phase of nutritional standards took effect. (The company is prepared now with products, including the Fold ‘N Go, a microwavable sandwich, and Scooby-Doo! Fruit Shapes, that meet the stricter standards proposed for 2017.)

No one pretends that achieving a wholesale cultural shift will be easy. “The school service people are up against horrendous financial and sometimes physical barriers,” says Nestle. “The money issues are real.” (The National Farm to School Network is sponsoring a request for an additional $10 million for the USDA’s Farm to School grant program, and while the bill has bipartisan support in House and Senate committees, few expect it will receive that amount.) Finding farmers to grow all those watermelons, berries, and leafy greens takes effort, as does learning to store and cook them for thousands of students. But none of it is impossible.

While the decision-makers in Washington hash out the details of the HHFKA reauthorization, school officials at the district and local levels already are taking matters into their own hands. In the city of Oakland, for example, voters recently approved millions of dollars in a ballot initiative to construct a central kitchen and establish a learning garden for the district. Both will open in 2017.

“The thing that I would emphasize,” says Nestle, “is that this is an adult issue. If there are adults in these situations who think that feeding kids healthfully is a really important thing to do, somehow the job gets done.”

Can I ask please are these gardens being grown pesticide and fungicide free? This is one thing that I have to ask because I think it’s important.