A former bad boy of the New York art world is giving back with his sustainable Sky High Farm. 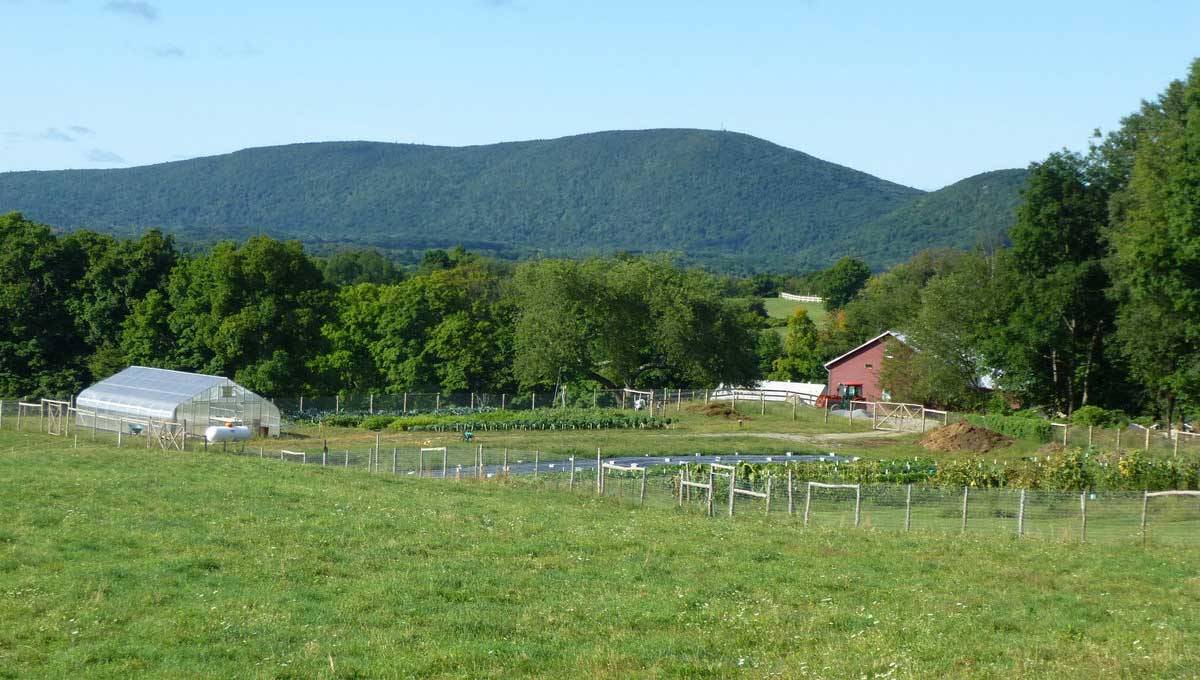 Sky High Farm is both a sustainable farm – whose produce is grown without pesticides or chemical fertilizers, alongside pasture-raised beef, pork, lamb, and chicken – and Colen’s home and art studio. He purchased the 40-acre plot in Columbia County, New York, two hours north of New York City, in 2011.

“I got the property at a moment in my life when I felt a great need for wide open space and distance from the city,” Colen tells Modern Farmer in an email. “I intended only to turn an old barn into a sculpture studio, which I did.” But as he spent more time there, he says, “it started to feel wasteful to have all the land – like all it really was was something to point at and say ‘that’s mine.'”

A friend of Colen’s, Joshua Bardfield, who has a background in public health, gave Colen the head’s up about food deserts in and around New York City. “He suggested I set up a non-profit that supplied these communities with fresh food,” Colen says. “I grew up in and around the city, so this idea of being able to give back excited me immediately.”

Bardfield felt starting a farm and donating the produce to area food banks would be “an amazing opportunity to give back to the community.” He’s now on the board of directors for the organization that’s in the process of seeking 501(c)(3) status.

“Understanding I wasn’t really in charge and eventually seeing my vision entwine with the farm’s needs was amazing. And watching the farm blossom more and more from season to season is truly thrilling.”

Colen says when they began to turn the idea into a feasible project he “had no clue” what he was doing, but that it has been “without a doubt one of the more fulfilling challenges” he’s ever taken on.

“I had a very particular vision for how I saw it coming together. Being confronted both by certain issues, which are basic to farming, as well as the more nuanced needs of the farm was a huge learning experience,” he says. “But understanding I wasn’t really in charge and eventually seeing my vision entwine with the farm’s needs was amazing. And watching the farm blossom more and more from season to season is truly thrilling.”

Meanwhile, Bardfield was busy working on developing relationships with the organizations that would help get the food to the people who needed it most. Sky High Farm works with both the Food Bank for New York City, which works with a network of more than 1,000 charities and schools citywide and provides approximately 64 million free meals per year for New Yorkers in need, as well as the Regional Food Bank for Northeastern New York, which works with about 1,000 different agencies and serves the hungry in 23 counties in New York state.

Besides the challenges that come with any sustainable farm – the odd pest infestation or weather-related problems – Sky High Farm has the additional logistical issues of coordinating the various parties to get the produce, eggs, and meat to the people who need it most. But, typically, the two food banks pick up the produce from Sky High Farm and the meat from local slaughterhouses, and then distribute it to the local food pantries based on need.

Food banks tend to get a lot of donations of packaged food, so when the farm’s donations arrive, they go fast. “For both New York City and the regional food bank, I know this is one of the only sources of fresh, local produce and protein in terms of the chicken beef and pork that’s raised in New York state,” says Bardfield.

Colen considers Sky High Farm a model that other like-minded individuals can use to provide their communities with fresh food. He says they are working towards “setting up a blueprint for use on other farms” that he believes is “straight forward” and “still leaves room for personal vision.” He would also like to expand his farm operation in the future and continue to develop deeper ties to the communities the farm serves through outreach and educational programs.

For Colen, the farm project has influenced his art in subtle ways, he says, from the landscape to the life cycles of the plants and animals on the property. But the most influential aspect on him has been the direct dialogue with the farmers who have helped make Sky High Farm a reality, he says, with each bringing “different subtleties to the project which allow me a new window of insight into the whole thing.”