The Art of Taxidermy: What It’s Like to Immortalize a Chicken

At Brooklyn's Morbid Anatomy Museum hands-on taxidermy classes fill up with students for whom challenging themselves to skin and pose a deceased animal sounds like fun. 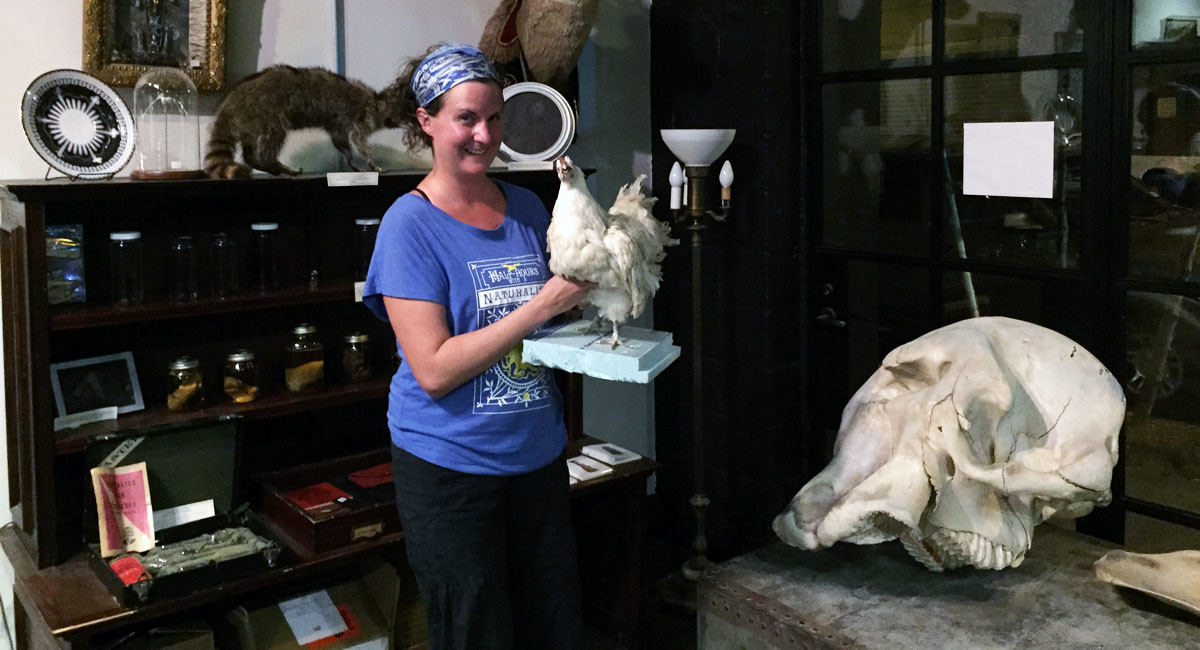 Museum founder Joanna Ebenstein has turned her passion for the grotesque into a 4,200-square-foot space filled with a collection of oddities, plus coffee and curio shops, and an educational space for the macabre in the Gowanus neighborhood, next to the new Whole Foods and adjacent to the superfund river for which the area is named. As a former Brooklynite, I “liked” the museum’s page on Facebook – they’re prolific in their posting – but most of their updates went by my events stream unattended, while I found myself wistful for the days I lived there.

Once we get to work, there’s nothing magical about the process at all. That was the most surprising thing.

However, if anything were to snap me out of my New Jersey domesticity – my current life is as a chicken farmer, mother, and chef – the Fancy Chicken Taxidermy class I saw advertised on the was it. Every bit of the description, including the “don’t bring your own dead specimens to class” rule, more than piqued my fearless pursuit of the odd and conventionally repulsive.

So on a sunny Sunday in September, I drove back to the fringe of my old neighborhood to, literally, stuff a chicken. Who else had this class on their must-do list? All women – five students and two instructors – descended into the moody basement of the museum. Professional taxidermy instructor (that’s a real job!) Katie Innamorato says this is the norm. “Ninety-five percent of the classes I teach are all women,” she says, owing, we all suppose, to the modern crafting culture and Etsy-fication of interesting objects. Katie tells us this, along with tales of her chest freezers filled with “critters,” the beetle colonies she keeps to clean carcasses, and her pet fox Banjo who will be the recipient of the meat from our birds, all of whom are laying unceremoniously on red plastic dinner plates on a square vinyl-lined table. 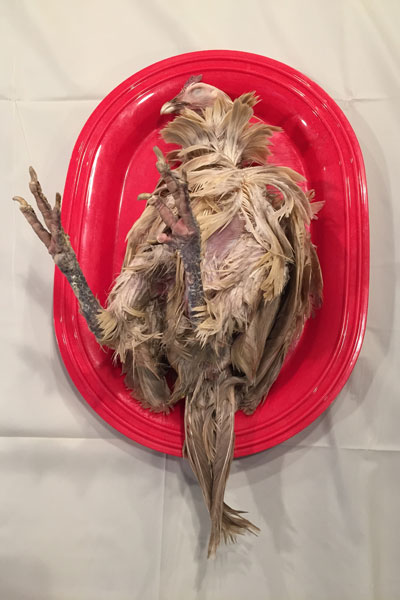 My first look at the chicken.

The birds themselves are whole, intact, and dead of natural causes. They have been frozen and are cold, wet, and far from the beautiful feathered object into which we are all hoping they will be transformed. I’m tempted to say “magically transformed” but once we get to work, there’s nothing magical about the process at all. That was the most surprising thing.

To taxidermy a chicken means to turn it inside out and remove all but the paper-thin skin and a few clean bones which will provide structure. The carcass is removed using a scalpel. The leg and wing bones are left intact and the head is pushed back through its own neck. The feathers all folded in on themselves, like a lady removing a long silk glove. I pull the scalp forward off the skull and stop where the facial skin meets the beak, peeling the eyelids forward of the eyes, which I then pop out and move to the red plastic plate, with a growing pile of meat, fat, tendons and other assorted tissue. 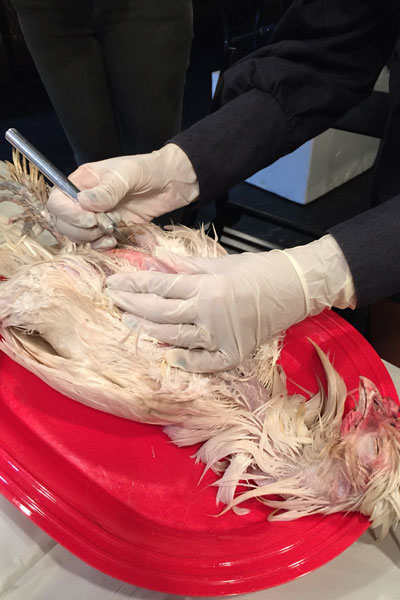 The skin is split down a center line, through which we remove all of the carcass. 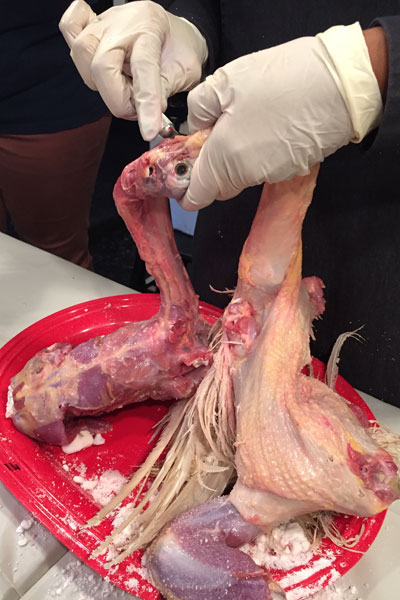 When removing the skin from the carcass, we push the head through the neck and release the comb from the skull.

Next comes “fleshing,” the heart of successful taxidermy. Using a combination of copper and steel brushes, dental tools, and 20 Mule Team Borax, we toil for more than two hours removing all of the fat, muscle, fascia, and tissues that would otherwise decay and cause stench and attract maggots. Excerebration happens through a hole we’ve cut in the back of the skull. The brain, mixed with Borax, becomes a granular, magenta paste to ease the removal. 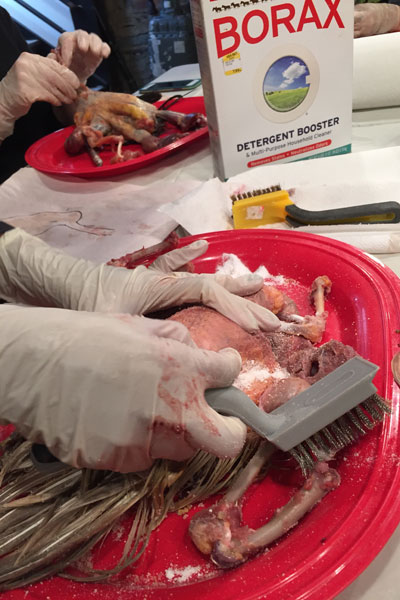 Fleshing the inside of the chicken skin with the help of wire brushes and Borax. 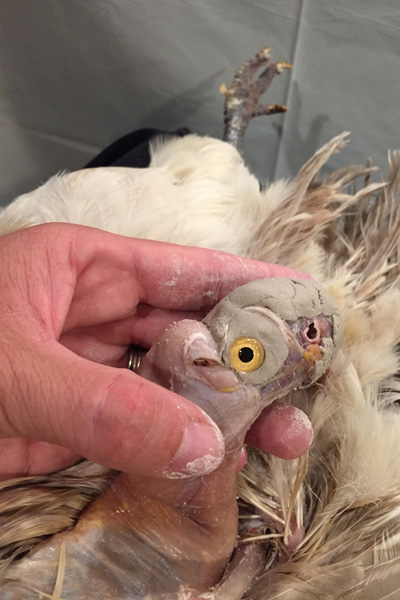 We place the glass eye in modeling clay so it sits behind the eyelid.

Defleshed, the pelt goes in for a wash in dish detergent, a second wash with a dollar store miracle cleanser called Totally Awesome (whose other indications include vomit and nicotine removal), then a soak in fabric softener. Next, a few minutes under a blow dryer and suddenly I have something remarkably chicken-like to wire and wrap around a form I’ve sculpted from wood wool and cotton thread. She smells delightful and looks like David Bowie’s wig in Labyrinth. 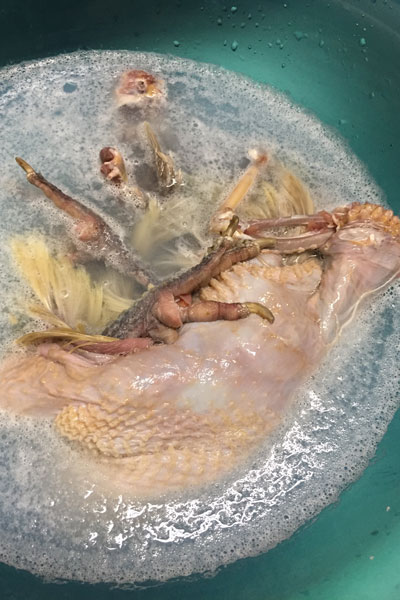 A soak in fabric softener and a cleanser called Totally Awesome is the last wet step. 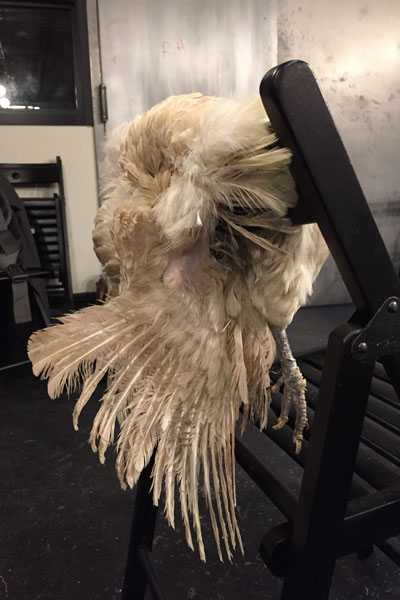 After fleshing and soaking, she gets a blowout over the back of a chair. 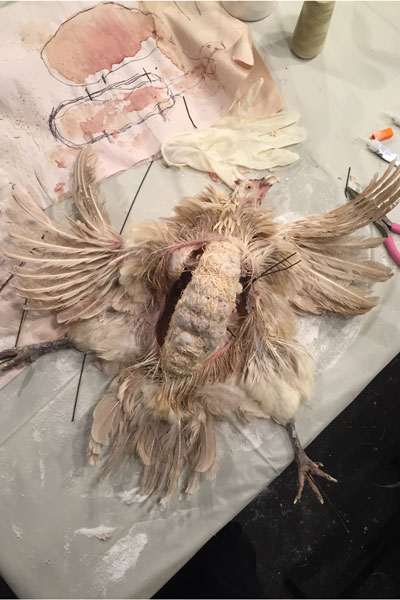 One of the last steps is forming the bird around a wood wool and wire armature.

Fleshing is instructor Divya Anantharaman’s favorite part of the taxidermy process, and there is a great satisfaction in the sounds of scraping flesh, a dental chisel against bone, like picking a really good scab. But six hours in, the moment I’ve been most excited about is here. I lay the pelt over my form and sew her up the same scalpel line I used to take her apart. I fill out her thighs with some wool, pin her tail just so, and position her mid haughty stride.

I got the eyes perfectly symmetrical so she really does look alive, but she’s far from perfect. Her balance is off and she’s looking up, as if spying a hawk, a more animated gesture than I hoped to achieve. But she’s a beautiful reminder that I touched death. In fact I stuffed it, mounted it, and brought it home my to adorn mantle.

For more information and to sign up for a workshop, visit MorbidAnatomyMuseum.org. Taxidermy workshops start at $180 depending on the animal, and include all materials, complementary visit to the museum, and your own souvenir to take home.