For the Japanese Americans interned during World War II, farming served as a tie to the past - and to the future. 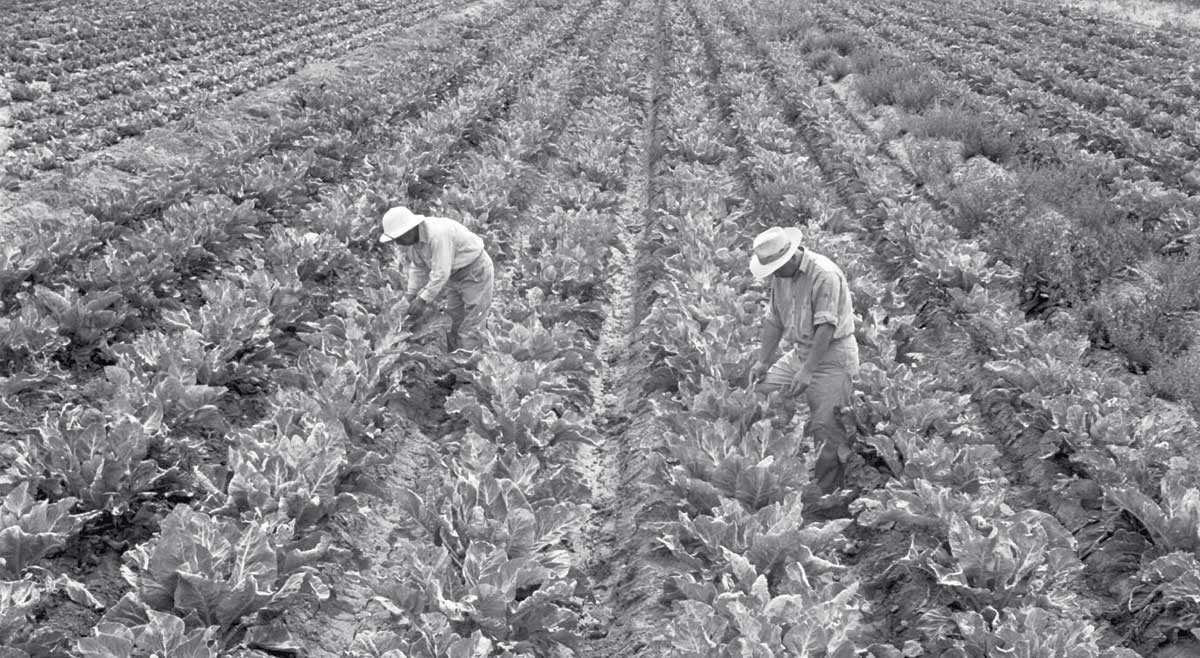 The Masumotos labored as hired hands, then went home to grow their own grapes, peaches, and plums on rented land. My grandparents, like many others, had been barred from buying property due to the discriminatory laws of the 1920s. But a thriving Japanese farm community persevered in California’s Central Valley. Most rented, some farmed under corporation names, many waited until their American-born children could finally plant deep roots. By the early 1940s, Japanese growers had established a large presence in the state’s produce and floral industries, dominating the markets in strawberries, celery, and peppers. Japanese Americans farmed more than 200,000 acres and accounted for 30 percent of California’s truck farmers.

Then World War II broke out, aiming venom at a people who looked like the enemy. The trajectory of a farm community was crushed, and an American dream shattered. 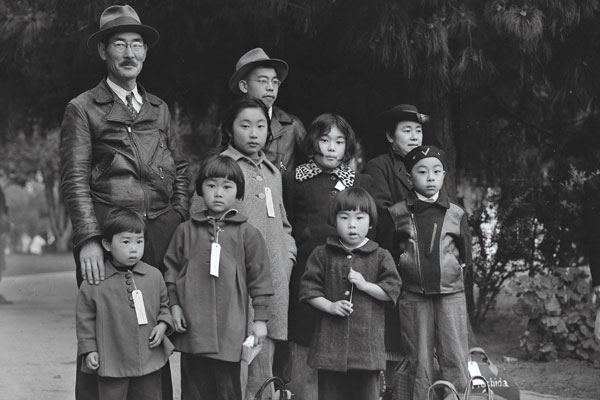 The Mochida family awaits evacuation by bus in 1942. Prior to the war, Mr. Mochida had operated a nursery and five greenhouses in Hayward, CA. Dorothea Lange / Nara

In February of 1942, President Roosevelt had signed Executive Order 9066, mandating that Japanese Americans be imprisoned in relocation camps in the nation’s interior. My family was forced to evacuate Fresno. Within a few weeks of receiving notice that summer, the Masumotos had sold their belongings, packed a few suitcases, boarded trains, and disembarked at a prison camp south of Phoenix, Arizona. They lived there, behind barbed wire and overseen by guard towers, for four years.

A stain on American history. A shame some never overcame. Many felt betrayed and became embittered. They internalized their anger, helpless and saddened that others had stood by and watched as they were stripped of their rights.

But in this dark moment of crisis, a handful of good neighbors emerged. They rose to the occasion, responding to the injustices before them. Some acts of kindness were simple and brief; others were long-term, bolstered by a fierce belief in doing the right thing. These were private acts that spoke loudly, especially in rural America, where conservative politics reigned. 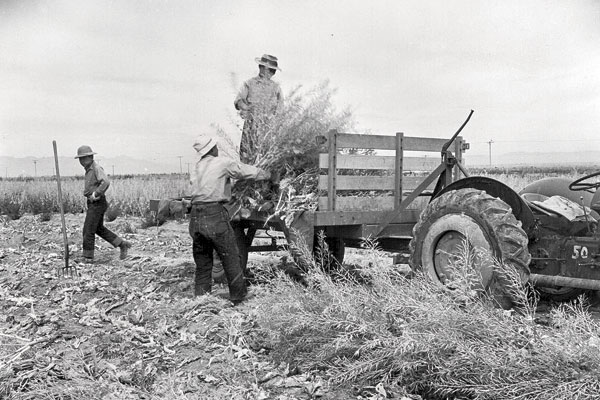 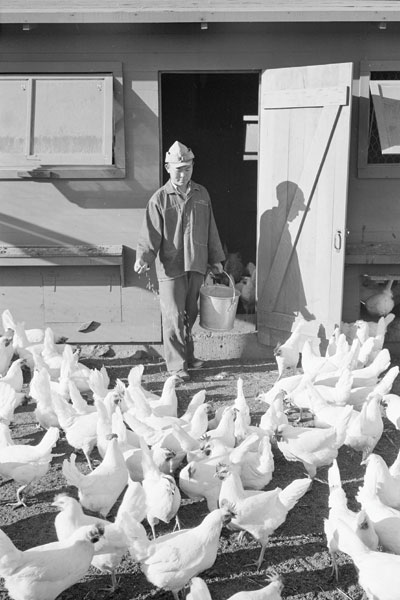 By August, the grapes my family had been growing were a month away from harvest. My grandparents’ landlord offered pennies on the dollar for the crop and, a week before their forced exile, he kicked them off the farm to make way for new renters. Homeless, my father approached a nearby farmer. The neighbor felt bad that all he could offer was a barn. But that small gesture helped in a very difficult time: The Masumotos had shelter, even if just for a week. Not everyone shunned us and detested our faces.

Even in the bleak environment of the internment camps, the spirit to work the land persevered.

The Hiyamas of nearby Fowler scrambled to find a way to protect the farm they owned. They met with a local man named Kamm Oliver, and with a handshake reached an understanding. “The right thing to do,” Oliver told me years later. He’d ignored the accusations of “Jap lover” and “traitor.” Oliver took care of the Hiyama vineyard like it was his own, sending annual checks for the raisin harvest, until the Japanese-American family returned. At one point, he and another neighbor drove from Fresno to the Gila River Relocation Center, south of Phoenix. Loaded in Oliver’s truck were furniture and other belong ings for the Hiyamas to use in their barracks. As Oliver drove deep into the Arizona desert, he wondered aloud, “Who could live in this god-forsaken place?”

In the early 1900s, a group of Japanese Americans had formed a farming association in Livingston, California. During the war years, a handful of white lawyers, bookkeepers, and office managers kept the group’s thousands of acres alive. These good neighbors regularly journeyed to the Granada Relocation Center, in Amache, Colorado, to consult with the incarcerated farmers and distribute profits. For a few Japanese-American farm communities, in the fog of war, a distant light could be seen. 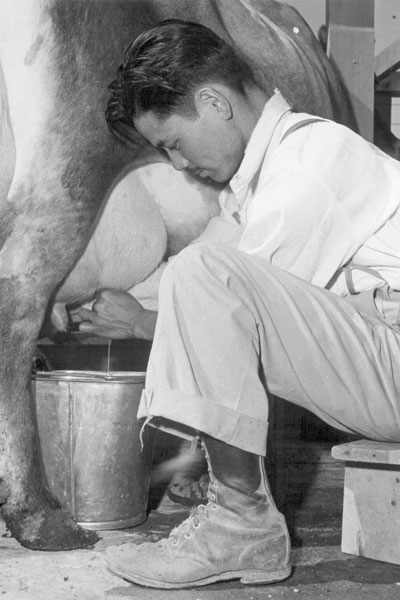 In 1943, George Takemoto, formerly of Ventura, County, CA, served as an instructor in the dairy-farm school of the Rivers, AZ, camp. Francis Stewart / Courtesy of Bancroft Library / UC Berkeley 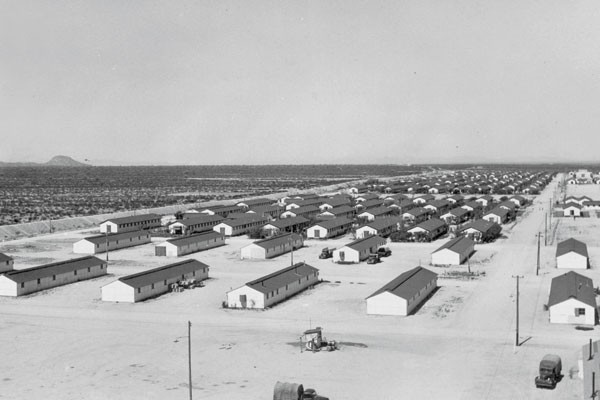 Among those interned at Arizona’s Gila River camp, which at one point housed 13,348 people, were the author’s parents and grandparents. Francis Stewart / Courtesy of Bancroft Library / UC Berkeley

Even in the bleak environment of the internment camps, the spirit to work the land persevered. It was about maintaining identity with resilience and hope. Growing food renewed a tie to something real: farming the dirt and feeding others. My dad was anxious to do something, “anything,” he said. Others thought it the best way to make the most of a bad situation.

Japanese-American farmers transformed the barren acres of Manzanar, in the California mountains; the high deserts of Heart Mountain, Wyoming; and the densely wooded areas of Jerome, Arkansas. My family worked the farms, dairy, and produce-shipping operations at Gila River Relocation Center, in Rivers, Arizona. “We grew vegetables for all the other camps,” explained one farmer there. “They couldn’t get Japanese food, so we grew daikon for everyone.” 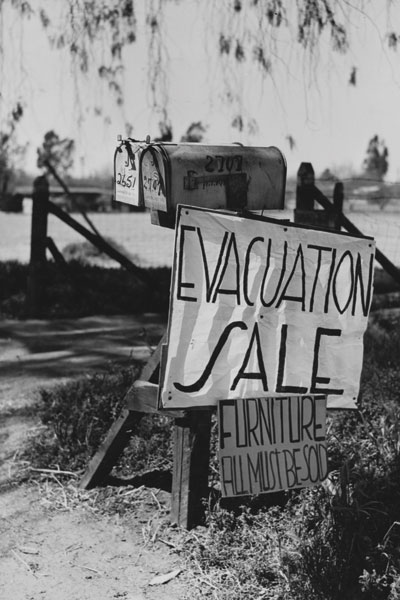 Many of those informed they would be evacuated tried to sell whatever belongings they could. Dorothea Lange / LOC

At the end of the war, some Japanese Americans abandoned their rural pasts, the lineage of farming broken. But others returned to California. As my father told me later, “We had no other place to go.” A fortunate few reclaimed farms and property, transitions made possible by the commitment of others who took care of their neighbors: quiet yet brave deeds, too-often invisible acts of courage.

The internment of Japanese-American farmers changed economic and social structures. In addition to those who never went back home were farmers who lost opportunities to expand. The nightmare of loss compelled families to pursue safe professions for their children, to send them off the farm and away to college. Shame wounded an entire generation, the spirit of entrepreneurship destroyed. It took years for my family to make a fruit label with our own name: Somehow it seemed easier to remain invisible.

It’s impossible to separate the past from the peaches and nectarines and raisins that I grow today. People don’t just buy my produce; with each peach, they consume a little of my family’s past. The taste can be bittersweet. 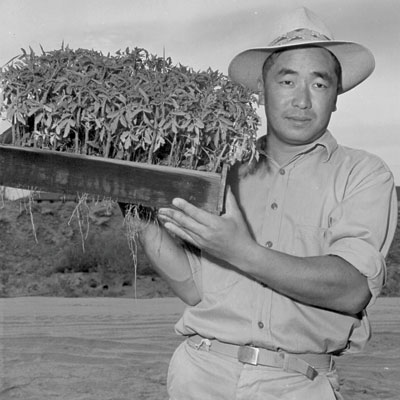 The family of George Nagamatsu, here with tomato seedlings, had owned a 300-acre farm in Santa Ana, CA. 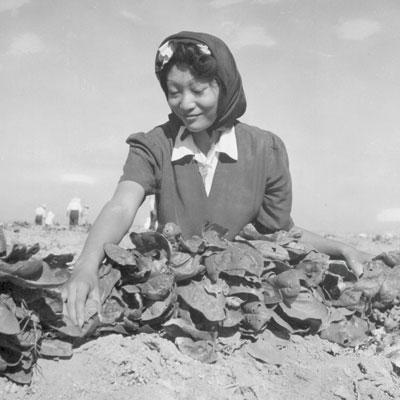 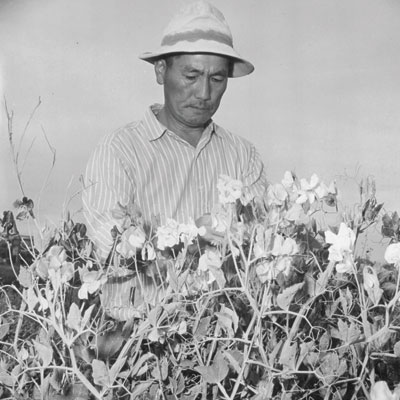 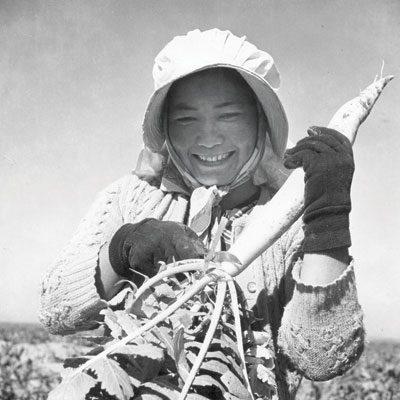 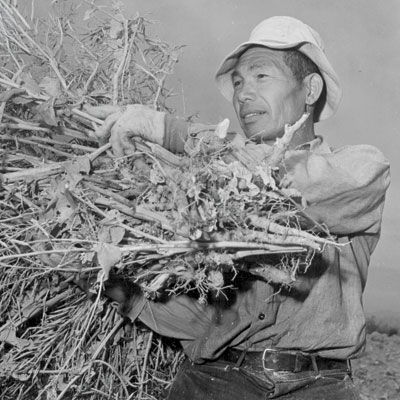 U. Shine, holding Nappa plants, had worked at a vineyard in Kingsburg, AZ. 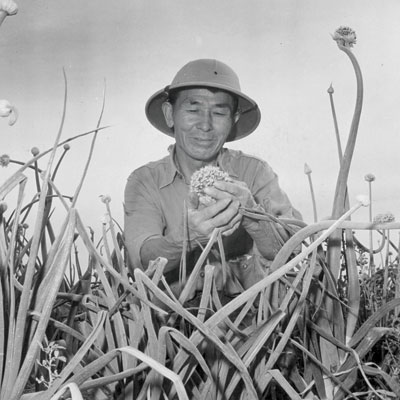 David Mas Masumoto grows organic peaches on a farm near Fresno, CA. He is the author of Epitaph for a Peach and Wisdom of the Last Farmer (2009).