Zappos' Tony Hsieh loves llamas. But he chose to bring home an alpaca instead. 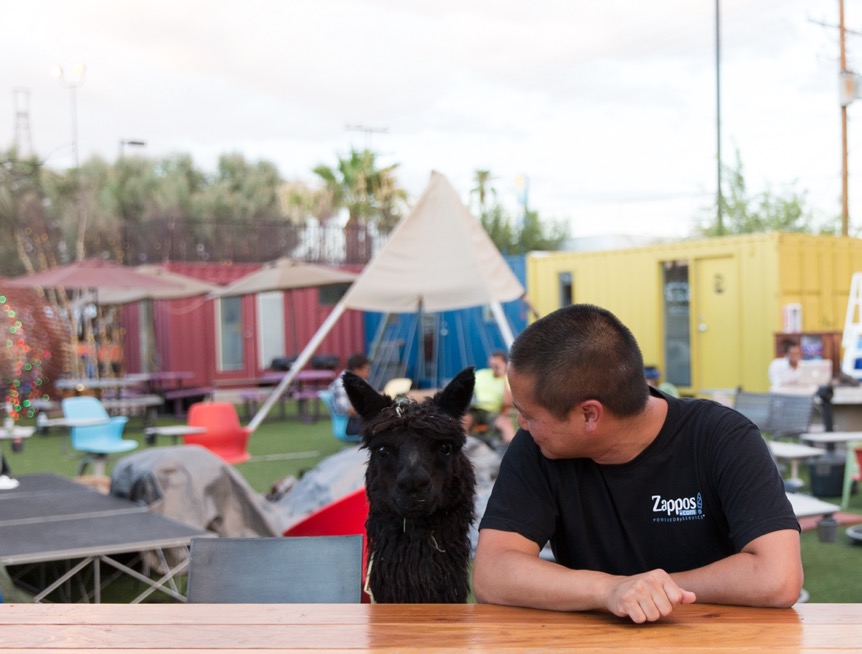 You’ll see a shot of a party hat-wearing Hsieh proffering a baby carrot to Kuzco, star of the company’s New Year’s Pajama-Llama party. The white-and-black-accented cousin to the camel – who “has in some ways become Zappos‘ unofficial mascot,” the CEO says in an email interview with Modern Farmer – shows up again in a photo from the shoe seller’s Las Vegas headquarters, tugging at a carrot from Hsieh’s mouth. And then there’s the portrait he took of a caramel-colored pair decked out in red, white, and blue.

But probably the most amusing and question-inducing photo in the feed is the silhouette of a raven-haired alpaca hovered over Hsieh’s foot while he lies in bed inside the 240-square foot Airstream trailer he calls home.

Woke up this morning to Marley the alpaca in my airstream still staring at me. #weirdsleepover #llamatrauma

Hsieh bought the vacant lot (which stretches across half a city block) in Las Vegas’s Fremont East neighborhood near Zappos’ headquarters – part of the downtown area he’s trying to revitalize – and transformed it into a village of Airstream homes for himself and an eclectic crowd of creatives.

A July story in The New York Times – that focused on Hsieh’s decision to implement a system at Zappos where employees will manage themselves – noted how Marley was hanging out with Hsieh one evening at the park’s temporary swimming pool.

But although the narrative of Zappos’ boss-free experiment was compelling, we (naturally) wanted to know more about Marley and how the alpaca landed at Airstream Park in the first place.

The answer was pretty simple: “Marley wasn’t generating enough business for [the lady who rents Kuzco to Zappos] because her customers always wanted to hire Kuzco for special events,” Hsieh says. “She offered to gift Marley to the Airstream Park that I live in.”

So, since this past May, the three-year-old alpaca has been the tallest member of the park’s pet menagerie – a group that includes a cat, Hsieh’s small terrier named Bizzy, a few other canines, and a bunch of chickens.

Since this past May, Marley, the three-year-old alpaca has been the tallest member of the park’s pet menagerie – a group that includes a cat, Hsieh’s small terrier named Bizzy, a few other canines, and a bunch of chickens.

By Hsieh’s account, Marley’s life at the Airstream Trailer Park (nicknamed “Llamalapolis” by its residents, strangely enough, despite the absence of any resident llama) is not too shabby. He takes solo jaunts around the acre-plus sized lot during the day, and socializes with fellow residents in his own unique fashion.

“He’s very curious and will approach anyone,” Hsieh says. “But if you approach him and he doesn’t know you well, he will run away.”

Though if you have baby carrots in hand – one of Marley’s favorites in a diet that includes hay – he won’t leave you alone, according to Hsieh.

At night, the alpaca sleeps in his own outdoor barn, “but he’s also spent the night in my Airstream on several occasions when he’s wandered in and just lies down on the floor after a while,” Hsieh says.

And though Marley ignores all attempts at verbal communication, the CEO thinks Marley has bonded with most of the trailer park’s residents. “You can tell because he doesn’t run away when you try to approach him,” Hsieh says, and he’ll follow you if you just start slowly walking away, he adds.

Zappos has even created a place in its mobile app for an animated tribute to the bond between Hsieh and Marley. Typing “llama” in the search box will produce the endearing photo, above, of the pair sitting together in Airstream Park. In the snapshot, the animation flashes a red heart above Hsieh’s head as he looks at Marley, head turned away from the camera. Meanwhile, the alpaca looks straight ahead with a flashing pair of eyeballs.

It’s very easy to take care of an alpaca, according to Hsieh, as Marley knows to go to his barn whenever he needs to eat or go to the bathroom.

“I would highly recommend [living with an alpaca] if you have the space,” Hsieh said. “They are curious and always fun to interact with.”

Popular
7 Smokable Plants You Can Grow That Aren’t MarijuanaBrian Barth
A Once-Forbidden Fruit Makes a ResurgenceShelby Vittek
Study: Wild Pigs Are Releasing as Much Carbon Dioxide as Millions of...Dan Nosowitz
Goat Sex: Everything You Wanted to Know But Were Afraid to AskAndrew Amelinckx
6 Differences Between Llamas and AlpacasAndrew Amelinckx
Explore Modern Farmer
Related
Food & Drink, Plants
Show Us Your Share Part 2Modern Farmer
Animals
Move Over Goats. Cattle are the New Fire Fighters in TownLindsay Campbell
Animals
Koch Foods, Pilgrim’s Pride Executives Indicted in Chicken Price-Fixing CaseDan Nosowitz
Plants
Bayer to Stop Residential Sales of Glyphosate-Based Roundup by 2023Alex Robinson
wpDiscuz
We use cookies on our website to give you the most relevant experience by remembering your preferences and repeat visits. By clicking “Accept”, you consent to the use of ALL the cookies.
Cookie settings ACCEPT
Privacy & Cookies Policy