The Definitive Guide to Raising Alpacas

Having gone from boom to bust seven years ago, alpacas are poised to once again take the country by storm. (And is it any wonder?) 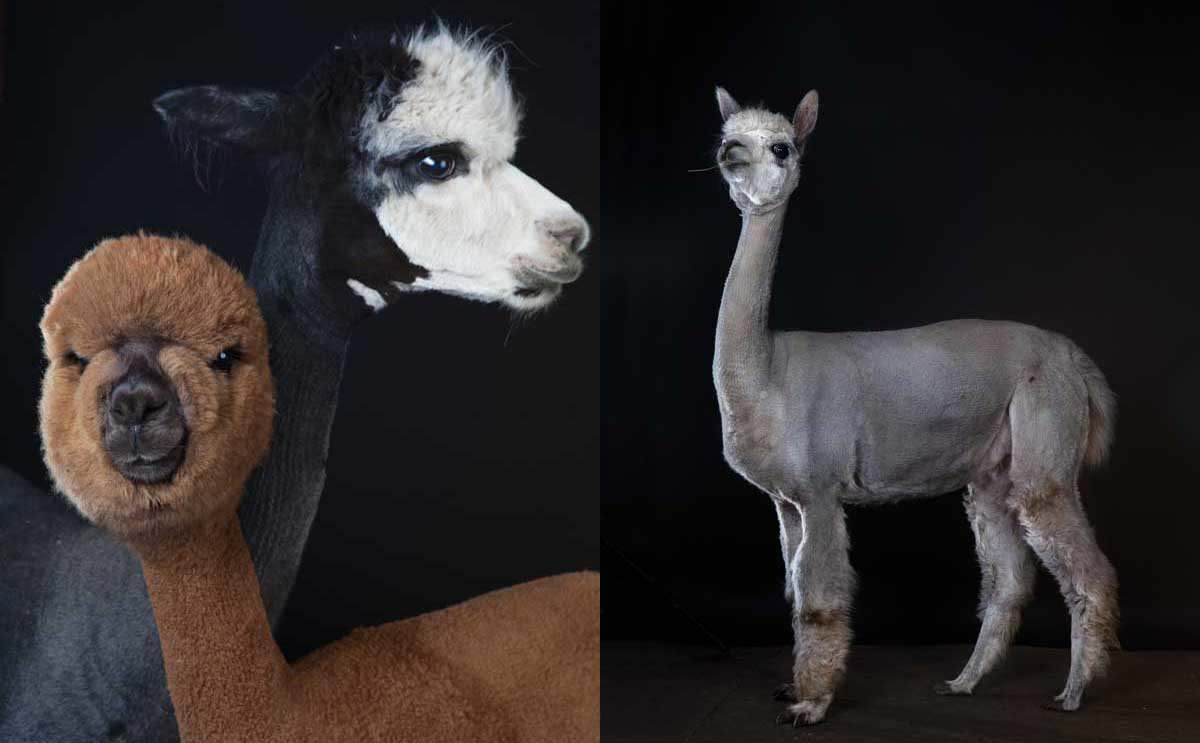 Despite their vastly different appearances, the two alpacas on the left are both the same breed: huacaya. Ditto this guy, on the right. All three shorn animals were photographed at Faith and Herb Perkins' Quarry Ridge Alpaca Farm, in Salem, NY.
Share
Tweet
Pin
Email
7K Shares

But by 2008, the boom had all but gone bust, as increasing supply, coupled with the economic crisis, pushed the industry off a cliff. Ranches closed, and rescue organizations sprang up across the nation to deal with the neglected beasts.

“It was a speculative thing,” explains Faith Perkins, who has been raising alpacas in Salem, New York, for 17 years. “These animals were new to the country, and there weren’t very many of them.” The people who’d jumped on the bandwagon (Jeb Bush among them) were relying on what Colorado alpaca rancher Mike McDermott describes as “the horse-industry model: raise the animal, show the animal, get a good ribbon for the animal, and sell the animal based on that ribbon.”

Lost in this show-pony scenario, however, was the then-exotic alpaca’s most prized attribute: its soft and luxurious fiber. Alpaca fleece is practically water-repellent and, unlike sheep’s wool, lanolin-free and therefore hypoallergenic. “Now the animals are finally getting into a more realistic range for people who want to make money farming them for fiber,” McDermott says of prices that have dropped by as much as two-thirds. Mike Safley, the Hillsboro, Oregon, breeder who helped create the U.S. alpaca registry in 1989, warns that the get-rich-quick days are over. “It’s a full-time job,” he says. Safley estimates that only 10 to 15 percent of U.S. alpaca farmers currently make a profit. But as a true market for alpaca fiber begins to take root in this country, the opportunities are only growing. 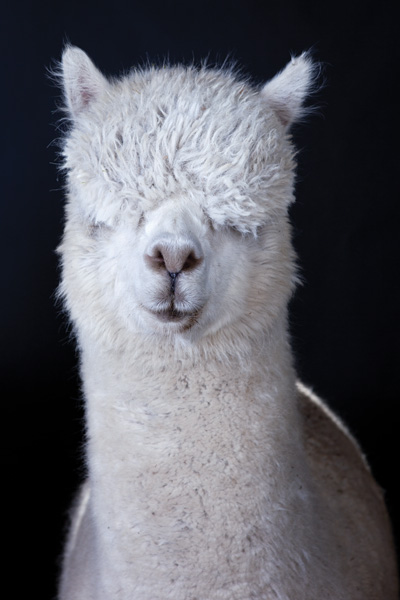 This woolly Clover Honey huacaya has yet to receive an annual trim. 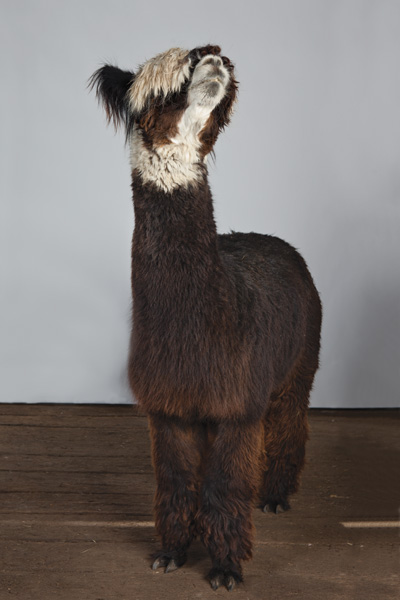 This unshorn huacaya from Clover Honey is clearly not ready for his close-up.

And really, who could resist these guys? Alpacas go beyond adorable – they grow to about half the size of a llama and can be white, black, brown, or any shade in between. They don’t bite or butt, and are free of sharp teeth, horns, hooves, and claws. “They’re quite docile and easy to work with,” says Perkins of her herd of 23. They also make fine groundskeepers: Alpacas’ feet have soft pads, which won’t churn up the earth the way hard cow hooves do. And instead of pulling grass out by the root, the camelids nibble off the top of the plant. Essentially litter-box animals, they establish a few communal spots for their poop – which yields killer compost. Because alpacas have three-compartment stomachs, their dung gets a head start on processing. Safley sells the stuff to organic farmers, who “rave about it in terms of its nutritional value for vegetables.” (Still, we cannot tell a lie: Alpacas spit. Mostly at each other, it’s true, but an owner can get caught in the crossfire.)

Alpacas go beyond adorable. They don’t bite or butt, and are free of sharp teeth, horns, hooves, and claws.

There are a few things you should know if you’re thinking about buying an alpaca. First, you’ll be purchasing more than one (the herd animals prefer company). The typical lifespan is 15 to 20 years. And there are only two breeds: the huacaya, which comprise 80 percent of the alpacas in the United States, and the longer-haired suri. Though prices don’t vary much by breed, they range widely according to purpose. You can nab a pet, basically a cute lawnmower, for as little as $200. A nonbreeding male with decent fiber runs $500 to $1,000. Females who produce both fiber and offspring typically start at $3,000 and can go up to $30,000 or more, while show-worthy herd sires still fetch as much as $60,000. These last cost so much because only 2 or 3 percent of males are used for stud, and neither artificial insemination nor embryo transfer is permitted by the national registry system, now overseen by the Alpaca Owners Association. Based in Lincoln, Nebraska, the nonprofit organization can recommend a breeder in your area. (The registry doesn’t recognize alpacas imported after 1998.)

Once you bring your alpacas home, caring for them is pretty straightforward. Extremely hardy, the animals require only basic shelter for protection from bad weather. A barn’s nice, but a three-sided lean-to will do. As for food, it’s all about hay and grass. “Alpacas eat less per month than a Labrador retriever,” says Perkins. Safley suggests allowing one acre of pasture for every three to five animals and supplementing with orchard”“grass hay, especially during the dead of winter. He feeds three alpacas a ton of hay – about $200 to $400 worth – a year. 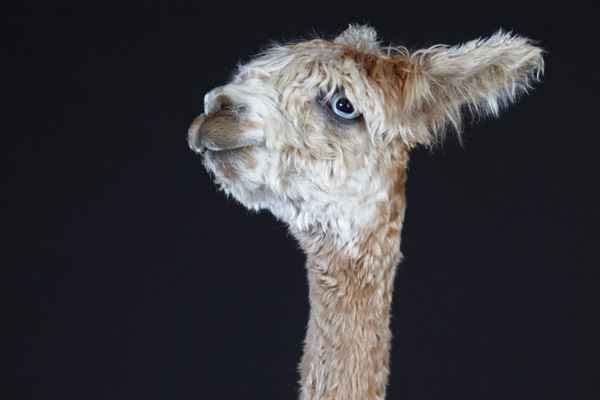 This baby suri from little river alpacas experienced her first shearing this past spring.

You’ll want to shear your animals annually. (Wait any longer, and the fiber will become matted and difficult to remove, not to mention too tangled and filthy to sell.) Most owners shear in the spring, so the alpacas are cool through the summer months and have developed some insulation by the time winter rolls around. “It’s really important for the animal that you remove the fiber before it gets too hot,” says Tim Sheets, who, with his wife, Beth, runs Heritage Farm Suri Alpacas, in Flora, Indiana. “Otherwise, it can be very stressful for them.” An average shearer will charge $25 to $35 per animal, and the process shouldn’t take more than 20 minutes. Other health requirements are limited to basic vaccinations, antiparasitic medicines, and quarterly toenail clippings. Females generally give birth without any human help. And should you need to take alpacas to the vet, they’ll “cush” comfortably (folding their legs beneath their bodies) in the back of a minivan or SUV.

As a true market for alpaca fiber begins to take root in this country, the opportunities are only growing.

According to Safley, the only way for a big farm to turn a serious profit is still to breed, show, and sell alpacas. “The cost of the fiber and the labor in Peru is almost impossible to compete with in an international market,” he explains. Still, the number of farmers in this country breeding the animals primarily for fiber is expanding, with many figuring out lucrative side gigs. Faith Perkins, for instance, washes, spins, and processes her good fiber herself (she sends the coarse belly and leg fiber out to be woven into rugs) and sells the yarn at festivals. Mike McDermott provides shearing and processing (washing, cleaning, drying, separating, and conditioning) services to other farmers. Tim and Beth Sheets send their fleece away to a mini-mill where it’s processed and made into yarn, socks, and other products that they sell at a farm shop and crafts fairs.

While some of the larger alpaca farms in this country have begun to pool their highest-quality fiber for baling and selling to the fashion industry in Europe, the ultimate goal is to get more fiber produced in the United States, thereby justifying domestic mills and creating other economies of scale. “In order to have a commercial industry, we really need more people raising alpacas,” Sheets says. “By no means is this a saturated market.” 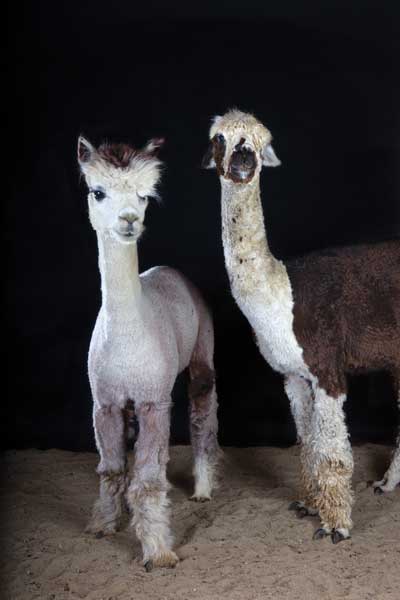 There are only two alpaca breeds: huacaya (left) and suri (right). And it can be tough to tell them apart when newly shorn, like this pair. Huacayas (wah-KI-ahs), which account for some 80 percent of all alpacas in this country, have a fluffy, crimped fleece that grows perpendicular to the skin. Like sheep’s wool, the resilient fiber is well-suited to knitting. Suris (SOO-rees) sport silkier, heavier locks that hang down, lending the animals a shaggy look before shearing. more akin to mohair and on the slippery side, suri fiber tends to get blended with cotton, wool, or silk for use in high-end fabrics. Though the less common suris used to cost more, prices have evened out in recent years. 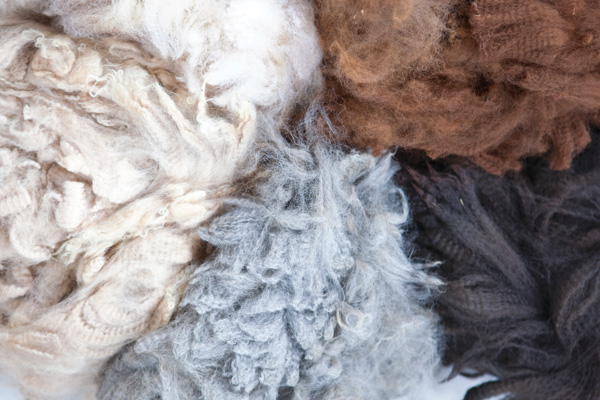 Alpacas come in about 70 hues, from white to black, with all manner of seductive cinnamons, coffees, and silvers in between. While fiber quality (including weight, length, curvature, and uniformity) is relatively easy to breed for, color is not. Still, Mike Safley, a longtime alpaca breeder based in Oregon, believes it’s possible to influence the outcome. (If you’ll be dying the fiber, for example, you’ll probably want it to be on the lighter side.) Pigmentation of the skin, he says, is a major indicator. Check out the toenails, lips, and extremities of your sire and dam. If they’re black, you’ll likely get offspring with dark fleece. Skin on the pinker end typically produces lighter fibers.

Safley has taken the results of an exhaustive Australian color-inheritance study and used them to create his own “breeding color calculator.” (You’ll find it on his website, alpacas.com.) Simply enter the colors of the two alpacas you intend to breed (Safley divides the hues into families of black, brown, fawn, gray, and white), and the calculator yields the probability, on a percentage basis, of the outcome. 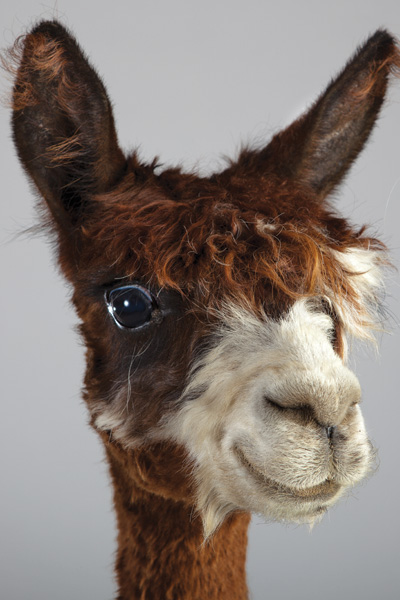 This shorn alpaca, a resident of Little River Alpacas in Hampton, CT, is a suri breed. 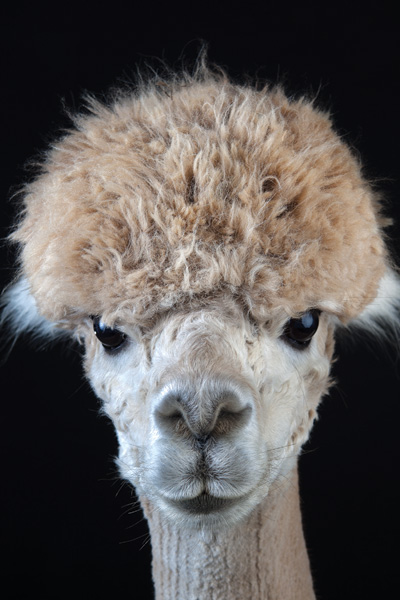 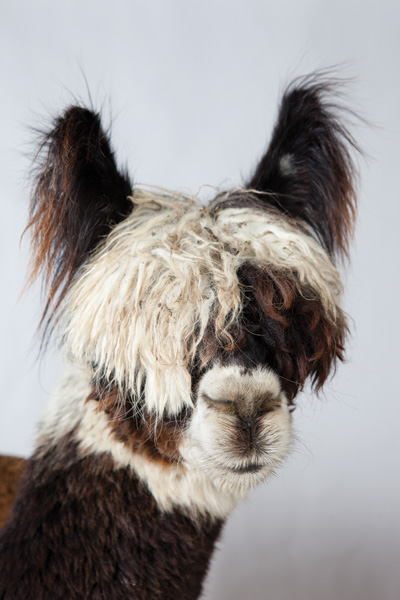 A huacaya from Clover Honey Alpacas in Schaghticoke, NY, lets it all hang out. 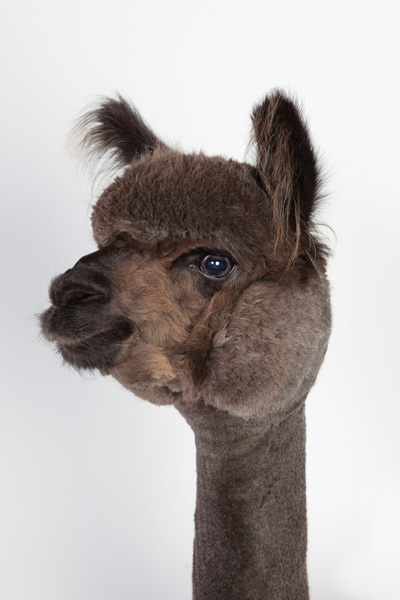 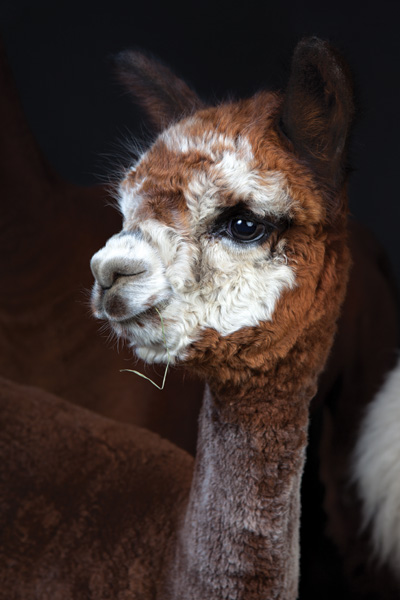 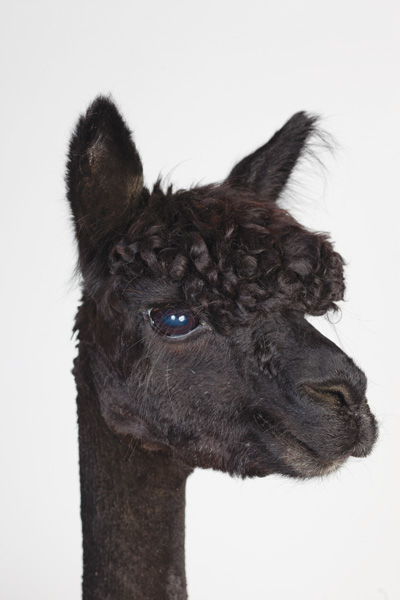 I am looking at the Possibility of having 5=68 alpacas if I were to live in southern BC on approx 7 acres.. I am in my 60’s, not really farmed.
my friend has farmed but has a left side deficit- i had a stroke , can walk but has limits. I would probably have 2 dogs to protect the herd, Would look to make use of fiber they produce. Thank You in advance/

I sooooooo want a couple alpacas!

I’d like to know how to gentle one that is a bit nervous and difficult to catch. I think she was mistreated before I got her. She will eat from my hand finally but can’t get really up to her. I’d like to gentle both she and now she has a baby. Ideas?

Thanks!!!!$$$$$😍😊 a MILLION$$$$!Your information was very face on, I truly Appreciate Your directness! I’ve been DREAMING of Starting My ALPACA FARM, but felt as I got Older and Had Munchins it felt like an IMPOSSIBLE DREAM! NOW after reading this Very Eye Opening Wonderful Article! This dream is Now on its way to becoming My Families BLESSED AWESOMENESS REALITY!!!!!!!! Thanks for all the INSPIRATION and INFORMATION!