A Farm and Forage Dinner in the Northern Catskills

Inez Valk left Brooklyn for a backwoods parcel way upstate - then built a life around it, opening a restaurant that turned area farmers into friends. 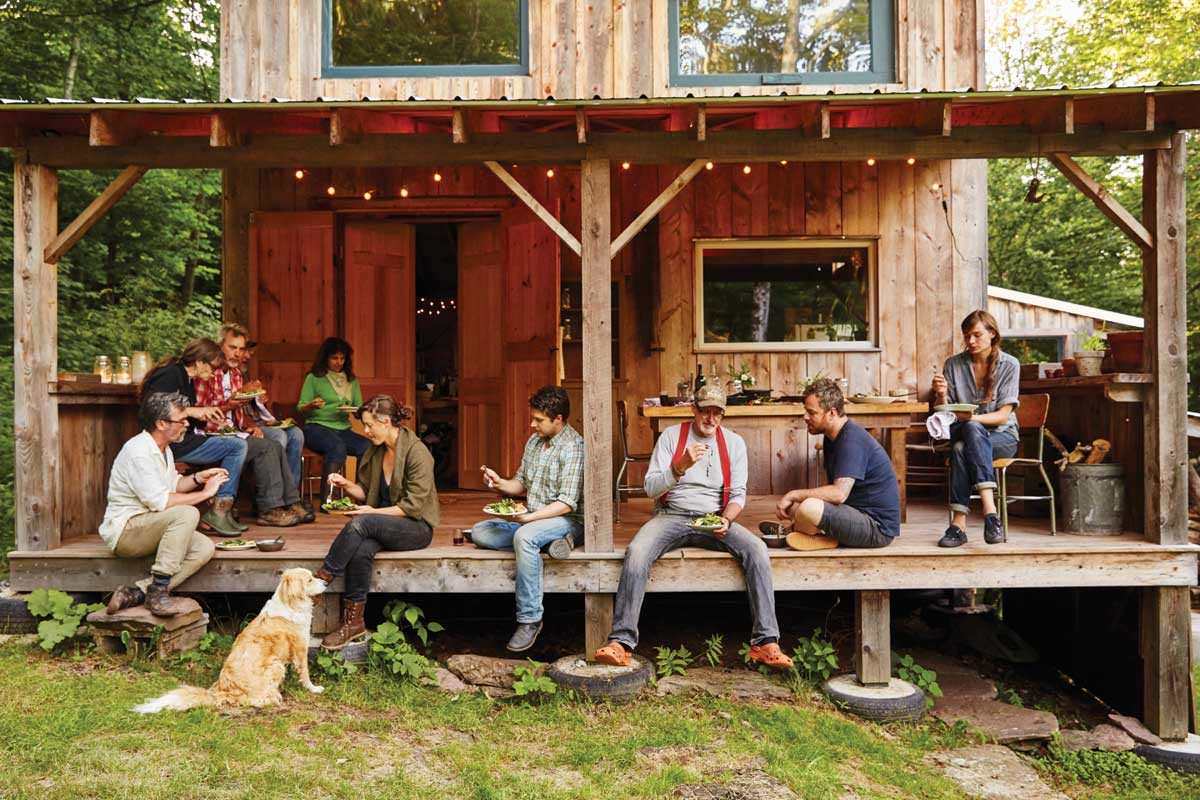 Her 600-square-foot cabin sits deep in the Catskill Mountains, about a 10-minute drive from the Middle of Nowhere – otherwise known as Bloomville, New York (population 213) – at the very end of a winding road appropriately named Dancing Street, given the way cars jump and wiggle along its rough terrain. Brooklyn? That can require a four-hour commute. “This is a very unlikely place for a young person to live,” admits the 33-year-old Netherlands native. Especially a single young person.

When Valk first fell in love with the area, nearly a decade ago, she was also deeply in love. The then-fashion-model had just moved into a Williamsburg one-bedroom with carpenter Justus Kempthorne. The couple often headed north to experience a rougher rural existence. “We were swimming in ponds and having a great time,” she recalls. “But then we looked closer and found that our friends up here were working for themselves, running businesses out of their homes. I became aware of the possibilities in the city being a lot more limited.”

In 2008, Valk and Kempthorne scored five acres in Delaware County that met their criteria: cheap, remote, and with a pond. The two spent the following summer living in a teepee while constructing their future home by any means available. Windows were salvaged from a soon-to-be-demolished gas station. Scrap lumber was cleaned up and transformed into walls.

Once the cabin was finished, though, Valk began to suffer from, well, cabin fever. She craved social interaction and, to put it bluntly, an income: “You realize that you don’t just want to sit at the end of a dead-end road. The story needs to continue.” 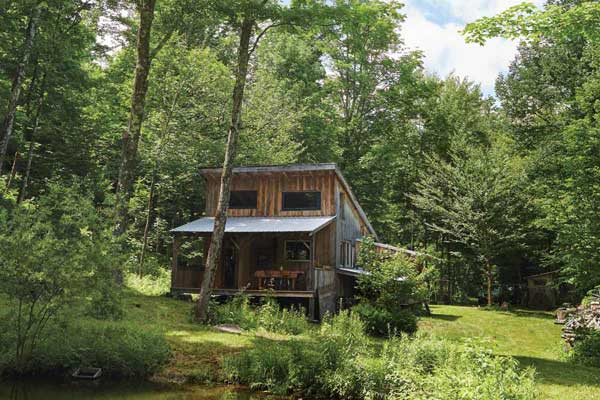 Valk’s 600-square-foot cabin, just outside of town, was built from scrap lumber and salvaged windows.

Inspired by her friends Emily and Melissa Elsen – the South Dakotan sisters behind Brooklyn’s destination pie shop Four & Twenty Blackbirds – Valk envisioned her next chapter in a neglected former boardinghouse at the intersection of Bloomville’s sleepy River Street and Route 10.

“Emily and Melissa created a job for themselves where there wasn’t one,” she explains. “They were doing something they loved and were in control of it. Modeling was the opposite of that. There was no control at all. You were sent to this place or that place. Fly here, show up there, wear somebody else’s clothes.”

Today, Valk’s laid-back restaurant, Table on Ten, serves familiar, down-to-earth fare – salads, sandwiches, and pizzas – elevated by extraordinary ingredients. She gets raw-milk cheese and pasture-raised pork from nearby Bovina Valley Farm, heirloom lettuces grown some 20 miles away at Star Route Farm, and eggs laid by cage-free hens at Bloomville’s own Byebrook Farm. Bon Appétit, Travel+Leisure, and Vogue have taken notice, bringing national attention to what had essentially become a ghost town. Valk’s priorities, however, remain resolutely local. She encourages community organizations to use the space for events and regularly hosts foraging workshops led by area herbalist Marguerite Uhlmann-Bower. If a neighbor wanders in with garden surplus, Valk has been known to incorporate it into the day’s menu. 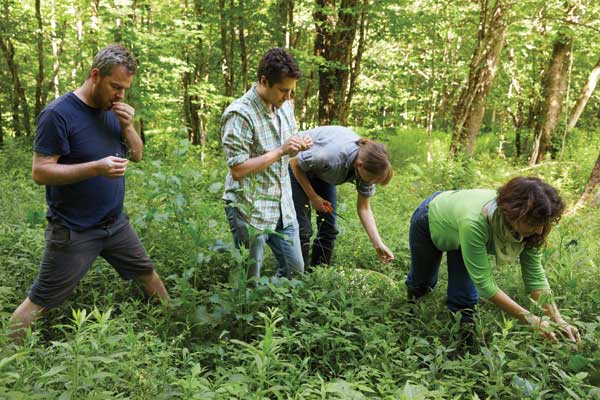 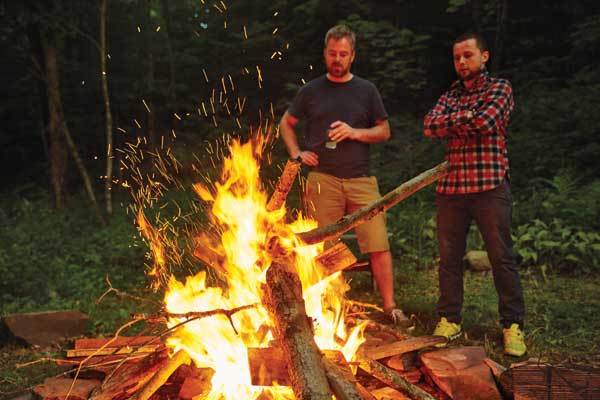 Farrell (near right) and his coworker Evershed Mattingly catch up around the bonfire.

The Brooklyn transplant’s tight-knit relationship with longtime residents was far from guaranteed in 2012, when she and Kempthorne first undertook their renovation of the 1860s Italianate that houses Table on Ten. “I’ve seen a lot of restaurants come and go up here,” explains Star Route Farm’s Walter Riesen. “The owners borrow a million dollars and do it up in some gaudy style, and they’re out of business in a year because they can’t sustain that. Inez worked within her budget and created an inviting, warm place.”

Adds Steve Burnett, whose Bovina farm supplies Valk’s café with organic produce, “Inez has a heartfelt empathy for farming. She’s constantly curious about what we’re growing and plates it deliciously.” Valk shrugs off the notion that she’s doing the region’s farmers any favors. “I couldn’t go to Whole Foods if I wanted to,” she says. “Food of amazing quality is right here. It would be ridiculous to cook with ingredients from miles away.” Instead, she characterizes Table on Ten as “a pain in the ass. We buy small volume, but insist on the best-looking radishes.” 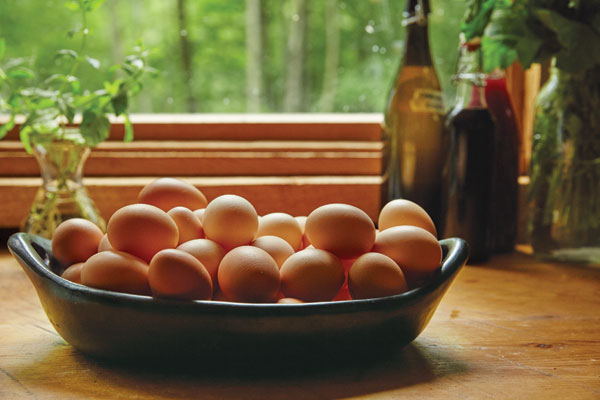 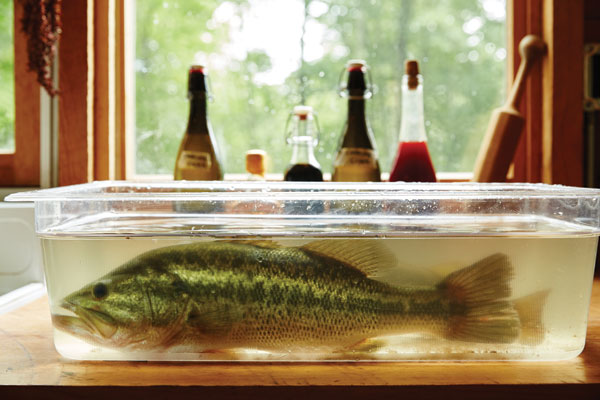 As a way of thanking her purveyors, the restaurateur recently hosted an intimate dinner that she dubbed the “Dancing Street Summit.” Burnett arrived with a freshly caught three-pound bass that Valk and his pal Jonathan Poiarkoff, chef at Brooklyn’s The Pines and Willow, grilled and tossed with hard-boiled Byebrook Farm eggs. Uhlmann-Bower foraged stinging nettles from the surrounding forest for a sophisticated soup topped with dollops of ricotta made with Bovina Valley Farm’s heavy cream. Riesen contributed chicory, fennel, and heirloom lettuces for a series of salads. Even the party’s small-batch bourbon, corn whiskey, and absinthe boasted a local pedigree, courtesy of Delaware Phoenix Distillery in Walton. The group enjoyed the meal the way good friends do – buffet-style, plates on laps, at whatever back-porch perch seemed most comfortable – before swapping stories around a roaring bonfire. 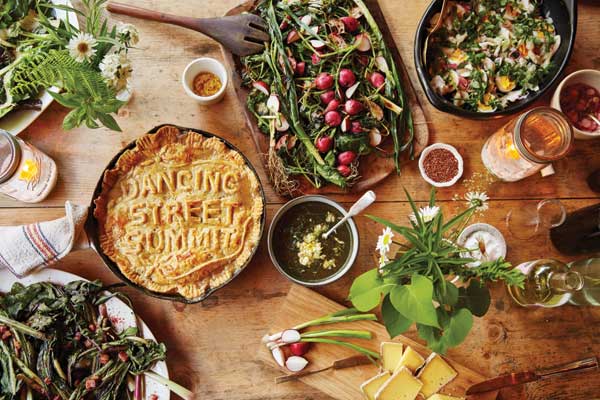 Valk titled her dinner party the “Dancing Street Summit” after the winding road to her cabin, then spelled out the message atop a savory rabbit pot pie. The spread also featured (clockwise, from bottom left) grilled chicory with bacon vinaigrette, radish salad, and grilled bass with hard-boiled eggs.

Valk, who parted ways with Kempthorne a little over a year ago, doesn’t want the resulting photography to deceive you. “This is an amazing place, dotted with amazing people,” she says. “It’s flattering to have our lives perceived as a romantic ideal, but the winters are long, and we tend to be isolated. The work is really hard, without the corollary of significant financial reward. Few things come easy. Everything has to be earned.” 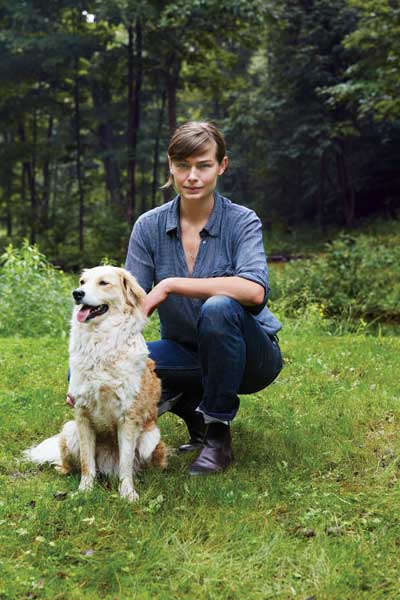 Valk rescued her female mutt, Ollie, from a local shelter. 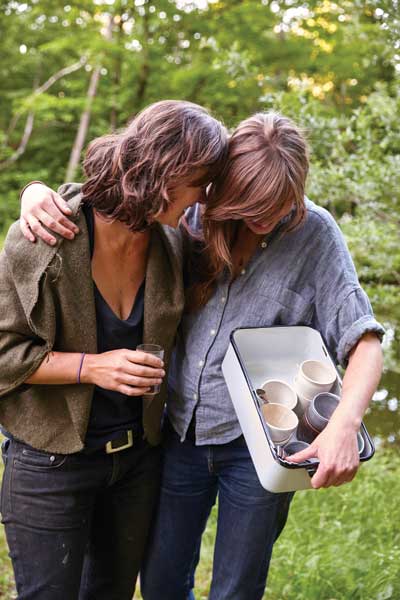 The chef shares a laugh with Kennedy. 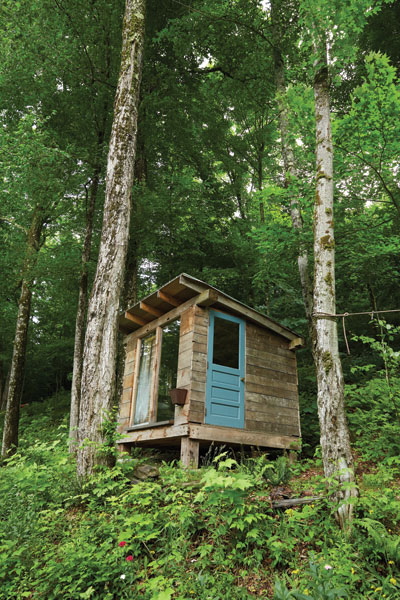 One of the two guest cabins on Valk’s property is clad in reclaimed wood. 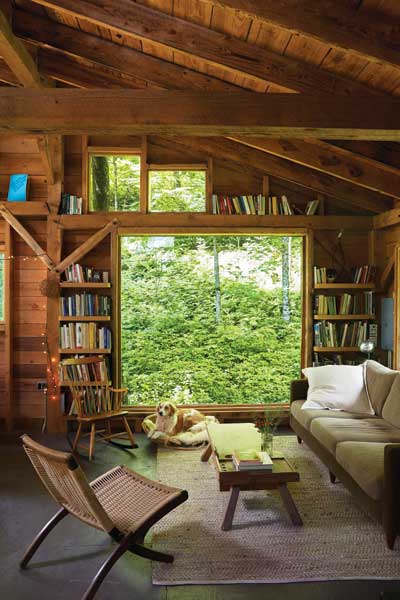 Insulating the cabin’s exterior walls allowed Valk to leave the framework exposed inside. 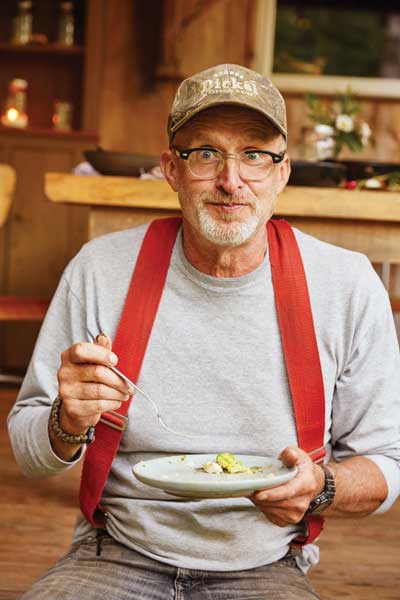 Steve Burnett grows organic fruits and vegetables in nearby Bovina. 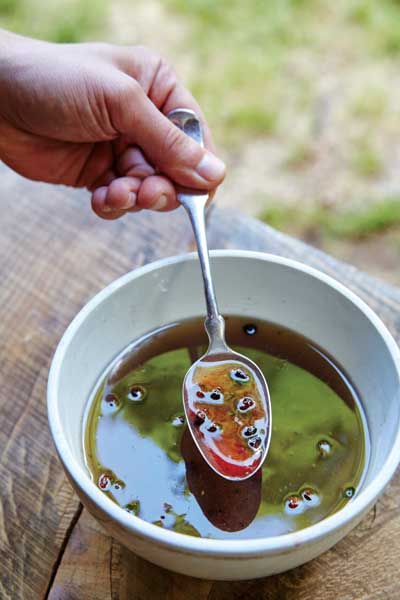 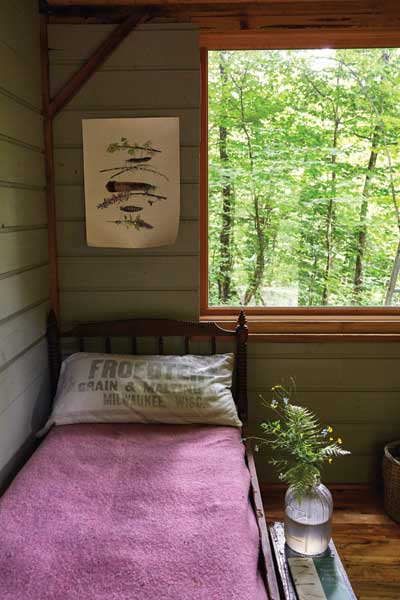 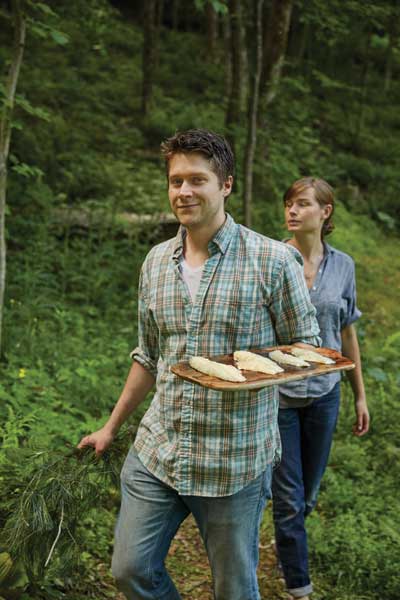 Poiarkoff and Valk ferry the filleted fish to the grill. 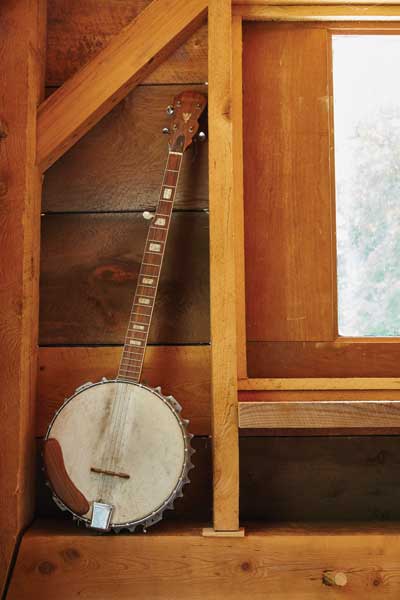 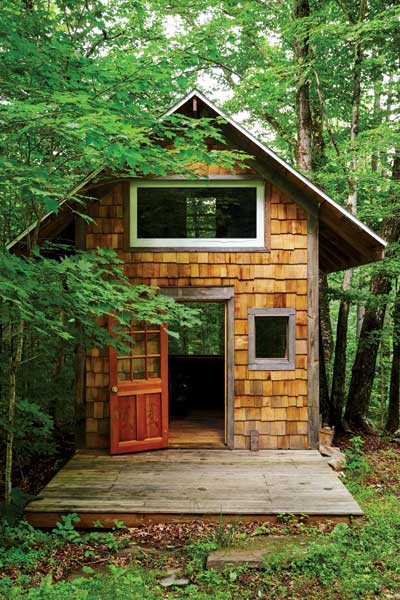 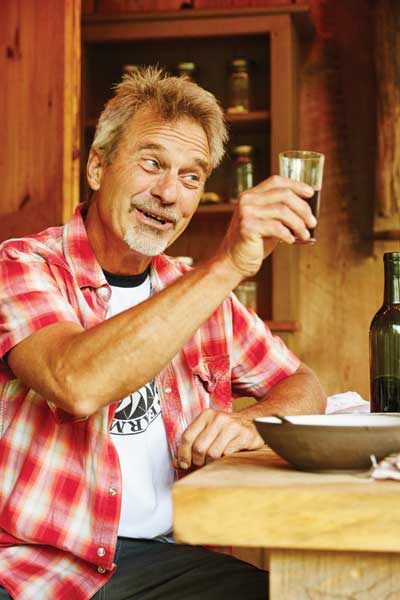 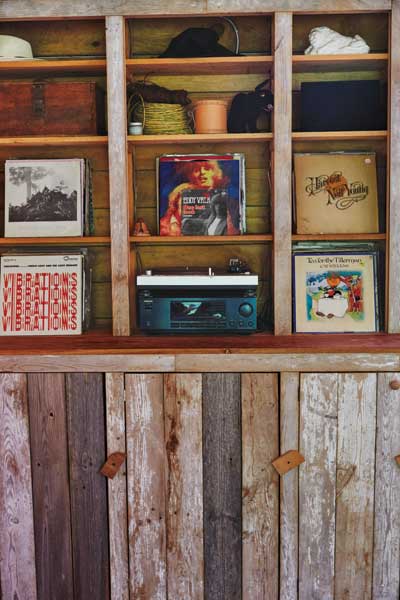 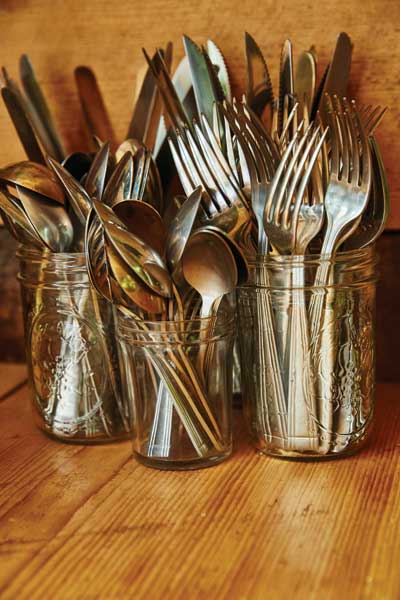 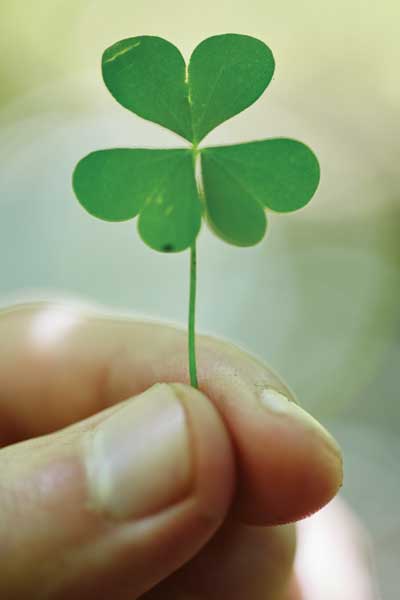 What’s luckier than a four-leaf clover? Finding citrusy wood sorrel in your forest.

it is so cool!!! I love the smiles and the forest house !!

Amazing story. Very well done and I bet it is great for the souil!

This looks like such a wonderful refuge. I am delighted to have stumbled on this site.