At This New Jersey Farm, Alpacas Help the Mentally Ill 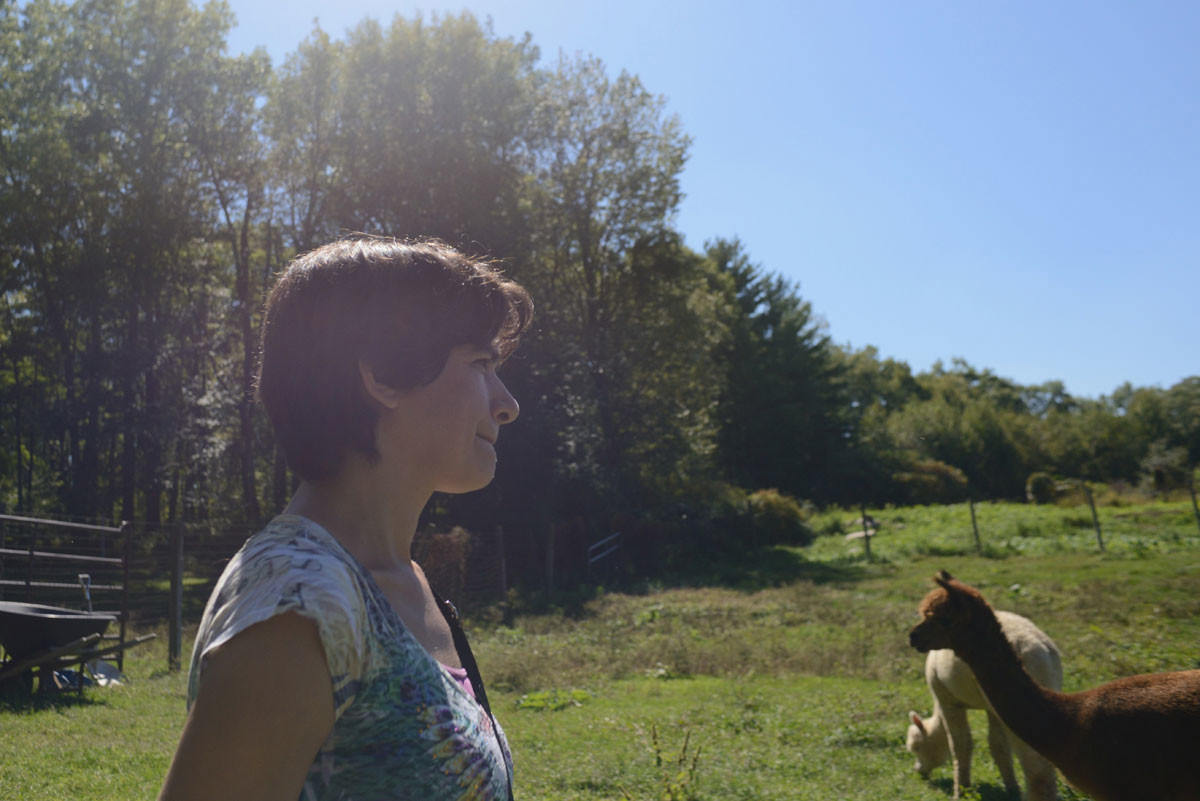 “I understand the animals can be stereotyped just like I was stereotyped,” says Ford, 28, who helps care for the pack of alpacas who call Fountain House Farm at High Point home. Ford finds comfort in the animals. They’re more like gentle pets than wild beasts, she says.

The farm in rural Montague, New Jersey, is part of Fountain House, a New York City-based organization dedicated to helping members with mental illness recover and gain new skills, find jobs, and make lasting friendships. It’s a place that helps further the organization’s mission by giving members a place for mindfulness and a space to learn new skills. Ford has been a member for two-and-a-half years and stays at the farm for about a week a month. “Coming to Fountain House and having people give you a hug, and not call you crazy, and love you is the same as me going to that barn and feeding [the alpacas] and not being afraid,” she says. 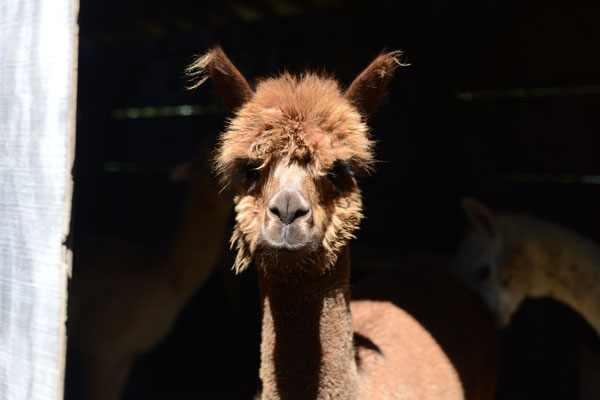 At the farm, members feed and water the alpacas regularly and perform basic veterinary care, while supervised by staff. Both the animals and the members benefit from the socialization. The animals are easily managed and stay calm, and, according the Fountain House’s president Kenn J. Dudek, “People spending time with animals, particularly for people who have schizophrenia, is a very useful process. Sometimes people can’t relate to people well, but animals are a little bit easier.” 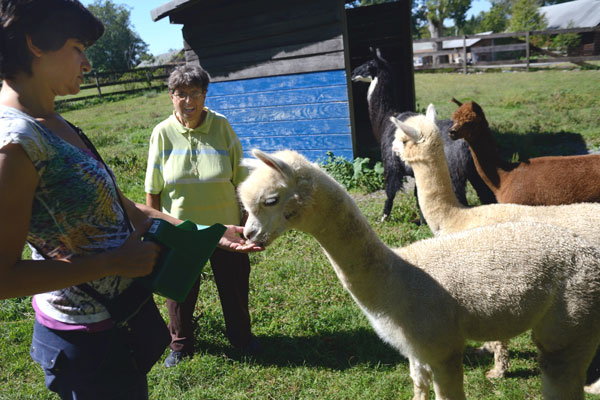 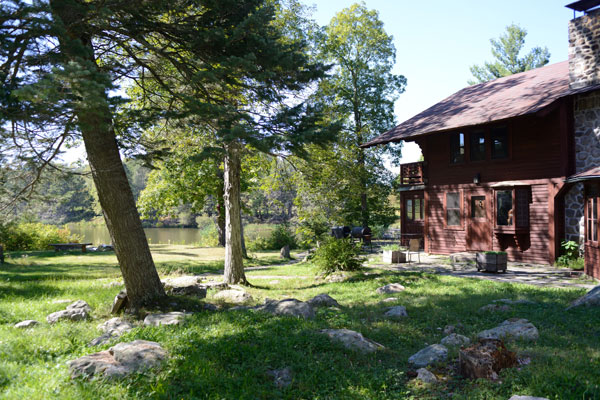 The chalet on the farm’s ground sleeps 18.

Along with the farm’s 14 alpacas, the 447-acre parcel of land consists of vegetable gardens, an orchard, a 10-acre lake, miles of forest, and a chalet to house members and staff. The farm was a gift from a family whose mentally ill son found solace in the tranquil spot. All members visit the farm; some for day visits or just a few weeks a year. Others, likes Ford, take an active role in the farm’s day-to-day work.

Although the farm has been part of the organization since the 1970s, it wasn’t until Dudek started in the 1990s that alpacas were incorporated.

At a time when alpacas could fetch thousands of dollars in sales, the animals were purchased by Fountain House to breed and sell, and the staff entered them into shows and competitions, which helped increase sales. Around 2008, when the breeding market faced a downturn, the organization turned to selling the alpacas’ fiber to ensure the animals’ financial viability. 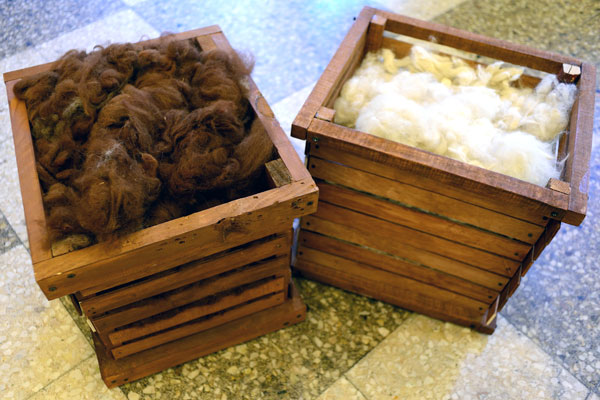 A box of fiber and fleece at Fountain House in New York City waiting to be spun. 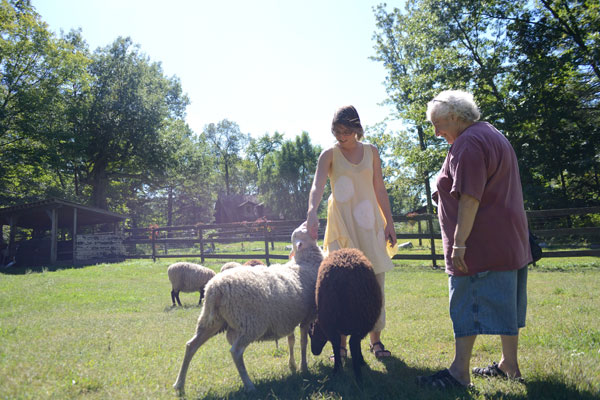 The farm now works with a local co-op that spins the fiber and creates garments, some of which the organization has sold at the Fountain House gallery, at the organization’s headquarters in Manhattan. Recently the farm has introduced Finnish sheep to the brood, so that they can add their fiber, or fleece, to the yarn. Fountain House staff are also teaching members to spin the fiber themselves.

Aliza Koszuk, 48, a new member and avid crocheter, is planning on learning to hand spin. At the farm on a recent weekday, she was part of a small group of members who had driven up from Manhattan to pick apples for cider, and afterward, she fed the alpacas. It was only her second time visiting the farm and feeding the animals, but she was already showing another member where to find their food and the describing the best way to compel the often nervous creatures to approach.

After years of hospitalization for her bipolar disorder, Koszuk says she is “trying to build a life for myself that’s valued. I’m trying to fill my life with things that I love,” including nature and animals. “I foresee myself spending a lot of time here.”

I would like to visit the farm. I moved to sussex county recently…i am on SSD for BPD (mixed episode bipolar disorder) and anxiety/depression…i am often emotionally disabled
I love farms and animals…i am a dog/cat groomer…schooled and seasoned…very depressed….i need therapy but cant afford a therapist but animals are my true therapy. I need to br around more animals to build up my self esteem and stop feeling sorry for myself…i can help around the farm…i am smart and competent…please let me know if and when i can drive up and visit