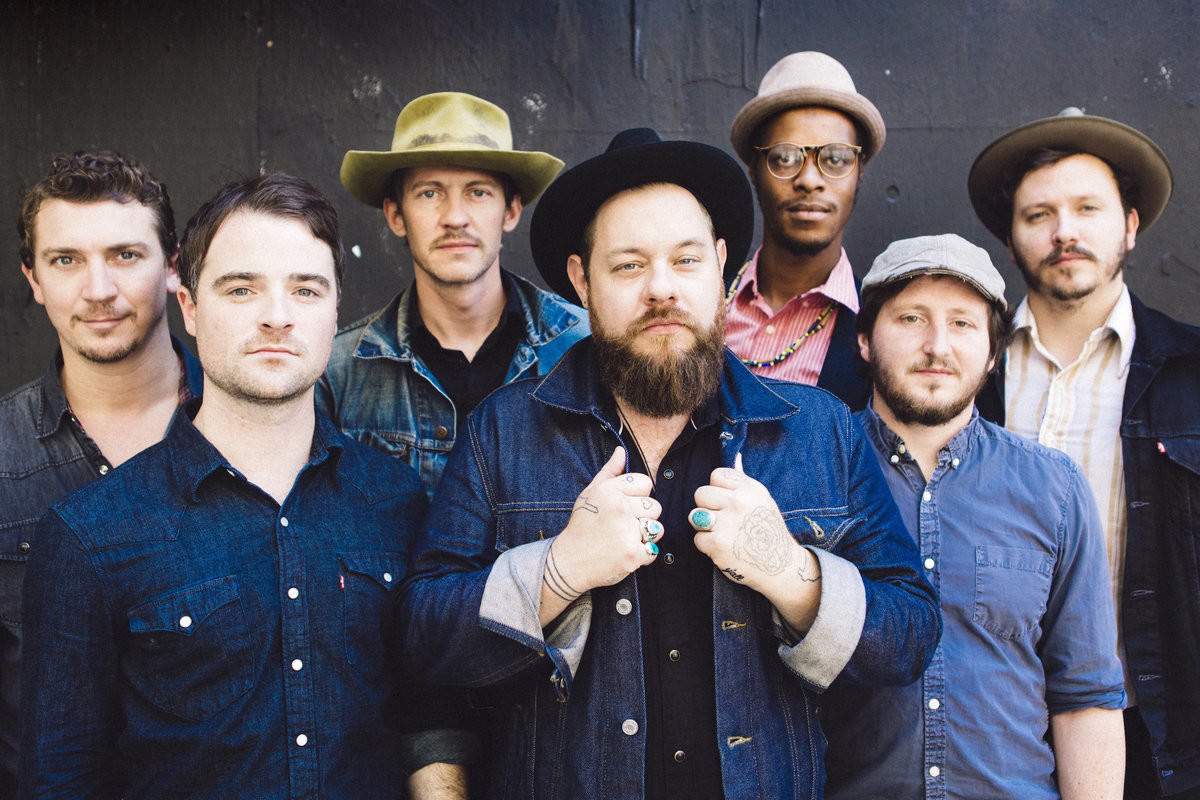 If soul is defined by resiliency in the face of hard times, secular testifying, and the ability to help transform pain into joyful dancing, then it makes total sense that Nathaniel Rateliff’s newest endeavor would be a soul-drenched, R&B-inflected record with echoes of his heroes – Otis Redding, Sam & Dave, Sam Cooke, but also The Band and Van Morrison – melded with the sometimes dark themes he’s known for writing about.

Rateliff has always made music about hard times and hard luck, broken hearts, and empty bottles, but where his earlier work was of the brooding singer-songwriter genre, the new self-titled album with his band “The Night Sweats” defies you not to dance your ass off. Oh, and you should pretty much plan on having “S.O.B” stuck in your head for a good long time after your first listen to the song.

“It’s something I’ve wanted to do for a long time. The singer-songwriter stuff we’ve been cranking out for seven or eight years; honestly, it’s kind of nice to take a break from it,” Rateliff tells Modern Farmer by phone from a hotel room outside of Ashland, Colorado.

Rateliff was raised in rural Missouri farm country, and says it’s a shame to see how much farming has changed since he was a kid. He grew up in a poor but loving family that made music together, grew their own vegetables, and hunted.

He says what may seem an abrupt shift into the new sound was something he’d wanted to do for a long time but hadn’t been able to figure out how to do.

“I wanted to do soul and R&B and still write about the same kind of content I’ve always written about,” he says.

He got some major credibility after signing to Stax Records, the legendary recording company that was home to Otis Redding and Booker T & the M.G.’s, among others. Rateliff says he’s “honored to be a part of a roster that’s included so many legendary artists and musicians who shaped music and changed what music is.”

Rateliff says he assumes there are some of his older fans may be surprised by the shift but, “there’s more people who like what we’re doing now than what we’ve done before.” If a recent performance on The Tonight Show is any indication, he has nothing to worry about. Jimmy Fallon seemed genuinely enthralled with the band that received a standing ovation from the crowd.

The folks over at Farm Aid are fans as well, although due to scheduling conflicts, Rateliff hasn’t played any of the organization’s events, yet. They’re hoping to get him and the Night Sweats to play an event next year.

It’d be a good fit: Rateliff was raised in rural Missouri farm country, and says it’s a shame to see how much farming has changed since he was a kid. He grew up in a poor but loving family that made music together, grew their own vegetables, and hunted.

“Dad and I had a garden. Mama canned vegetables. Me and dad would hunt squirrels, rabbit, and deer,” he recalls. He says looking back he wished he’d joined Future Farmers of America since they had classes that taught skills in welding and “all sorts of cool stuff.” Instead, after the tragic death of his father in a car accident, Rateliff quit school and went to work full-time.

After a stint at a plastics factory, he and his best friend moved to Colorado, and Rateliff got a job working for a trucking company where he spent a decade before becoming a gardener. Through it all, he continued to play and write music. Now able to make music full time, Rateliff, who is based in Denver, is thinking about the future.

“I still have a bunch of songs we didn’t record for this album so I’d like to put out another Night Sweats record, and then just see how everything goes,” he says.

Popular
7 Smokable Plants You Can Grow That Aren’t MarijuanaBrian Barth
How to (Actually) Get Rid of Fruit FliesEmily Baron Cadloff
What to Do With an Abundance of PeppersShelby Vittek
Yes, the Government Really Does Stash Billions of Pounds of Cheese in...Emily Baron Cadloff
6 Differences Between Llamas and AlpacasAndrew Amelinckx
Explore Modern Farmer
Related
Food & Drink
‘Tis the Season For GleaningCrystal Sands
Plants
This Seed Detective Travels the World Tracking Down Lost CropsEmily Baron Cadloff
Books, Cookbooks
In Her New Book, Molly Yeh Goes Back to BasicsEmily Baron Cadloff
Food & Drink, Plants
In Awe of the PawpawDanny Childs
wpDiscuz
We use cookies on our website to give you the most relevant experience by remembering your preferences and repeat visits. By clicking “Accept”, you consent to the use of ALL the cookies.
Cookie settings ACCEPT
Privacy & Cookies Policy