Why Would Anyone Harm an Alpaca? - Modern Farmer
Animals, Plants

Why Would Anyone Harm an Alpaca?

It's a simple question with complicated answers. 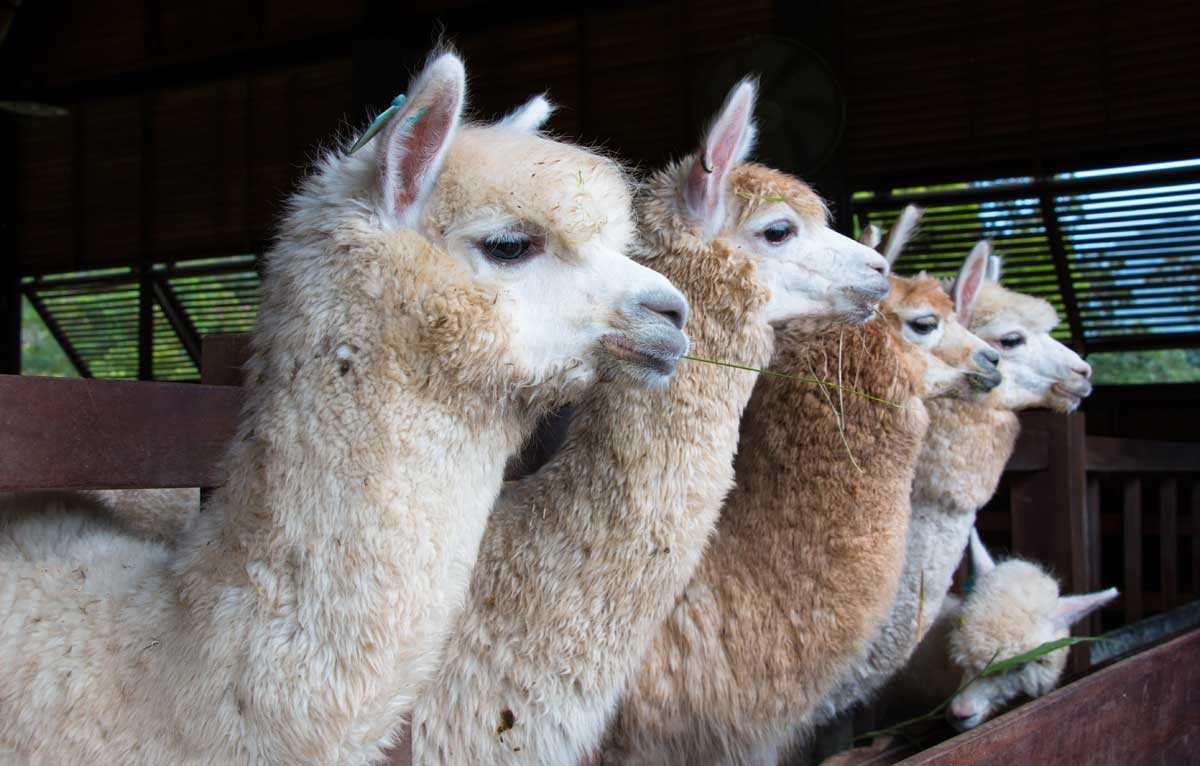 Economics, failing health of owners, and the deviant behavior of violent criminals, experts say, all contribute to a range of abuses inflicted upon the gentle and stoic alpaca.

For instance, a young man armed with malicious intent might sneak onto a farm under cover of darkness, then willfully attack a trusting and unsuspecting alpaca.

Or, a new alpaca breeder, looking to cash in on alpaca fleece popularity, might have over-invested in a herd and now finds caring for the animals too difficult a task to manage. The animals are left to starve or suffer in the cold.

Or perhaps due to owner death, hospitalization, or divorce, alpacas are left to fend for themselves, never mentioned in wills or legal settlements. They are alone without someone to care for them.

Not matter the cause, one thing is certain: The abuse is never justified or defensible.

“There’s no way to explain abuse,” says Jackie Glover, co-owner of Cross Creek Alpaca Rescue in Tonino, Wash. “They’ve put their trust in [humans], and we’ve let them down.”

The rescue business is only getting busier. Now that struggling alpaca owners know they have options, Cross Creek and the handful of other alpaca rescue farms across the country are in high demand.

Canadians for Animal Welfare Reform defines animal cruelty syndrome as either passive or active. Passive cruelty is willful neglect, like shirking care for alpacas or allowing them to starve. Active cruelty is more brutal, like a deliberate attack on an animal that often results in its death.

Alpaca cruelty, according to Cross Creek’s owners, is predominantly passive. Rescue farms, like the one Glover and co-owner Shari Bond run, are able to take in abused alpacas, nurse them back to health, and find caring new homes for the animals.

Alpacas arrive at Cross Creek from a variety of situations. In some instances, neglectful owners are turned in by friends or family. In others, the owner, perhaps duped by an over-inflated market for alpaca fleece, realizes he’s in over his head and asks Cross Creek for help.

Sometimes, the cops are involved. In what might be the highest profile case of alpaca abuse on record, authorities seized 175 emaciated and near-death alpacas from an Oregon ranch in 2014. In space enough for 20 animals, 235 alpacas had been crammed. The herd lived without grass or hay, and resorted to stripping bark from fir trees for nourishment, which killed some of them. When Polk County Sheriff’s deputies came to confiscate the animals at Jocelyn’s Alpaca Ranch, owned by Jocelyn and Robert Silver, they found 17 dead alpacas on the premises. The owners eventually faced animal neglect charges: Jocelyn Silver received three years probation; Robert Silver received three years in prison.

Trying to find out why the alpacas under Cross Creek’s care were abused is a waste of energy for Bond and Glover, they say. But when they talk to owners, “in their minds, they justify it in a way,” Bond says.

Alpaca rescue organizations need your help. There’s not much money to be made in alpaca rescue, and the work of farms and ranches like Cross Creek is paid for by private and adoption donations.

Needs on rescue ranches run from medical supplies to hay to fencing material. If you live near a rescue ranch, consider finding out what kind of materials are most needed, or perhaps donate cash or gift cards to their efforts.

The blog 1000 Things Alpaca has a list of alpaca rescue groups around the United States. Find the one closest to you and reach out.

Cross Creek also offers an alpaca foster program. With a monthly pledge, you can help care for an unwanted, unadopted alpaca housed at Cross Creek.

Alpaca neglect, like in the Oregon case, occurs when humans think of animals as “only animals,” says Leslie Irvine, professor of sociology at the University of Colorado, Boulder. “But I find it hard to see how anyone could look at dead animals and think they are not suffering…This can easily happen when living creatures are turned into commodities.”

Alpaca attackers might think it’s drunken fun to hurt the animal, like what appears to have happened in Lancashire, England, this August, when two men hurled lawn furniture at a pair of alpacas kept as pets at a nursing home.

Others think alpaca abuse is a sick sport, like the Connecticut men who killed four alpacas in 2011 by luring the gentle, puppy-like animals to a fence and stabbing them. The act was but one of the young duo’s many “mischief trips.” One attacker got six months in jail, the other was placed in a rehabilitation program.

“People intentionally inflict harm for many reasons,” says Irvine. “They do it to feel powerful over the animal and to demonstrate their power to other people. People will also justify harming animals by saying they’re ‘only animals’ or the animal ‘deserved’ it, in some perverse sense.”

In the case of the Connecticut killers, as well as an Ohio duo who beat to death a prized alpaca named Masterpiece in 2010, the only explanation is pure malice.

On the upside, animal abuse is being taken more seriously by state governments and federal law enforcements. States, including New York and Tennessee, have created animal abuser registries. Beginning January 1, 2016, the FBI begins considering animal cruelty a ‘Group A’ felony like kidnapping and murder, and starts tracking attacks in its National Incident-Based Reporting System, creating much-needed data on the scope of animal abuse in the U.S.

For Cross Creek, the rescue business is only getting busier. Now that struggling alpaca owners know they have options, Glover explains, Cross Creek and the handful of other alpaca rescue farms across the country are in high demand.

“In the beginning, we could go months [without getting a call],” Glover says. “Now, there’s one every day.”