Seattle chef Kurt Timmermeister wanted little more than a rustic retreat when he bought four neglected acres on nearby Vashon Island. Then a cow named Dinah changed everything. 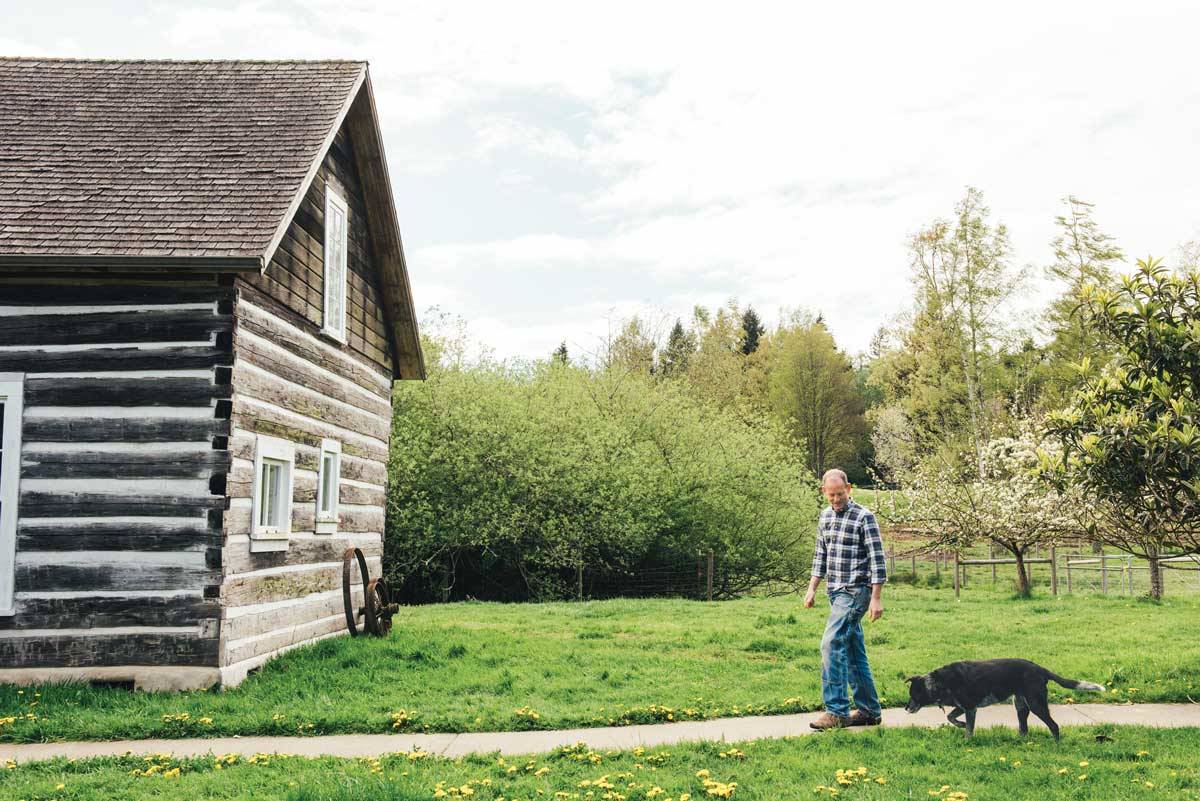 On the list of Plan B fantasies, opening a restaurant, writing a book, and becoming a farmer typically rank high. At the age of 24, Kurt Timmermeister had already checked off the chef box, and he’s since published two memoirs, but the dairyman had absolutely no agricultural ambitions when he purchased four acres on Washington State’s rural Vashon Island in 1991.

“I’m pretty sure I’d never even seen a cow close-up,” Timmermeister admits. At the time, he just wanted an affordable piece of land near his Café Septieme in Seattle, a short ferry ride away. The plot he bought was overrun with blackberry bushes and old cars; a crumbling 1880 log cabin threatened collapse; a chicken coop served as the main house. “I thought it was romantic,” Timmermeister says. “My friends were dismayed.” 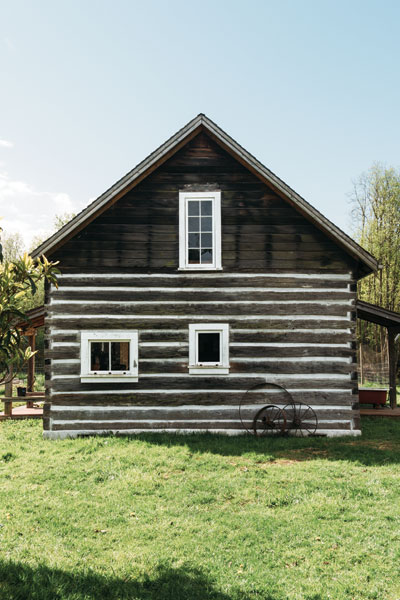 It took Timmermeister a decade to return his 1,000- square-foot primary residence to its former 19th-century glory.

His early and tentative forays into farming read like a series of comical city-boy-goes-to-the-country episodes, including failed attempts to chop wood, clueless visits to the John Deere dealership, and several disasters in beekeeping. “Today, people have YouTube to teach them such things; back then, I was going by books and a lot of trial and error,” says Timmermeister, who eventually chronicled his adventures in 2012’s Growing a Farmer. While living in the cold, moldy chicken quarters, he cleared the fields and restored the 1880 log cabin. “It took a decade because I kept running out of money, but now it’s amazingly beautiful.”

After 12 years as a weekend hobbyist with expansionist tendencies (Timmermeister acquired eight adjacent acres along the way), he sold his Seattle restaurant, providing a five-year financial cushion for his attempt at a full-time career in agriculture. Timmermeister started by growing vegetables – “a catastrophe, he says. “It hits you at the farmers market: I spent this much time on these carrots, and someone’s going to pay $3 for them. I can’t buy lunch for that!” The profit from his first season: $7,500. To stay afloat, the entrepreneur launched a series of Sunday-night dinners in the cookhouse he built on the property, charging guests a premium for food harvested a few yards away (this supper club served as the topic for his 2014 tome, Growing a Feast). 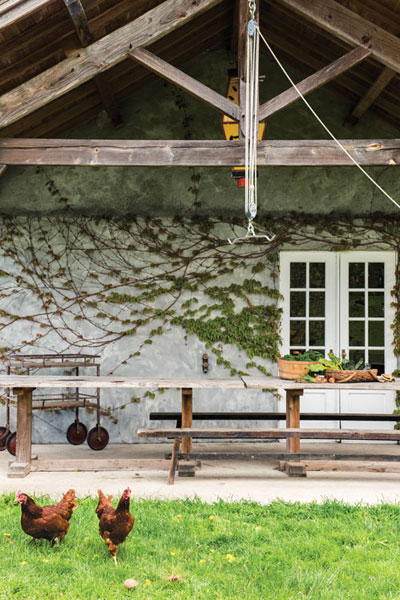 Timmermeister built this stand-alone cookhouse to accommodate a chef-
worthy kitchen. A block-and-tackle for butchering pigs hangs from the roof over the outdoor patio. 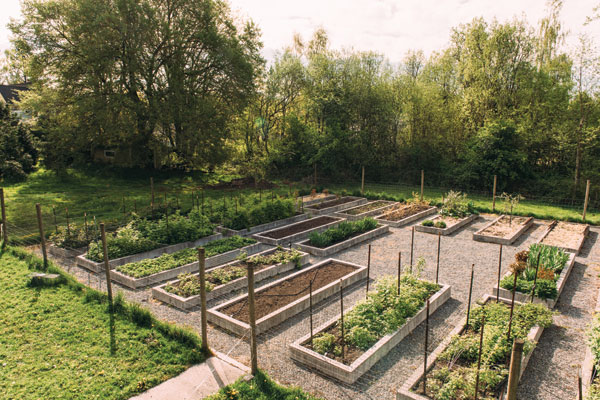 Blueberries, raspberries, and blackberries grow in poured concrete raised beds. A drip-irrigation system delivers water to each of the 28 planting areas.

Then Timmermeister met Dinah, a 3-year-old Jersey cow, and his world turned upside down: “I remember when I went to pick her up, it was a definite sea change. Cow meant farmer.” He came to appreciate the ritual and responsibility of dairy farming, spending nearly two hours a day milking Dinah, until he finally invested in equipment. Fifteen dairy cows later – all Jerseys, which produce a high-butterfat milk – he decided to make cheese.

As with most of his projects, Timmermeister learned how to cut, shape, and age curds the hard way. Eventually, he developed a Camembert-like blend and named it in honor of his first love. “It took three years to become competent at crafting Dinah’s cheese, and I’m still occasionally stumped,” Timmermeister says. “Cheese is one of those remarkable products in which very few ingredients can produce vastly different results.” Nevertheless, he’s expanded his repertoire to encompass a crumbled feta-style cheese dubbed Flora, and LogHouse, an aged tomme-style cheese that celebrates the 19th-century cabin Timmermeister painstakingly renovated.

Despite an obvious bovine bias – “cows are big and important, they have personality” – Timmermeister’s business is based on coldly practical calculations. “I had been involved in restaurants and knew they would pay for a specialty cheese,” he explains. “I don’t make cheddar, I make French-style cheese.” 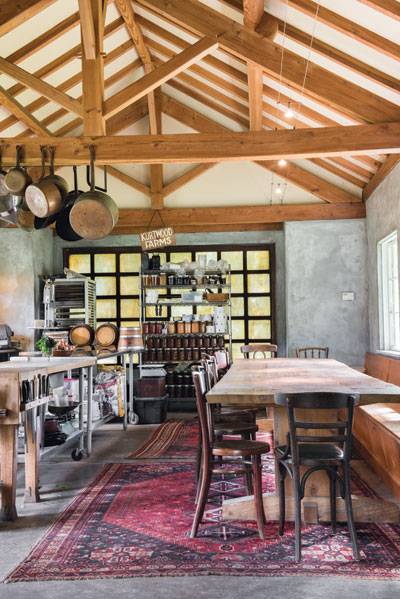 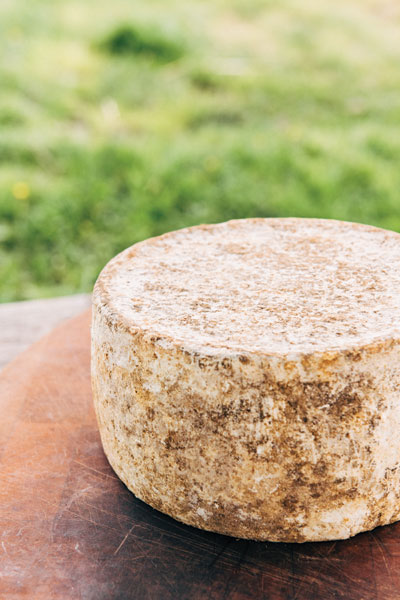 The farmer’s tomme-style cheese is aged 6 months before hitting the shelves at his new Seattle store, Kurt Farm Shop. 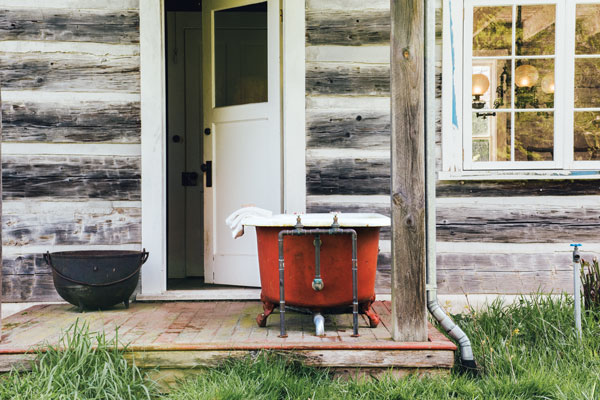 When the weather’s good, Timmermeister enjoys a soak in the claw-foot tub outside the cabin. “That’s inevitably when the UPS guy shows up,” he says.

“Money drives almost everything,” he continues. “Every once in a while you would love to have your favorite cow live on the pasture for five more years, not making milk, but that just can’t happen.” Winters can be especially trying. “If it’s a really wet season, there’s a big part of the pasture that’s covered in mud and manure. It’s hard to not feel a sense of despair.”

This summer, however, things are looking up at Kurtwood Farms (Timmermeister added the “s” a few years in to make the small operation seem more substantial). Four or five employees will be on hand to help tend some 16 dairy cows, a few dozen chickens (whose eggs are used to make custard and ice cream), several pigs (farmed for meat), and 28 raised beds – allowing the proprietor to focus on Kurt Farm Shop, the retail outlet he opened in Seattle on May 1.

Not that Timmermeister has any desire to move back to the big city. He’s currently cultivating raspberries, blueberries, rhubarb, and a whole host of herbs for a new line of ice creams. “Trying out these incredible flavors – that’s what fascinates me at the moment,” he says. And when this accidental dairy farmer must take business calls? He often heads out to pasture, cell phone in hand, to talk amidst his cows. “I like that I’m connected to the land and to the animals and to the seasons. I’ve forgotten what it’s like not to live like that.” 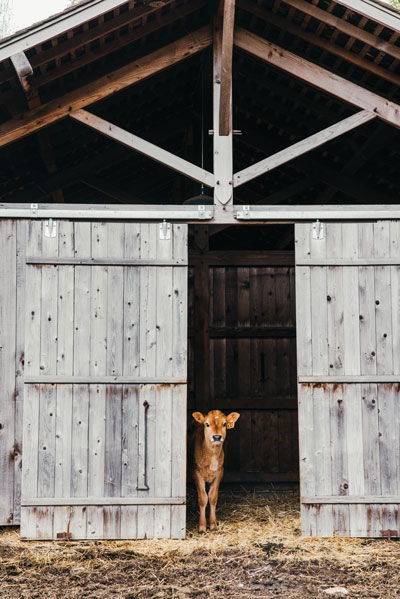 Eight-week-old Holly, one of Timmermeister’s 16 Jersey cows, peers out from the Douglas fir barn, constructed in 2006. 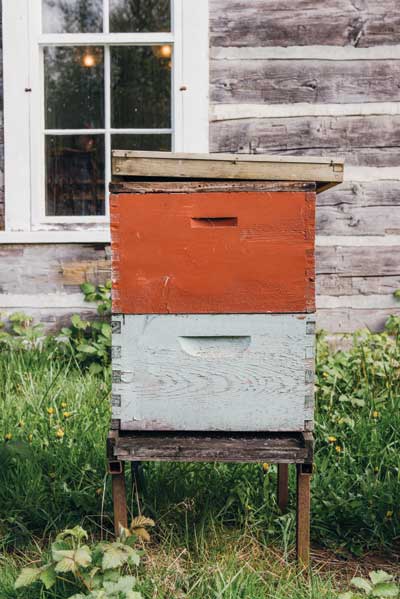 A colorful paint job enlivens one of the farm’s three store-bought beehives, which house as many as 600,000 honey makers. 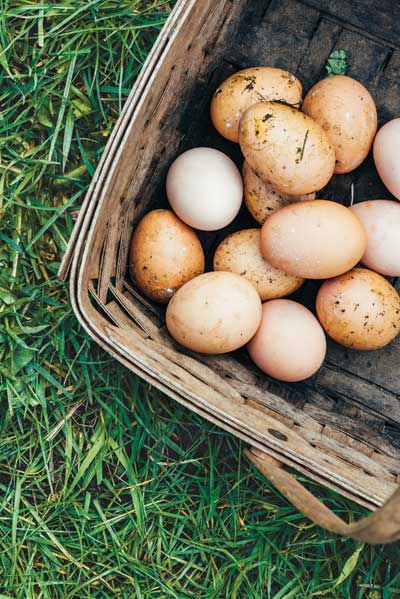 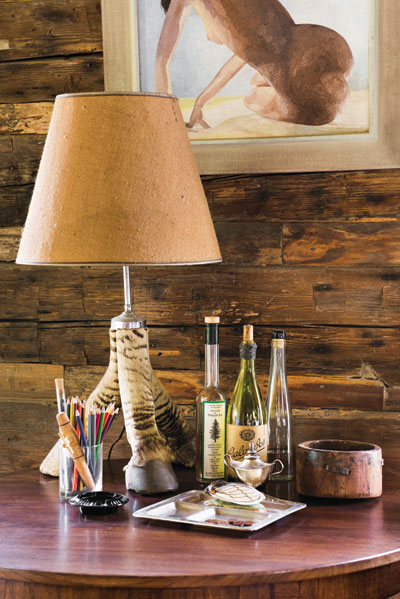 In the log cabin’s living room, Timmermeister hung a painting by his mother above a vintage zebra-hoof lamp scored at auction 20 years ago. “I wouldn’t buy it today,” he admits. 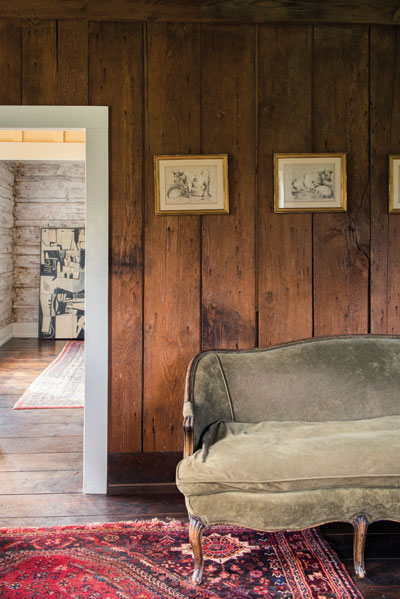 Timmermeister bought his well-loved living-room sofa in 1987 at Bushell’s Auction House in Seattle. “The dog sits on it more than I do,” he says. 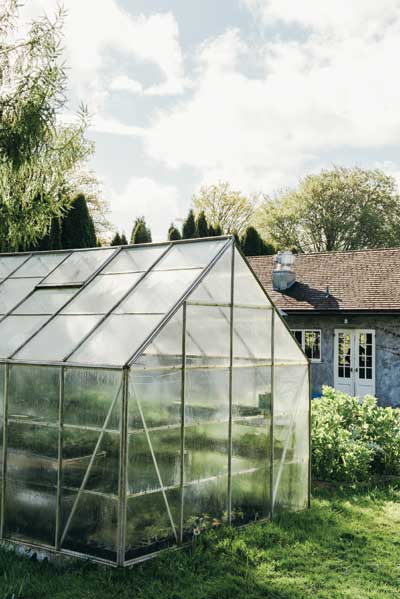 The glass greenhouse, assembled from a kit, gives Timmermeister a jump on the season. 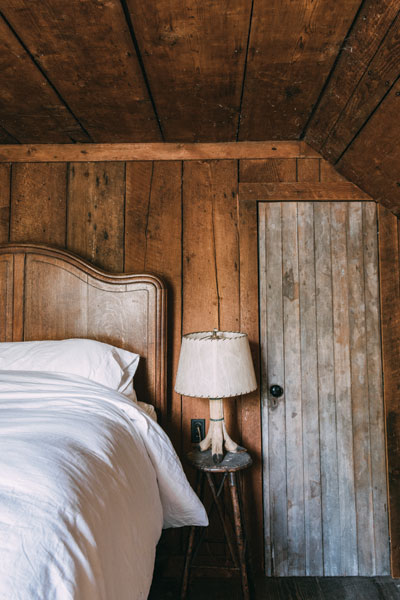 All of the cabin’s paneling and doors are original. “I can stare at the patterns in the planks all night,” Timmermeister says. 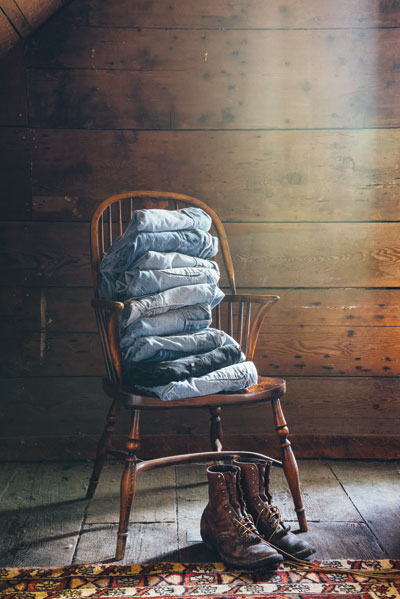 Related
Environment, Opinion, Politics
Opinion: With Sky-High Fertilizer Prices, There’s an Opportunity to Grow Crops More...Kathleen Merrigan
How-To, Water
Rainwater Harvesting Tips for BeginnersEmily Baron Cadloff
Environment, Food & Drink, Plants
What the Future of Almonds Looks Like in a Dry CaliforniaEmily Baron Cadloff
Animals, Plants, Water
Women Are Charting New Paths on Changing WatersCarrie Honaker
wpDiscuz
We use cookies on our website to give you the most relevant experience by remembering your preferences and repeat visits. By clicking “Accept”, you consent to the use of ALL the cookies.
Cookie settings ACCEPT
Privacy & Cookies Policy