With his signature red bowtie and overalls, Farmer Lee Jones seems to have stepped out of a different era, but he’s no throwback. His family’s farm, The Chef’s Garden, has managed over more than 30 years to create a unique business by combining sustainable, age-old farming techniques with cutting-edge technology. They supply specialty and heirloom […] 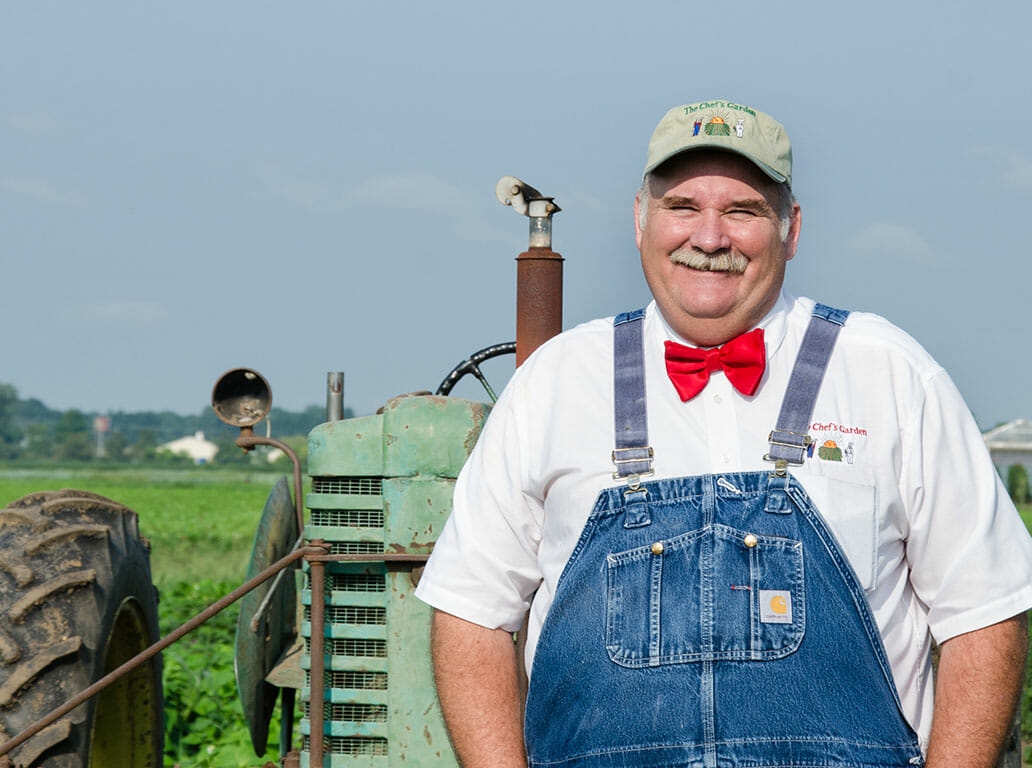 With his signature red bowtie and overalls, Farmer Lee Jones seems to have stepped out of a different era, but he’s no throwback. His family’s farm, The Chef’s Garden, has managed over more than 30 years to create a unique business by combining sustainable, age-old farming techniques with cutting-edge technology. They supply specialty and heirloom vegetables, herbs, edible flowers and microgreens to some of the most famous chefs in the world, and to home cooks, as well.

Back in 1983, following a catastrophic crop failure, Lee, his father, Bob Sr., and Lee’s brother, Bob Jr., turned away from conventional farming and began working hand-in-hand with chefs who were looking for exotic crops at a time when they were nearly impossible to find. And in the spirit of the famous line from the 1989 film “Field of Dreams,” – “If you build it, he will come,” – chefs began flocking to The Chef’s Garden, and continue to do so.

The secret is in the soil. Jones says while they farm 300 acres, only a third of it is planted at a time, with the rest of the acreage planted with cover crops to “help rebuild the soil’s nutrients naturally.”

The family’s dedication to sustainable farming has moved beyond the field and into the forum, with the Roots Conference, now in its third year. The conference series brings together “food luminaries from around the globe to discuss our food system,” says Jones. This year’s event, being held September 21 and 22, focuses on “taking action.”

Jones, a third-generation farmer, says he’s been molded by his influences, which include his father and a few of the most famous chefs around.

“First, my dad, who has a motto ‘The best fertilizer in the world is the footsteps of the grower,’ which simply means know your crops and be in tune with what you are growing,” he tells Modern Farmer in an email. “Secondly, by some great mentors such as Alain Ducasse, Daniel Boulud, Jean Louis Palladin and Charlie Trotter. They taught me to not only look at the plant but to recognize its significance in every stage of growth – from planted seed to flower.”

In 2003, the family launched the The Culinary Vegetable Institute, in nearby Milan, Ohio. It was the culmination of Bob Sr.’s dream. He had envisioned a space where chef and farmer could come together surrounded by a working farm, and away from the restaurant setting, in order to inspire chefs and foster a closer relationship between them and the people growing their food. The institute is now open to the public as well, so more people can have agri-culinary experiences of their own.

When asked what made him want to farm, Lee Jones answers: “I cannot even comprehend that question.” He says, “it’s in my DNA. I couldn’t fathom doing something else.”

According to Jones, his mother picked 80 quarts of strawberries the day before he was born and he was on a tractor with his father as a week-old baby.