Take Two Apples and Call Me in the Morning

A growing number of doctors are telling obese patients to increase the quantity of fresh fruits and vegetables they eat. 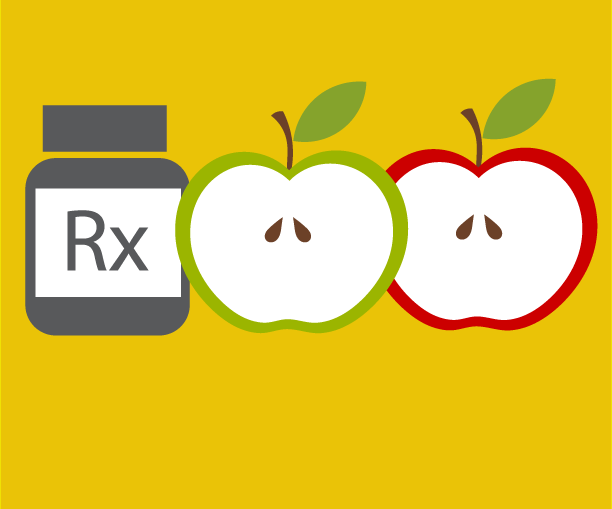 “As much as I’m an advocate for running, you can run all day, but if you have a crappy diet, you will have diabetes,” he says. “Many forms of cancer, dementia, back pain, are all driven by poor nutrition. As a foundation, diet is everything,” says the marathoner, adding that West Virginia is a “very unhealthy state, situated in the ‘stroke belt’ of diabetes, stroke and heart disease, along with Mississippi and Kentucky.”

Increasingly, says Cucuzzella, he is not alone. “My hospital is getting on board. Several years ago when you tried to talk about these things, you would be thrown out of the room, but people realize now the power of nutrition as medicine.”

However, even if more fresh produce is “prescribed,” the advice would go nowhere if patients cannot afford it. Cucuzzella’s Jefferson Healthcare Foundation joined other hospitals and doctors in five states and Washington, D.C., who are supporting the fruit and vegetable prescription program FVRx, which was launched in 2010 by Connecticut-based local food access nonprofit Wholesome Wave. Founded by chef Michel Nischan and former USDA undersecretary Gus Schumacher, Wholesome Wave’s mission is to inspire underserved consumers to make healthier food choices by increasing affordable access to fresh, local and regional food. (You can read more about Nischan and his causes in the Summer ’15 issue of Modern Farmer.)

“Instead of a medicine, I prescribe fruits and vegetables.”

Here’s how it works: Obese and overweight patients get enrolled in the FVRx program by their doctor, then meet with a nutritionist and the doctor to set goals and reinforce healthy eating principles. The doctor collects their health information, such as produce consumption and Body Mass Index (BMI), and issues a FVRx prescription. Participants return monthly to their doctor to refill the prescription and set new healthy eating goals. The prescription amount was determined by research completed through Harvard University in 2013 that said the amount required for a person to eat “healthy vs. unhealthy food” is $1.50/day.

FVRx, launched in Massachusetts and Maine in 2010, begins its fourth year at Unity Health’s Upper Cardozo Clinic in D.C., and its third year at NYC’s Lincoln Medical Center and Harlem Hospital Center, while the Eastern Area Health Education Center/Jefferson Medical in West Virginia will launch in mid-June. To date, says Wholesome Wave, FVRx programs have run in 12 states and the District of Columbia, with 46 partners, 34 health centers and 160 retail sites, including farmers markets.

Wholesome Wave FVRx, in partnership with DC Greens and D.C.’s Department of Health, is now impacting 100 families at four health clinics and farmers market vendors at more than 50 locations. Sylvia Taggart, a family medicine-trained physician assistant at the Upper Cardozo Clinic, says the clinic currently has three FVRx programs at different clinics, some of which are working with special populations such as diabetic patients. Program participants attend a weekly Wednesday night wellness class, where they get education on everything from how to read a food label to healthy cooking demos, as well as group exercise.

“FVRx enables me to practice like I’ve always wanted to in treating children and families with unhealthy weight,” says Dr. Ryan Buchholz, a pediatrician at Upper Cardozo and steering committee member at the Institute for Healthy Childhood Weight. “Instead of a medicine, I prescribe fruits and vegetables. And rather than wish that families could afford to purchase abundant fruits and vegetables every week, FVRx takes away the financial barriers that children from low-income families often face and makes it easy for their families to get fresh produce. Plus, FVRx does so by supporting local farmers. As a result, I am seeing patients and families being transformed – eating well, moving more, and most importantly – moving toward a healthier weight.”

Using a $100,000 USDA Farmers Market Promotion Program grant, Cucuzzella said they are building the SNAP (food stamp) infrastructure at four area farmers markets in Jefferson and Berkeley counties in West Virginia. “We need to have managers on site and create media and marketing materials to reach all levels of clinics and schools, all of the places where they can learn about the FVRx program,” says Cucuzzella, who is leading the project.

In addition, EAHEC will use its grant funds to double the value of SNAP benefits at local farmers markets. “This will increase affordable access to fresh fruits and vegetables for SNAP consumers in Jefferson and Berkeley counties, while also supporting local agriculture,” Cucuzzella said.

In 2013, Wholesome Wave benefited 1,288 adults and children; 54.9 percent of FVRx program participants increased their consumption of fruits and vegetables by 2 cups per week, and most importantly, 41.6 percent of obese children in the program decreased their BMI. Cucuzzella already reports patients who have dropped up to 40 pounds and have dispensed with their medications.

A recent IRS rule change could provide expand the program to more hospitals. Last year, the IRS ruled that nonprofit hospitals throughout the country will be able to claim the help they provide their communities to “ensure adequate nutrition” as a means to qualify for federal tax exemption.